Current Focus List
There are currently no names on the Focus List.
The VoSI Focus List is a compilation and reference list of stocks for which Pocket Pivot or Buyable Gap-Up Reports have been issued and which have been deemed suitable for inclusion on the Focus List. Not all stocks for which a Pocket Pivot or Buyable Gap-Up report has been issued will necessarily be added to the list. It is not intended as a "buy list" or a list of immediately actionable recommendations. Stocks on the list may or may not be in proper buy positions, and investors should exercise discretion and proper judgement in determining when and where stocks on the Focus List can be purchased. The following notes are intended to assist in this process. Please note that members can enlarge the Focus List image by clicking on the body of the email and then holding the Control Key while pressing the "+" key until it is large enough to read.
General Observations:
This past week was one for the records books, as the market posted its worst Christmas Eve decline in history, and then immediately followed that with its best post-Christmas Day rally in history. Thursday then saw one of the market's biggest turnarounds in history, as a -611 point Dow decline reversed in the last 90 minutes of the trading day to a 260.37-point Dow gain. Friday saw another volatile reversal as the Dow went from a 243.01-point gain to a 76.42-point gain in the last hour of trade.

Overall, however, the sell-off since the early October peak has been brutal, not only for the indexes but also for a broad number of formerly leading but now thoroughly busted stocks. The NASDAQ Composite Index, shown below, has been flirting with what the pundits refer to as "bear market territory," but in our view this is meaningless. Once an index has declined enough to reach what is typically considered to be a bear market decline of 20% or more, it is all quite after-the-fact. What we see now is a bear phase and decline that consists of one leg down off the September-October peaks followed by a five-week period of consolidation, otherwise known as a bear flag, before a second leg down began two weeks ago. 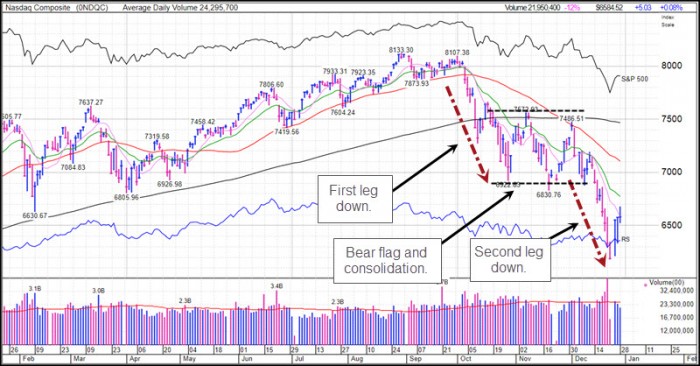 The indexes are now in a three-day rally attempt off the lows of Christmas Eve. We note some similarities between the NASDAQ's action in late 2007-/early 2008 (see chart below) and today. The general patterns and durations of the first leg down, a bear consolidation, and then a second leg down are quite similar.  Following the second leg down in early 2008 in what became the Financial Crisis Bear Market of 2007-2009, the market spent several months chopping back and forth before the third leg down in the overall bear market began in September/October 2008. 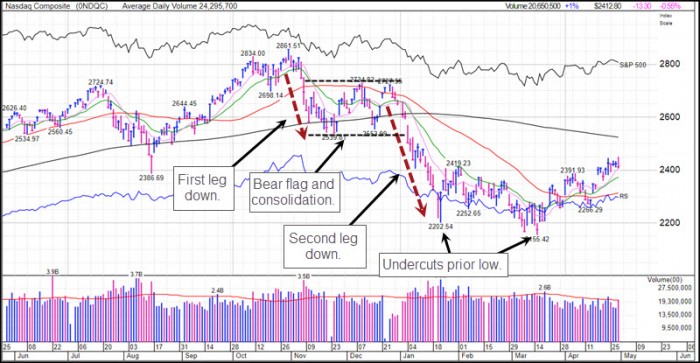 The current breakdown in the general market, that most believe started in early October, was in fact beginning to show its face in late summer. It was at that time that the number of stocks on the VoSI Focus List began to decline. In August, we were down to five names, AMZN, BZUN, FTNT, NFLX, and SQ. By September 15th  that list had been whittled down to AMZN, FTNT, and SQ, and at that time we saw nothing that met our criteria for making the Focus List. This was our view despite numerous emails from members telling us that we should be putting more names on the Focus List. In fact, the lack of stocks meeting our criteria for the Focus List was flashing a very early warning sign of what was to come later in the year.

In addition, another cautionary sign was found in the fact that nearly all of the stocks that we reported on as having Pocket Pivots or Buyable Gap-Ups since the end of summer have had very tepid moves from their pocket pivots or buyable gap-ups. Perhaps the best performer was Exelexis (EXEL), which was more of a bottom-fishing buyable gap-up and pocket pivot situation. 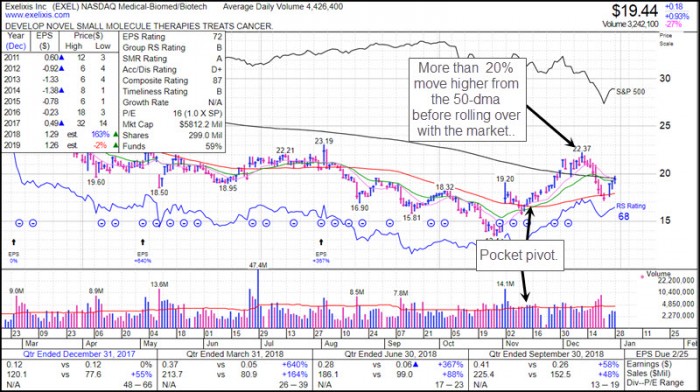 Here we see a Buyable Gap-Up in Lululemon Athletica (LULU) slowly work its way only slightly higher to a new high before rolling over sharply from there. 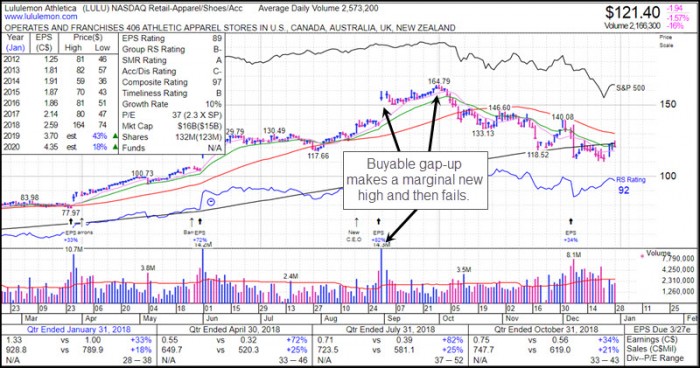 Five Below (FIVE) was another Buyable Gap-Up situation that failed even faster. 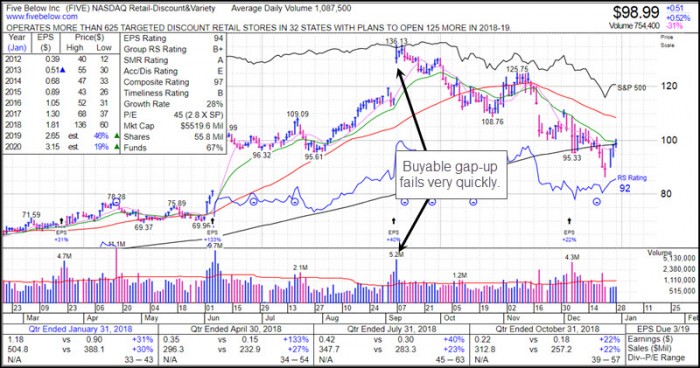 A Pocket Pivot breakout in Echo Global Logistics (ECHO) in September pulled back constructively into its 20-dema as volume declined, but the breakout was short-lived as the stock immediately failed and plummeted sharply lower. 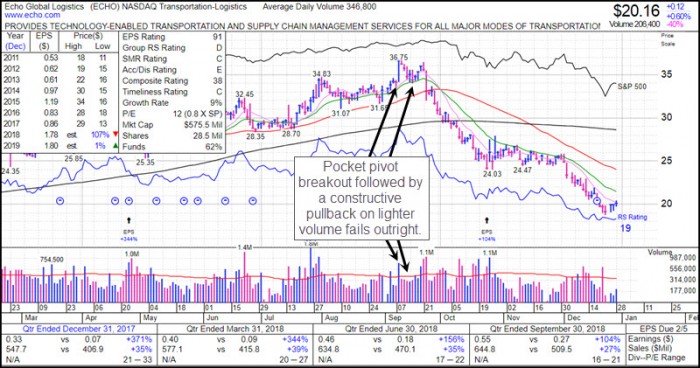 In our October 5th live webinar, Gil Morales warned members that he was seeing a large number of stocks that were flashing warning signals and likely on the verge of late-stage breakout failures. He was quite specific about this, indicating that breaches of the 20-dema would trigger these as short-sale entries at that point. Nvidia (NVDA) is a perfect example of this, and members who have access to the webinar video archives are invited to go back and review that particular live webinar for its prescience with respect to Gil's views at that time.

One will also note that the Market Direction Model went to a sell signal 3 minutes after the open on October 4. It had two additional sell signals, one on October 10 and October 22. All were profitable using 3x ETF TECL. 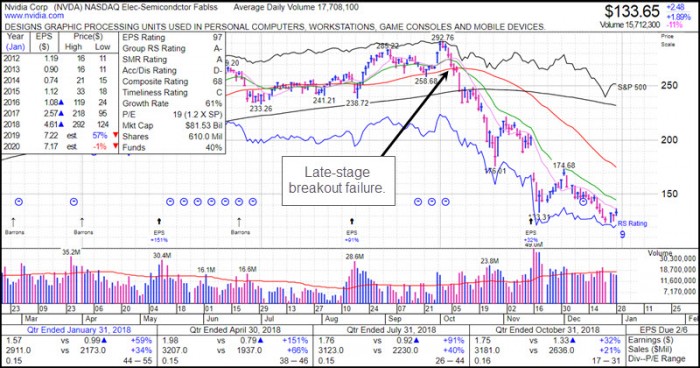 Members should take note of the fact that Pocket Pivots and Buyable Gap-Ups are technical facts that we report on when they occur, but they also serve as barometers of the market's overall health. When these were showing very little tendency to push significantly higher, and in some cases failing outright, that was useful market feedback for those heeding it, both in throughout the final 3-4 months of 2018.

With the markets breaking to lower lows this past weekend and then posting a logical reaction bounce following a severely oversold condition, we may move into several weeks of choppy action. As was the case after March of 2008, this could go on for a period of time, and it may provide opportunities on both the long and short sides of the market as the indexes rise and fall in a long-winded bear consolidation similar to what we saw between March and September of 2008. Markets don't always repeat, but they often rhyme, and it will be interesting to see how 2019 plays out in this regard. Happy New Year!