The VoSI Focus List is a compilation and reference list of stocks for which Pocket Pivot or Buyable Gap-Up Reports have been issued and which have been deemed suitable for inclusion on the Focus List. Not all stocks for which a Pocket Pivot or Buyable Gap-Up report has been issued will necessarily be added to the list. It is not intended as a "buy list" or a list of immediately actionable recommendations. Stocks on the list may or may not be in proper buy positions, and investors should exercise discretion and proper judgement in determining when and where stocks on the Focus List can be purchased. The following notes are intended to assist in this process. Please note that members can enlarge the Focus List image by clicking on the body of the email and then holding the Control Key while pressing the "+" key until it is large enough to read.
General Observations:
Major market indexes all posted all-time highs on Friday as volume declined vs. the prior day. On Thursday the indexes ran into some stalling action on higher volume as a result of what turned out to be fake news regarding Pfizer's (PFE) vaccine deliveries and ongoing wrangling over a possible stimulus bill from Congress. Sentiment has remained extremely bullish, but one cannot call a market top based on sentiment alone. Also, given that the primary driver of this current bull rally has been the Fed, it may be the true “axe” in this market to the extent that it simply overrides traditional measures of sentiment as meaningful indicators. For now, the market trend remains up until further notice. 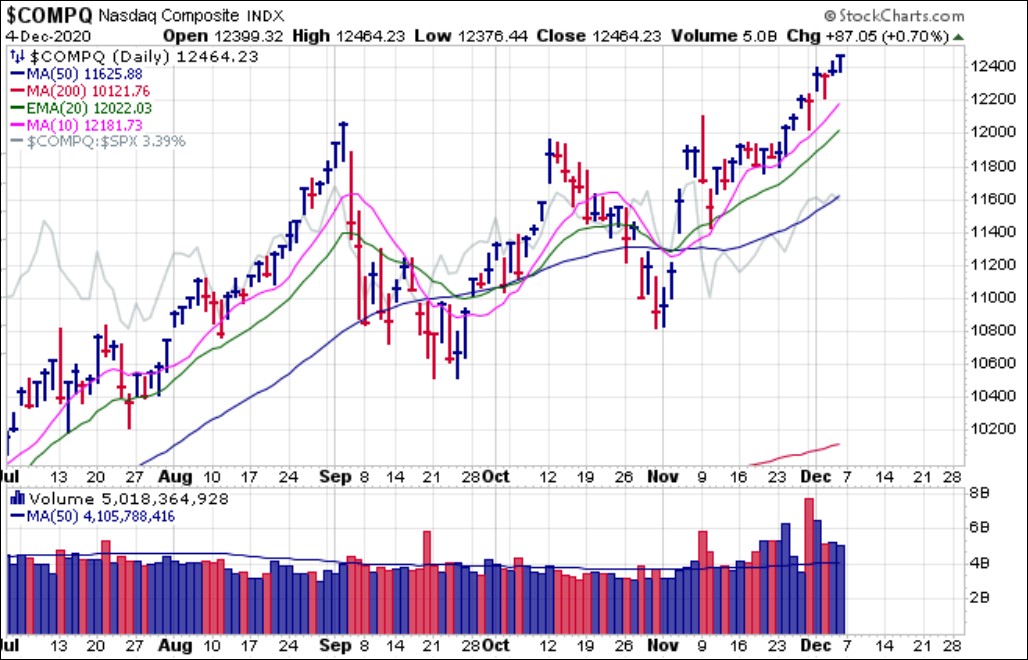 The Market Direction Model (MDM) remains on a BUY signal. With a new stimulus package around the corner together with optimistic vaccine-related news, markets have been moving higher.

Notable Action:
Bitcoin has dominated the financial headlines as it almost cleared the $20,000 level this past week. We noted the near-term climactic move in the Grayscale Bitcoin Trust (GBTC) where we saw the premium over Bitcoin expand sharply, and that led to a severe price break on either side of the Thanksgiving Holiday. News that former Fed member Scott Minerd’s Guggenheim Macro-Opportunities would now have the option of placing up to 10% of its assets into Bitcoin via the GBTC sent both vehicles gapping wildly to the upside on Monday, but both spent the remainder of the week in short consolidations near the prior week’s near-term climactic highs. 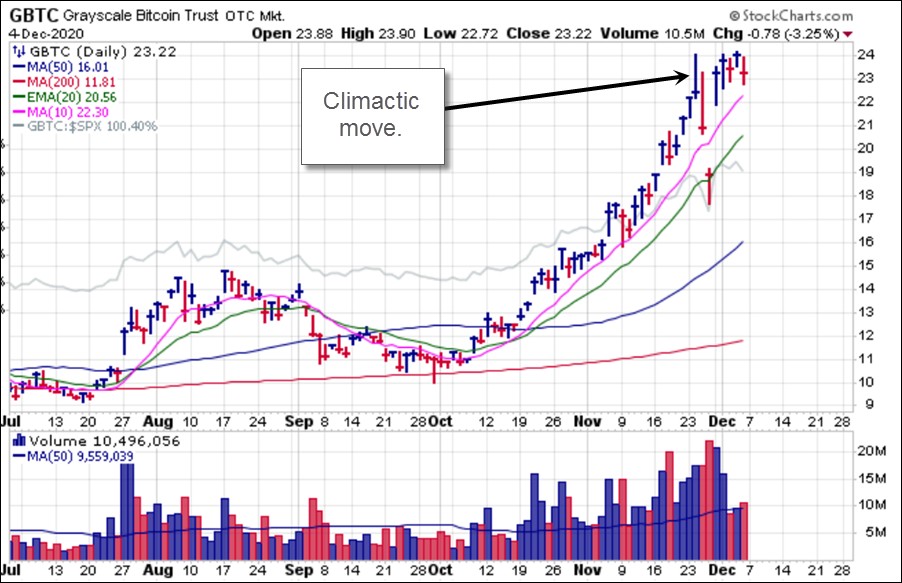 Microstrategy (MSTR) is holding in a tight flag after gapping up through the $300 level and triggering a long entry per Jesse Livermore’s Century Mark Rule on the long side. The stock was looking a bit toppy in a tweezers-top like formation as we discussed last weekend, but that was immediately overrun by Monday’s huge gap-up move through the $300 Century Mark, which can now be used as a convenient trailing stop.

Chinese EV-maker Nio (NIO) has dropped below its 10-dma and 20-dema. Recall that we previously advised in our last Focus List Review report that the 10-day moving average would serve as your selling guide for the stock per the Seven-Week Rule. 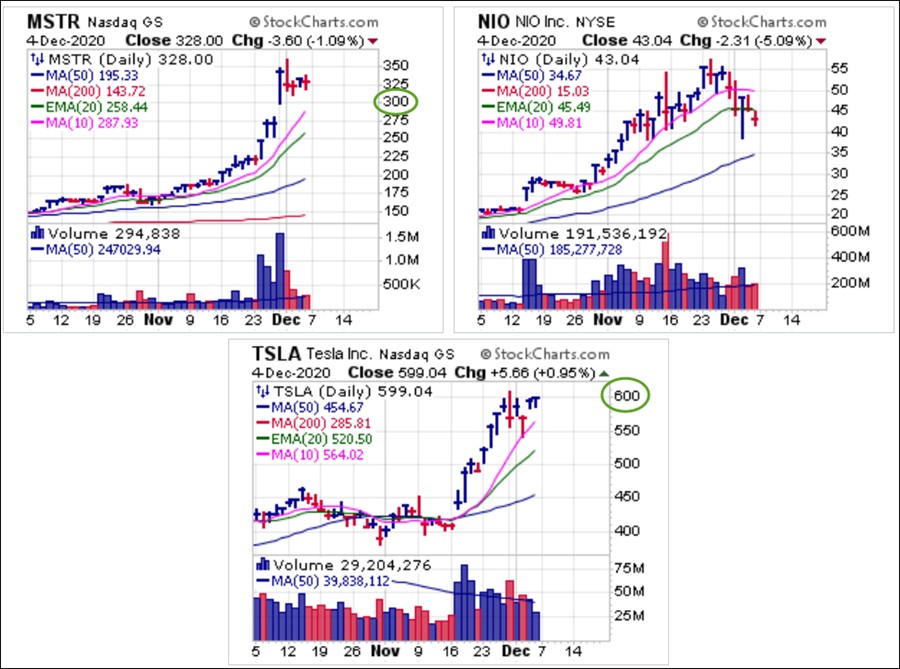 The Sprott Physical Silver Trust (PSLV) is now sitting above its 50-day moving average after posting a U&R on Monday through the 7.75 low of September 24th, which we reported on at the time. Tuesday’s gap-up move also represented another U&R through the 8.07 low of October 29th, although the PSLV was extended on the gap move. We would now use the 8.07 low as a trailing stop. 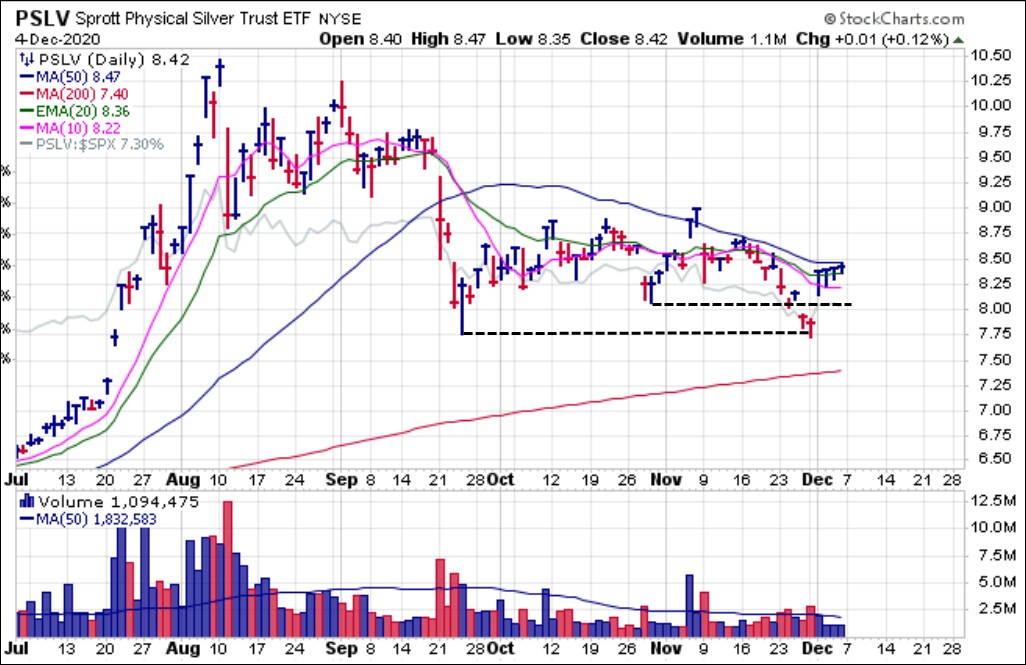 The Sprott Physical Gold Trust has followed its white metal cousin back to the upside, but without posting any kind of U&R move. We find, however, that there are occasions where a concrete long entry signal in one metal can also be used as a long entry signal for the other, despite any differences in the chart patterns. In this case, PSLV’s U&R on Monday also worked in the PHYS as it regained its 200-day moving average, triggering a moving average undercut & rally (MAU&R) at the 200-day line which would also serve as a selling guide. 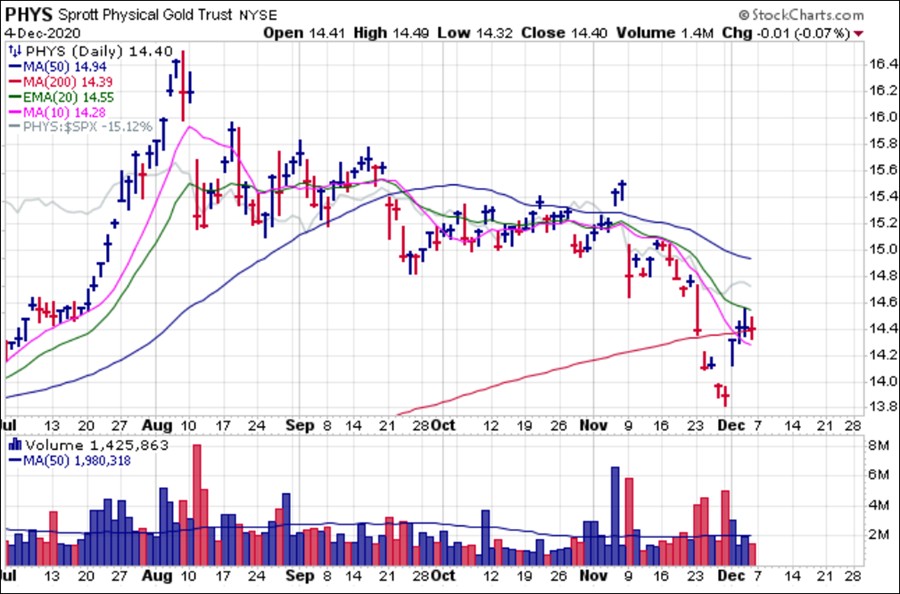 Below is a list of stocks for which we have sent out reports over the past two weeks.

Among these, BZUN is siting at its 20-day exponential moving average where it may offer a lower-risk entry since its prior U&R as reported is still in force. DQ is sitting at its 50-day moving average after failing to hold its 20-dema, where it posted a pocket pivot the prior week. FSLY was reported on as a pocket pivot at the 50-day line on Friday, and it stalled to close just above the line where it remains in a buyable position using the line as a selling guide. NVDA failed to post enough volume for a pocket pivot on Wednesday but has still held support at the 50-day line as volume dried up to -59% below average on Friday. That creates a voodoo entry at the 50-day line which would also serve as your selling guide. 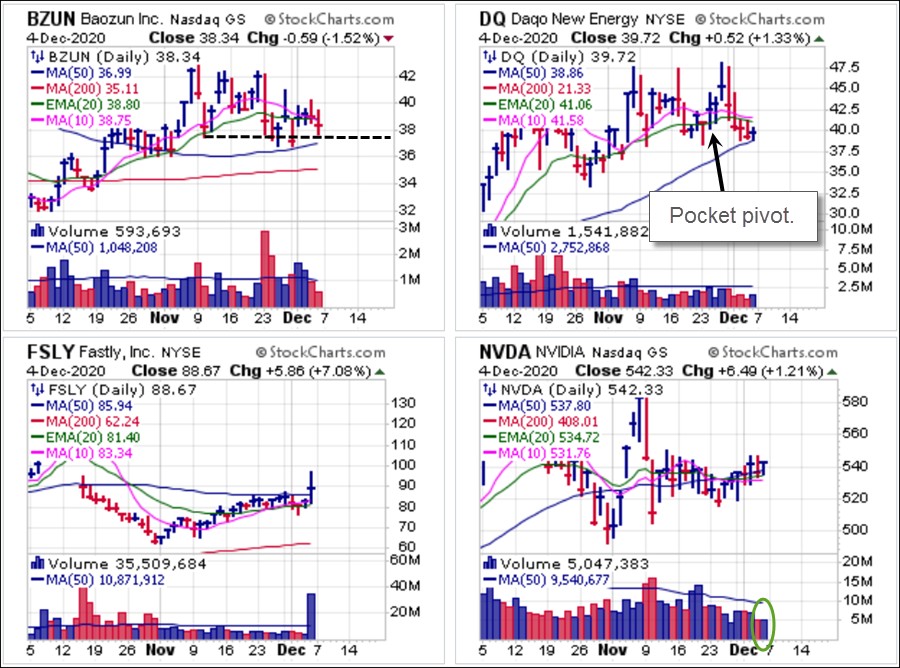 LAC and PLL have both dropped below near-term support. However, LAC tends to find support at its 65-dema, where it closed on Friday, thus could be in a lower-risk entry using the 65-dema as a tight selling guide. PLL dropped below its 50-dma but remains above the 24.51 prior low where it triggered a U&R long entry on Wednesday. This brings it into a buyable position on the basis of the U&R while using the 24.51 price level as a selling guide. We previously reported on PLL as a pocket pivot at the 50-dma two weeks ago but that has since faltered. The U&R presents a fresh entry which is actionable as prescribed.