The general market remains in a correction. A reaction rally off the lows of three weeks ago saw the S&P 500 Index run into resistance near its 50-day moving average and the highs of the prior week before reversing on Thursday. Comments from Fed Governor James Bullard that he believed the Fed should raise rates a cumulative 1% by July 1st sent the indexes spinning to the downside that day. The market broke again on Friday on more rumors of an inter-meeting rate hike from the Fed after it scheduled a closed board meeting for Monday and speculation by the Biden Administration of an imminent Russian attack on Ukraine. 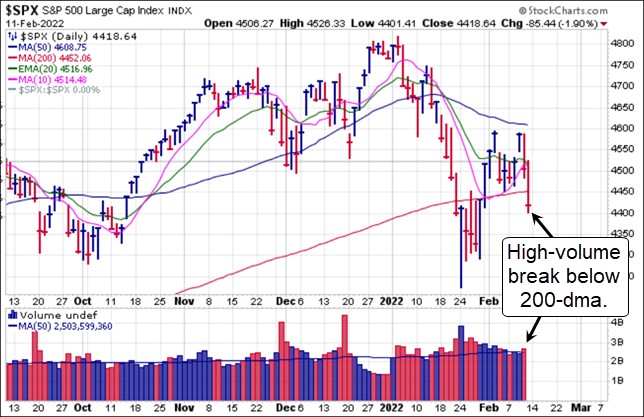 The NASDAQ Composite, which took the brunt of the selling in January, remains in No-Man's Land well below its 200-day moving average. The index broke lower on Friday as it now looks set for a test of the January lows. 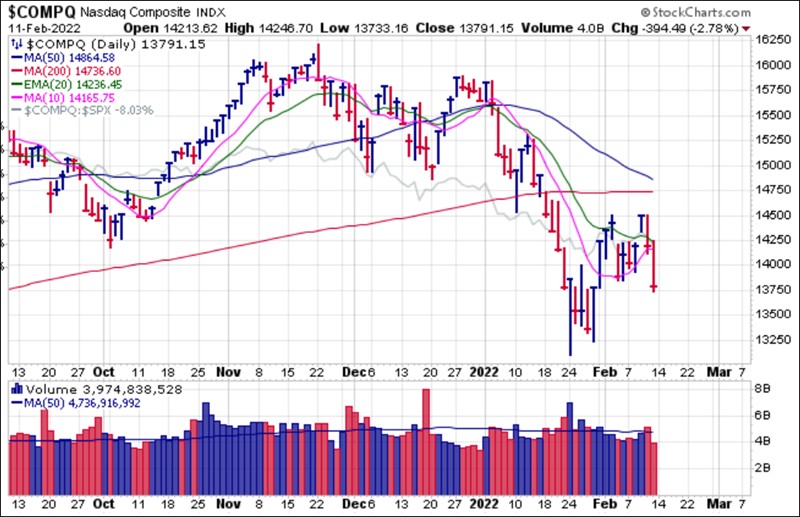 Interest rates spiked sharply this past week as the 10-Year Treasury Yield ($TNX) broke through the 2% level on Thursday but closed just below on Friday. It remains in a very sharp uptrend from the early December lows. 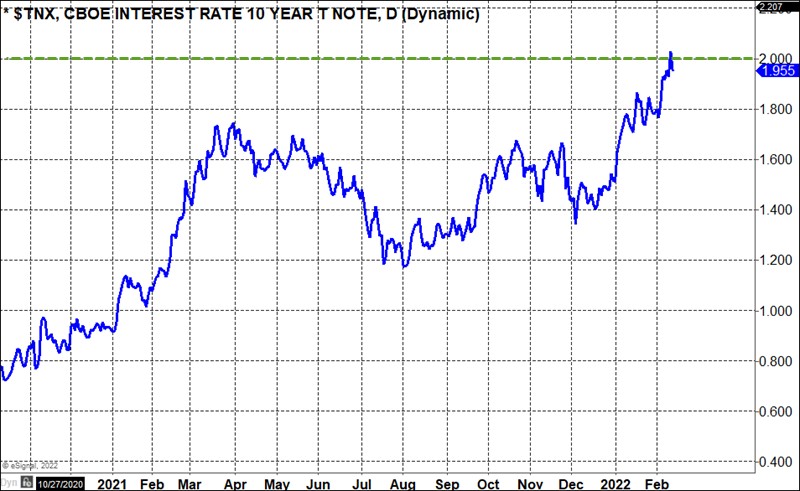 The Market Direction Model (MDM) switched to a SELL signal on Thursday morning, February 10th.
Short-selling is in general a challenging undertaking, and the intraday volatility that we see in this market makes it even more challenging. Persistence is generally required. An example would be Qualcomm (QCOM), which reported on as a short-sale entry along the 50-day line in what was an early, evolving late-stage failed-base (LSFB) type of short-sale set-up. It took a couple of breaks before the stock gave way in a meaningful way. We would now be targeting the prior January low and the 200-day line as our downside price objective from here. 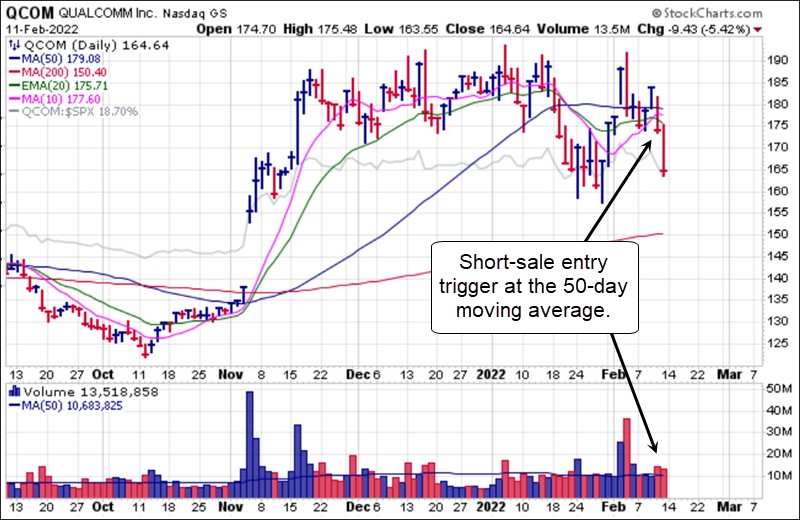 This not unlike the action we saw in two other short-sale targets we reported on several weeks ago on January 5th. Those were semiconductor-equipment makers Applied Materials (AMAT) and Lam Research (LRCX). Both stocks flopped around their 20-demas before finally cutting loose in mid-January and breaking sharply to the downside in high-velocity moves. Following those initial, significant breaks off the peak, both stocks are now working on what appear to be bear flags under and around their respective 200-day moving averages, and in fact also triggered short-sale entries at their 200-day lines on Thursday and Friday.

As we've noted previously, and emphasized during our weekly live market webinar this past Wednesday, the recent rally off the late January lows was likely set to fail, and that is precisely what we are seeing in real-time. Unless one is persistent and nimble enough to play on the short side, cash remains king.
This information is provided by MoKa Investors, LLC DBA Virtue of Selfish Investing (VoSI) is issued solely for informational purposes and does not constitute an offer to sell or a solicitation of an offer to buy securities. Information contained herein is based on sources which we believe to be reliable but is not guaranteed by us as being accurate and does not purport to be a complete statement or summary of available data. VoSI reports are intended to alert VoSI members to technical developments in certain securities that may or may not be actionable, only, and are not intended as recommendations. Past performance is not a guarantee, nor is it necessarily indicative, of future results. Opinions expressed herein are statements of our judgment as of the publication date and are subject to change without notice. Entities including but not limited to VoSI, its members, officers, directors, employees, customers, agents, and affiliates may have a position, long or short, in the securities referred to herein, and/or other related securities, and may increase or decrease such position or take a contra position. Additional information is available upon written request. This publication is for clients of Virtue of Selfish Investing. Reproduction without written permission is strictly prohibited and will be prosecuted to the full extent of the law. ©2023 MoKa Investors, LLC DBA Virtue of Selfish Investing. All rights reserved.
FOR OUR FREE MARKET LAB REPORT :