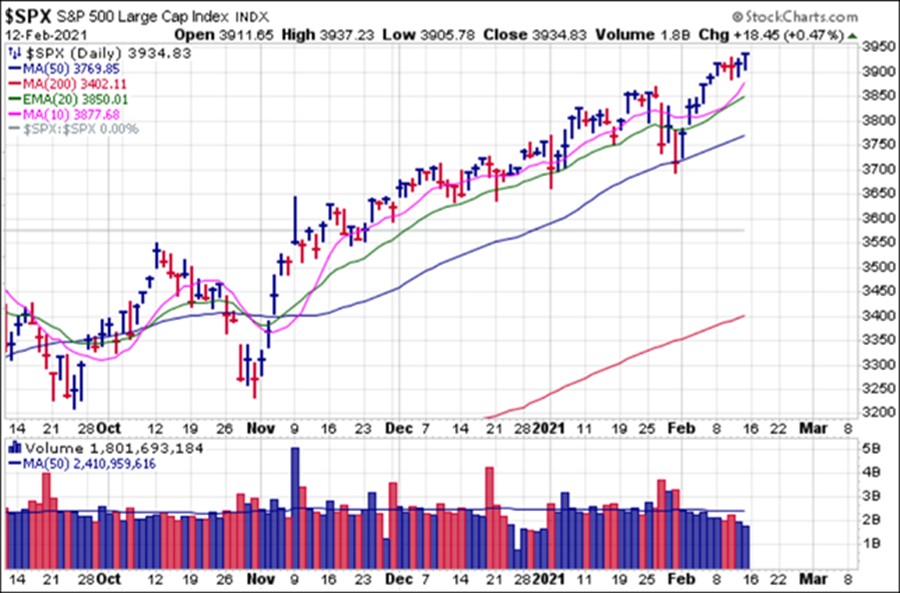 The Market Direction Model (MDM) remains on a BUY signal.
Focus List Stocks Expected to Report Earnings this Week: Nutrien (NTR) on Wednesday after the close.
Notable Action:
Bitcoin remains the big story as it pushed to new highs this past week following news that Tesla (TSLA), another Focus List name, purchased $1.5 billion worth of the cryptocurrency. 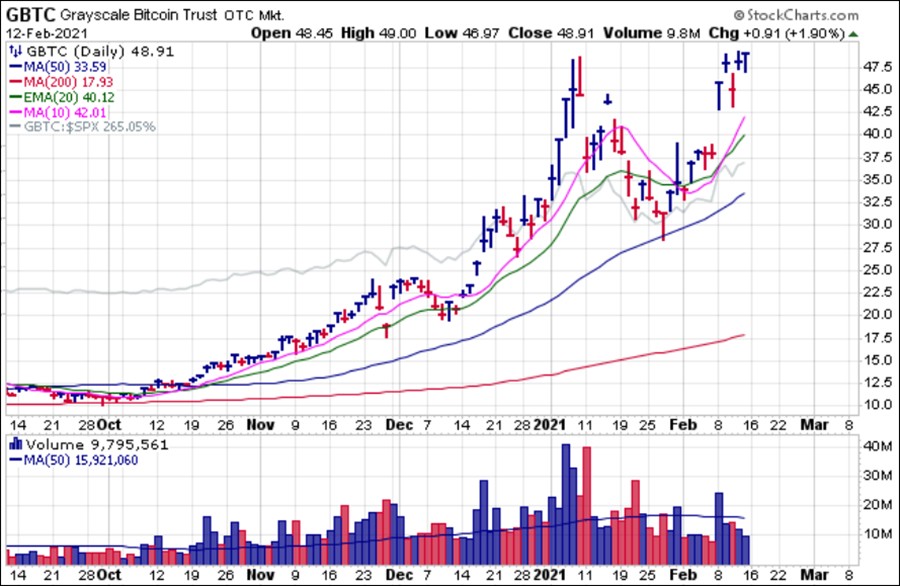 In conjunction with this news, we reported on Buyable Gap-Up moves in Bitcoin miners Marathon Patent Group (MARA) and Riot Blockchain (RIOT) on Monday morning. The stocks then launched significantly higher over the remainder of the week. Both stocks had previously been discussed several times in our live webinars as they were basing throughout most of January and into February, with buy points along the way within the bases. On January 28th we issued a VooDoo Report on MARA as it posted a voodoo pullback to its 20-dema at that time, an early buy point. We then issued a detailed discussion of MARA, RIOT, and The9 Ltd. (NCTY) on February 3rd as additional background on this key group of stocks.

We also reported on another Bitcoin cousin play, PayPal (PYPL), on February 4th when it posted a buyable gap-up after earnings. The stock has since continued higher on the additional Bitcoin news this past week. The bottom line is that if members are not participating in any of these names it is not due to a lack of reporting on our part. We don't flood members email inboxes with a constant flow of reports, preferring instead to exercise greater selectivity as we prefer quality over quantity. 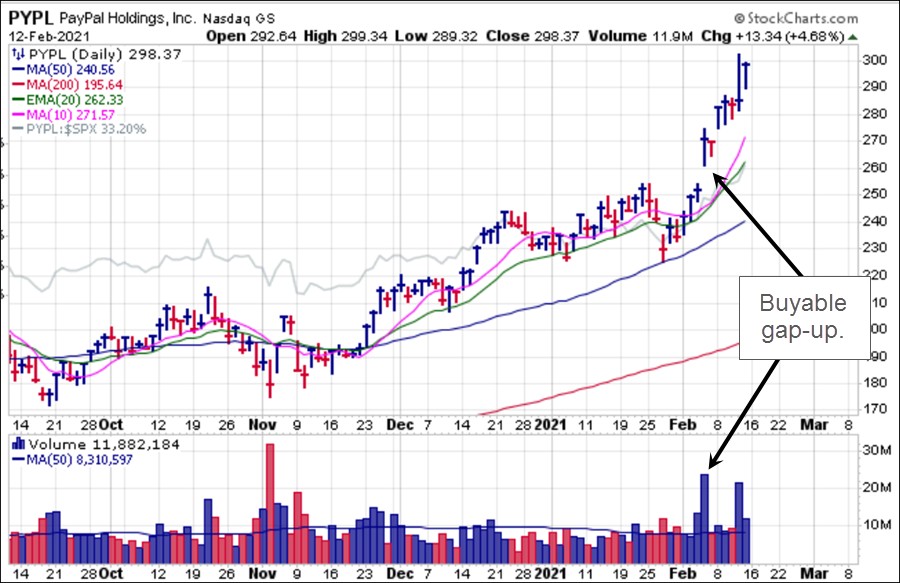 Meanwhile, Tesla (TSLA) remains in a five-week base after selling off on the news that it bought $1.5 billion worth of Bitcoin. Investors apparently do not share the same enthusiasm for the company's Bitcoin purchase as the media pundits did, but the stock remains in a base where investors can watch to see how the stock acts around the 20-day exponential moving average. A move above the line would trigger a moving average U&R and long entry if it occurred. 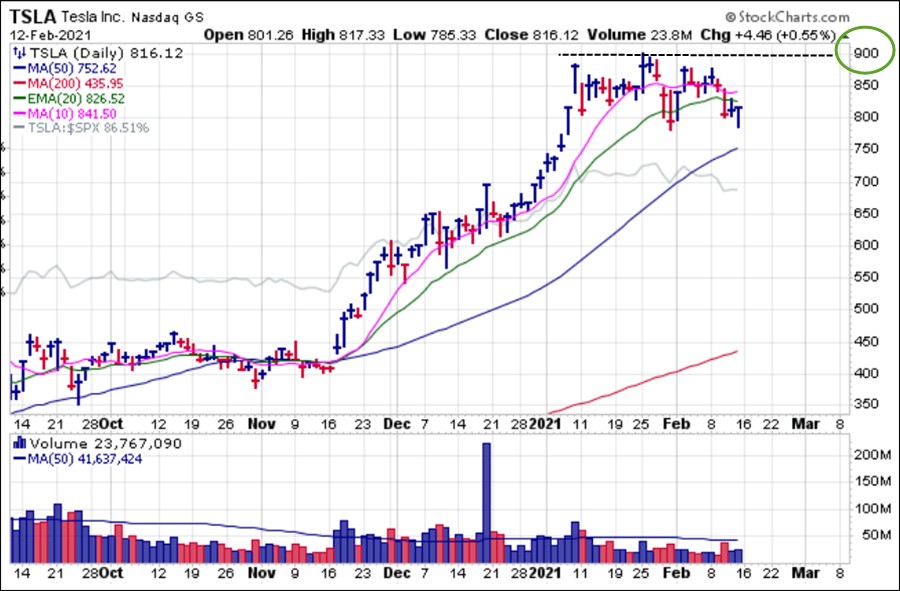 Microstrategy (MSTR), the first company to buy significant amounts of Bitcoin many months ago, has been a mainstay of our Focus List and has looked climactic at several stages of its epic price run in 2020 and into 2021. Most recently it posted nine straight up days in a row with Tuesday's price range being the largest point spread seen in the stock's history. 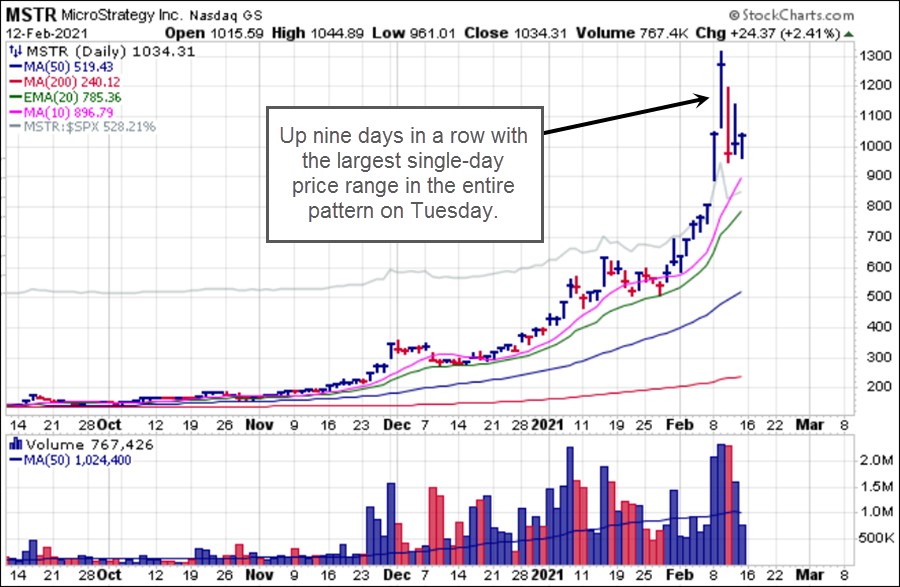 The Sprott Physical Silver Trust (PSLV) is tracking tight sideways along its 10-day moving average. This is occurring in a position where it has broken out of a low-base price range extending back to late September with resistance just above at the August highs. This appears to be in a buyable position using the 20-dema as a maximum selling guide. 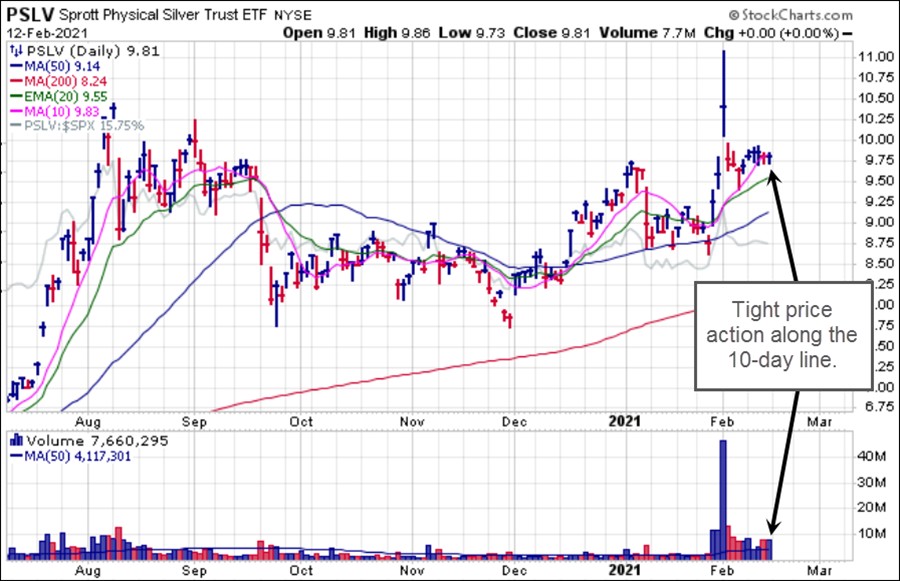 The Sprott Physical Gold Trust (PHYS) is lagging its white metal cousin and remains in a six-month downward trend channel after posting a U&R last week. That U&R remains in force using either the mid-January low at 14.33 or the December 15th low at 14.26 as selling guides. 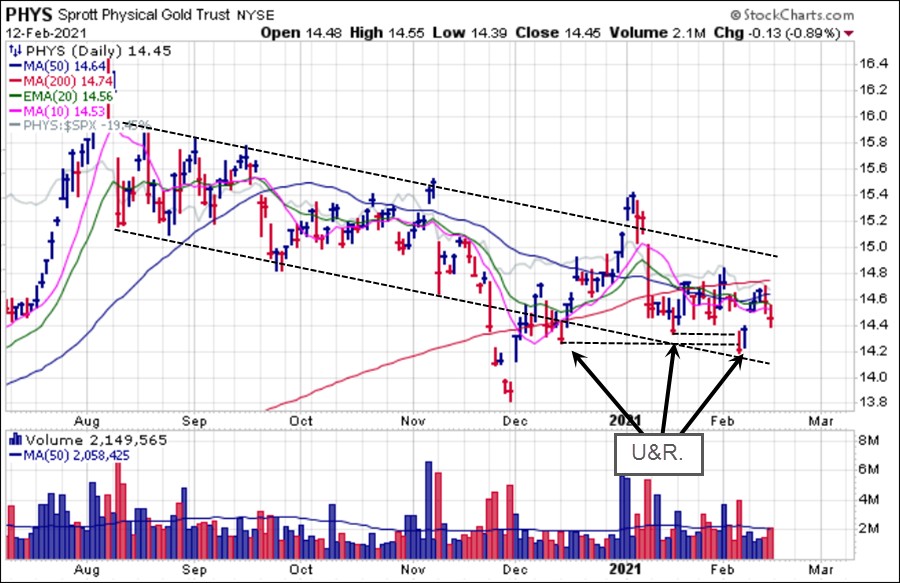 Apple (AAPL) suffered a sharp sell-off after earnings in late January but has stabilized along its 10-dma and 20-dema. The stock closed just above the 20-dema on Friday as volume dried up to -45% below average, low enough for a voodoo pullback to the line that is potentially buyable using the 20-dema as a tight selling guide. 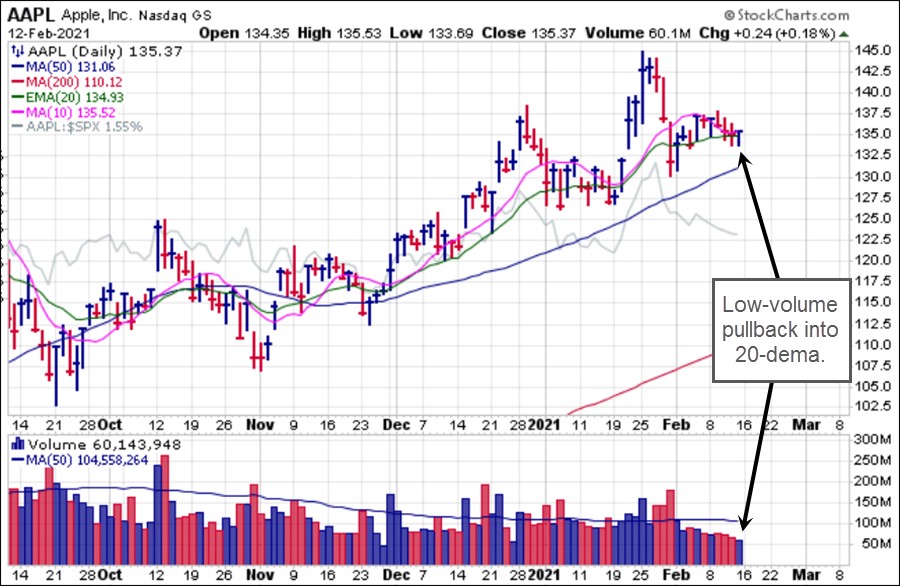 The market remains fluid with many pundits citing the historical extremes in a number of indicators, including market cap to GDP, margin interest, bullish/bearish sentiment, percentage of stocks above their 150-day or 200-day moving averages, etc. We must, however, stick to the concrete in the form of what we see on the stock charts rather than trying to make macro-calls based on historical indicators that may very well have been rendered useless by massive QE liquidity that has been injected into and which remains in the financial system with the promise of much more to come.
This information is provided by MoKa Investors, LLC DBA Virtue of Selfish Investing (VoSI) is issued solely for informational purposes and does not constitute an offer to sell or a solicitation of an offer to buy securities. Information contained herein is based on sources which we believe to be reliable but is not guaranteed by us as being accurate and does not purport to be a complete statement or summary of available data. VoSI reports are intended to alert VoSI members to technical developments in certain securities that may or may not be actionable, only, and are not intended as recommendations. Past performance is not a guarantee, nor is it necessarily indicative, of future results. Opinions expressed herein are statements of our judgment as of the publication date and are subject to change without notice. Entities including but not limited to VoSI, its members, officers, directors, employees, customers, agents, and affiliates may have a position, long or short, in the securities referred to herein, and/or other related securities, and may increase or decrease such position or take a contra position. Additional information is available upon written request. This publication is for clients of Virtue of Selfish Investing. Reproduction without written permission is strictly prohibited and will be prosecuted to the full extent of the law. ©2022 MoKa Investors, LLC DBA Virtue of Selfish Investing. All rights reserved.
FOR OUR FREE MARKET LAB REPORT :