The VoSI Focus List is a compilation and reference list of stocks for which Pocket Pivot or Buyable Gap-Up Reports have been issued and which have been deemed suitable for inclusion on the Focus List. Not all stocks for which a Pocket Pivot or Buyable Gap-Up report has been issued will necessarily be added to the list. It is not intended as a "buy list" or a list of immediately actionable recommendations. Stocks on the list may or may not be in proper buy positions, and investors should exercise discretion and proper judgement in determining when and where stocks on the Focus List can be purchased. The following notes are intended to assist in this process. Please note that members can enlarge the Focus List image by clicking on the body of the email and then holding the Control Key while pressing the "+" key until it is large enough to read.
General Observations:
Major market indexes ran into some distribution around the highs this past week. Some rotation has also been evident as money moved out of techs and into airlines, transports, and other re-opening themed stocks like hotels and casinos. Interest rates continue to rise with the 10-Year Treasury Yield moving above 1.35%, its highest levels since the 0.398% low seen in March of last year. The NASDAQ Composite Index posted distribution days on Tuesday and again on Friday, but has been able to find support along its 20-day exponential moving average, which has been the case all the way up since the late November lows. Higher interest rates would represent a potential headwind for stocks, but it has still been a matter of being in the right stocks at the right time, which is where we have kept our focus. 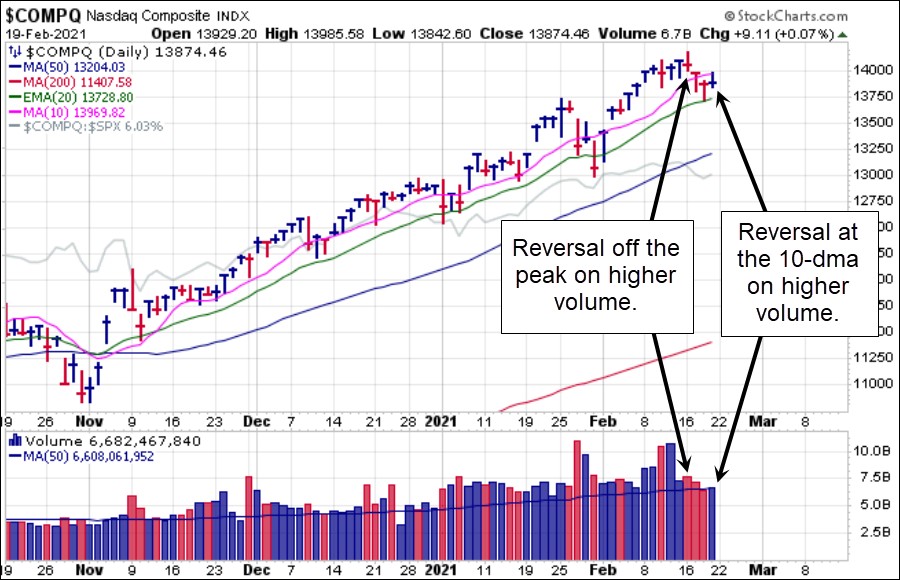 The Market Direction Model (MDM) remains on a BUY signal. While yields have shot straight up from lows on the longer end of the curve, this is likely temporary as the Fed will have to buy bonds which will reduce rates. The QE stimulus package is substantial. Thus any strength in the dollar is also likely to be temporary.

Notable Action:
Bitcoin and its related cousin-plays has been one such area of focus for us and certainly the hottest area of the market in 2021. The Grayscale Bitcoin Trust (GBTC) has had a move than five-fold move since we first reported on a U&R buy signal back in late September of 2020. The big-crypto ETN continues to maintain a climactic look on its chart, but the uptrend has persisted even after what appeared to be a potential climax top in early February merely corrected and continued higher. It remains quite extended at this stage. Bitcoin itself has a Grayscale-related headwind as the biggest unlocking events have already occurred this month. Unlocking occurs 6 months after a qualified investor buys bitcoin through the Grayscale fund, as opposed to retail investors who buy GBTC directly. Unlockings are bullish for bitcoin because bitcoin is then bought. We still have unlockings but on a smaller scale which should run through Mar 1. Then the first 3 weeks of March are relatively flat, similar to what we saw in January when bitcoin then had a -31% correction and based for most of January. That said, ethereum only corrected for a couple of days before heading higher along with the leading alt coins. Similar could happen again though new protocols such as Binance Smart Chain and its underlying cryptocurrencies are worthy competitors to ethereum. 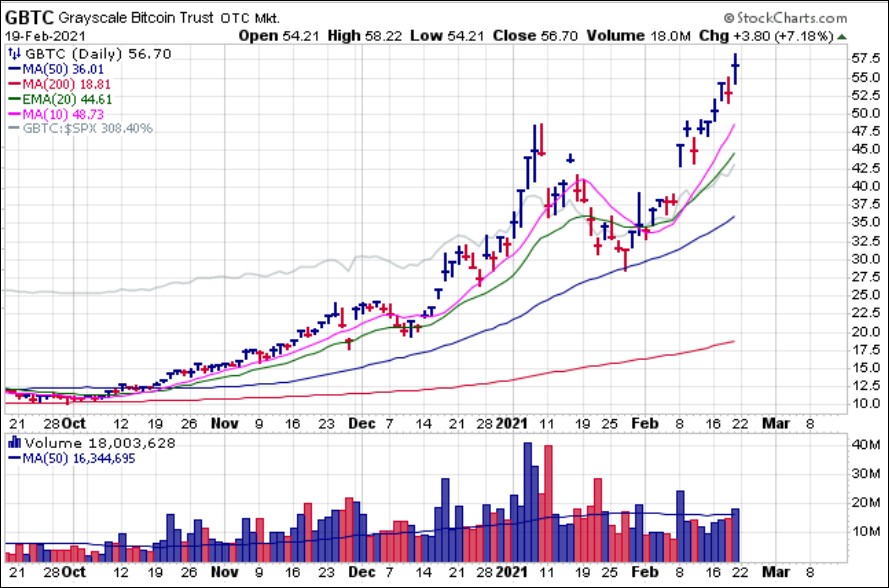 Two Mondays ago we reported on both Riot Blockchain (RIOT) and Marathon Patent Group (MARA) as buyable gap-ups as they came out of short flag formations. Both companies are Bitcoin miners and have benefitted greatly from the move in Bitcoin. Both stocks have more than doubled in less than two weeks. As we have said many times before, our preference is to focus on where we believe the best opportunities lie in this market rather than issuing a large quantity of reports on stocks that have lesser thematic quality. There has been no stronger theme than the Bitcoin theme as of late, but as these stocks become extremely extended and potentially near-term climactic, we would expect at least another correction and base-building process to ensue at some point, perhaps sooner than later. The bottom line for now is that these stocks are extremely extended at this point and nowhere near any actionable entry points. 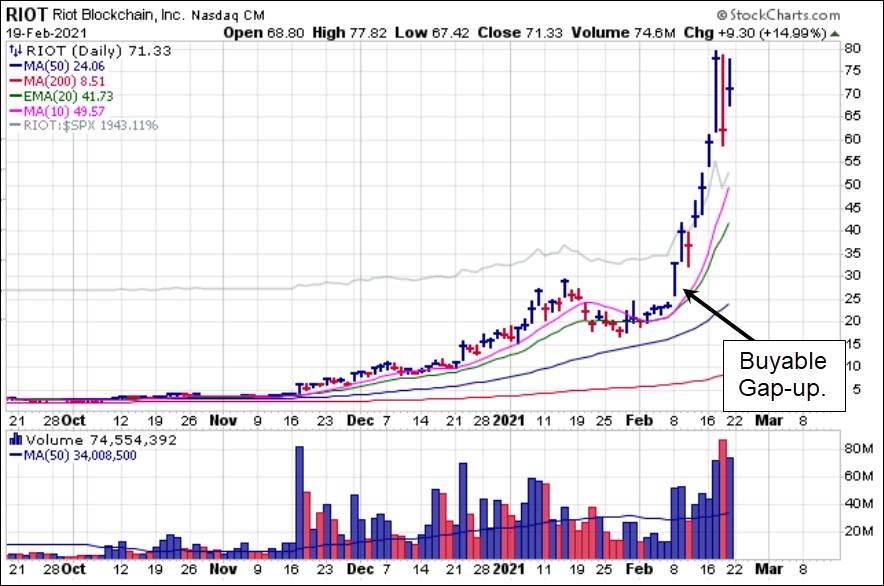 The movement out of tech is represented by the chart of Apple (AAPL) which is now living below its 50-day moving average. In fact, it flashed a short-sale entry signal at the 20-day exponential moving average on Tuesday before gapping below the 50-day line on Wednesday, where it ended the week. It will likely be removed from our Focus List now that the late January breakout after earnings has failed and the stock is showing concrete signs of a potential late-stage failed-base (LSFB) short-sale set-up. Refer to our latest book, Short-Selling with the O’Neil Disciples for more information on this type of set-up. AAPL has shown a tendency to come back from deleterious-looking sell-offs, however, so we would not draw any pat conclusions at this stage since we believe any further downside in the stock would likely coincide with a general market correction. 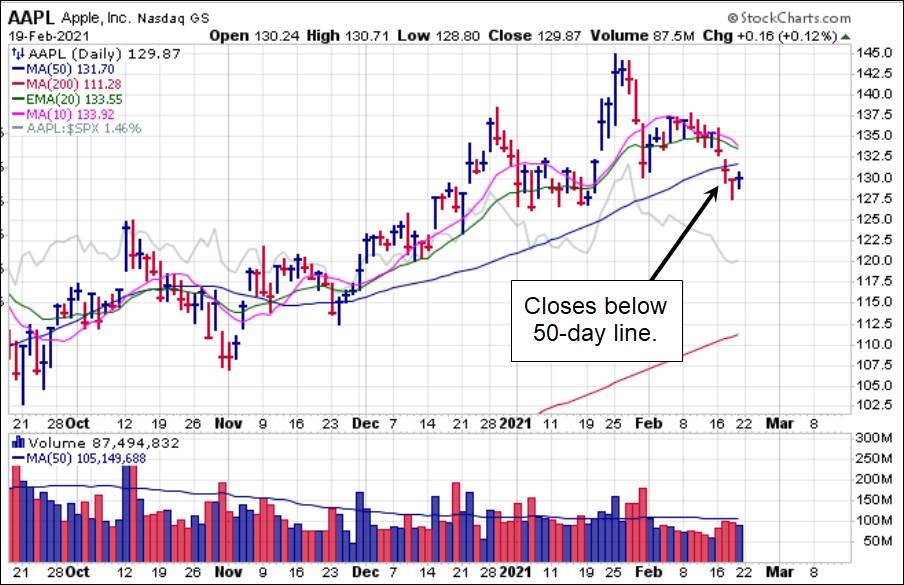 Tesla (TSLA) is also showing signs of weakening as it retests the prior 780.10 low where it posted a U&R on Wednesday. That move has lost any near-term momentum as the stock reversed and closed at 781.30 on Friday. Technically, that could be treated as a lower-risk entry based on the prior U&R while using the 780.10 low as a tight selling guide. 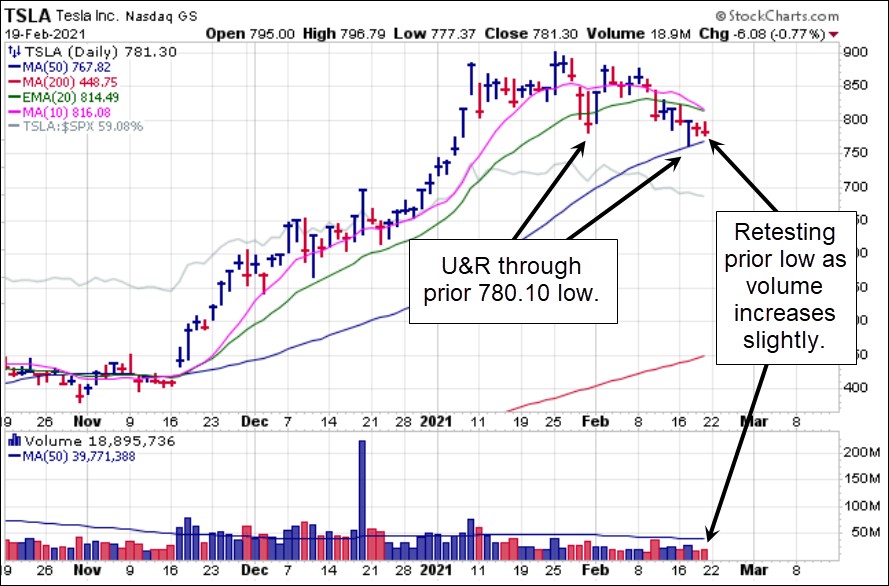 Fertilizer leader Nutrient (NTR) reported earnings on Wednesday after the close and gapped higher on Thursday but the move was short-lived as the stock reversed to close negative on the day. However, it continues to holds the 10-day moving average. We would view pullbacks to the 20-day exponential moving average as preferred pullbacks for lower-risk entries given the extended move off the lows of late January. 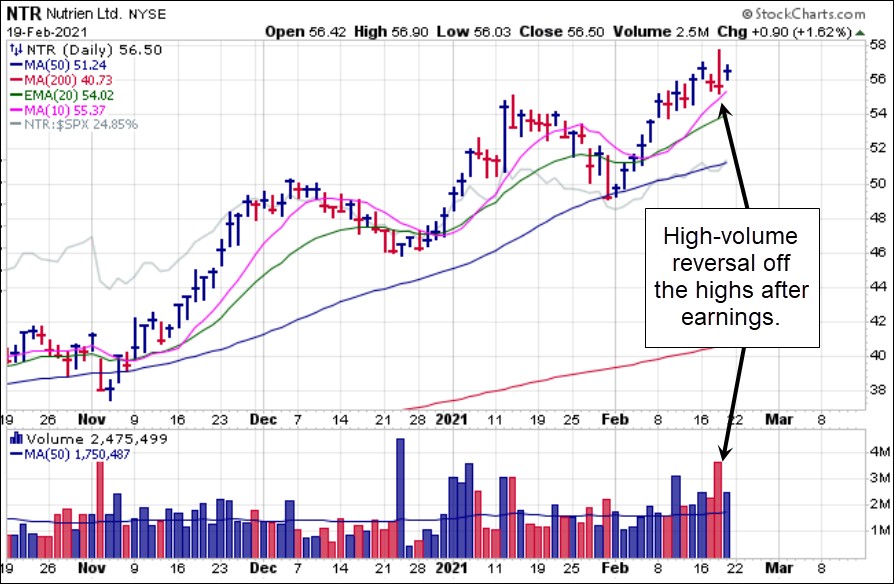