The VoSI Focus List is a compilation and reference list of stocks for which Pocket Pivot or Buyable Gap-Up Reports have been issued and which have been deemed suitable for inclusion on the Focus List. Not all stocks for which a Pocket Pivot or Buyable Gap-Up report has been issued will necessarily be added to the list. It is not intended as a "buy list" or a list of immediately actionable recommendations. Stocks on the list may or may not be in proper buy positions, and investors should exercise discretion and proper judgement in determining when and where stocks on the Focus List can be purchased. The following notes are intended to assist in this process. Please note that members can enlarge the Focus List image by clicking on the body of the email and then holding the Control Key while pressing the "+" key until it is large enough to read.
General Observations:
Major market averages finally saw a pullback in excess of 2% on Friday, as all sold off on higher volume. The chart of the Dow, below, is representative of the action seen in all of the major indexes on Friday. Note the severe change of character following the relatively smooth and consistent upside trend that developed since early September. Friday's action comes after some prior cautionary action as the indexes churned around their 10-dma following a gap-down from the peak on Tuesday of this past week. NYSE breadth on Friday was a scene of devastation, as decliners outnumbered advancers by a margin of 2747 to 304! 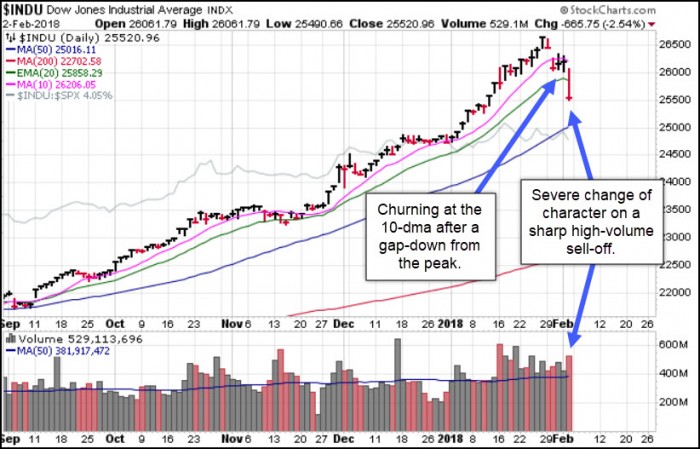 NASDAQ breadth has seen the bottom drop out as the chart of the the NASDAQ Advance-Decline line illustrates. On Friday, decliners outnumbered advancers 2581 to 591. The sharp breakdown in the NASDAQ Advance-Decline line over the past two days is nothing short of "breadth-taking," pun intended. Currently, the NASDAQ is -3.5% off of its recent highs, while the S&P 500 is down -3.8% from its recent peak, so far qualifying as nothing more than a short-term correction, but the severe breakdown in breadth could be pointing to further weakness ahead. Individual leading stocks are also showing signs of cracking.

Notable Action:
Alibaba (BABA) is failing on its recent base breakout as it breaches the 20-dema and breaks below the prior breakout point at the top of the base. This is the first indication of a potential late-stage failed-base (LSFB) short-sale formation. It has been removed from the Focus List, although we believe owners of the stock should have already sold on the base-failure and breach of the 20-dema on Friday. 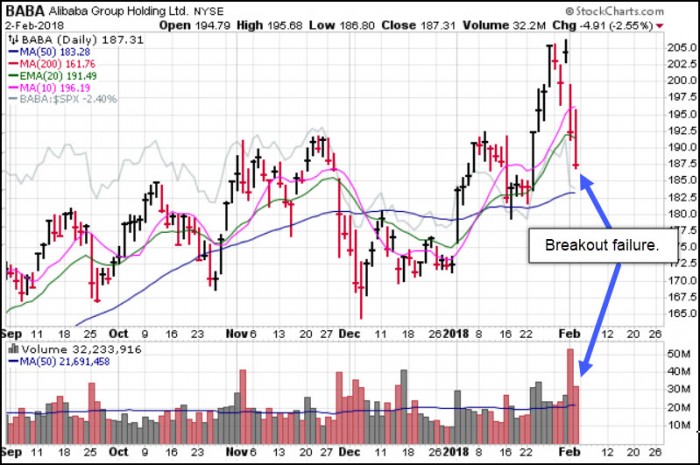 Caterpillar (CAT) has changed character from its prior steady uptrend as it breaks below its 20-dema. As discussed in our prior notes and reports on the stock, the 20-dema served as our selling guide for the stock. It has now moved further below the 20-dema as it appears set to test the 50-dma. For those who wish to give the stock more room, that would serve as the maximum selling guide, although we believe that reacting to the breach of the 20-dema was preferable based on the fact that the stock has had a long  price run over the past several months combined with the obvious change in its technical character. At best, it would need to hold the 50-dma and begin a long process of building an entirely new base. 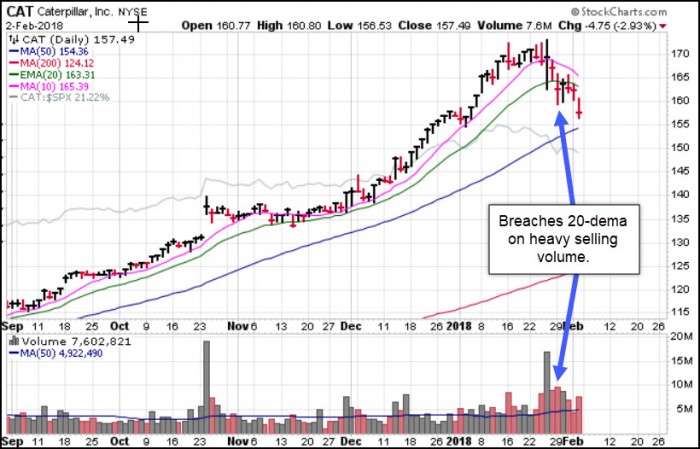 Electronic Arts (EA) has failed to hold its 126.47 intraday low of last Wednesday's buyable gap-up (BGU) move. Volume was heavy on Friday as the stock pushed to a lower low following the BGU. We believe the stock should be sold.

Facebook (FB) is sitting right on top of Thursday's breakout point, which came out of an erratic, short four-week base that formed after a previous failed breakout attempt. That may be too unstable of a base to set up further upside, and so may be vulnerable to failure if the general market continues to weaken. If the stock is unable to hold the 10-dma it should be sold. 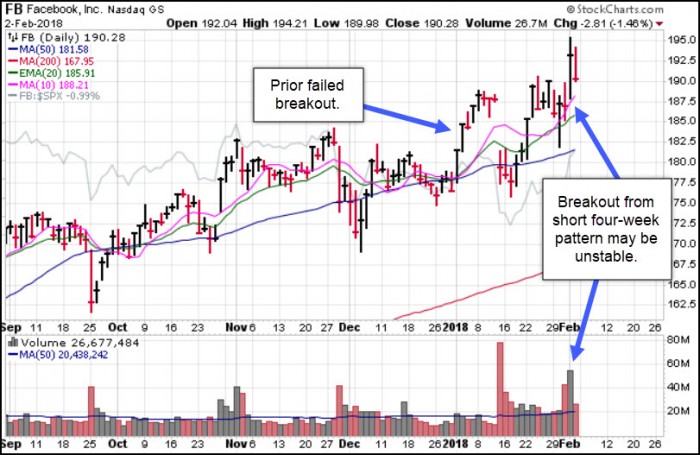 Square (SQ) has pulled down into its 20-dema, which is technically a lower-risk entry position. However, we would be alert to a breach of the 20-dema as a tight selling guide. If the general market continues to come under pressure, SQ could evolve into a double-top following a prior climax run in December 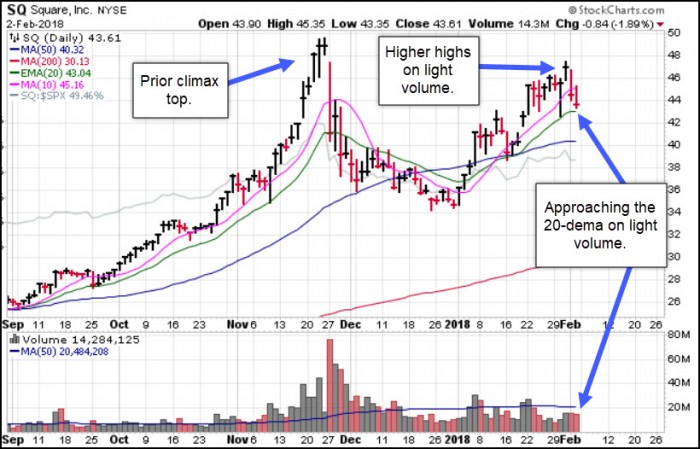 Weibo (WB) has breached its 20-dema and appears to be on the verge of a potential late-stage base-failure. The 20-dema was our selling guide for the stock, and we believe it should be sold. Keep in mind that the stock was originally buyable on the pocket pivot that occurred down at the 50-dma on January 2nd. It has been removed from the Focus List. 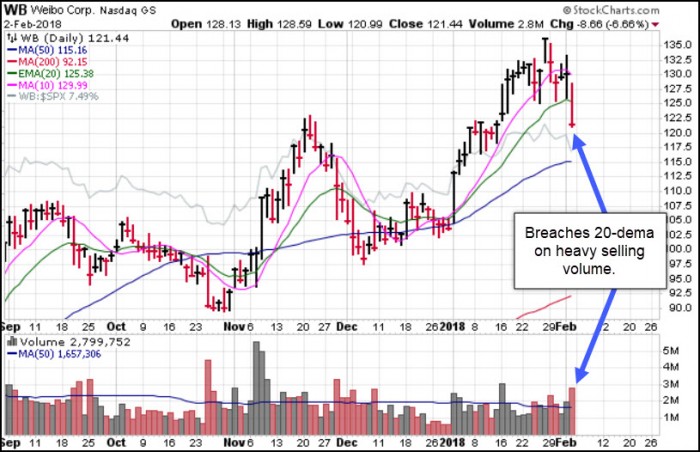