The VoSI Focus List is a compilation and reference list of stocks for which Pocket Pivot or Buyable Gap-Up Reports have been issued and which have been deemed suitable for inclusion on the Focus List. Not all stocks for which a Pocket Pivot or Buyable Gap-Up report has been issued will necessarily be added to the list. It is not intended as a "buy list" or a list of immediately actionable recommendations. Stocks on the list may or may not be in proper buy positions, and investors should exercise discretion and proper judgement in determining when and where stocks on the Focus List can be purchased. The following notes are intended to assist in this process. Please note that members can enlarge the Focus List image by clicking on the body of the email and then holding the Control Key while pressing the "+" key until it is large enough to read.
General Observations:
Major market indexes powered through the prior week's sharp sell-off that saw the NASDAQ Composite Index correct 5.41% while the Dow and S&P 500 Indexes each corrected just over 4.5%. This is sufficient to call the pullback a short-term correction, which is typically 3-5%. After this brief textbook pullback the indexes moved to fresh all-time highs by week's end as the uptrend continues 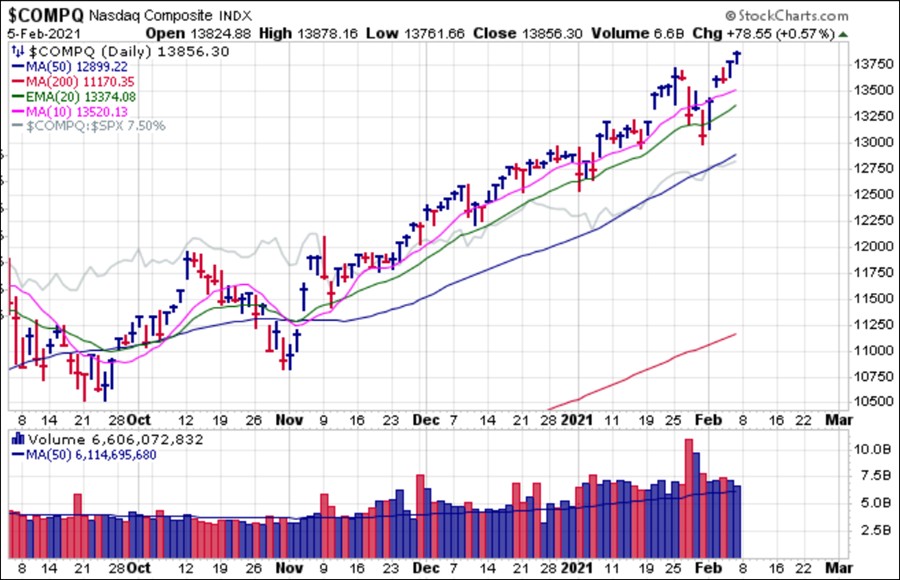 The Market Direction Model (MDM) remains on a BUY signal. The impending stimulus package is a strong tailwind for higher stocks prices.

Notable Action:
We reported on two buyable gap-ups Thursday. The first, Canoo (GOEV), gapped up in response to more definitive report that Apple (AAPL) was going to partner with Kia Motors, owned by Hyundai Motors, to produce its own electric vehicle. AAPL previously held talks with GOEV in 2020, and it is believed that a deal with Kia would utilize GOEV's technology. One would seek to buy the stock as close to Thursday's intraday low at 17.17 as possible. The same low would then serve as your selling guide per the rules for playing Buyable Gap-ups. Note that on Friday evening Bloomberg reported that talks between Apple and Kia had “paused.” Depending on how this story develops by Monday morning it may have an effect on both AAPL and GOEV stock prices. 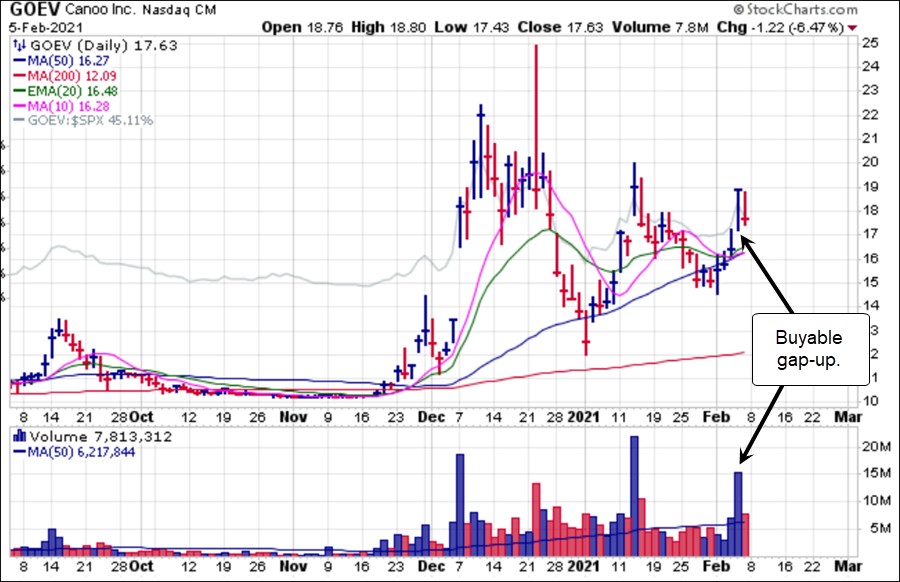 PayPal (PYPL) gapped up on Thursday after reporting strong earnings Wednesday after the close. We have liked PYPL for some  time as an additional Bitcoin "cousin" stock as the service now allows individual to buy and sell Bitcoin. We have preferred, however, the true leader in this area, Microstrategy (MSTR) has been a staple of our Focus List since the latter part of 2020 and which has continued to streak to new highs, closing the week at 806, clearing another Century Mark on light volume. With respect to PYPL's BGU, the stock is buyable as close to the 260.85 BGU intraday low of Thursday which would then serve as a selling guide. 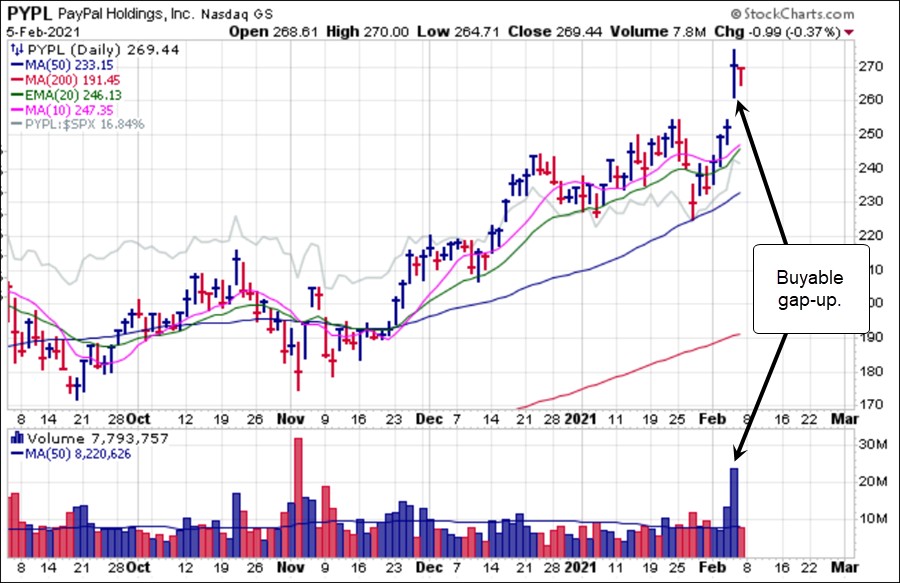 Apple (AAPL) was showing the initial signs of a possible late-stage base-failure last week, but has been able to regain its 20-dema, helped along by the EV news on Thursday. However, the net result of this past week's rally following a big-volume breakout failure two Fridays ago is a wedging rally into the 10-dma, despite the EV news, and the stock is more in a shortable position than a long entry position, although could resolve in either direction depending on general market context. 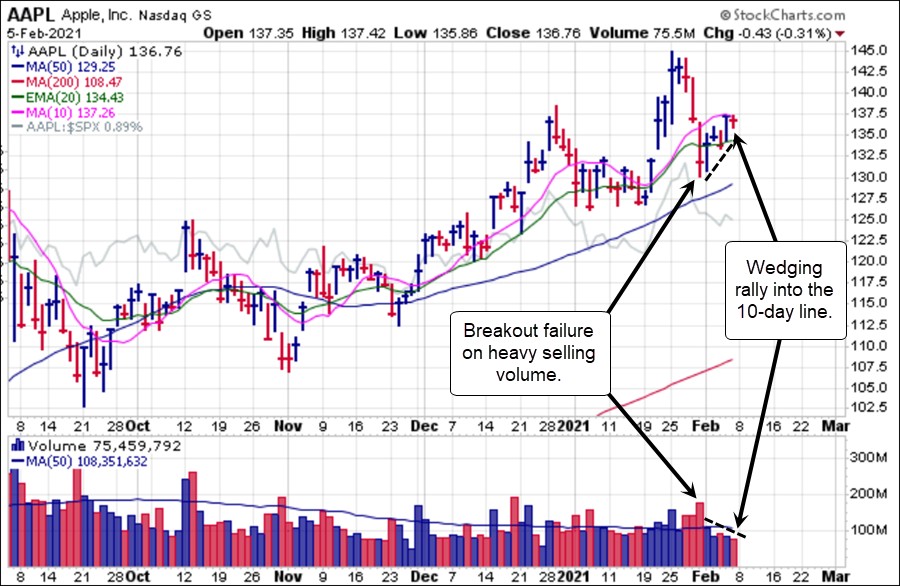 Bitcoin has continued to base, keeping the Grayscale Bitcoin Trust (GBTC) in what is now a four-week flag formation. For now, the 10-week moving average on the weekly chart below, corresponding to the 50-day moving average on the daily chart, serves as a reference for potentially buyable support on pullbacks. The lock up period ended Feb 3 so is a strong tailwind for higher prices in addition to the near daily bullish announcements of major companies pivoting to either buying or facilitating bitcoin transactions. 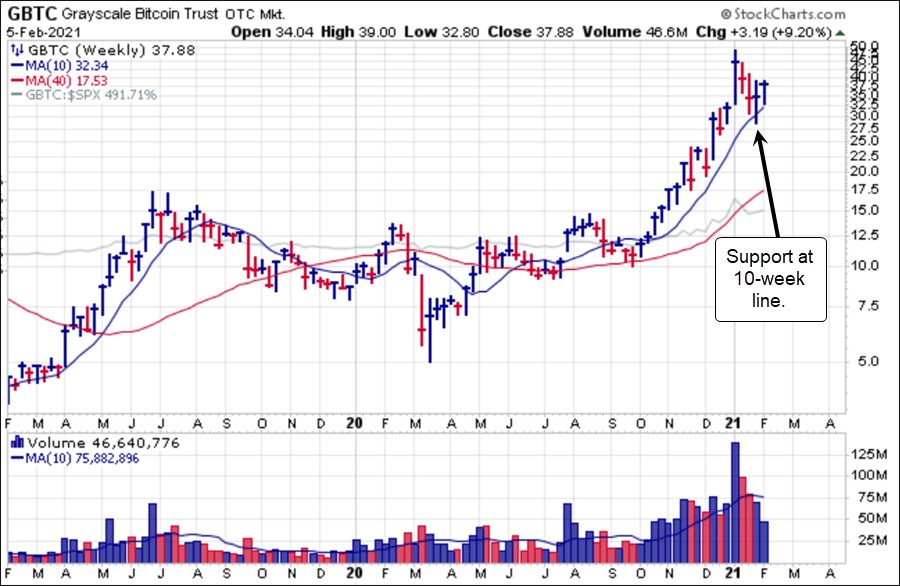 The great silver squeeze that wasn't sent silver and silver miners gapping higher on Monday morning. That turned out to be a selling opportunity as the entire affair reversed badly. As always, we do not advocate chasing strength in the metals, and this was certainly another case. While we considered whether the move in the Sprott Physical Silver Trust (PSLV) could be treated as a BGU, our final assessment was that it was news-driven and not based on any real strategy other than the idea that would buy the iShares Silver Trust (SLV) and "force delivery of physical" in order to create a silver short squeeze. The SLV is not required to deliver physical to buyers, and has only 5% short interest, so the entire idea was flawed on its face.

The PSLV meanwhile is finding support at its 10-dma, although may need some time to settle down along that and the 20-dema, although we would view it as buyable along the 10-day line while using the 20-dema as a maximum selling guide. While the attempted squeeze on paper silver was unsuccessful, we note that physical prices still remain at highs seen back in late July and early August of last year. Based on our surveys, one-ounce Silver Eagle coins are generally going for $38 a coin and up, reflecting where the deficiency lies - not in short interest but a shortage of physical silver. It may only be a matter of time before paper silver begins to move again if physical prices show no sign of receding. 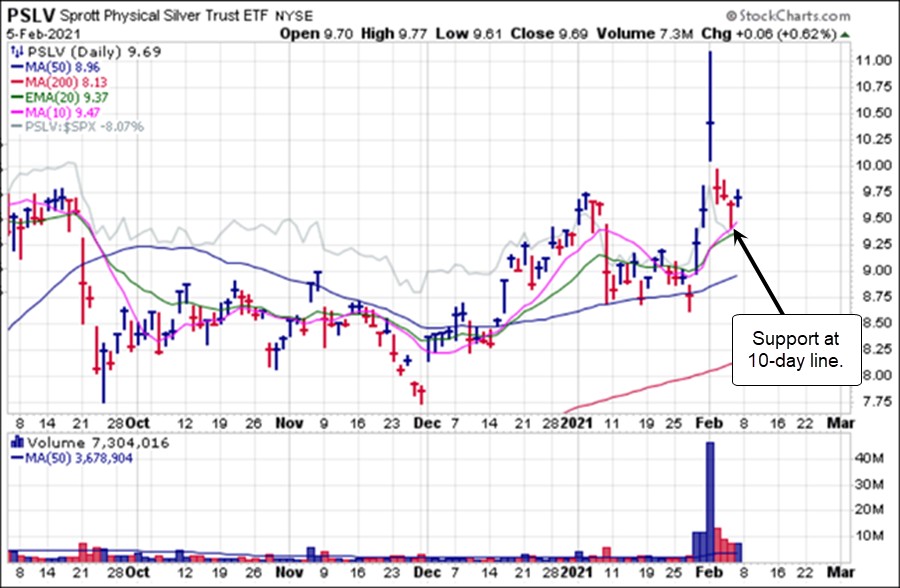 Gold has diverged markedly from silver, and the Sprott Physical Gold Trust (PHYS) is currently testing its prior January lows and on Friday posted a U&R through two prior lows in the pattern, as we reported that day. The PHYS posted an intraday low of 14.19 on Friday, undercutting its December 14th low at 14.26 and its January 15th low at 14.33 before ending the day at 14.37. That creates a U&R long entry at both lows using either low as a selling guide, depending on how tight one  wishes to keep their risk. 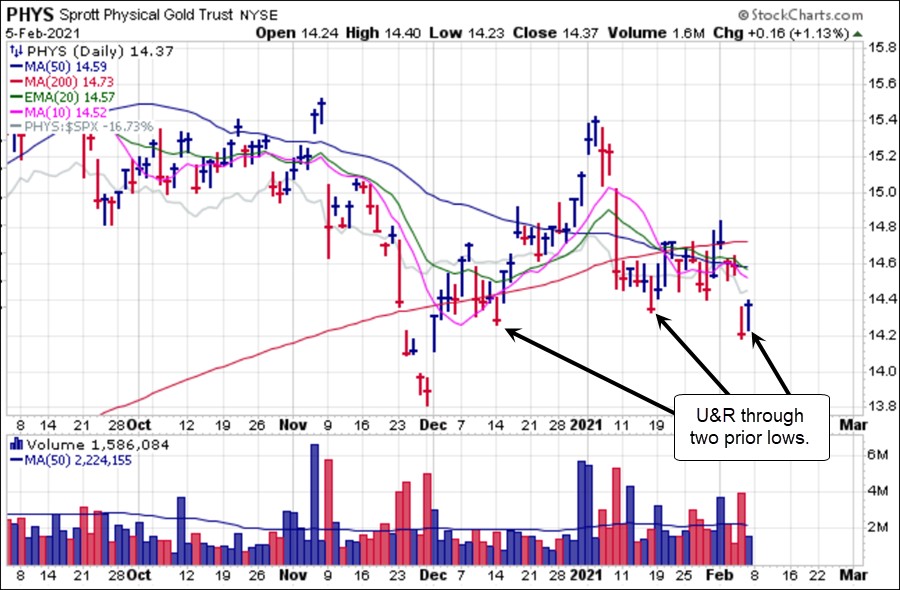 While the major market indexes continue to trend higher, the situation with respect to individual stocks is mixed. There are weak patterns to be found, and constructive patterns, and in between that a lot of choppy basing and generally unresolved price action. Investors should continue to monitor their selling guides as the market situation remains fluid on a stock-by-stock basis.