The VoSI Focus List is a compilation and reference list of stocks for which Pocket Pivot or Buyable Gap-Up Reports have been issued and which have been deemed suitable for inclusion on the Focus List. Not all stocks for which a Pocket Pivot or Buyable Gap-Up report has been issued will necessarily be added to the list. It is not intended as a "buy list" or a list of immediately actionable recommendations. Stocks on the list may or may not be in proper buy positions, and investors should exercise discretion and proper judgement in determining when and where stocks on the Focus List can be purchased. The following notes are intended to assist in this process. Please note that members can enlarge the Focus List image by clicking on the body of the email and then holding the Control Key while pressing the "+" key until it is large enough to read.
General Observations:
Major market indexes pulled off of their recent highs on Friday, but remain within short five-day consolidations. The NASDAQ Composite Index found support at its 10-day moving average on Friday after a minor gap-down at the open and closed down on the day as volume declined. Meanwhile, the S&P 500 and Dow Indexes suffered distribution days off the peak on Friday as they sold off on higher volume. For now, the indexes remain in uptrends. 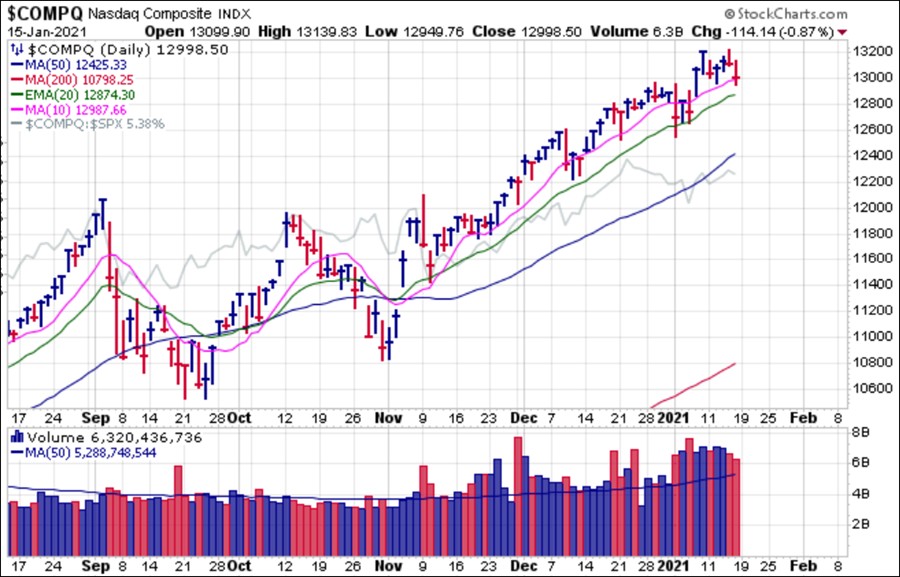 Notable Action:
Bitcoin has remained a story in this market as it begins to experience some volatility after approaching the $43,000 level last week. The Grayscale Bitcoin Trust (GBTC) has pulled back and has found support around its 10-day moving average. Given the extension here we would look for near-term support closer to the 20-dema. 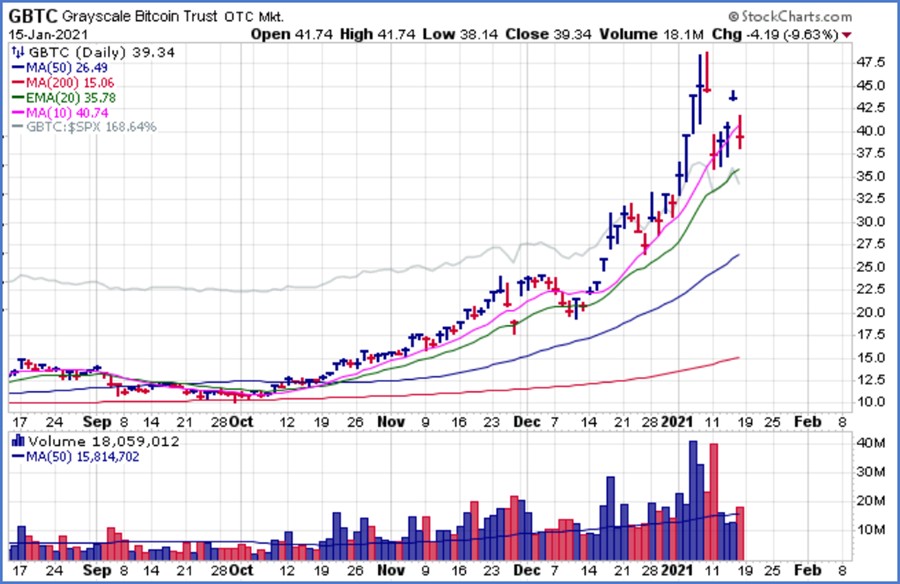 Bitcoin's ship remains at full mast given the tailwinds discussed in prior reports. Unprecendented numbers of high net worth investors have entered, with whale numbers at an all time high, a very strong indicator that we are still early in this bitcoin bull market.

The chart shown below from bitcoin research site Glassnode shows the movement of coins between HODLers that tend to take their coins off the market vs participants that tend to trade their coins. Whenever coins move to strong HODLers, it’s a leading sign of bullish activity. We are in a time of coins moving to very strong HODLing. Even during this brief bitcoin price consolidation period, coins continue to be taken off the market as shown by the red spike which is a signal that we will see a continuation of bullish activity.

Meanwhile, gold and silver are breaking support and should be avoided for now pending any new information. We expect that lows will eventually be found, but at this time there is no concrete evidence to indicate a bottom just yet.

While we are able to find some long traders here and there, many leading stocks have lost some momentum as of late. On Monday we sent out a Voodoo Report on Funko (FNKO) as it posted a voodoo pullback to the 10-day and 20-dema lines, leading to a big-volume breakout on Thursday. Rare earth metals miner MP Materials (MP) was reported on as a U&R long entry on Monday, leading to a strong move higher from there, but it has since pulled back into the 10-day and 20-day lines where it found support on Friday. This may create another lower-risk entry using the two moving averages as selling guides.

Among other names we reported on during the week, the action turned out to be a big dud. Silver miner Coeur Mining (CDE) failed to hold a U&R set-up and is now busting its 50-day moving average. Cloud leader Fastly (FSLY) posted a voodoo pullback to the 50-day line on Monday, rallied a bit, and then pulled a big, ugly outside reversal on Friday as volume picked up sharply. EV maker Fisker (FSR) posted a stalling pocket pivot on Wednesday, which promptly failed. Finally Middle-East social-networking platform Yalla Group (YALA) posted a strong pocket pivot on Monday but has since slumped back to its 10-day and 20-day moving averages. If set-ups work at all, they tend to be short-lived, of these six names discussed here and above, only FNKO has followed-through with strong action. 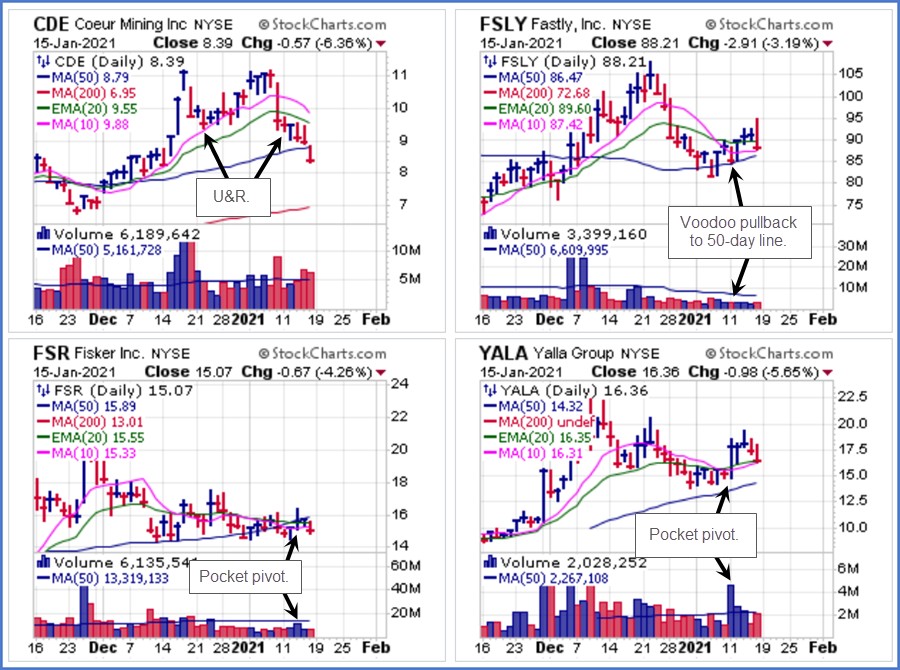 Big-stock NASDAQ leaders are also continuing to slump. While they led the market with sharp rallies into year-end 2020, they have simply trended lower during the first two weeks of 2021. In the group chart below note that Amazon.com (AMZN), Facebook (FB), Microsoft (MSFT), and Netflix (NFLX) are now all below their 50-day moving averages, while Apple (AAPL) triggered as a short-sale on Friday as it broke the 20-dema on above-average selling volume. Can the market continue higher without its big-tech leaders as we look for earnings reports from each over the next two weeks?

Gil Morales posted several VoSI VooDoo Reports during the week covering the action in uranium producer Cameco (CCJ) that illustrated the two-sided, or "360-degree" nature of this market when it comes to the action of individual stocks. In this environment, we find that often leading stocks can suddenly go schizoid where constructive action suddenly turns bearish. That was the case with CCJ on Tuesday when a Voodoo Report was sent out noting the low-volume pullback to the 10-day line that morning. Later in the day, an update report was sent out discussing how CCJ was suddenly morphing into a short-sale candidate as it broke the 10-day line with volume increasing. After a short rally back up into the 10-day line, CCJ then came completely apart on Friday as it triggered another short entry at the 20-dema and plummeted lower from there. A great example of the often sudden shifts in technical action where "good stocks go bad." 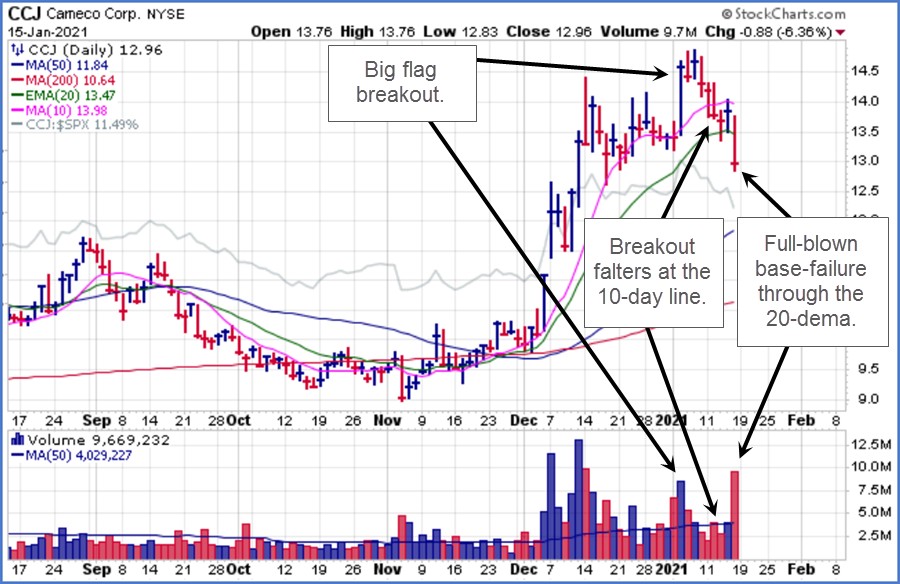 With big social-networking names now imposing censorship policies, we've seen Facebook (FB) and Twitter (TWTR) stock prices suffer after each of those companies announced such new restrictions. On Thursday morning, Snap (SNAP) announced it own new censorship moves and we issued a Short-Sale Set-Up report as it broke below the 10-day moving average on heavy selling. Friday saw the stock rally weakly back up into the 20-dema, which can serve as a secondary short-sale entry point using the 20-dema as a covering guide. 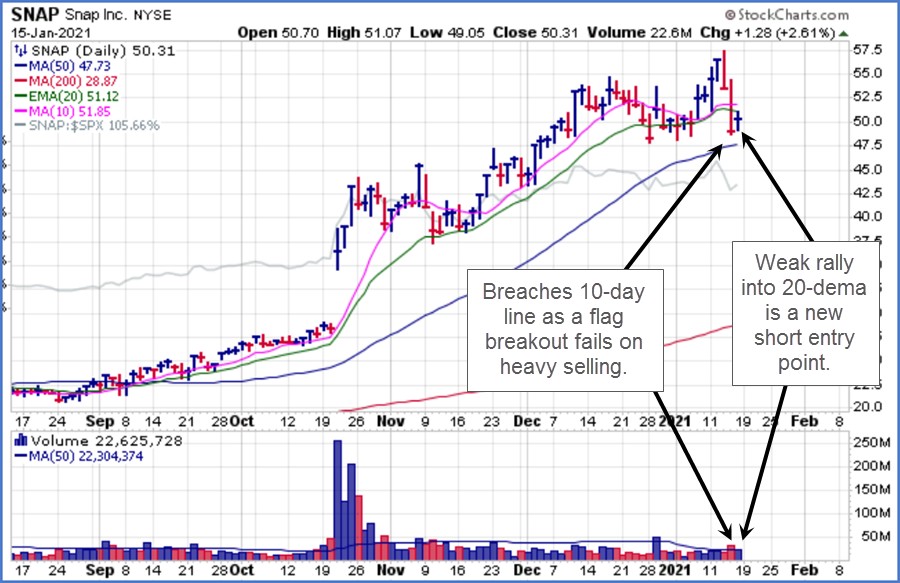 The action in individual stock charts certainly lends credence to a cautionary stance at this stage of the market rally. We have seen a shift in the types of set-ups appearing in real-time while bullish set-ups mostly fail to pan out. This may be telling us something, so members should remain alert and have their selling plans firmly in hand in the event further deterioration among individual stocks takes hold.