The VoSI Focus List is a compilation and reference list of stocks for which Pocket Pivot or Buyable Gap-Up Reports have been issued and which have been deemed suitable for inclusion on the Focus List. Not all stocks for which a Pocket Pivot or Buyable Gap-Up report has been issued will necessarily be added to the list. It is not intended as a "buy list" or a list of immediately actionable recommendations. Stocks on the list may or may not be in proper buy positions, and investors should exercise discretion and proper judgement in determining when and where stocks on the Focus List can be purchased. The following notes are intended to assist in this process. Please note that members can enlarge the Focus List image by clicking on the body of the email and then holding the Control Key while pressing the "+" key until it is large enough to read.
General Observations:
The major market indexes continued their winning ways as the New Year's Party of new highs continued. All four of the major market indexes, the Dow, the S&P 500, the NASDAQ Composite, and the small-cap Russell 2000 Indexes all ended the week at all-time weekly highs with the NASDAQ and the S&P 500 posting all-time highs on Friday. The NASDAQ Composite cleared the 13,200 level for the first time on Friday as volume picked up vs. the prior day, which is constructive. 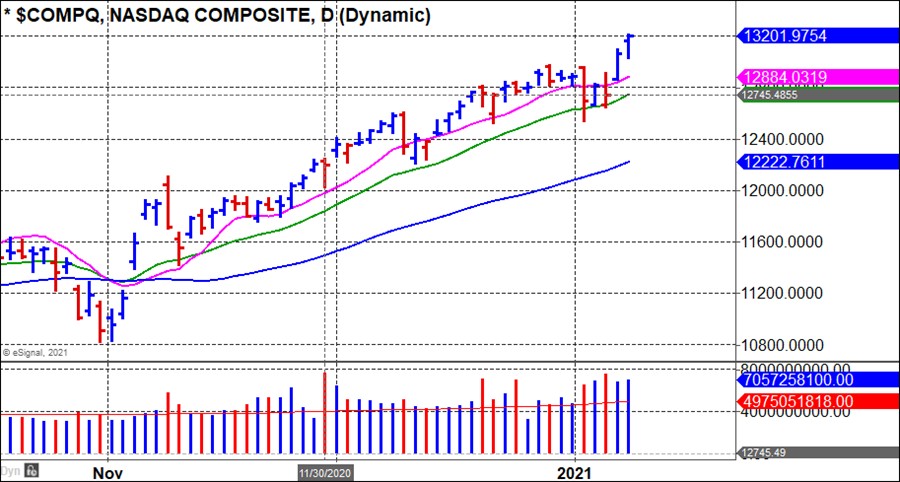 After briefly switching to a CASH signal on Wednesday, January 6th, the Market Direction Model (MDM) switched back to a BUY signal on Thursday morning, January 7th. Staying fluid in real-time is key. The model using the TECL benchmark is up just over +150% year-over-year.

Notable Action:
Commodity-related names have taken the lead in 2021. We added Nutrien (NTR) to our Focus List after reporting on the stock as a pocket pivot the prior week as it was coming up off the lows of its prior base. It has since broken out and is extended. Pullbacks to the 10-dma would offer lower-risk entries from current levels. 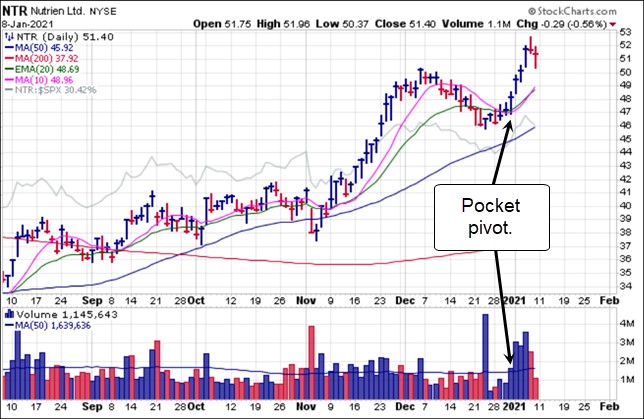 Piedmont Lithium (PLL) posted a pocket pivot on Tuesday and has behaved in volatile fashion since even as it continues to trend higher. Pullbacks to the 10-dma, such as we saw on Wednesday, the day after the pocket pivot, would offer lower-risk entries from current levels. 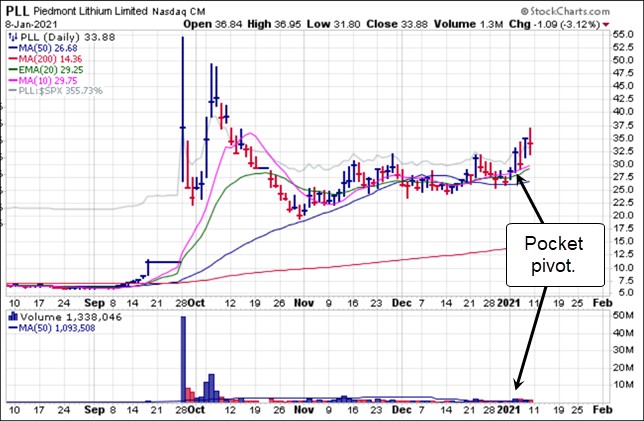 Oil leader Parsley Energy (PE) posted a pocket pivot on Tuesday and is now extended. As with NTR and PLL, pullbacks to the 10-day moving average would offer lower-risk entries from current levels. 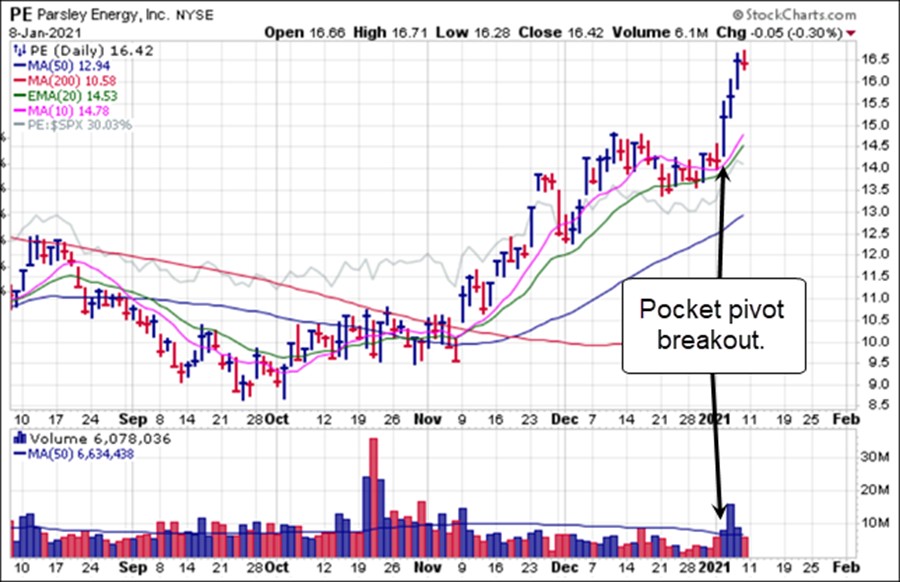 Bitcoin cleared the $40,000 level on Thursday, driving the Grayscale Bitcoin Trust (GBTC) to all time highs, hitting an intraday peak of 48.65 on Friday. Certainly, the move looks parabolic, but it has tended to look that way when it crossed $20,000, then again at $30,000 as it becomes ever more parabolic. The buying pressure is at record levels as major companies including PayPal and Square, and institutions such as Grayscale buy up all the bitcoin being minted. That said, expect sharp corrections on the way up from profit taking or negative news items, though corrections may be contained to under -25%, rather than 30-40% during its prior bull, due to the buying pressure being exerted.

As the owner of well more than $1 billion worth of Bitcoin, Microstrategy (MSTR) cleared the $500 Century Mark on Thursday as Bitcoin cleared the $40,000 level. That triggered a long entry add point at the $500 level based on Jesse Livermore's Century Mark  Rule, while using the $500 level as a selling guide for the portion of one's position added to above $500. One should be alert to potential reversals in Bitcoin on natural but likely sharp pullbacks as they will most certainly influence where MSTR goes from here. Thus the $500 level could also be implemented as a trailing stop for one's entire position if so desired. 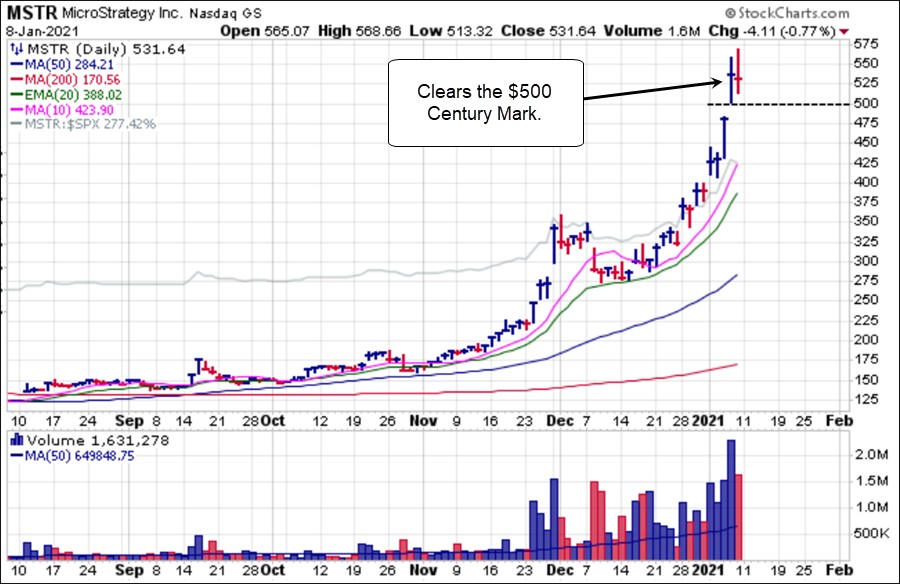 Tesla (TSLA) cleared the $800 Century Mark on Thursday to trigger a long entry add point at the $800 level based on Jesse Livermore's Century Mark Rule. As per Livermore's rule, one then uses the $800 level as a selling guide for the portion of the position purchased at that level. In addition to his many other distinctions, including being the first CEO ever to smoke cannabis live and on camera during an interview, Tesla CEO Elon Musk is also now the world's richest person thanks to his holdings in TSLA stock. And to think it was only back in 2013 when Dr. K was partying with him in St. Barths. 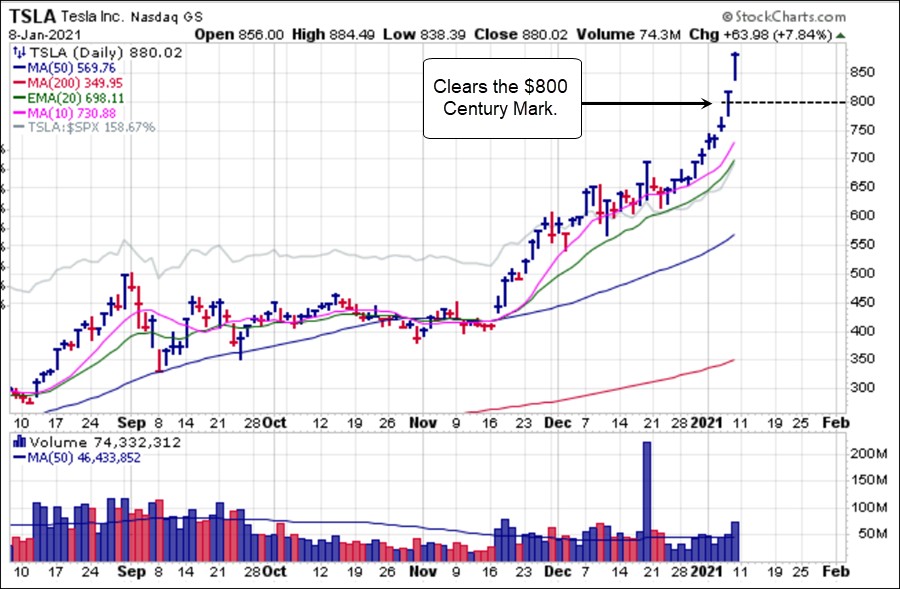 Apple (AAPL) remains well above its prior pocket pivot along the 10-day line as we reported at that time. More news surrounding a possible EV "iCar" came out on Friday with reports that AAPL held discussions on partnering with Hyundai to produce an Apple EV. It remains buyable on pullbacks to the 20-dema. 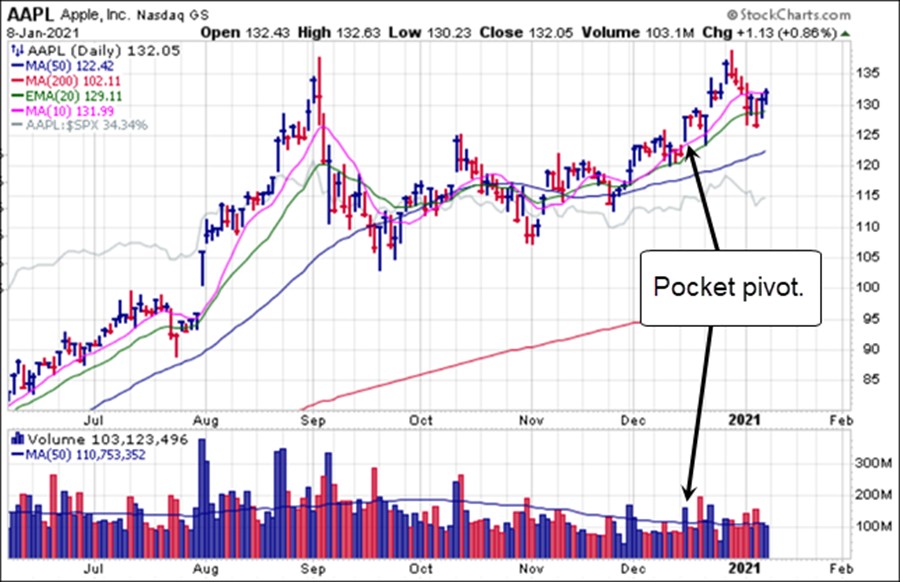 Gold and silver were hit hard on Friday on the prospect of higher interest rates as the Ten-Year Treasury Yield clears 1%, more than doubling off the .398% low seen in March.  Accordingly, the Sprott Physical Gold Trust (PHYS) and the Sprott Physical Silver Trust (PSLV) came down sharply on Friday. Silver, which has outperformed gold significantly since the late November lows, held at and bounced sharply off its 50-day moving average. Thus the PSLV was buyable there using the line as a tight selling guide. After closing Friday at 9.01, the PSLV also remains well above the 7.75 U&R long entry low it posted in late November and which we reported on at that time.

The PHYS, on the other hand, has undercut its 200-day moving average and can be watched for a possible shakeout at the 200-day line as a re-entry trigger based on a simple moving average undercut & rally long set-up. While higher interest rates initially trigger a higher dollar, which is negative for metals, it also signals reflation ahead, which in turn devalues the dollar over the longer-term and will likely be bullish for precious metals. Using opportunistic pullbacks is our preferred way to buy the metals as we shun chasing strength. Expect a $3 trillion stimulus package under Biden.