The VoSI Report Watch List is a compilation and reference list of stocks for which Pocket Pivot or Buyable Gap-Up Reports have been issued. It is not intended as a "buy list" or a list of immediately actionable recommendations. Stocks on the List may or may not be in proper buy positions, and investors should exercise discretion and proper judgement in determining when and where stocks on the List can be purchased. The following notes are intended to assist in this process. Please note that members can enlarge the List image by clicking on the body of the email and then holding the Control Key while pressing the "+" key until it is large enough to read.
General Observations:
Major indexes came under selling pressure off their recent highs, posting their worst week since May. The S&P 500 Index reversed off its opening highs on Friday and closed negative on higher volume. The NASDAQ Composite Index also reversed, but volume was lighter. All of the major market indexes were previously rallying on light volume as they posted all-time highs earlier in the week. For the most part, the market seems to be grappling with just how much, if at all, the Fed will lower rates when it meets next week, and whether this is a positive or negative for paper assets like stocks over the long run as a major devaluation of fiat could come in the next few years should QE continue at its present pace. Hard assets are the beneficiaries including gold, bitcoin, and real estate.

In our 28 years of experience as investors and traders, neither of us has ever seen an environment where the Fed is looking to lower interest rates and reverse a raising cycle when the stock market is simultaneously posting all-time highs. The opposite has always been the case, but in the Age of QE the world has been turned upside-down in many ways. This is just one of them. Since QE began in late 2008, the U.S. stock market sharply corrects by typically around -20% when QE ended or QT (quantitative tightening) became an issue. This prompted QE2, QE3, Operation Twist, and most recently, Fed Chair Powell's soothing words just after the first Christmas crash on record that occurred in December 2018. Powell said he would do what it takes to keep the bull market alive. This resulted in a sharp uptrend which has persisted since then. Meanwhile, other central banks around the planet have also reversed course from one of projected tightening to one of even easier money. Rates which are already at historical lows in most cases will now go even lower, and in some cases more negative such as in Germany, Switzerland, and Japan. 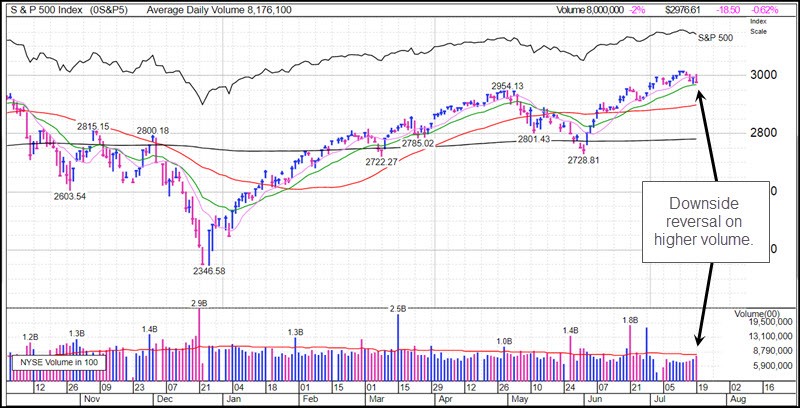 Notable Action:
With earnings reports coming up within the next two weeks for more than half the names on the Report Watch List, we do not advise taking fresh positions ahead of earnings. Unless a particular stock posts some significant upside prior to releasing earnings that can provide a reasonable profit cushion beforehand, then playing "earnings roulette" is not advisable, as owners of Netflix (NFLX) and railroader CSX Corp. (CSX) this past week can attest. Most stocks on the list, whether reporting earnings soon or not, have come under some selling pressure in various forms.

In cases where a fresh base breakout has occurred, such as with CyberArk Software (CYBR), buying the stock here would require a sharp move higher ahead of the company's expected August 7th earnings report. Otherwise, buying the breakout without any further upside price thrust puts one in the unenviable position of playing earnings roulette. In this market, however, strong upside continuations following breakouts have generally not been the norm. 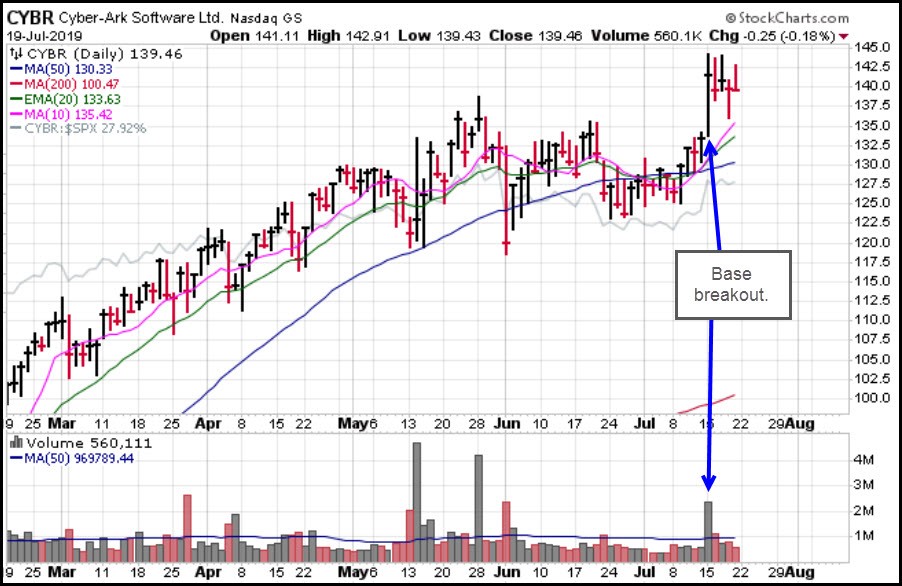 We are also action in certain names on the list that looks more shortable than buyable. For example, ShockWave Medical (SWAV) attempted a U&R move back up through the prior lows in its pattern but failed badly on Friday as it reversed and closed down as volume increased vs. the prior day. Thus, once this failed at the prior low, it was a short-sale, and may continue to be so on any rallies up into the 20-dema. 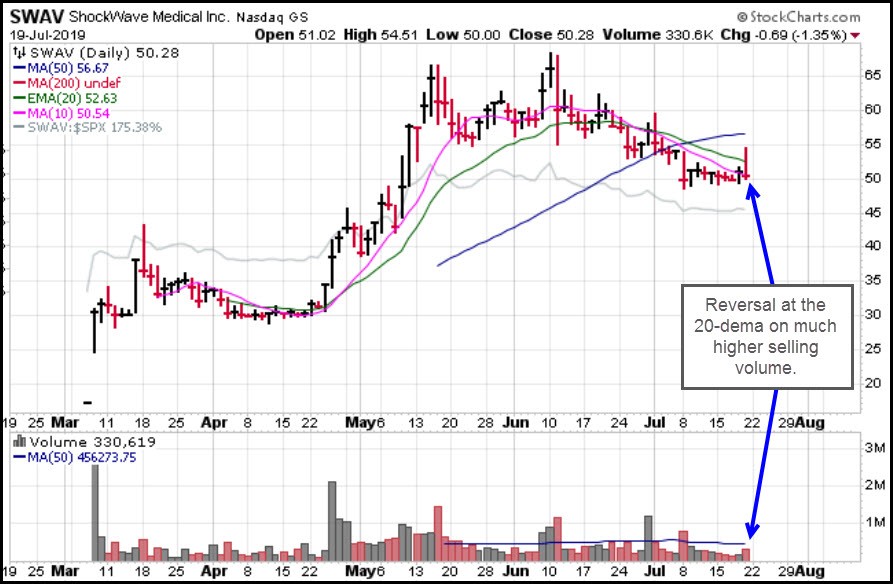 Tandem Diabetes Care (TNDM) has been in a sloppy base for several months now, and on Friday ran into resistance at its 50-dma. Gil discussed this as a short right at the line in Friday's real-time webinar. TNDM is expected to report earnings on July 29th, next Monday. 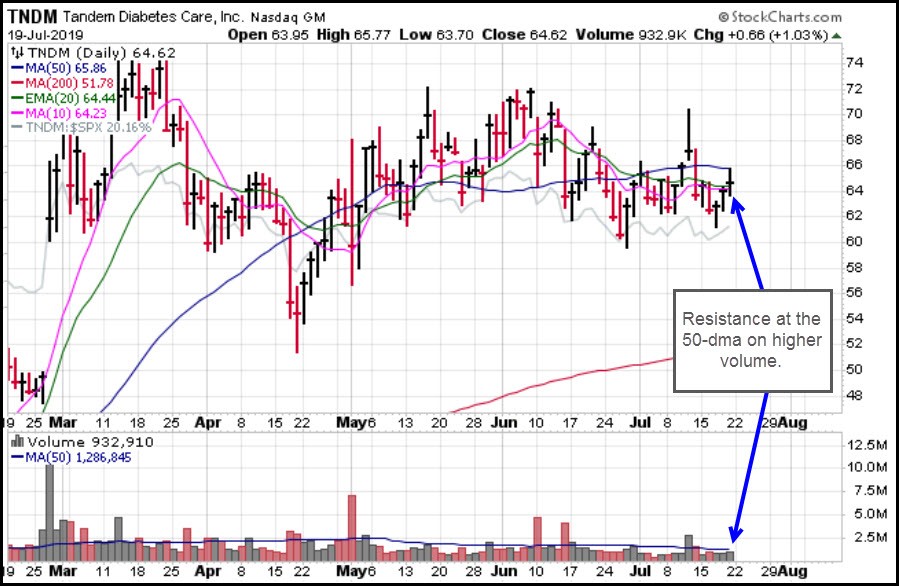 Central banks around the globe are trapped in a position where they cannot raise interest rates and are now faced with the need to unleash a new wave of QE. Any idea that central banks, including the Fed, would be able to slowly ratchet rates up to historical norms has been tossed out the window. That is why we've seen a big rally in Bitcoin (we recommended purchase of the Grayscale Bitcoin Trust (GBTC) back in March as a way to play Bitcoin) over the past couple of months as precious metals have also gained upside momentum.

Recently, we have reported on pocket pivot moves in both the SPDR Gold Shares (GLD) and the iShares Silver Trust (SLV). Gold recently broke out to a three-year high, with the GLD finally piercing the 130-131 price level. Last week it posted a pocket pivot at the 10-dma and broke out of a short flag formation on Thursday. Given the extended position of the GLD, that move ran into some profit-taking after comments on Thursday that the Fed should be ready to "vaccinate" the economy with interest rate cuts were walked back slightly on Friday. Currently, our expectation is for a 25 basis point cut when they conclude on July 31, but we believe the Fed will be forced to continue lowering rates again before the year is out. This will likely continue to provide upside impetus for precious metals and also Bitcoin, which came under attack this past week from Trump Administration officials. 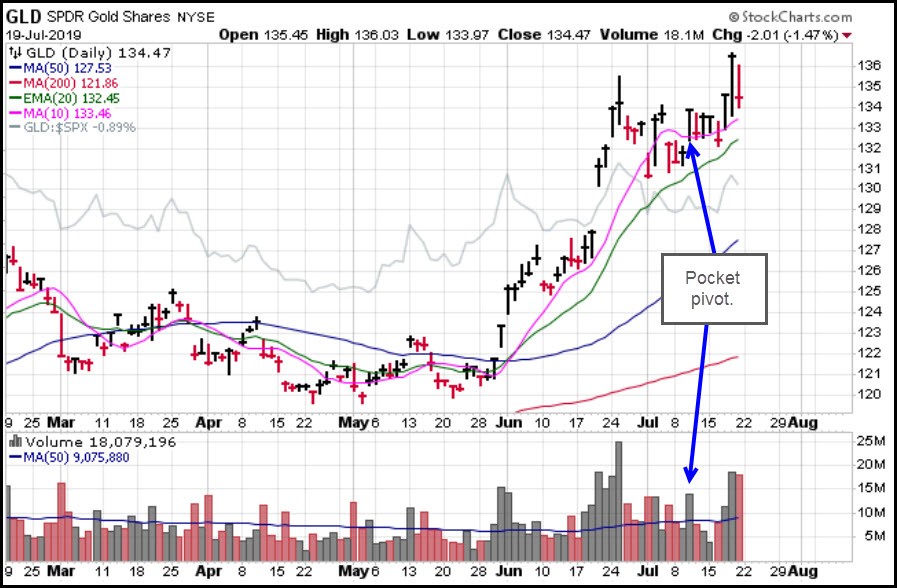 We reported on the SLV on Tuesday when it posted a pocket pivot breakout on what could also be viewed as a buyable gap-up. It quickly ran up to its highest level since June of last year in a sharp four-day run that finally ran into some profit-taking on Friday. Gil had previously discussed the potential for a turn in SLV in his VooDoo Report of July 4th just before the SLV gapped down to its 200-dma, providing a highly opportunistic entry at the line, and then rebounded  on a streaking 10-day move to higher highs. 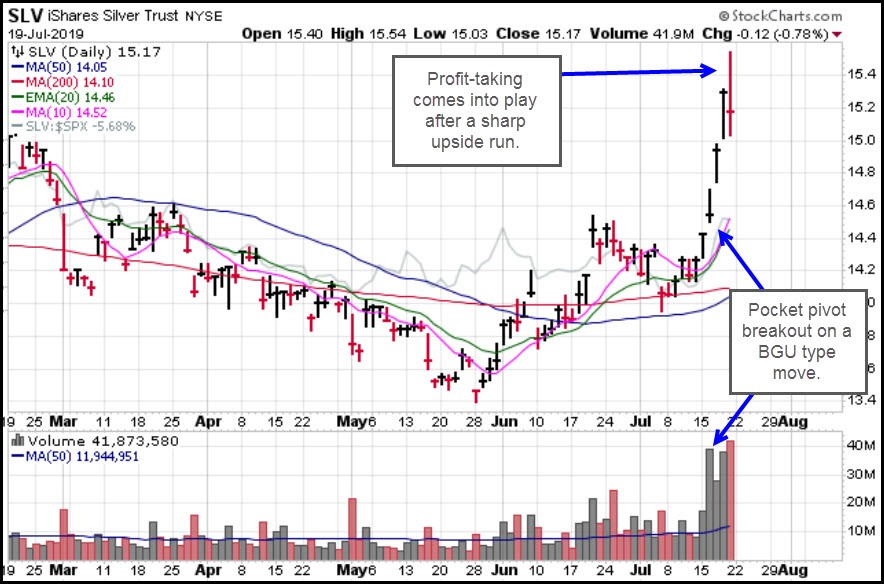 As we move through earnings season, and we see just what the Fed does when they finish their meeting on July 31st, the market seems to have lost some momentum and appears vulnerable to a further pullback. Caution is advised, and investors should review their exit points as appropriate for individual stock positions.
This information is provided by MoKa Investors, LLC DBA Virtue of Selfish Investing (VoSI) is issued solely for informational purposes and does not constitute an offer to sell or a solicitation of an offer to buy securities. Information contained herein is based on sources which we believe to be reliable but is not guaranteed by us as being accurate and does not purport to be a complete statement or summary of available data. VoSI reports are intended to alert VoSI members to technical developments in certain securities that may or may not be actionable, only, and are not intended as recommendations. Past performance is not a guarantee, nor is it necessarily indicative, of future results. Opinions expressed herein are statements of our judgment as of the publication date and are subject to change without notice. Entities including but not limited to VoSI, its members, officers, directors, employees, customers, agents, and affiliates may have a position, long or short, in the securities referred to herein, and/or other related securities, and may increase or decrease such position or take a contra position. Additional information is available upon written request. This publication is for clients of Virtue of Selfish Investing. Reproduction without written permission is strictly prohibited and will be prosecuted to the full extent of the law. ©2022 MoKa Investors, LLC DBA Virtue of Selfish Investing. All rights reserved.
FOR OUR FREE MARKET LAB REPORT :