Focus List Stocks Expected to Report Earnings this Week: Everquote (EVER) on Tuesday after the close, Pan-American Silver (PAAS) on Wednesday before the open, Livongo Health (LVGO) and Silver Standard Resources (SSRM) on Thursday after the close. The list above is sorted by earnings due date with the earliest earnings due dates at the top for easy reference.
Notable Action:
Major market indexes rallied back to the highs of their current price ranges. The NASDAQ Composite Index rallied on Thursday and Friday on successively higher volume, which looks constructive. Friday showed an interesting divergence as breadth was 2148 to 1139 negative. Most of the buying was in heavy index influencers like Apple (AAPL), Amazon (AMZN), and Facebook (FB). AAPL's move on Friday accounted for 273.13 Dow points, which was up 114.67 on the day. AAPL's move essentially kept the Dow from suffering a distribution day, and along with AMZN and FB likely helped do the same for the S&P 500 Index. Breadth on the NYSE was also negative, but only by 1674 to 1259 in favor of the decliners. Despite the divergences, the general market trend remains positive and select long opportunities have been there for the taking. 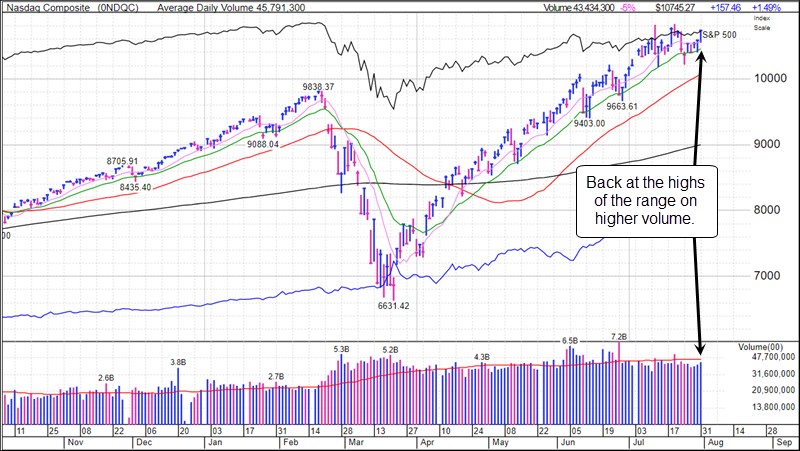 Apple (AAPL), Amazon (AMZN), Facebook (FB), and Alphabet (GOOG) all reported on Thursday after the close, and all but GOOG gapped up on Friday morning. We reported on AAPL's gap-up pre-open on Friday, and it became buyable as a BGU once it set an intraday low at 403.30. Note also that at that point the stock was also a long entry trigger based on Jesse Livermore's Century Mark Rule for the long side once it cleared the $400 Century Mark, and it closed just 62 cents off the intraday high.
Also on Friday: AMZN stalled near prior highs above $3200 closing in the lows of its range. However, it remains an actionable BGU using the 2995.76 intraday low as a selling guide. FB closed at 253.56 so remains actionable as a BGU using the intraday low at 249.00 as a tight selling guide. GOOG bounced off its 50-dma on heavy selling volume Friday does not strike us as attractive here although one could watch for possible U&R long entries showing up if it can clear the lows of its prior base structure. 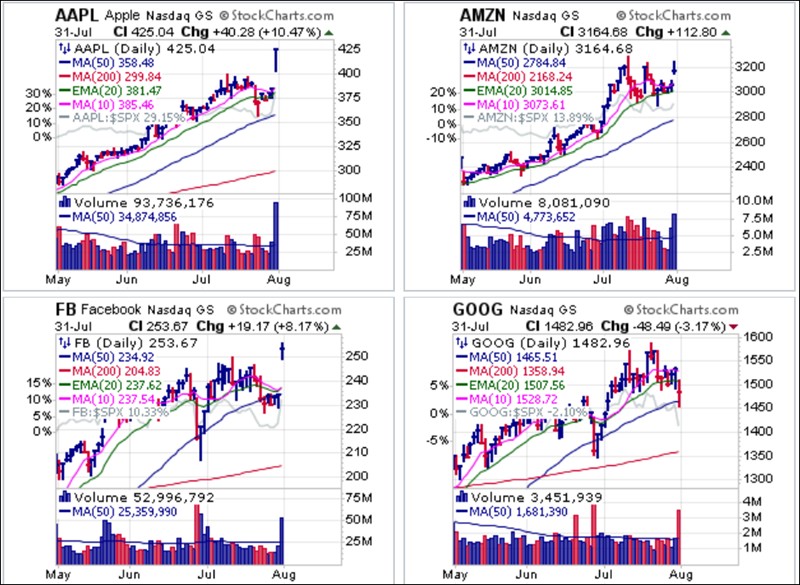 Lululemon Athletica (LULU) and Oracle (ORCL) are at potentially actionable long entry points. LULU is holding tight along its 10-dma and 20-dema where it looks buyable using the 20-dema as a selling guide while ORCL posted a U&R long entry signal on Friday as it undercut and then rallied back above its prior 54.69 July low.This becomes actionable as a long entry signal using the 54.69 price level as a selling guide.

Precious metals and precious metals stocks on the Focus List have been on fire. Kirkland Lakes Gold (KL) reported earnings on Thursday morning and launched higher on Friday. We reported on the stock in our Pocket Pivot Report of July 7th much lower in the pattern. Two other metals names on the Focus List include SSR Mining (SSRM), which was also mentioned in the July 7th Pocket Pivot Report, and Pan-American Silver (PAAS), which was reported on June 22 when it had a BGU then again on July 7 when it had a pocket pivot. 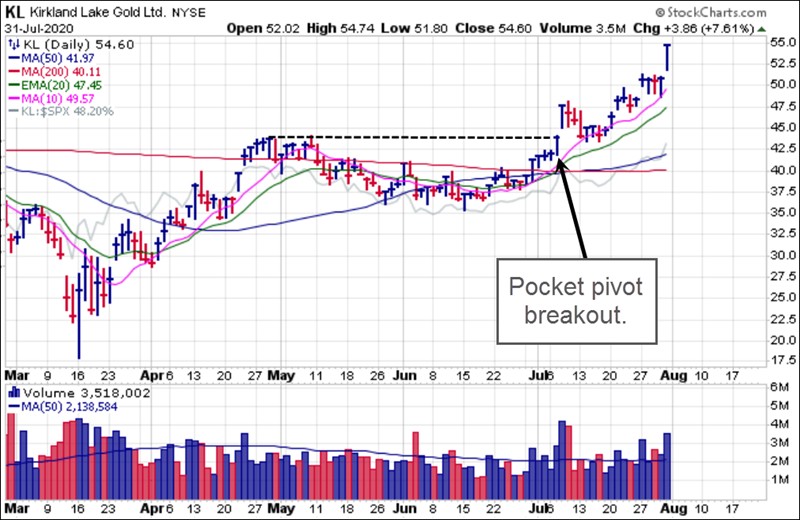 SSR Mining (SSRM) recently changed its name from Silver Standard Resources. Both companies are pulling back into their 10-dmas ahead of their expected earnings reports, PAAS this Wednesday after the close, and SSRM this Thursday after the close.

The moves in precious metals stocks were driven by sharp upside moves in both gold and silver. The Sprott Physical Gold Trust (PHYS) posted an all-time high this week with the near futures contract ending the week at $1994 an ounce. The Sprott Physical Silver Trust (PSLV) posted a nearly seven-year high as the near silver futures contract ended the week at $24.56 an ounce. It briefly rallied above $26 Monday night on news that the U.S. Mint was cutting back production and therefore would only be minting coins from one metal at a time. It has since pulled back and bounced off its 10-dma on Thursday. The metals'  price moves since late June are impressive, and reaction pullbacks as the yellow and white metal digest their heady gains should be expected.

Alternative-currencies are the rage currently, and crypto-currencies are no exception. In our Focus List Review report of exactly two weekends ago, we pointed out the undercut & rally (U&R) long entry in The Grayscale Bitcoin Trust (GBTC) that prior Friday as it undercut and then rallied back above the 9.18 low in the pattern. It has since broken out powerfully, and the initial breakout pulled back for two days in what looked like a normal reaction to a steep move off the lows. To be precise, that move was 43% from the 9.18 U&R long entry point to Tuesday's peak at 13.20. 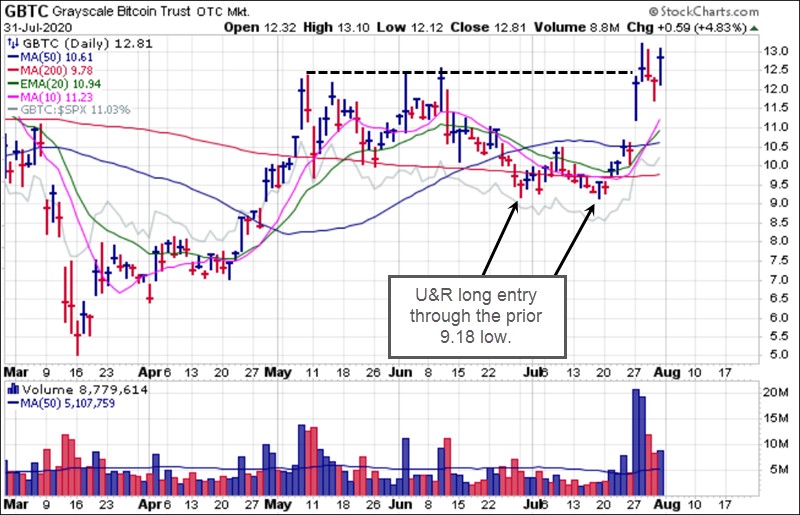 We have been constructive on alternative-currencies for some time now, and the past two weeks have seen both silver and gold as well as Bitcoin all rally sharply. Certainly, the profit opportunities have been for the taking. As the market continues to remain volatile and chameleon-like at times, focusing on where money can be made in the individual set-ups is a concrete approach that simplifies matters in what is a very unique market period.
This information is provided by MoKa Investors, LLC DBA Virtue of Selfish Investing (VoSI) is issued solely for informational purposes and does not constitute an offer to sell or a solicitation of an offer to buy securities. Information contained herein is based on sources which we believe to be reliable but is not guaranteed by us as being accurate and does not purport to be a complete statement or summary of available data. VoSI reports are intended to alert VoSI members to technical developments in certain securities that may or may not be actionable, only, and are not intended as recommendations. Past performance is not a guarantee, nor is it necessarily indicative, of future results. Opinions expressed herein are statements of our judgment as of the publication date and are subject to change without notice. Entities including but not limited to VoSI, its members, officers, directors, employees, customers, agents, and affiliates may have a position, long or short, in the securities referred to herein, and/or other related securities, and may increase or decrease such position or take a contra position. Additional information is available upon written request. This publication is for clients of Virtue of Selfish Investing. Reproduction without written permission is strictly prohibited and will be prosecuted to the full extent of the law. ©2022 MoKa Investors, LLC DBA Virtue of Selfish Investing. All rights reserved.
FOR OUR FREE MARKET LAB REPORT :