The VoSI Focus List is a compilation and reference list of stocks for which Pocket Pivot or Buyable Gap-Up Reports have been issued and which have been deemed suitable for inclusion on the Focus List. Not all stocks for which a Pocket Pivot or Buyable Gap-Up report has been issued will necessarily be added to the list. It is not intended as a "buy list" or a list of immediately actionable recommendations. Stocks on the list may or may not be in proper buy positions, and investors should exercise discretion and proper judgement in determining when and where stocks on the Focus List can be purchased. The following notes are intended to assist in this process. Please note that members can enlarge the Focus List image by clicking on the body of the email and then holding the Control Key while pressing the "+" key until it is large enough to read.
General Observations:
The NASDAQ Composite Index made history on Wednesday by clearing the 10,000 level for the first time in history. It then promptly gapped to the downside on Thursday is a sharp and brutal sell-off on higher volume. Friday saw the market attempt to stabilize as the NASDAQ held between its 10-day simple and 20-day exponential moving averages. Meanwhile, the S&P 500 Index, which had closed below its 200-day moving average on Thursday, regained the line on Friday and held above it by the close. Currently, the market is in a tenuous but fluid situation as the irresistible force of a weak economy battles with the immovable object of Infinite QE. 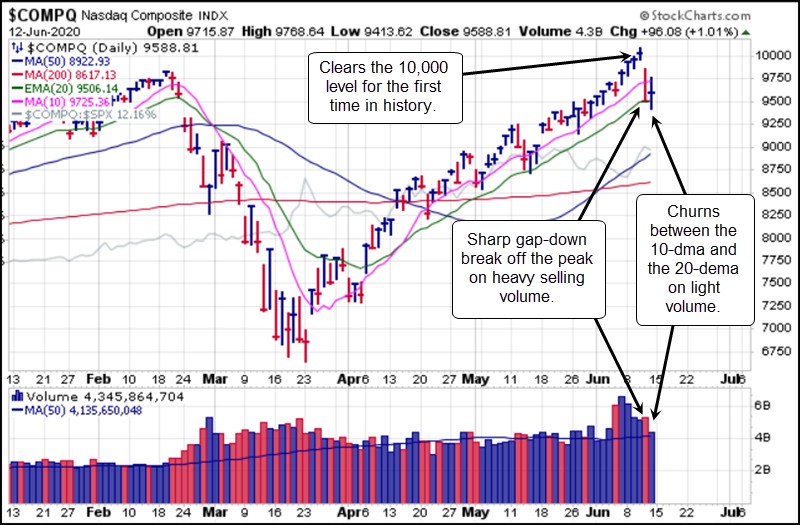 The stage was set for a market pullback amid all the hype and euphoria of the current rally as the NASDAQ pierced the ten millennium mark, sentiment indicators like the VIX and the Put/Call Ratios were at extreme levels, and Bullish Percent Indexes for both the NYSE and NASDAQ were at extreme multi-year highs. Now that the indexes have corrected sharply off their recent highs it remains to be seen whether this is another quick but sharp pullback that merely causes the market to stumble before marching higher in zombie-like fashion. The coming days will likely provide the answer and investors should review their trailing and absolute stops in preparation for any necessary defensive action BEFORE things deteriorate further. Acting out of panic is never advisable and investors can prevent this by having a plan in place ahead of time.

Notable Action:
Stock  on the Focus List were all hit with selling in the latter half of the week. Advanced Micro Devices (AMD) launched higher on Tuesday but found resistance nears its prior range highs and plummeted back to where it began the week along the 50-dma. This may provide a last-stand type of entry using the 50-dma as a selling guide. Everquote (EVER) is holding up above its prior breakout point on a pullback to the 20-dema which offers an entry using the 20-dema as a selling guide.  The same scenario also applies to Facebook (FB) and Microsoft (MSFT) as they test their own 20-demas. 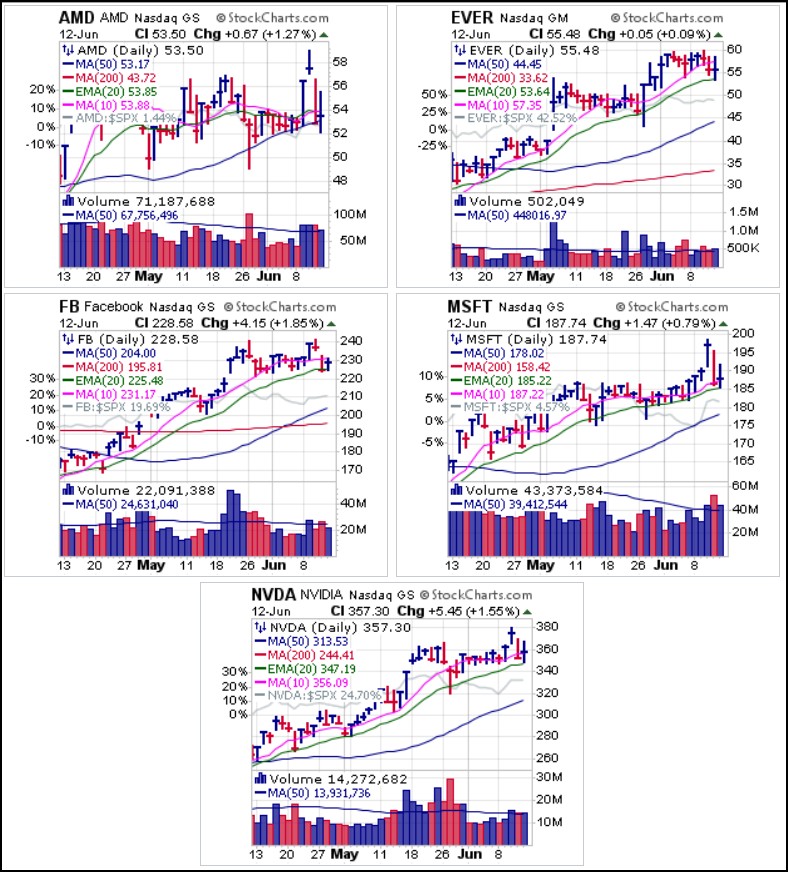 Cisco Systems (CSCO), Intel (INTC), and Oracle (ORCL) all broke hard to the downside after recent pocket pivots and range breakouts. This is bearish action, and in fact both INTC and ORCL were actionable as short-sale entries based on breakout-failure types of short-sale set-ups. Netflix (NFLX) closed below its 50-dma on Friday for the first time since late March. This may offer a short-sale entry using the 50-dma as a covering guide if NFLX cannot recover quickly. It is interesting to note that since mid-April NFLX has not been able to make any significant upside progress despite being an alleged "stay at home" stock. 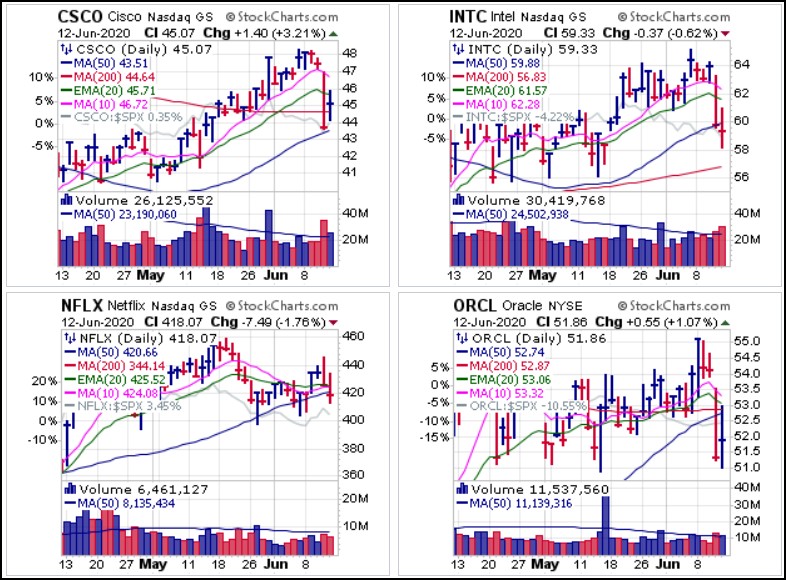 Tesla (TSLA) is an interesting situation after failing to hold the $1,000 Millennium Mark. This is also the Ten Century Mark, and would have triggered Jesse Livermore's Century Mark Buy Rule on Wednesday when this occurred, using the $1,000 price level as a selling guide. TSLA quickly reversed back below the $1,000 level on Thursday, triggering Jesse Livermore's Century Mark Short-Sale Rule when it did so. It then proceeded to move lower on Friday before holding near-term support at the 10-dma. This is now a fluid situation as a breach of the 10-dma could trigger a second short-sale entry signal. If it can hold the line then this may become a lower-risk long entry position using the 10-day line as a selling guide. The bottom line for now is that TSLA triggered as a Century Mark Rule short-sale entry on Thursday and has yet to regain or test the $1,000 level to negate that fact. 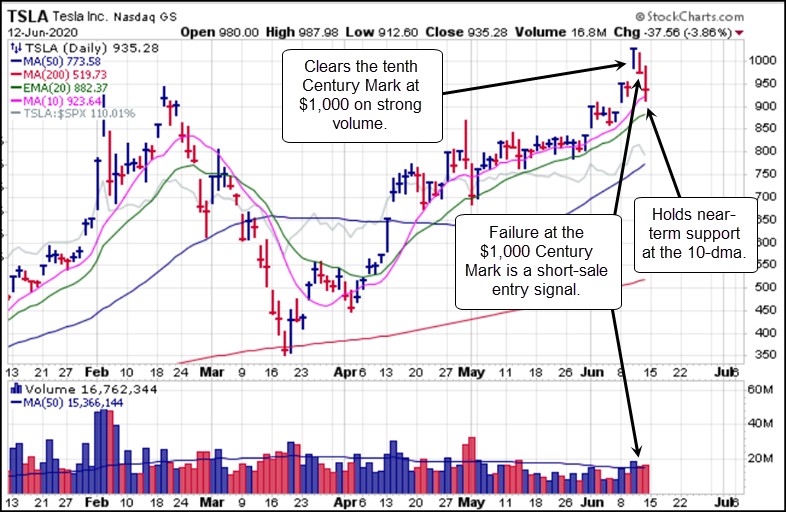 The Sprott Physical Gold Trust (PHYS) and the Sprott Physical Silver Trust (PSLV) remain in choppy consolidations. The PHYS closed just below its 50-dma after reversing on heavy volume Thursday during the big market sell-off. Watch the $1685-$1700 level in the gold futures as near-term support for the yellow metal. Meanwhile, the PSLV pulled into its 20-dema as volume dried up, creating a lower-risk entry at the line. We tend to like the more opportunistic route of looking for pullbacks to the lower 200-dma as better entries if we can get them. In either case, the 200-dma would serve as your maximum selling guide for shares purchased above the line.

The Grayscale Bitcoin Trust (GBTC) sold off hard on Thursday with the general market. It attempted to stabilize on Friday but reversed after an attempt to retake the 20-dema failed. Despite Wednesday's pocket pivot, which took GBTC back to the top of its five-week price range, we tend to prefer the more opportunistic approach of using pullbacks to the 200-dma, where it has found support three times before, as a better entry. 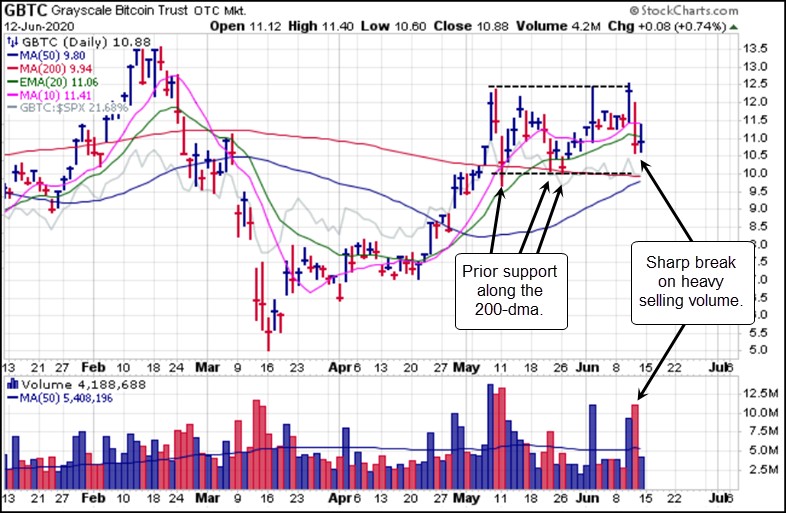