After a brief one-day wonder rally on Wednesday after the Fed policy announcement where rates were increased by a highest-ever 75 basis-points, major market indexes promptly broke to lower lows. Friday's options expiration led to a fair amount of intraday volatility given that $3.4 trillion in notional value of options contracts were expiring that day. By the close, the indexes posted mostly churning action on higher options expiration-related volume. The Market Direction Model (MDM) remains on a SELL signal. 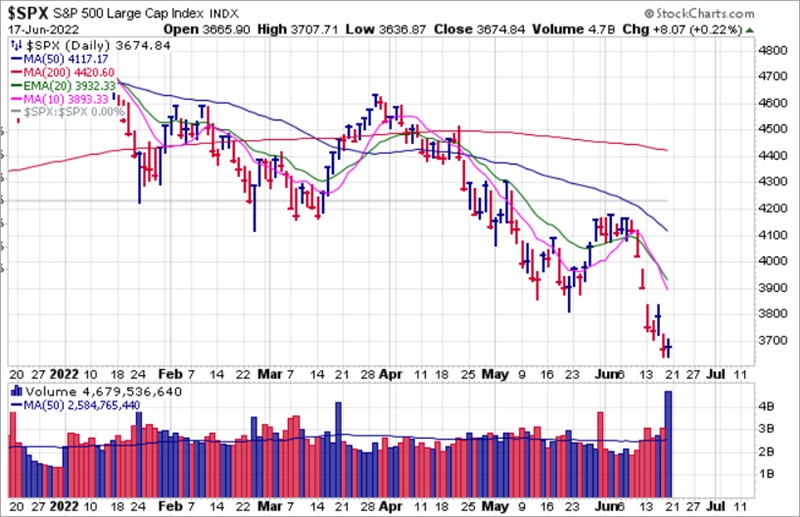 The crypto space continues to vaporize as the true intrinsic value of these mostly smoke-and-mirrors bubble-mania speculative "assets" is finally laid bare. It is important to avoid being blinded by a religious fervor and understand that the move in crypto-currencies correlated precisely to the Fed's commencement of massive money-printing and the government's massive stimulus bills. Taken together, this injected somewhere in the neighborhood of $6-8 trillion in total liquidity, driving what has now become obvious as an Everything Bubble that sent otherwise worthless crypto-currencies on parabolic runs. The weekly chart of Bitcoin ($BTCUSD) reveals a classic Punchbowl of Death formation following a parabolic run-up from mid-2020 into mid-2021 as the Fed opened the liquidity spigots as wide as possible. 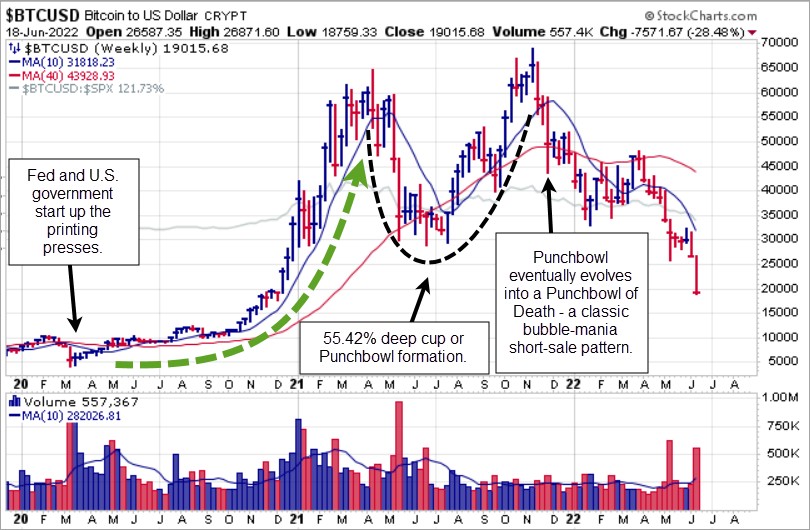 The situation is far worse with the second- and third-tier cryptos such as Solana ($SOLUSD). It is now down over 90% from its late 2021 peak. As I like to say, if it looks, acts, walks, smells, and tastes like a tulip, it's a tulip. 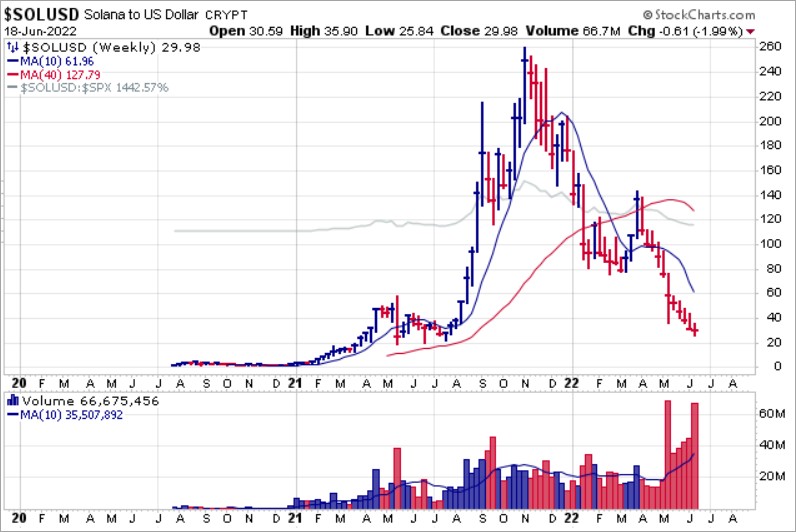 Anecdotally, signs of a crypto top were preponderant in late 2021. We had a multitude of celebrities, from pro football GOAT Tom Brady to actor Matt Damon to actress Reese Witherspoon all admonishing everyone to buy into crypto. Mayors of the cities of New York and Miami, along with certain sports celebrities triumphantly announced they would be taking their pay in Bitcoin. The third-world economic basket case El Salvador announced it was adopting Bitcoin as one of its national currencies and made plans to build a "Bitcoin City," buying up Bitcoin at an average price of $47,000. It has yet to issue $1 billion in bonds it was supposedly going to use to finance the building of this city, and its blatant fiscal irresponsibility has investors selling off El Salvador's other sovereign bonds as they also come crashing down. Los Angeles' Staples Center arena, home of the L.A. Clippers and Lakers basketball teams and L.A. King hockey team sold the naming rights of the arena to Crypto.com for $700 million.
Two new Bitcoin ETFS, the ProShares Bitcoin Strategy ETF (BITO) and the Valkyrie Bitcoin Strategy ETF (BTF) were both launched at or around the top in October and November 2021. 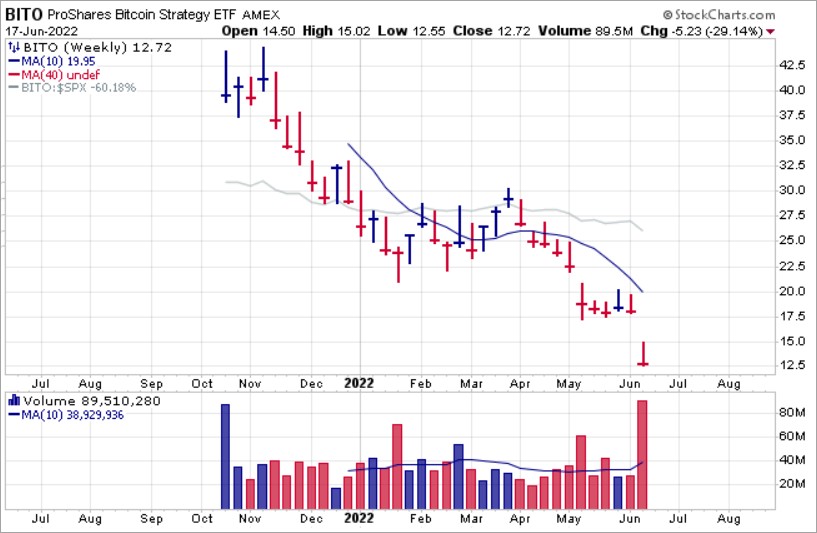 Rather than recognize these events and anecdotal occurrences as evidence of potential danger in the crypto space, the pied pipers of crypto cited them all as affirmations and confirmations of crypto's "to the moon" potential. All of this served to whip investors into a frenzy right at the peak , which in hindsight should have been obvious to those familiar with how such mania-market cycles play out. Thinking that crypto-currencies, of which over 18,000 existed as of March 2022, would be immune to this was the height of naivete. For those of you who follow Gil Morales on Twitter at @gilmoreport, the short-sale set-up right near the peak, essentially a late-stage failed-base and Punchbowl of Death set-up, was obvious in November of 2021.

In 2022 we have seen trillions in wealth evaporate, including over $3 trillion in retirement accounts. Furthermore, the crypto space, worth over $3 trillion at the end of 2021 is now worth less than $1 trillion. Where has all this potential buying power gone? Into thin air, not likely to come back any time soon unless the Fed begins to fire up the printing presses again. But all of this, including further rounds of excessive and extreme money-printing, has the potential to create a variety of unintended consequences which in turn can lead to the appearance of Black Swans. While bear market rallies can occur at any time within an overall macro-downtrend, the massive evaporation of wealth, a.k.a. buying power, may dictate that such rallies remain short. Caveat emptor!
- Gil Morales