The VoSI Focus List is a compilation and reference list of stocks for which Pocket Pivot or Buyable Gap-Up Reports have been issued and which have been deemed suitable for inclusion on the Focus List. Not all stocks for which a Pocket Pivot or Buyable Gap-Up report has been issued will necessarily be added to the list. It is not intended as a "buy list" or a list of immediately actionable recommendations. Stocks on the list may or may not be in proper buy positions, and investors should exercise discretion and proper judgement in determining when and where stocks on the Focus List can be purchased. The following notes are intended to assist in this process. Please note that members can enlarge the Focus List image by clicking on the body of the email and then holding the Control Key while pressing the "+" key until it is large enough to read.
General Observations:
Major market indexes corrected sharply this past week, but as we discussed last week the signs and clues were beginning to pile up. As we noted, the NASDAQ Composite Index was looking like a short on the weak rally into the 20-dema, and indeed this turned out to be the case. Now members see why we have not issued any reports on the long side of this market for some time, and we will continue to refrain from issuing reports when we see nothing that looks attractive on the long side. Some members seem fixated on some idea that we must send out reports constantly, as if there is so much out there just ripe for the picking. As we have stated in prior Focus List Reports, we have not found any names that meet our parameters for inclusion on The Focus List for some time now, and now we see why. 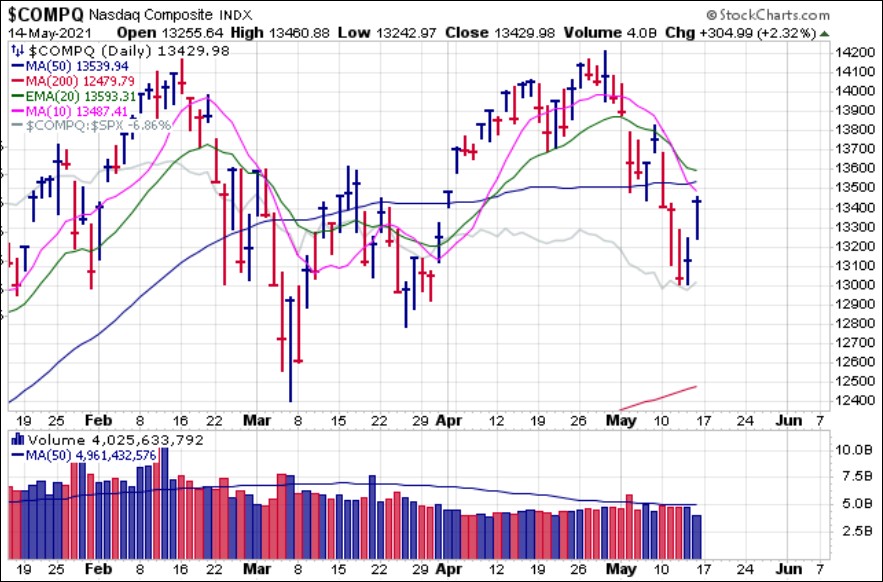 Meanwhile, the NASDAQ has spent the past two days rallying back up towards its 50-dma, where it may run into resistance. The situation remains highly fluid, which also complicates the short side of the market, since trendless volatility rather than a strong trend one way or the other dominates the action. Until we feel that the risk-profile of this market allows for greater conviction on either the long or short side we prefer to err on the side of not leading members over a cliff, period. We will not engage in a steady spewing of meaningless reports to satisfy the ill-perceived needs of those who feel that we are somehow obligated to do so. Rather, consider this: when there is nothing to do, DO NOTHING. That alone is worth its weight in gold as not losing money doing nothing is far better than losing money chasing bad trades.
The Market Direction Model (MDM) switched to a CASH/NEUTRAL signal on Wednesday.

Only three securities have remained on the Focus List for many weeks now, and we may soon see it whittled down to two. Bitcoin has been faltering as of late and objectively is currently playing out as a late-stage failed-base short-sale set-up. The late-stage breakout in mid-April, amid much hype and hoopla that Bitcoin was imminently headed for $100,000 failed quickly sending the crypto-currency to lower lows where it temporarily found its feet, posted a U&R at the prior March low, and rallied back up to and just beyond the 50-day moving average. After some choppy action around the moving average, it failed this past week and is now retesting the prior April low. The recent breakdown has been attributed to Tesla (TSLA) announcing that it would no longer accept Bitcoin as payment for its vehicles, citing environmental concerns. This seems more like cover for the fact that accepting a currency or medium-of-exchange that fluctuates 20% or more in just a few days as payment for its goods or services is perhaps not a sound business practice, and it may be that TSLA had second thoughts about its original policy. If indeed the break was caused by unfounded "enviro-concerns" then Bitcoin should bounce back quickly. If not, then there may be other forces at work, and any sensible trader will act based on the price/volume action and their own well-considered risk-management plan. 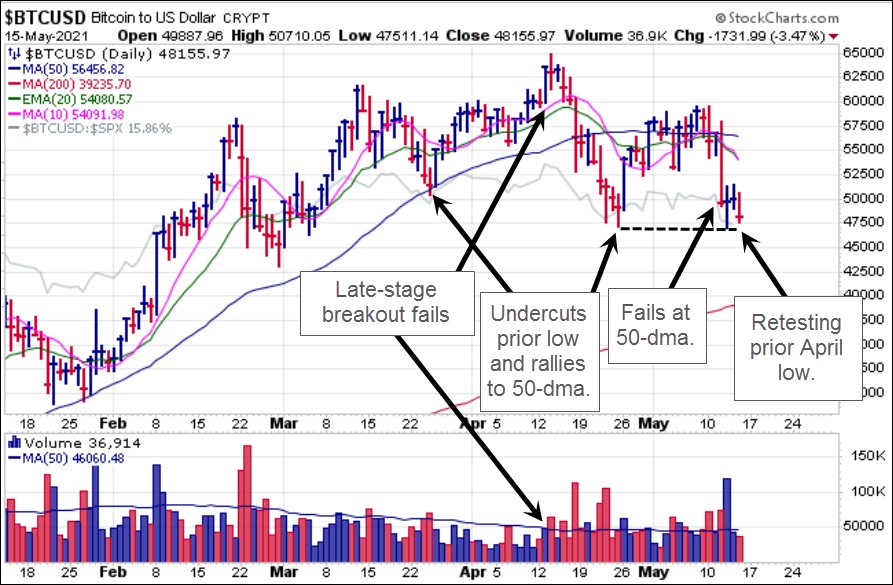 The weakness in Bitcoin shows up more starkly on the chart of the Grayscale Bitcoin Trust (GBTC). It ran into steady resistance along its 50-day moving average before breaking below both its March and April lows. It is now attempting a U&R move off the late April low, but thus far this has had little upside thrust. This is a sick chart, and one must heed their risk-management plan if long GBTC at this stage. 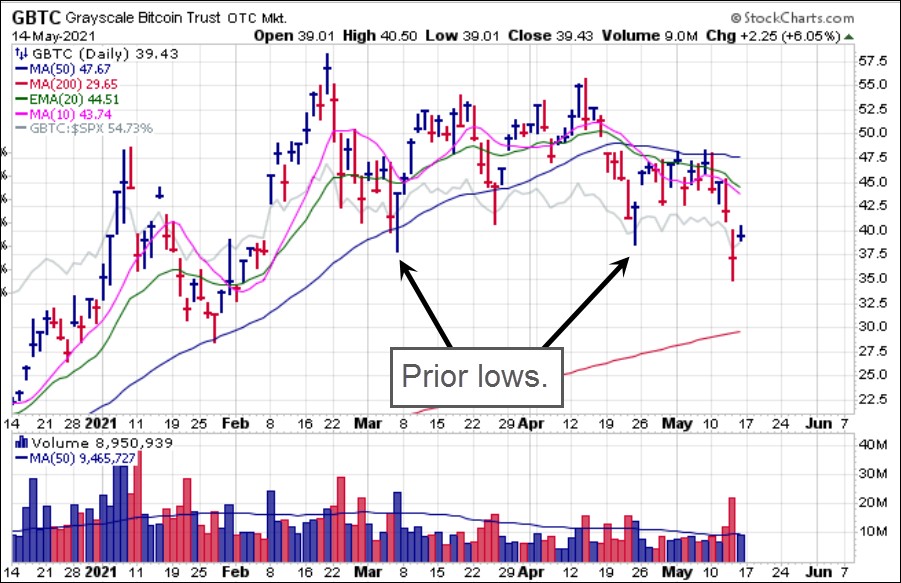 So far, on- and off-chain metrics have been good at identifying major cycles and corrections within bull cycles. Nevertheless, one metric known as pi currently suggests a possible major top. The past times that the 111dma (orange line) crossed up above the 350dma x2 (green line), it signaled a market top.

In addition, Bitcoin is close to its 21-week ema which would suggest the top is in for Bitcoin if it moves below it then cant close above it based on its trading history since 2016. 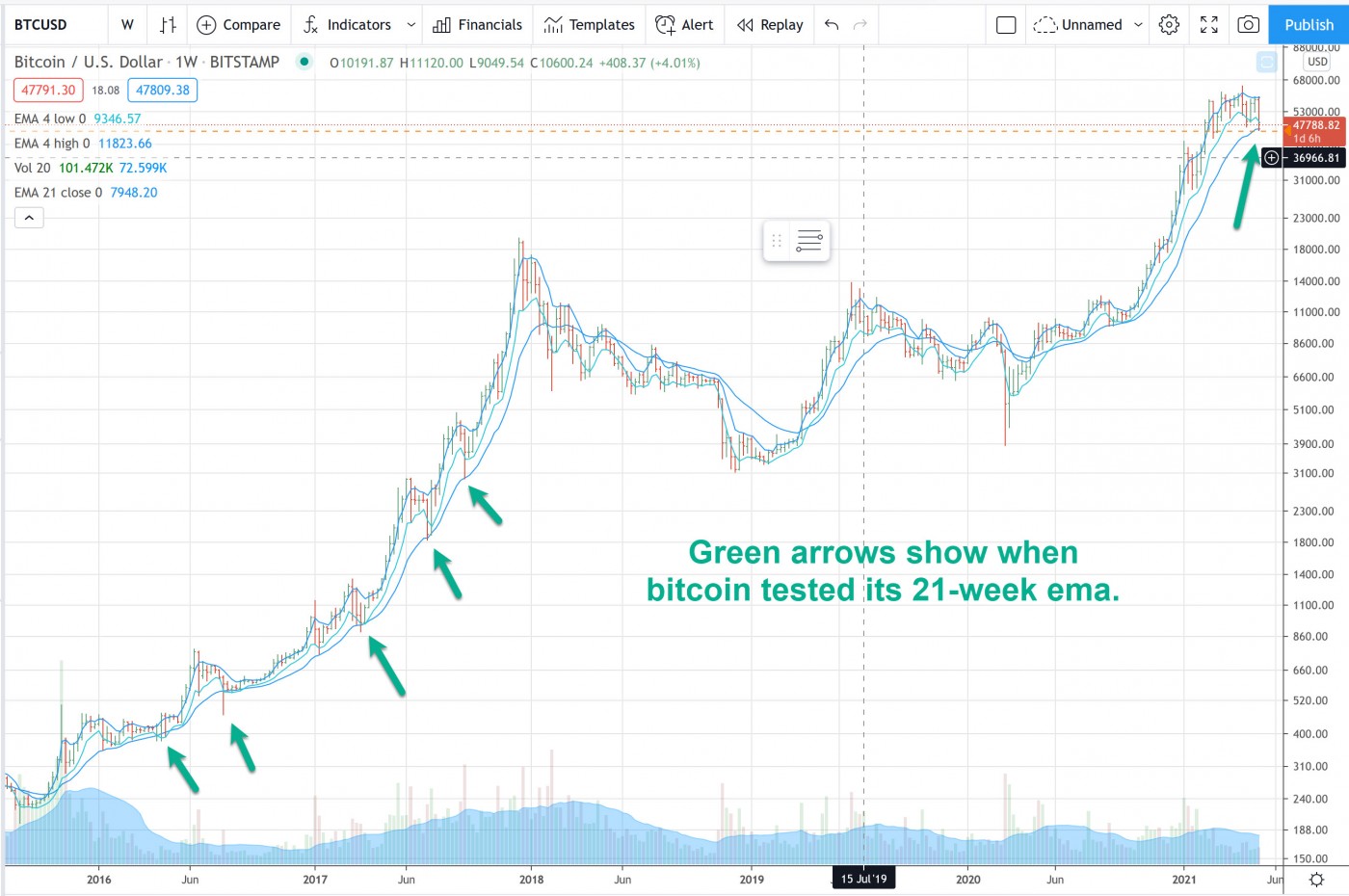 But both indicators cannot account for the fundamental differences between today's market and prior markets. Institutions and companies are onboarding cryptocurrencies. DeFi is a game changer for the financial system. NFTs represent an evolutionary jump in property rights.

In addition, we have a backdrop of reliable metrics such as S2F (stock-to-flow) that suggest the bull market is far from over, but instead, we are in a typical sharp correction within the confines of a bull market. Bitcoin had several such corrections in both the bull markets of 2012-2013 and 2016-2017 before it had a major top. Note how Bitcoin has always overshot the S2F line in prior bull markets.

Another fundamental difference between today's and prior bull markets is that Ethereum and related top alt coins may be attracting capital away from bitcoin on a longer term basis. They finally are showing transformational use cases with huge utility compared to prior bull markets such that institutions are now looking to buy and companies are looking to onboard. The recent launch of Ethereum ETFs only help fuel the supply shortage of Ethereum.

While Bitcoin has been lagging as of late, this also occurred in mid-2017 for nearly two months. Currently, bitcoin has been sideways since mid-February, or about 3 months. Other flagship coins such as Ethereum and Binance (BNB) have been trending higher. As a consequence, Bitcoin dominance has fallen sharply. This is similar to what happened in 2017. 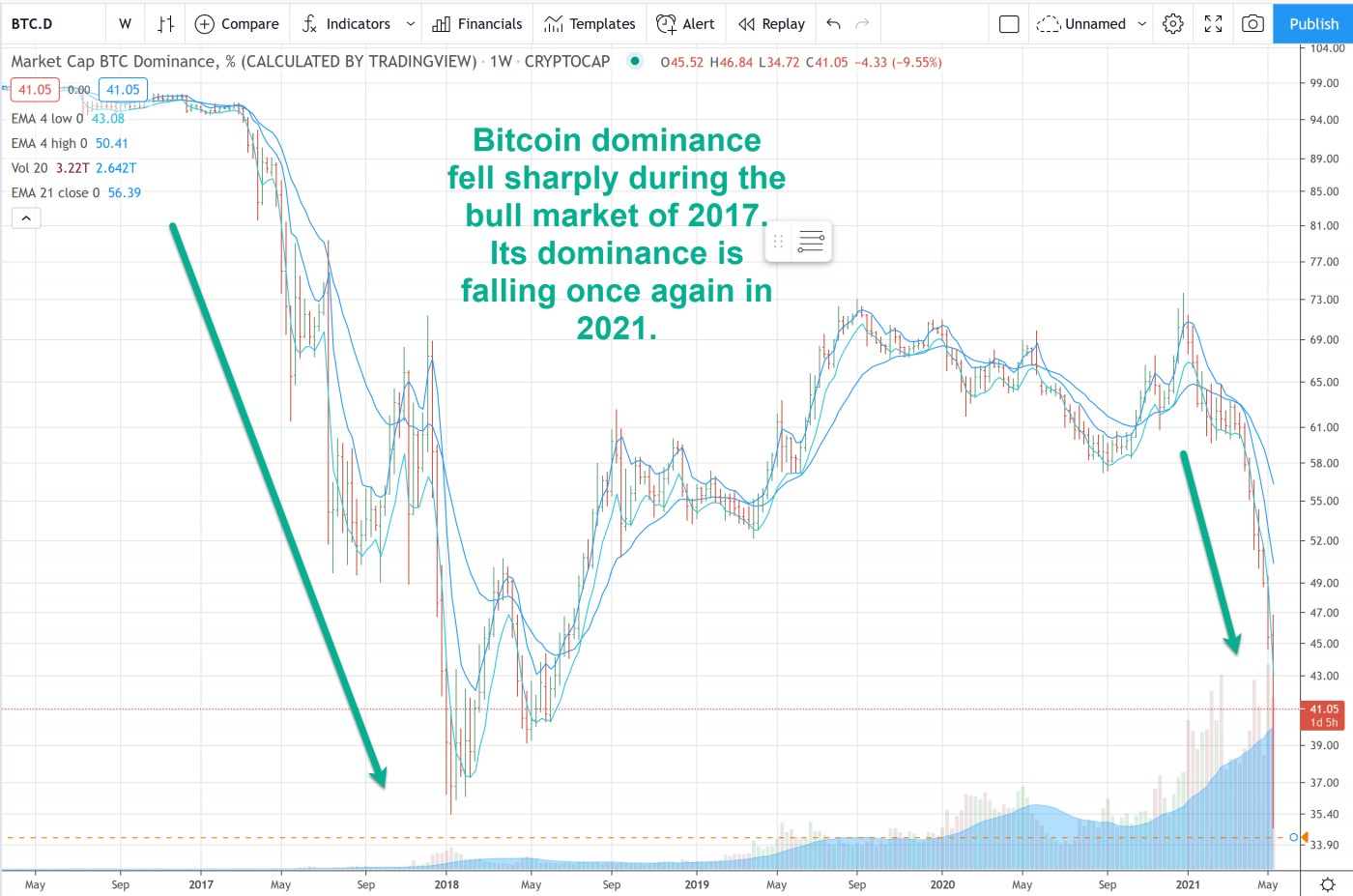 This is another clue that the alt coin season may be far from over.

Meanwhile, M1 and M2 have been soaring and should continue to soar with Biden's proposed $6 trillion across three stimulus packages and 84 other central banks around the world following suit with their supercharged easy money policies. This remains bullish for stocks, precious metals, hard assets, and especially Bitcoin as it is disinflationary.

As Bitcoin struggles, precious metals have continued to rise off their March lows, where they originally posted U&R moves. The Sprott Physical Gold Trust (PSLV) finally cleared its 200-day moving average Friday on strong volume. It remains in a steadily accelerating uptrend. 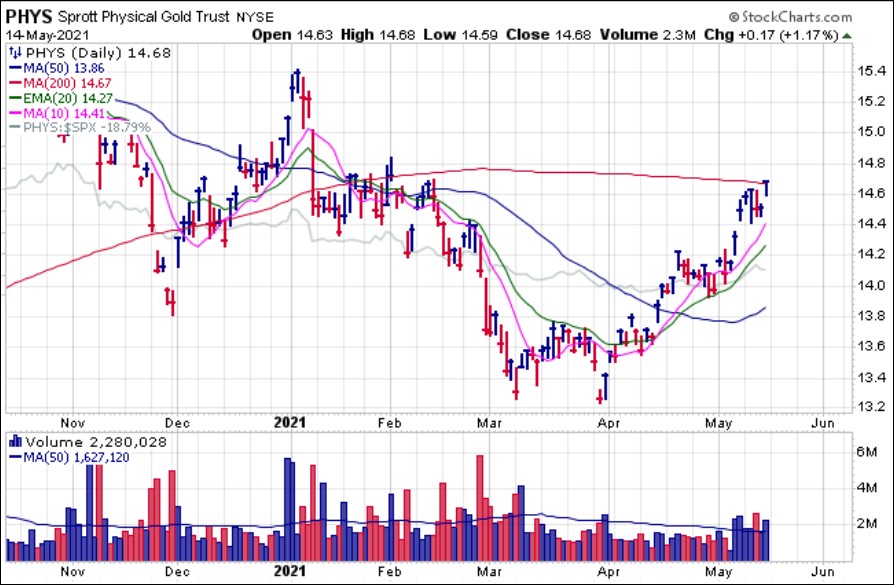 Silver has outperformed gold since late November 2020, when it bottomed and began moving higher while gold continued to make lower lows into March. A brief burst to the upside during the infamous "Silver Squeeze" in late January that never happened led to a correction that ended with a shakeout at the 200-day moving average that coincided with a U&R at the prior early-March low. Since then the Sprott Physical Silver Trust (PSLV) has trended steadily higher as it now forms a short handle in a cup-with-handle type of formation. 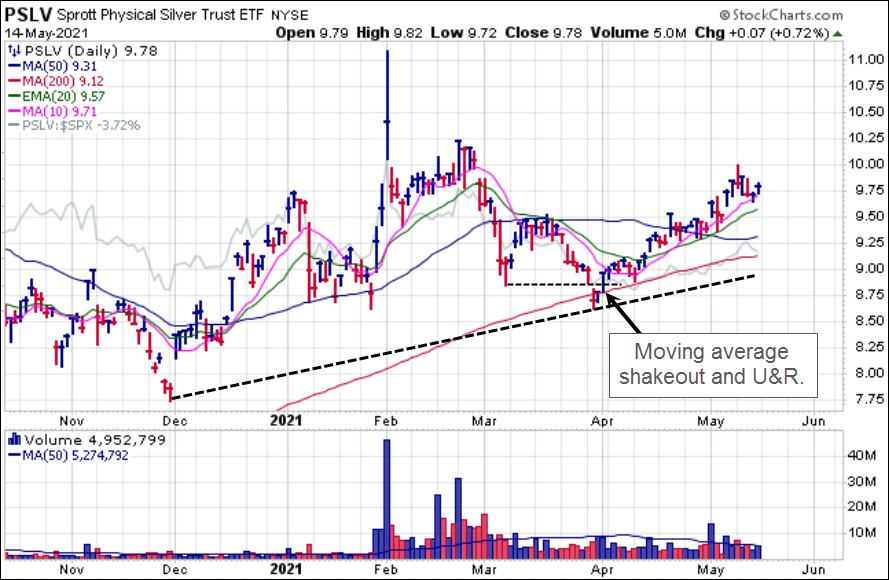 This remains a challenging environment on all fronts, and we will maintain the integrity of our reports by refraining from sending out any reports unless we feel a compelling idea is being presented. Until the market sheds its trendless, volatile character, this will remain the case for now.
This information is provided by MoKa Investors, LLC DBA Virtue of Selfish Investing (VoSI) is issued solely for informational purposes and does not constitute an offer to sell or a solicitation of an offer to buy securities. Information contained herein is based on sources which we believe to be reliable but is not guaranteed by us as being accurate and does not purport to be a complete statement or summary of available data. VoSI reports are intended to alert VoSI members to technical developments in certain securities that may or may not be actionable, only, and are not intended as recommendations. Past performance is not a guarantee, nor is it necessarily indicative, of future results. Opinions expressed herein are statements of our judgment as of the publication date and are subject to change without notice. Entities including but not limited to VoSI, its members, officers, directors, employees, customers, agents, and affiliates may have a position, long or short, in the securities referred to herein, and/or other related securities, and may increase or decrease such position or take a contra position. Additional information is available upon written request. This publication is for clients of Virtue of Selfish Investing. Reproduction without written permission is strictly prohibited and will be prosecuted to the full extent of the law. ©2022 MoKa Investors, LLC DBA Virtue of Selfish Investing. All rights reserved.
FOR OUR FREE MARKET LAB REPORT :