The market posted its third sharp two-day sell-off in a month on Tuesday and Wednesday of this past week. The prior two sell-offs led to higher highs. Volume was higher thanks to options expiration on Friday as the indexes shrugged off an early downside move as they did on Thursday to close positive. 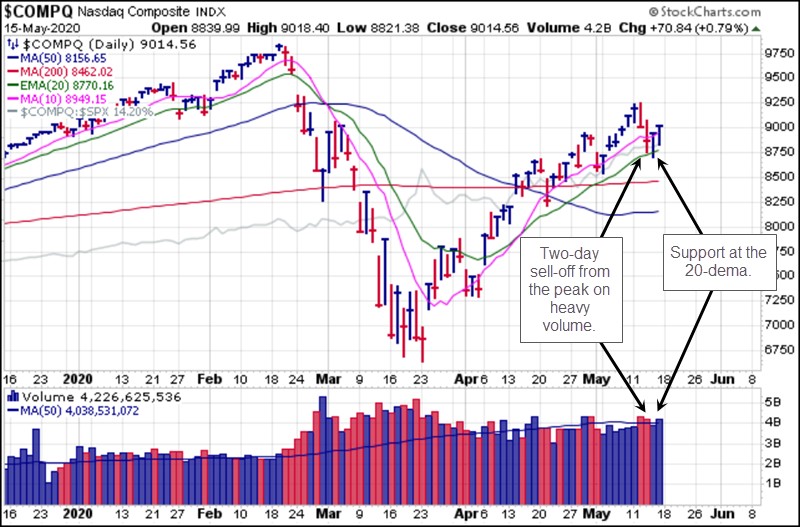 The Market Direction Model (MDM) remains on a CASH/NEUTRAL signal.

One of the big stories of the week was the accelerating upside move in silver as it makes an attempt at catching up to its cousin, gold, and do a little work on narrowing the historically high gold-to-silver ratio. The Sprott Physical Silver Trust (PSLV) posted a buyable gap-up on Friday as volume spiked. We had already reported on a pocket pivot at the 50-dma two Fridays ago, so members could have been well-positioned to participate in Friday's move. Physical silver prices remain at a hefty premium to the futures and other paper silver prices, including ETFs. One-ounce Silver Eagle coins are going for $25-26 each with newly-minted 2020 Silver Eagles garnering the highest prices. 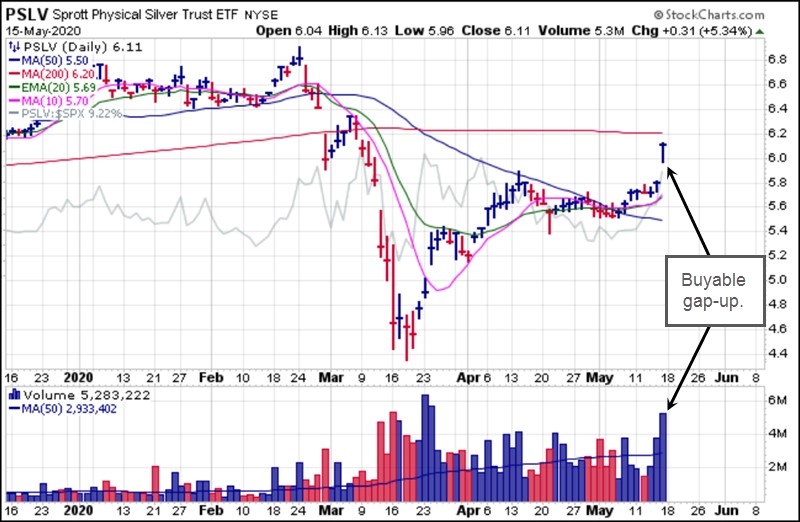 The Sprott Physical Gold Trust (PHYS) matched its prior seven-year closing high on Friday, finishing the week at 13.98. Meanwhile, the SPDR Gold Shares (GLD) posted its highest price level since January 2013 as gold futures pushed above $1750 an ounce. If our premise for the metals is correct, we should eventually see a breakout through the $1800 level, perhaps sooner than later considering that the U.S. Treasury will be selling nearly $1 trillion in new debt issuance over the next 30 days, something it has never done before. 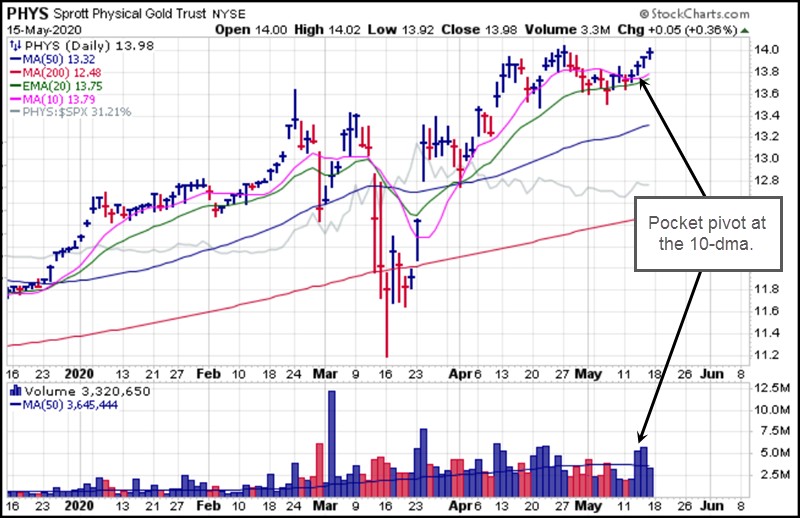 The Grayscale Bitcoin Trust (GBTC) last pulled into its 200-dma on Monday, which we reported on as a reasonable add/entry point for the Bitcoin derivative at that time. It has since rallied back to last week's highs and is now backing down to the 10-dma as volume declines. Since Bitcoin tends to be volatile, we would not be surprised to see GBTC retest the 200-dma, but if it can hold the 10-dma in constructive fashion that may be indicative of further upside from here. 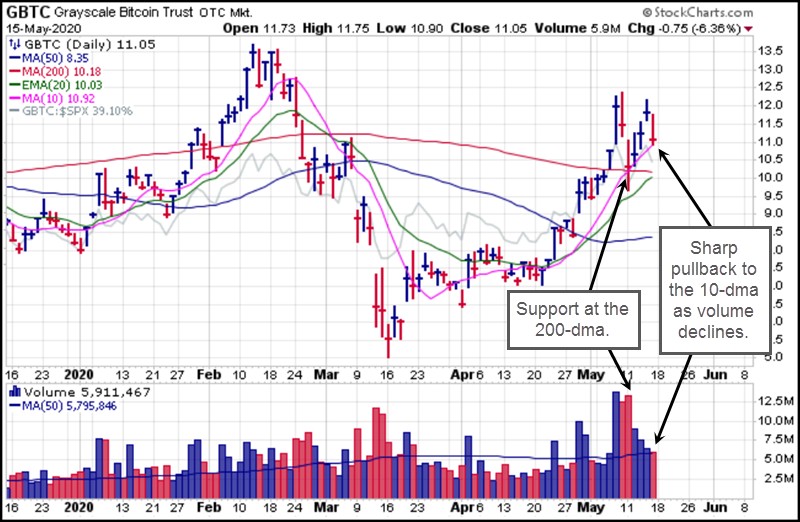 Big-stock NASDAQ names also fit this theme of alternative-currencies, and we previously reported on Intel (INTC) and Netflix (NFLX). NFLX posted a new high on Friday on weak volume, but in fact posted a pocket pivot at the 10-dma on Thursday. Earlier in the week we reported on Facebook (FB) and Google (GOOG) as being potentially buyable along their 10-day simple and 20-day exponential moving averages. Both stocks regained their 10-dmas later in the week, but it was GOOG that met up with its 20-dema and then bounced. After stock have been in prolong uptrends of nearly two months off the March lows, the 10-dma may not offer solid support and we prefer to look for pullbacks to the 20-dema as potential long entry points. 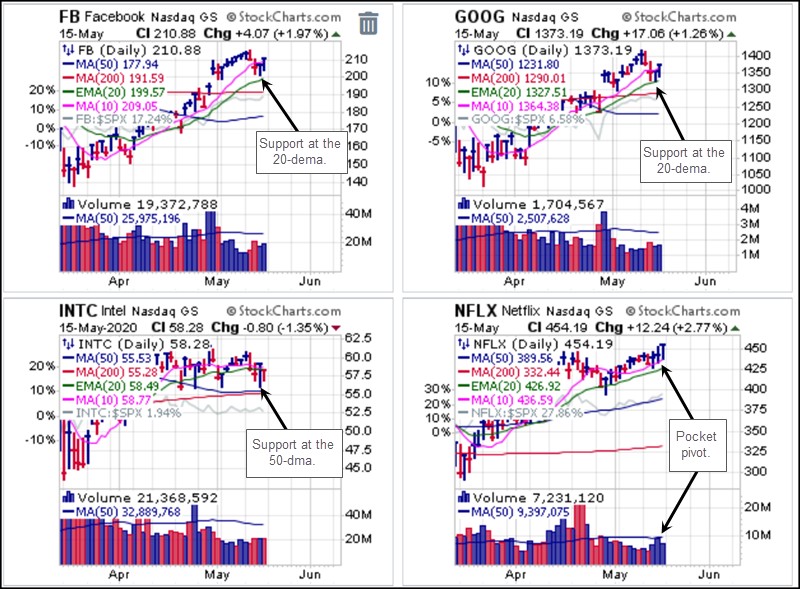 Immense amounts of QE have already been pumped into the system by the Fed which has seen its balance sheet reach $6.7 trillion. Meanwhile the U.S. Treasury is set to borrow $3 trillion in the second fiscal quarter of 2020, according to current estimates, which will likely necessitate more Fed money-printing in a continuing pattern of monetizing the massively growing U.S. debt. This is the essence of the Alt-Currency Theme - monetizing debt will eventually debase the dollar, leading to the rise of alternative currencies. This is why we have favored gold, silver, and Bitcoin since last year. 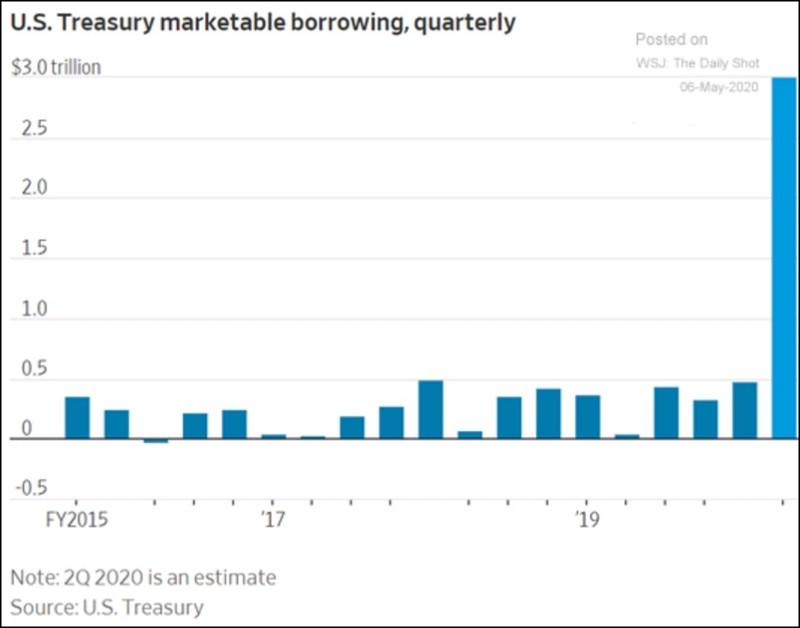 Stocks can also function as alternative currencies. This may be why, in the current environment, Apple (AAPL), Microsoft (MSFT), Amazon (AMZN), Alphabet (GOOG), and Facebook (FB) collectively account for a 21.1% weighting in the S&P 500 ETF (SPY) and a massive 45.6% weighting in the NASDAQ 100 ETF (QQQ). They are dominant, long-term established companies that are not likely to go out of  business any time  soon, and thus function as alternative stores of value. This is why we refer to them as "alt-currency stocks." Thus, this "Fantastic Five" group of big-stock NASDAQ names are likely to serve as key barometers for the current rally off the March lows and if they keep rallying the market is likely to do so as well. If these names begin breaking down, initially by breaking near-term support at their 20-demas, then that may have bearish implications for the market. Have a great trading week!
This information is provided by MoKa Investors, LLC DBA Virtue of Selfish Investing (VoSI) is issued solely for informational purposes and does not constitute an offer to sell or a solicitation of an offer to buy securities. Information contained herein is based on sources which we believe to be reliable but is not guaranteed by us as being accurate and does not purport to be a complete statement or summary of available data. VoSI reports are intended to alert VoSI members to technical developments in certain securities that may or may not be actionable, only, and are not intended as recommendations. Past performance is not a guarantee, nor is it necessarily indicative, of future results. Opinions expressed herein are statements of our judgment as of the publication date and are subject to change without notice. Entities including but not limited to VoSI, its members, officers, directors, employees, customers, agents, and affiliates may have a position, long or short, in the securities referred to herein, and/or other related securities, and may increase or decrease such position or take a contra position. Additional information is available upon written request. This publication is for clients of Virtue of Selfish Investing. Reproduction without written permission is strictly prohibited and will be prosecuted to the full extent of the law. ©2023 MoKa Investors, LLC DBA Virtue of Selfish Investing. All rights reserved.
FOR OUR FREE MARKET LAB REPORT :