The VoSI Focus List is a compilation and reference list of stocks for which Pocket Pivot or Buyable Gap-Up Reports have been issued and which have been deemed suitable for inclusion on the Focus List. Not all stocks for which a Pocket Pivot or Buyable Gap-Up report has been issued will necessarily be added to the list. It is not intended as a "buy list" or a list of immediately actionable recommendations. Stocks on the list may or may not be in proper buy positions, and investors should exercise discretion and proper judgement in determining when and where stocks on the Focus List can be purchased. The following notes are intended to assist in this process. Please note that members can enlarge the Focus List image by clicking on the body of the email and then holding the Control Key while pressing the "+" key until it is large enough to read.
General Observations:
The major market indexes remain in short, two-week price ranges, with the Russell 2000 Index being the only exception as it remains in new-high price territory after breaking out the previous week. The NASDAQ Composite Index closed the week at the highs of its current two-week price range, churning on light, pre-holiday volume. A resolution to this short consolidation one way or another may be forthcoming shortly, or we may simply see things continue to tighten up in constructive fashion. In any case, it is more a matter of watching what individual stocks are doing, and this past week has seen some strong movement in at least half of the names currently on the Focus List. 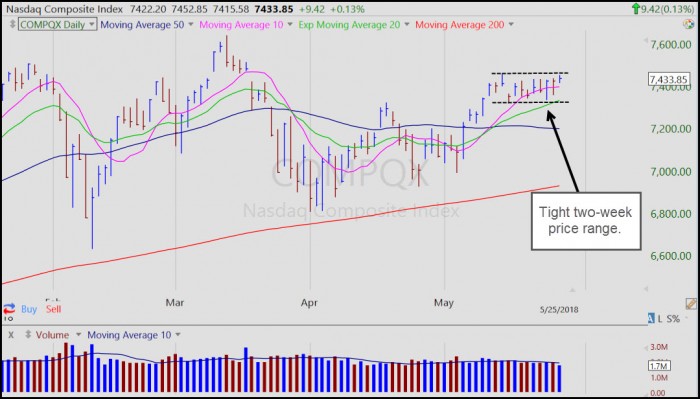 Notable Action:
Three out of the six stocks currently on the Focus List ended the week at new all-time highs. Netflx (NFLX) broke out on Wednesday on a pocket pivot move, but had already posted a more subtle pocket pivot the day before at the 10-dma. Baozun (BZUN) broke out last week following earnings, pulled back to its original breakout point once, and then launched to new highs. Fortinet (FTNT) posted a new all-time closing high on Thursday on a strong pocket pivot move off the 10-dma. It was previously buyable along the 20-dema per our prior daily morning notes earlier this past week.

Given the choppy, wide-ranging general market action, we have insisted on quality over quantity, while seeking to keep matters simple for members in terms of the number of quality names one must follow. So far, we believe the action in these three names helps to bear this out. Members looking for more unorthodox swing-trading or Ugly Duckling types of set-ups should refer to the VoSI VooDoo Report.

Roku (ROKU) is a great example of the types of off-beat ideas discussed in the VooDoo Report. The stock was mentioned in the new VooDoo Video Reports several times over the past two weeks as it pulled into its 50-dma on very light voodoo volume signatures which provided lower-risk entries along the line. Buying into those pullbacks finally came into full fruition on Friday as ROKU launched to higher highs on big volume. 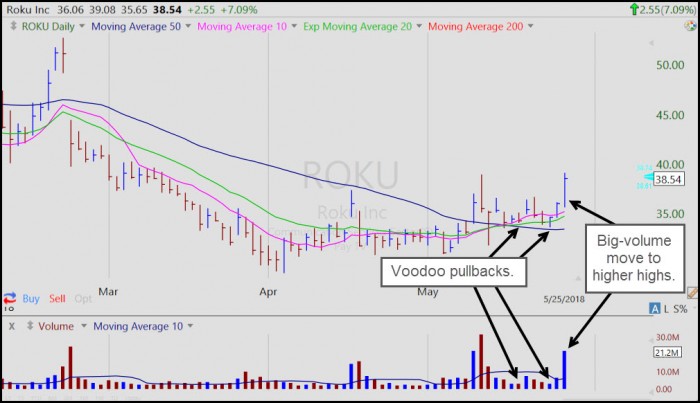 Getting back to our Focus List names, we can see that the remaining three may be setting up for possible breakouts, and we would expect such breakouts to coincide with a movement of the major market indexes, most notably the NASDAQ, up and out of their current two-week price ranges. Amazon.com (AMZN) could very well be considered the fourth Focus List name to have achieved a new high this past week since it did in fact post a new all-time closing high on Friday on weak volume. After failing on a previous gap-up breakout after reporting earnings in late April, AMZN has since gone tight sideways as it builds the long handle of a cup-with-handle formation. Had Friday's breakout occurred with more volume it would have been actionable as such. However, pullbacks to the 10-dma or 20-dema would certainly provide lower-risk entries within the handle as the stock looks likely to break out IF we see the general market do the same. 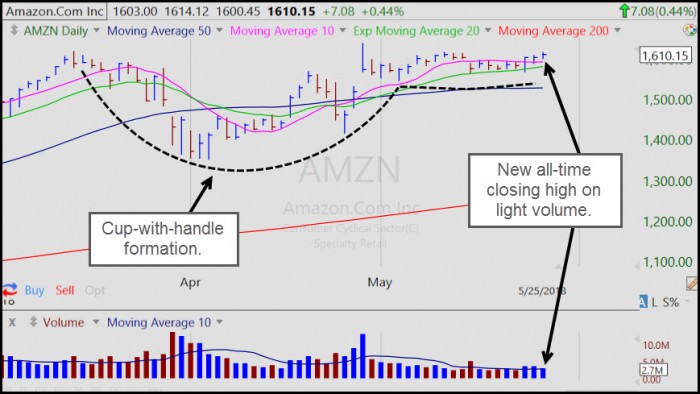 Nvidia (NVDA) remains somewhat on the fence, so to speak, as it regains its 10-dma on light volume. Like AMZN, it failed on a recent breakout attempt after reporting earnings, although the breakout occurred prior to its earnings report. That breakout also occurred on a nearly straight-up-from-the-bottom move off the lows of is base, so the breakout failure is perhaps not surprising. It is now trying to hold along its 20-dema and just below the prior breakout point. Thus, like NFLX prior to this past week. NVDA may be setting up for its own re-breakout type of move. 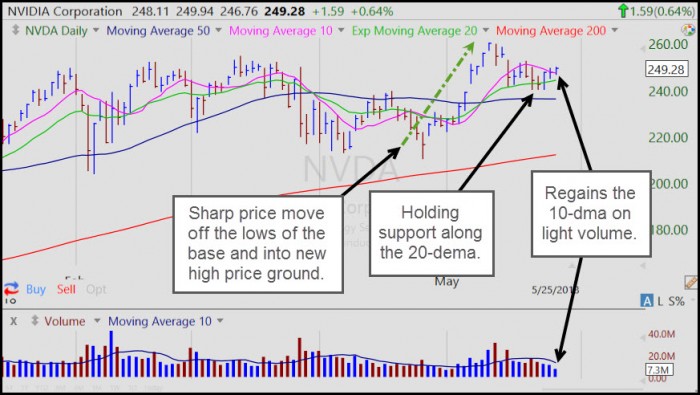 Square (SQ) is forming a cup-with-handle formation, and has run into resistance three times at the left-side peak of the cup. On the weekly chart, not shown, the last three weeks have shown higher closes, thus the stock has technically not formed a bona fide handle since we should see some down weeks in the handle. This may imply that another test of the 20-dema is likely, at which point we would look for a more opportunistic entry to show up. 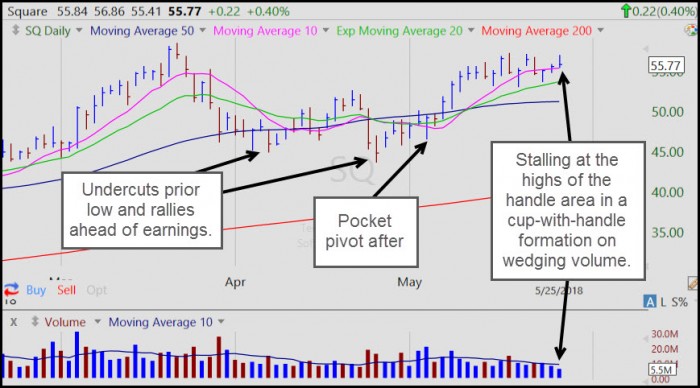