A two-day sell-off early in the week took the indexes down but on Friday the NASDAQ Composite and S&P 500 Indexes recovered back above their 10-day moving averages on higher volume. Given that the prior rally tracked at an identical and very steep angle with the 10-day line, an eventual pullback that breaches the line, as it did on Wednesday, is not unusual. This may be the start of a period of consolidation, at least as the index works off the froth of the prior steep run off the early October lows. For now, the market uptrend remains intact unless and until we begin to see the pattern of higher highs begin to shift to lower lows. 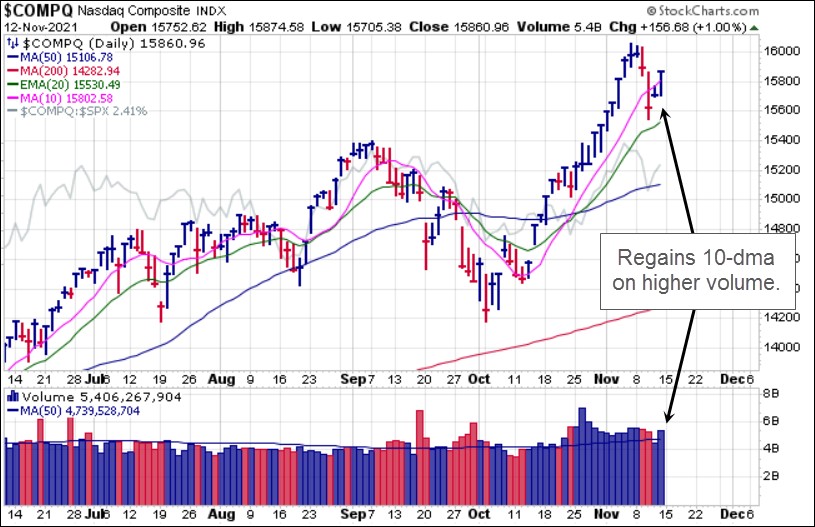 Bitcoin ($BTCUSD) has failed on a recent breakout to new highs and is now pulling in to test its 20-dema. It is possible that this pullback to the 20-day exponential moving average, if it holds, offers a lower-risk secondary entry using the line as a selling guide for portions of one’s position purchased at these levels. A break below the 20-dema, however, could trigger a short-sale entry if it occurs, so we would keep a close eye on how $BTCUSD acts here at 20-dema support. 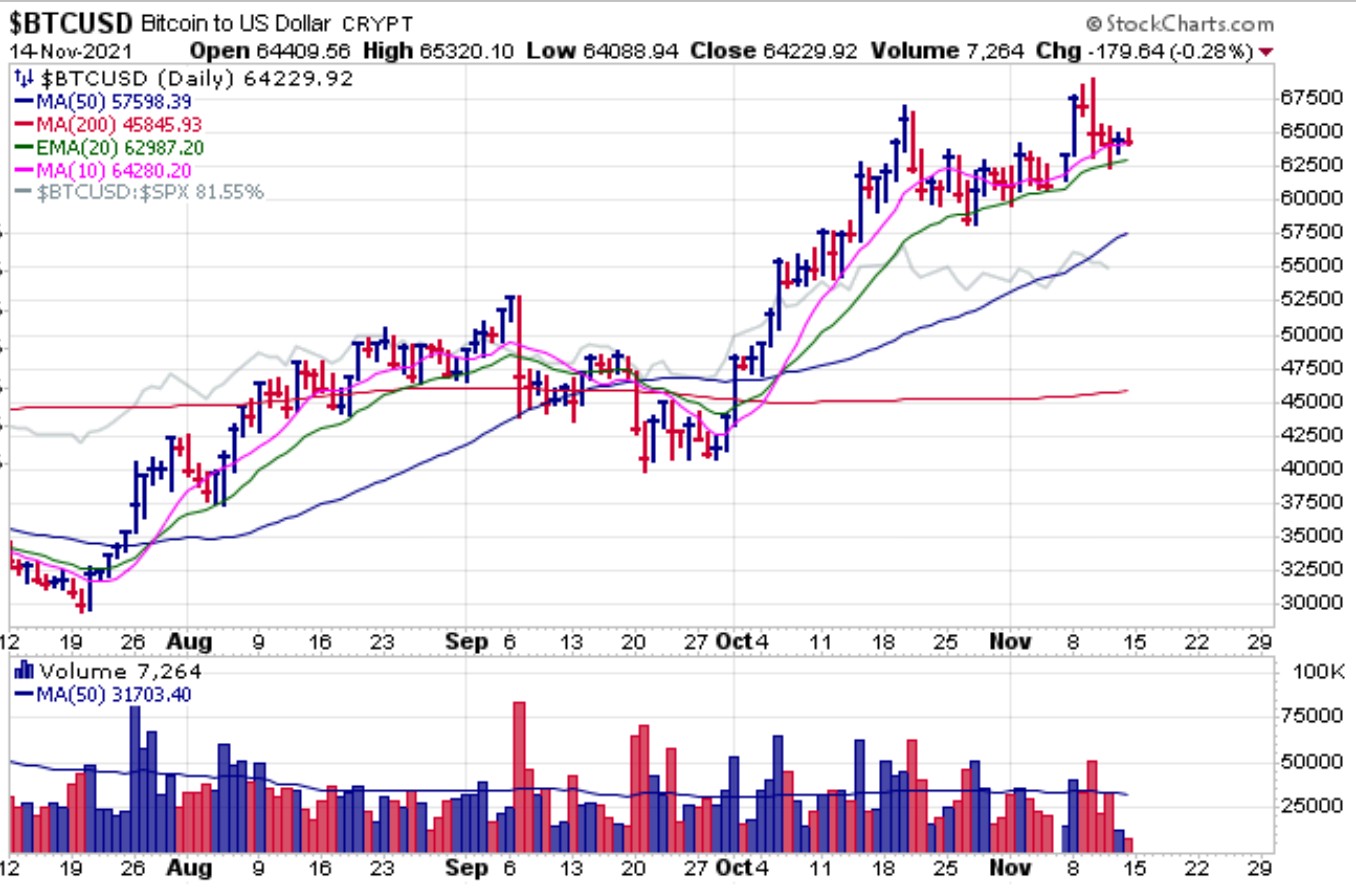 Coinbase Global (COIN) reported earnings this past Tuesday after the close and gapped down on Wednesday before finding support at its 20-day exponential moving average. The stock has had a big run since we first reported on its pocket pivots down along the 50-day moving average so is entitled to some backing and filling. COIN will also tend to correlate somewhat with Bitcoin, but from a purely technical viewpoint we would consider pullbacks to the 20-dema as potential lower-risk long entry opportunities with the idea of using the line as a tight selling guide. On the fundamental front, COIN is  launching a marketplace for NFTs. The CEO along with a number of other notables including the buyer of one of Beeple’s digital works of art for $69 million believes that the aggregate value of NFTs will exceed that of all other aspects of crypto in the coming years. 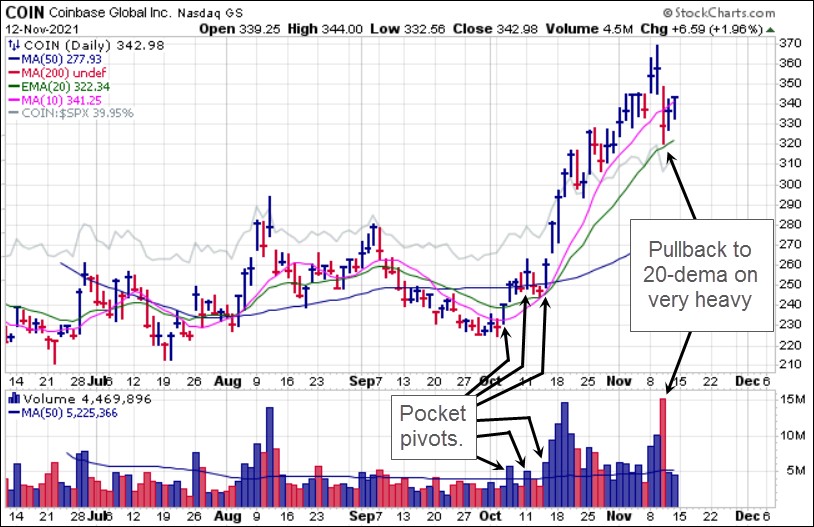 Microstrategy (MSTR) is another crypto-related stock that has tended to correlate closely to price movements in Bitcoin given that it has essentially abandoned is software business and staked its future price performance on what happens to its large Bitcoin holdings. Thus MSTR is simply a proxy for the price of Bitcoin. Recently the stock broke out of a 12-week base on a strong volume and is now pulling in to test the top of that base. This puts it back within buying range of the original base breakout through the $775 price level, using the 20-day exponential moving average as a reasonable selling guide. Keep in mind that as Bitcoin itself tests the 20-dema, the moving average serves as near-term support for both $BTCUSD and MSTR. 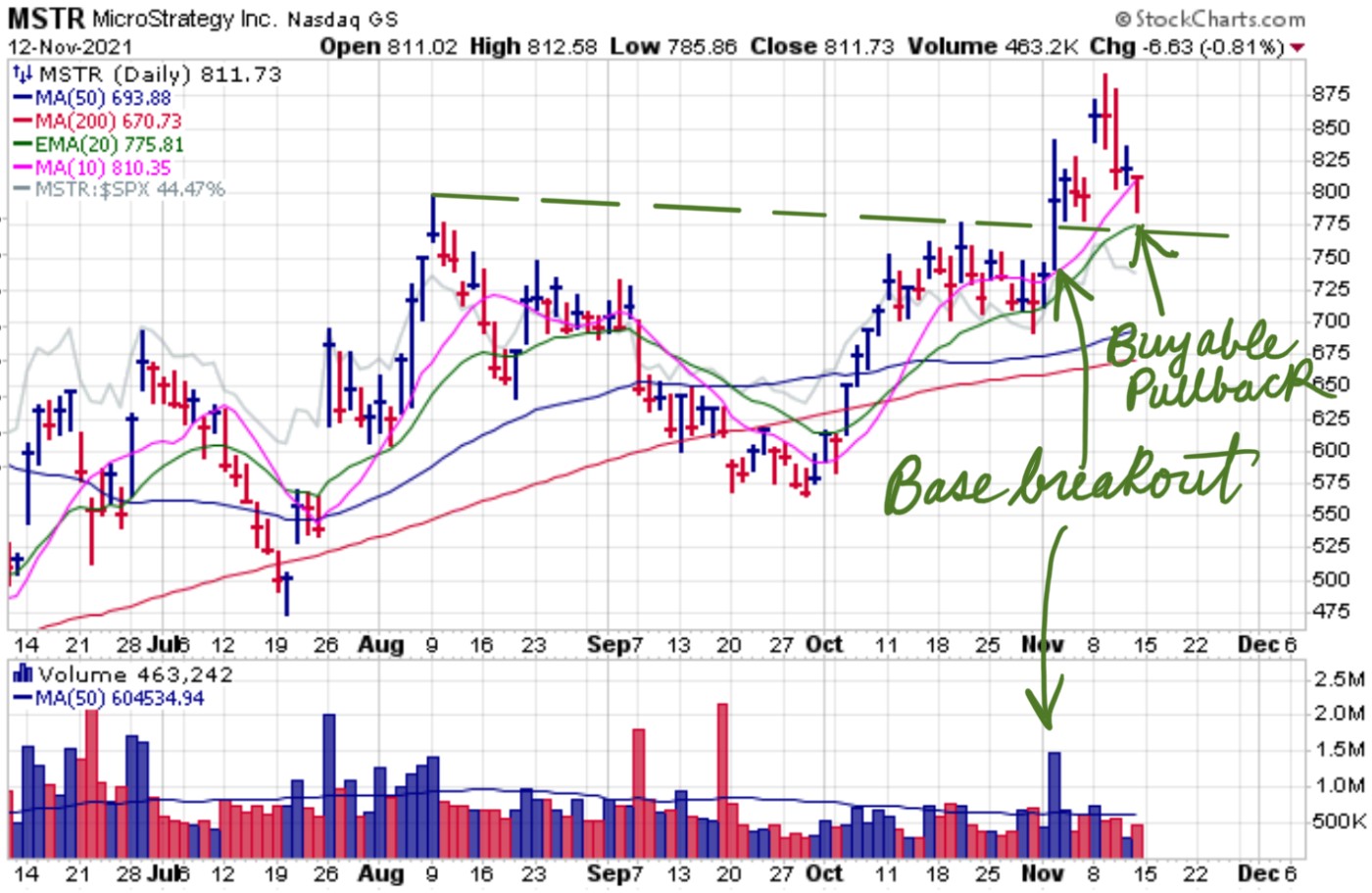 Wednesday’s IPO of Rivian Automotive (RIVN), an electric-vehicle maker owned by Amazon (AMZN) put the spotlight on the EV space this week. While we do not advise buying IPOs until they have formed some sort of discernible base or concrete long entry signal such as a pocket pivot or U&R, the stock has rallied for three days straight since opening up for trade on Wednesday. 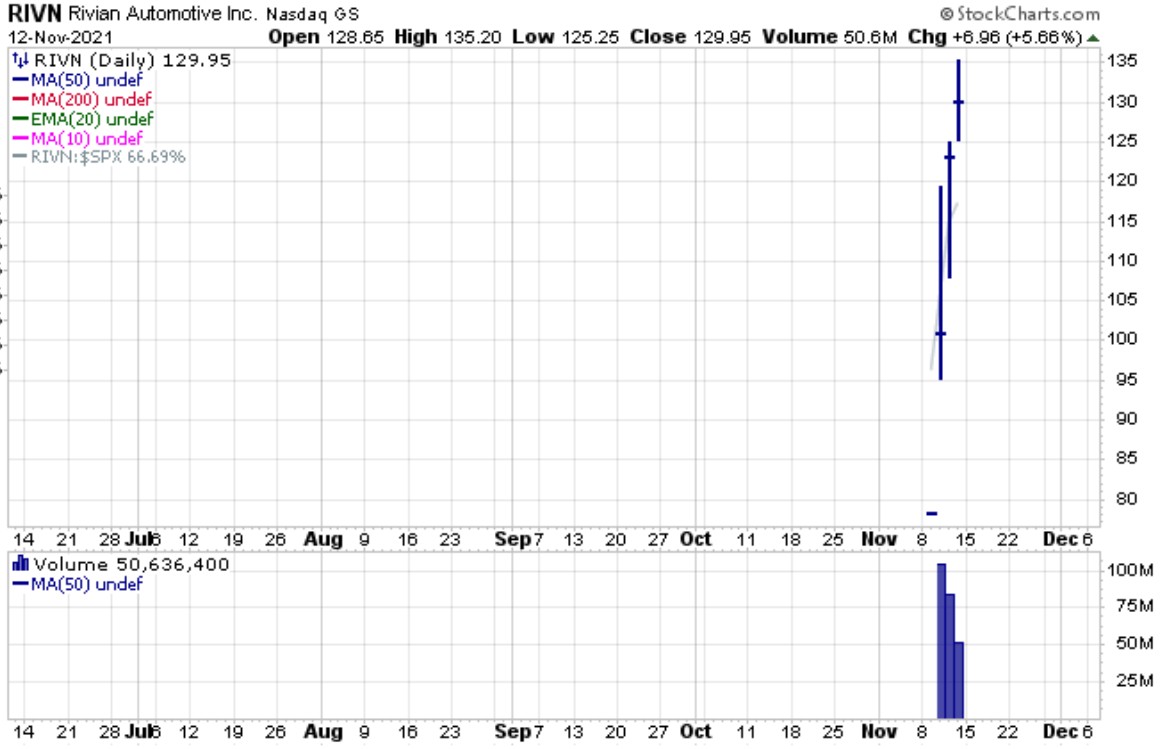 While there have been some sympathy to moves to RIVN among other EV makers and EV-related stocks, there has also been some volume buying in aluminum maker Alcoa (AA) and copper producer Freeport McMoRan (FCX). Aluminum and copper are necessary for the production of EV vehicles and batteries. Both stocks posted pocket pivots on Thursday, and FCX’s move remains within buying range of a range breakout through the highs of the prior four-week price range. AA is extended from its pocket pivot but can be watched for buyable pullbacks closer to the 50-day moving using the 10-day moving average as a selling guide.

We recently reported on big-stock fertilizer name Nutrient (NTR) as a possible short-sale set-up along the underside of its 20-day exponential moving average following a massive-volume outside reversal to the downside after earnings two weeks ago. Historically, such massive selling would serve as a harbinger of further downside to come, but in the Age of QE stocks can absorb large amounts of selling and then hold their ground before making another run at their prior highs. This is not uncommon, and has been observed by Gil Morales among many stocks, giving rise to the tongue-in-cheek phrase, “Down on Big Volume = Buy Signal.” If one observes thousands of stock charts on a weekly basis one quickly realizes,  however, that this is not as tongue-in-cheek as one might think given that such price/volume action can often result in a resolution back to the upside. Thus, while the stock may indeed remain a short along the underside of the 20-dema in anticipation of a break lower, one must also be aware that a move back above the 20-dema could trigger a long entry if it happens. This is the essence of what Gil refers to as a “360-degree approach” in an often volatile and seemingly contradictory QE-influence market where big-volume weakness does not necessarily beget further downside any more than big-volume strength begets further upside. 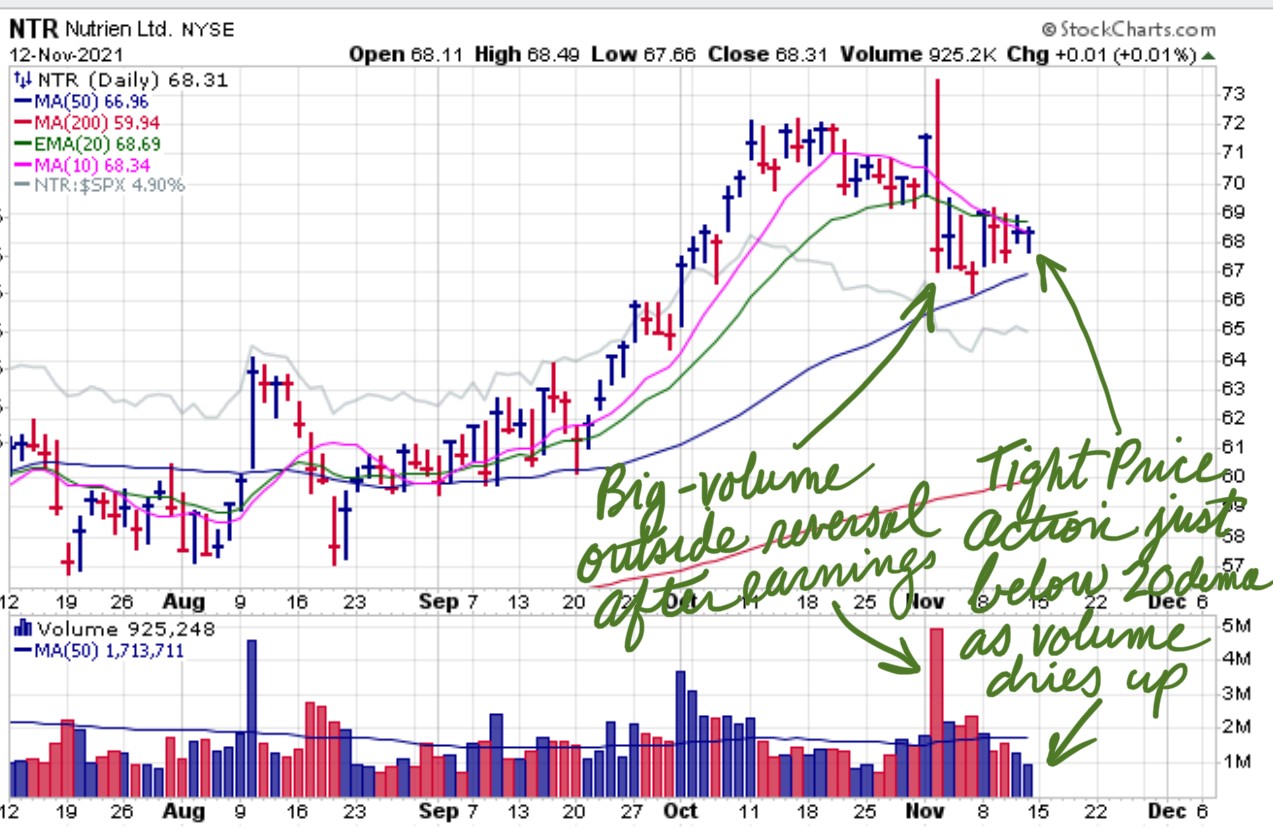