The VoSI Focus List is a compilation and reference list of stocks for which Pocket Pivot or Buyable Gap-Up Reports have been issued and which have been deemed suitable for inclusion on the Focus List. Not all stocks for which a Pocket Pivot or Buyable Gap-Up report has been issued will necessarily be added to the list. It is not intended as a "buy list" or a list of immediately actionable recommendations. Stocks on the list may or may not be in proper buy positions, and investors should exercise discretion and proper judgement in determining when and where stocks on the Focus List can be purchased. The following notes are intended to assist in this process. Please note that members can enlarge the Focus List image by clicking on the body of the email and then holding the Control Key while pressing the "+" key until it is large enough to read.
General Observations:
The NASDAQ Composite and S&P 500 Indexes continue to track sideways as they remain near their all-time highs. The Dow Index posted a new all-time high earlier in the week. The NASDAQ has now racked up four distribution days along the highs over the past two weeks but remains well above critical support at the 50-day moving average. 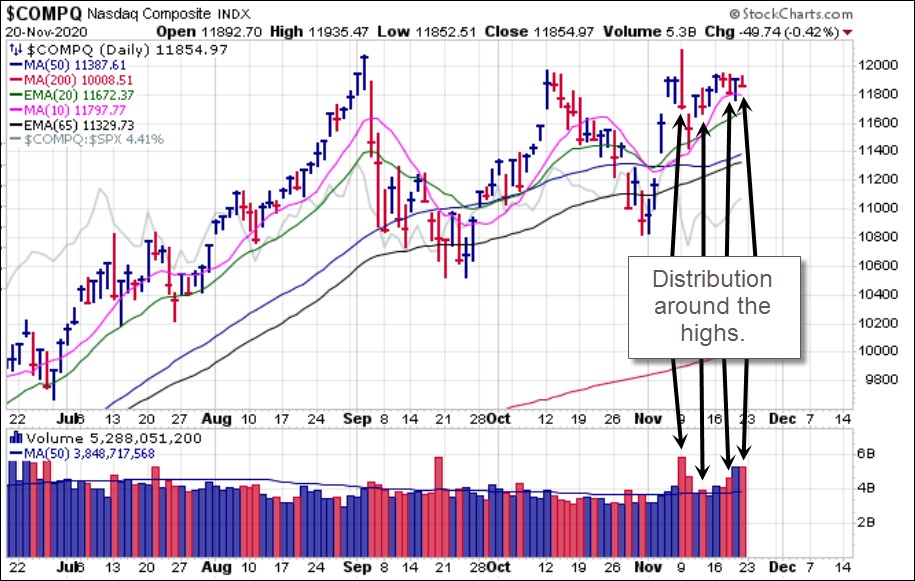 Meanwhile, bullish sentiment abounds as the American Institute of Individual Investors' (AAII) Bullish/Bearish sentiment indicators reach historical highs, and total short interest as a percentage of total market cap on the S&P 500 has reached its lowest  levels since 2004 at 1.8%. Remember that these are secondary indicators and therefore one should focus on the set-ups in individual stocks instead.

Notable Action:
The big story this week has been the continuing march of Bitcoin as it cleared the $18,000 level and moves ever close to all-time highs. The Grayscale Bitcoin Trust (GBTC) has now doubled since early October when it posted a U&R long entry at the 200-dma back in early October. As it approaches all-time highs we are alert to any near-term topping signals as the move becomes very frothy. 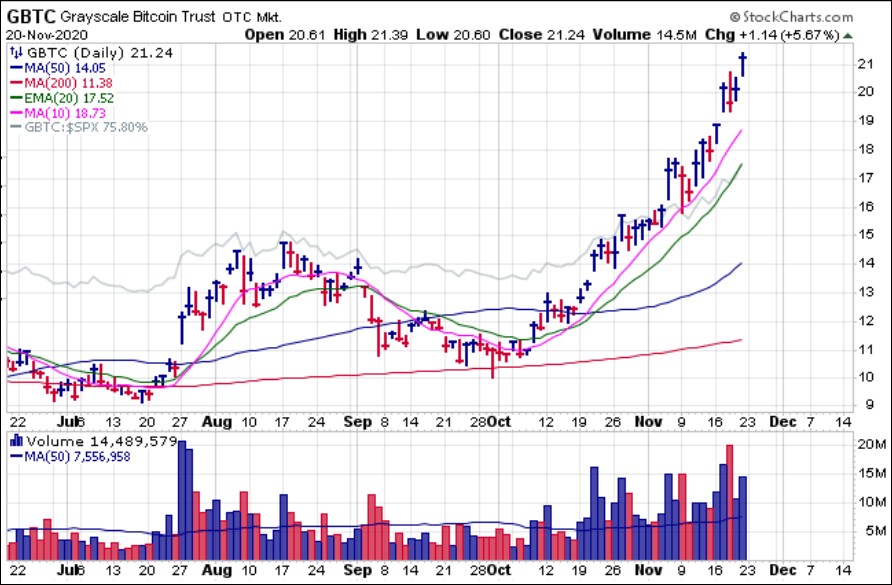 Microstrategy (MSTR) has continued to push higher as well, after the company announced another purchase of Bitcoin, making its current total $525 million. The stock is way extended at this point, but in our Friday live webinar we discussed other similar Bitcoin-ownership themed names like Square (SQ) and PayPal (PYPL). We also discussed the idea that we could see other cash-laden companies move to acquire Bitcoin as a hedge against a fiat dollar, and one such cash-laden company would be Apple (AAPL). Certainly, if AAPL announced that it had purchased a large amount of Bitcoin this would have bullish implications for Bitcoin, but also for AAPL stock itself. The tens of trillions of dollars on the sidelines held by major corporations is food for thought as the Bitcoin phenomenon broadens again. 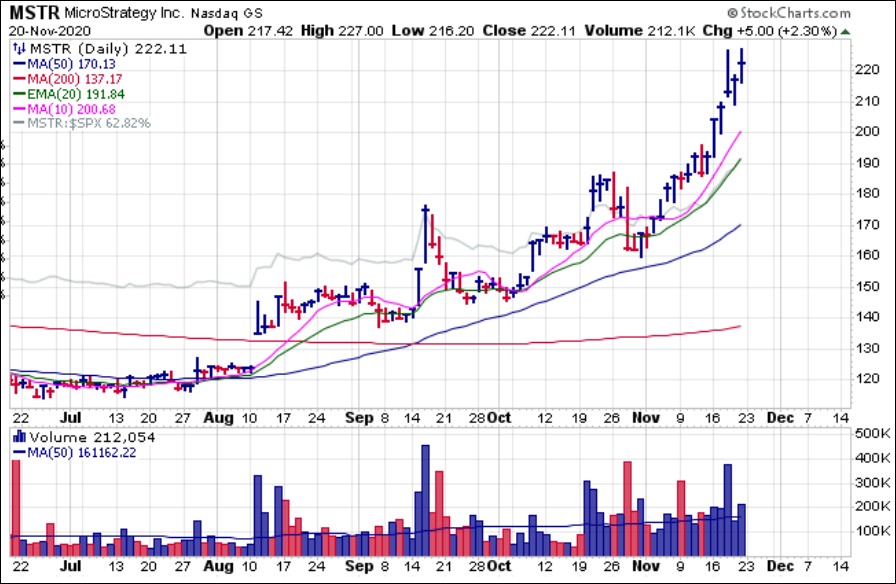 Precious metals have lagged but remain in consolidations following their sharp run-ups in late July to early August. While there have been several false starts, the bottom line for the metals may be the lack of a new stimulus bill from Congress. The Fed has pushed for this and needs the government to issue more Treasury debt which is the product it needs to purchase in order to inject additional QE into the system. Until a resolution to this is forthcoming, the metals may remain in choppy consolidations. In the meantime, we are happy to play Bitcoin via the GBTC.

The electric-vehicle space remains strong, and Tesla's (TSLA) addition to the S&P 500 Index, which was announced on Monday, added fuel to that fire as the stock broke out of a tightening flag formation. As we indicated in last weekend's Focus List Review, the stock was buyable on the basis of its voodoo pullback to the 65-day exponential moving average two Fridays ago. 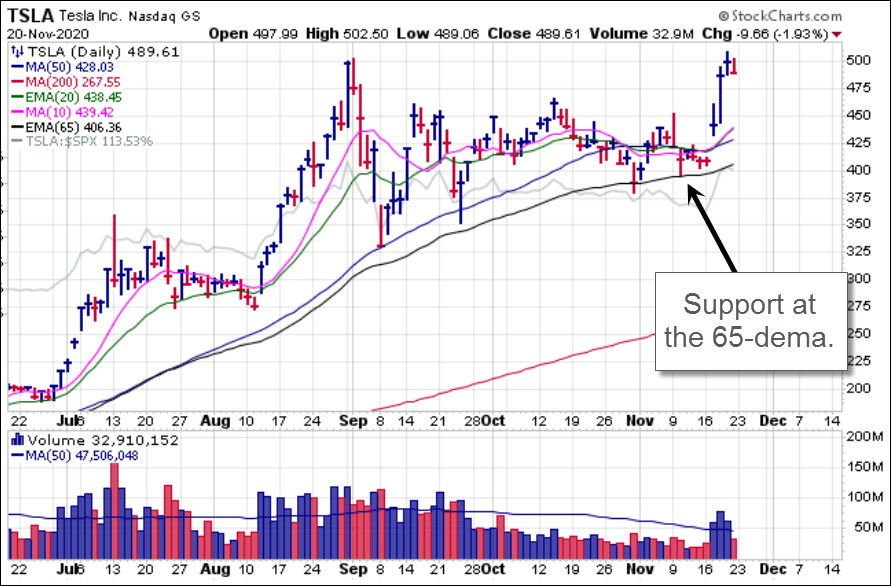 Chinese EV leader Nio (NIO) continues to consolidate its prior upside move after reporting earnings last week. However, the action over the past week has the look of a near-term climactic top, which may lead to at least longer period of consolidation from here. Because NIO has obeyed the 10-day moving average since late September, more than seven weeks, the Seven Week Rule would indicate using the 10-day line as a selling guide at this stage of the run. 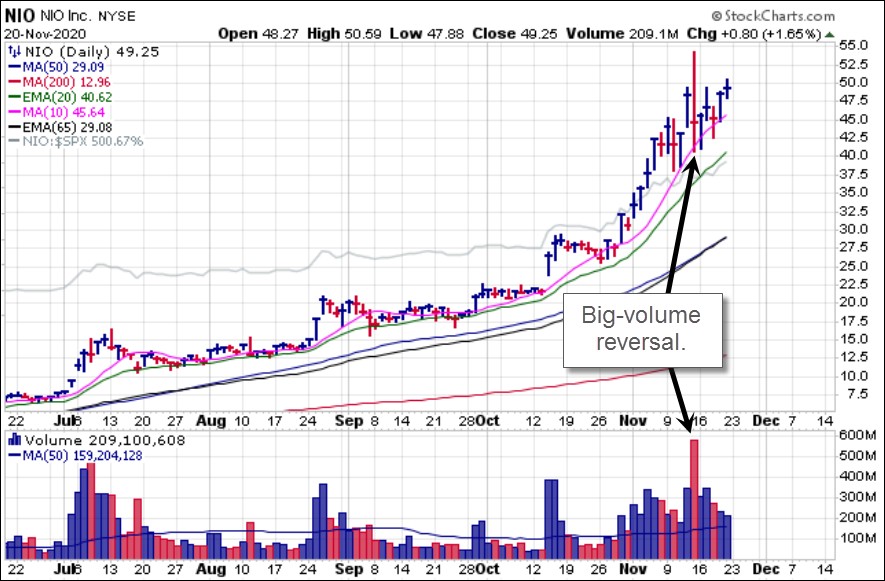