The Dow Jones Industrials Index continues to outperform, clearing its mid-August bear market rally peak on Friday during a truncated post-Thanksgiving trading session. The indexes continue to trade higher on the basis of Fed pivot hopes, sending money piling into Dow 30 stocks. The Dow is now in a potential double-top position as it just clear the August high on weak holiday volume. We must admit that there is an Orwellian tinge to the premise that the Fed is now turning dovish while it is still expected to raise rates 50 basis points, still a sizable rate hike, in December instead of the prior 75, with the expectation that a final flurry of 25 basis point rate hikes will get it to an alleged terminal Fed Funds rate of 5-7% in an orderly manner. 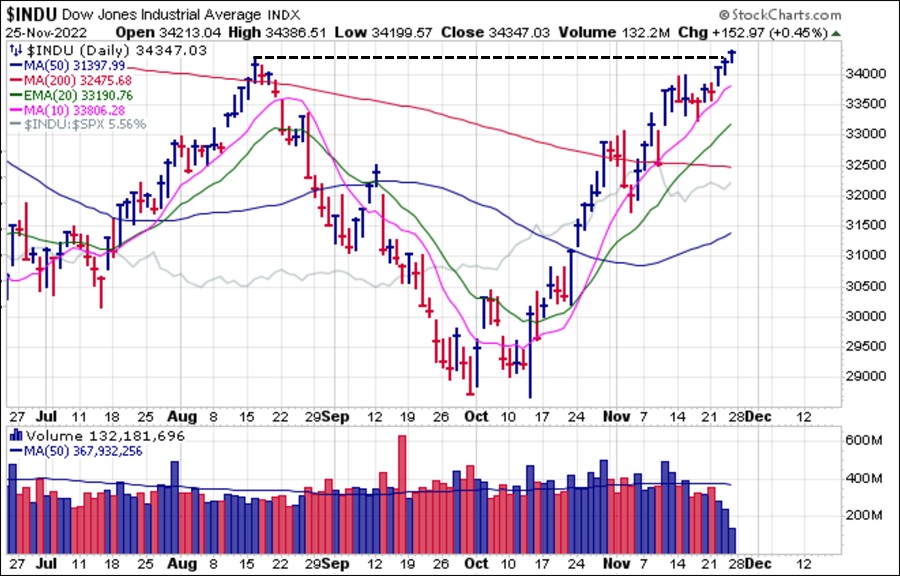 Meanwhile the NASDAQ Composite lags as money rotates into the Dow. While the Dow is clearly trending strongly off the October lows, the NASDAQ has the appearance of forming a two-month bear flag. Bear market rallies can often be of significant magnitude, and the current divergence between the Dow and the NASDAQ appears argue for a bear market rally rather than a glorious new bull market phase based on the idea that Fed interest rate increases will soon be halted or declining. We have never seen a new bull market begin while the Fed is still raising rates, and in fact prior bear markets have continued lower even after the Fed began to pivot in fact by lowering rates as shown in 2000-02 and 1930-32. Further, new bull markets do not begin when the DJIA is showing strength vs. risk-on indices such as the NASDAQ Composite or Russell 2000. 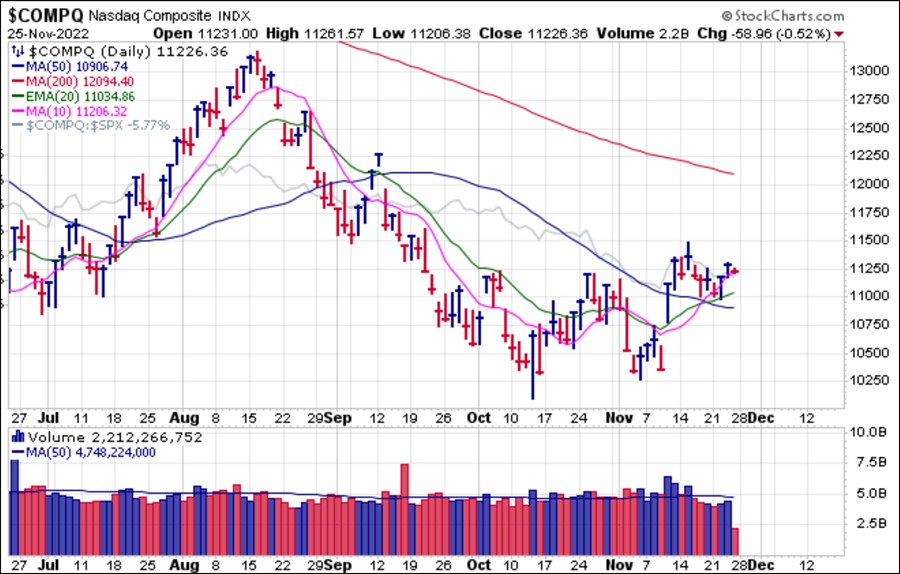 Gold and silver continue to consolidate prior gains that began with the release of the Consumer Price Index three weeks ago which in turn sparked the current Dow rally as the idea of “peak inflation” and a Fed that will soon shift course took hold. If this Fed pivot rally is for real, then we would expect precious metals to continue rallying following forceful moves off the October lows. We would view pullbacks to the green 20-day exponential moving average in the Sprott Physical Gold Trust (PHYS) or the Sprott Physical Silver Trust (PSLV) as the best option for buyable pullbacks at these levels.

When considering whether the current Fed pivot is credible or not, we must be aware that it is likely the market will figure out when the Fed is likely to reverse currently hawkish interest rate policy. In the same manner that the market began raising rates long before the Fed figured out it needed to be raising the Fed Funds rate, the market could make a similar determination with respect to a future Fed pivot. The decline in interest rates and the U.S. dollar over the past three weeks is consistent with a Fed pivot type of scenario, but it is not clear whether this is just a short-term head fake within a continuing bear market.
Should the Fed pivot theme continue to play out, then we would watch for commodity-related areas of the market to perform well. Back on October 21st we sent out Pocket Pivot reports on big-stock aluminum producer Alcoa (AA) and silver miner First Majestic Silver (AG). While AA had to endure a shakeout that caused the original pocket pivot to fail, AG has since held support at its 50-dma and moved higher as it now trades above and along the 40-week moving average on the weekly charts below. Note that AA and AG are both now forming tight two-week flag formations on the weekly charts, which is constructive weekly action that should be monitored.

The daily chart of First Majestic Silver (AG) reveals the reported pocket pivot on October 21st and a subsequent low-volume pullback that held support at the 50-dma. The next day, a light Consumer Price Index number came out, and AG was gapping back to the prior October highs. It is now sitting above the 200-dma and should be watched for constructive action along the 200-dma and the lower 20-dema, where it found support this past Tuesday. Like the PSLV, AG was buyable along the 20-dema earlier this week. 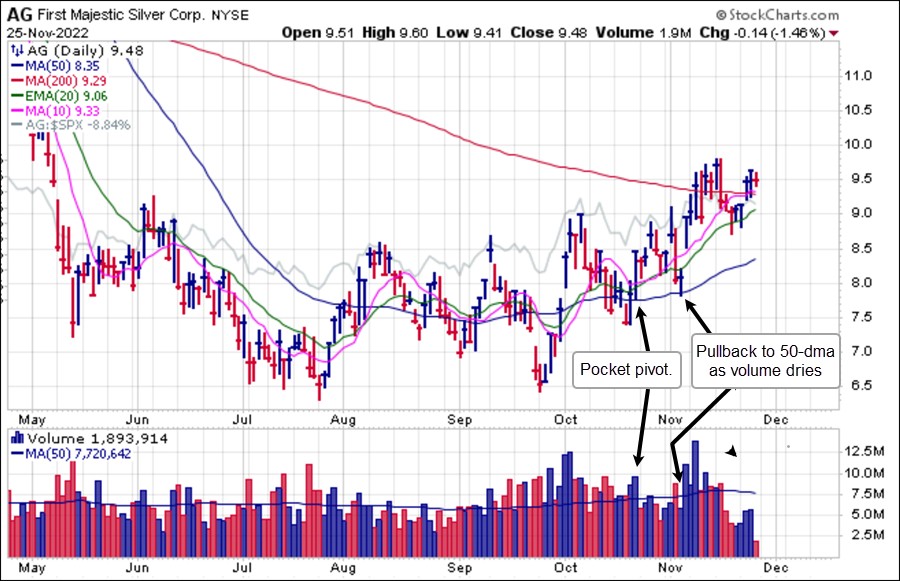 Other miners and precious metals related names are basing in similar fashion. We will continue to monitor the group, including gold miners AngloGold Ashanti (AU), Gold Fields (GFI), and Newmont Corp. (NEM) and gold production stream owner Osisko Gold Royalties (OR), all of which are currently showing very tight flag formations on their weekly charts following big upside moves in late October. 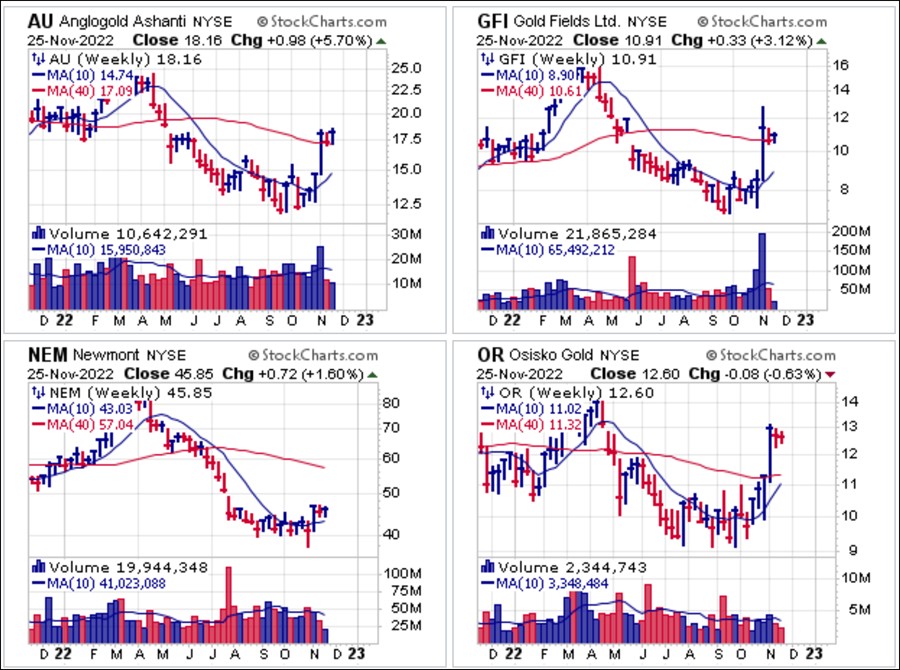 Overall, this remains a challenging environment, and we have yet to see much, if anything that we would characterize as having more intermediate- to longer-term trend potential.

The Market Direction Model (MDM) remains on a SELL signal for reasons cited in this piece.