The indexes have been slowly churning their way higher over the past several days. The NASDAQ Composite Index ran into higher-volume churning on Thursday and then low-volume churning and stalling on Friday. Note the similarities to the last sharp upside move back in July which also began with a sharp move to the upside which then lost some of its upside velocity as it continued to grind slowly to the upside and consecutive new high after new high. At that point a large outside reversal on heavy selling volume hit the index in the last week of July.

Currently the NASDAQ has a similar look, as the sharp rally in late September and early October has lost its upside velocity, but the index has continued to grind its way to several new highs over the past seven trading days. The index does look vulnerable to at least a pullback, although it may not necessarily resolve the same way it did in July. We might also expect that a market pullback would likely be associated with some sort of news catalyst. as was the case in late July. Sometimes, however, the price/volume action turns out to be a predictor of such events as the mass market mind discounts the future. 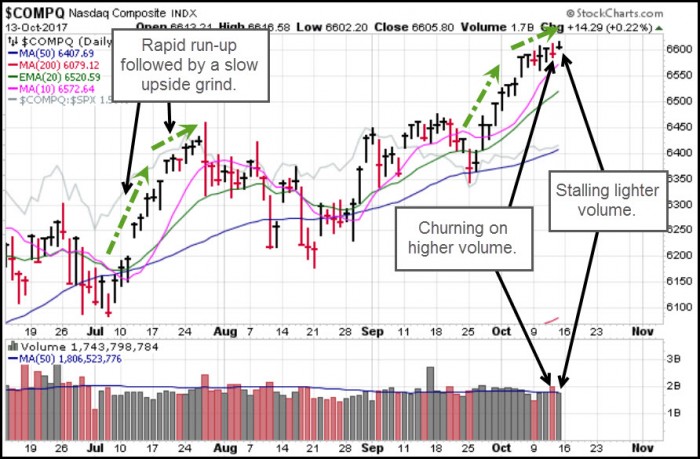 The small-cap Russell 2000 Index, as represented by the daily chart of the iShares Russell 2000 ETF (IWM), which has been on fire since the latter part of August, has spent the better part of the past two weeks consolidating the prior sharp run-up. Note how that run-up showed some signs of near-term climactic action with the long upside price bars near the end of the sharp upside move. This climactic action is not to be confused with a "climax top," which relates to individual stocks. It provides some logic to the current sideways consolidation. A orderly, lower-volume retracement down as far as the 20-dema would be normal, but after such a strong upside move one must be alert to more concerted profit-taking. 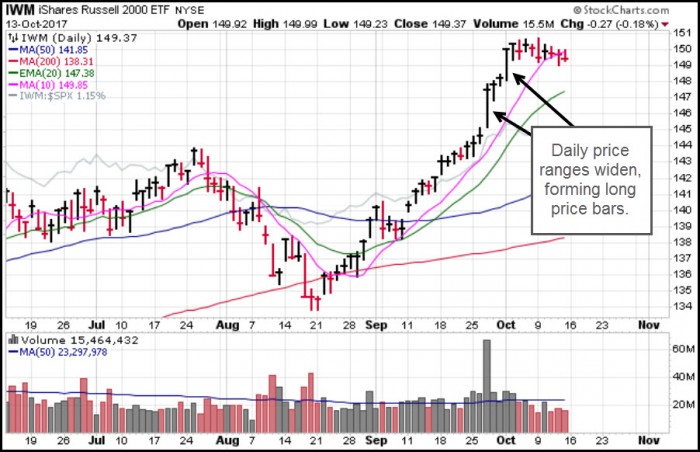 As we move into the heart of earnings season over the next 2-3 weeks, we do not advise that members start taking fresh positions into an earnings report with the idea of playing "earnings roulette." If one has a reasonable profit cushion in a stock about to report earnings, then one can afford to play earnings roulette with "house money." Otherwise, taking a fresh position without any profit cushion exposes one to unmanageable risk, despite the fact that it is also always possible that the right number will come up on the roulette wheel and a stock will gap to the upside. This is one reason we have refrained from adding new names to the list ahead of earnings.

Notable Action:
Alibaba (BABA) is taking some higher, but mostly about average or less, selling volume as it now tests its 20-dema. We would look for volume settle down here if the stock is to hold support at the 20-dema. If this occurs, then the stock can be considered to be in a relatively lower-risk entry position. Notice that the recent move to new highs was accompanied by light volume, and that since late August the stock has seen many more red selling volume bars relative to blue buying volume bars. Earnings are expected in early November, so the stock may bide its time until then. Maximum support remains the 50-dma. 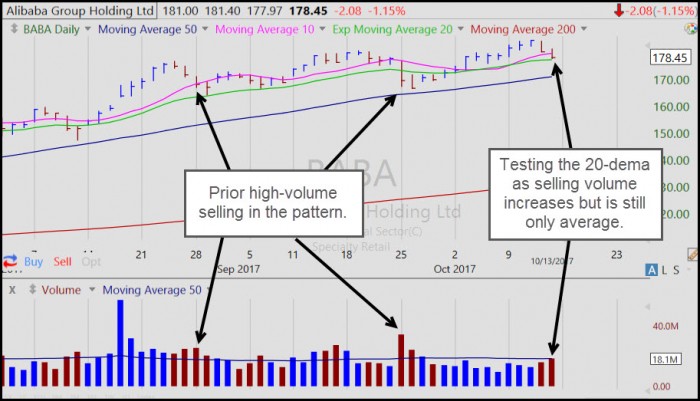 FireEye (FEYE) failed to hold support at its 10-dma and broke below the line on Thursday on higher volume. It then reversed at the 10-dma on Friday as volume came in very light, reflecting a lack of buying interest. It is now testing the 20-dema, and we would like to see volume dry up as the stock holds the line as constructive action that would help to bring the stock into a potentially lower-risk entry position. 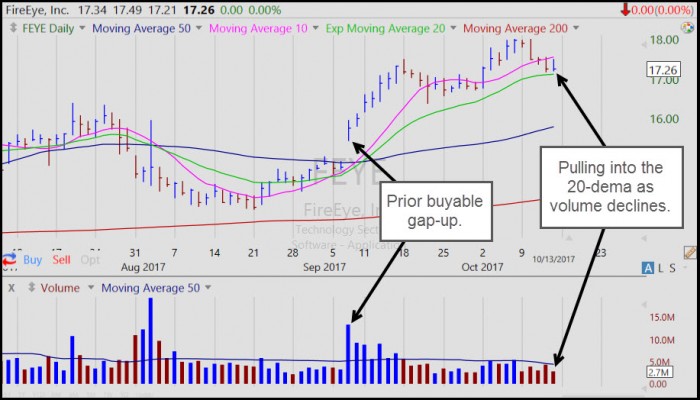 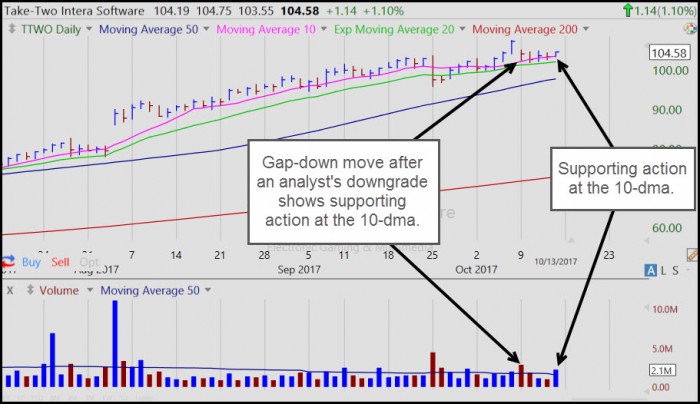 Netflix (NFLX) is expected to report earnings on Monday after the close. The stock has acted well since breaking out last week, but we would not advise taking positions ahead of earnings.

Weight Watchers International (WTW) has dipped just below its 50-dma with volume picking up every so slightly, but still well below-average. WTW has had similar small moves below he 50-dma over the past month or so, and each time has been able to regain the 50-dma. Earnings are expected on November 2, so buying the stock here on any move back above the 50-dma would imply that one is looking for a sharp move to the upside ahead of earnings. 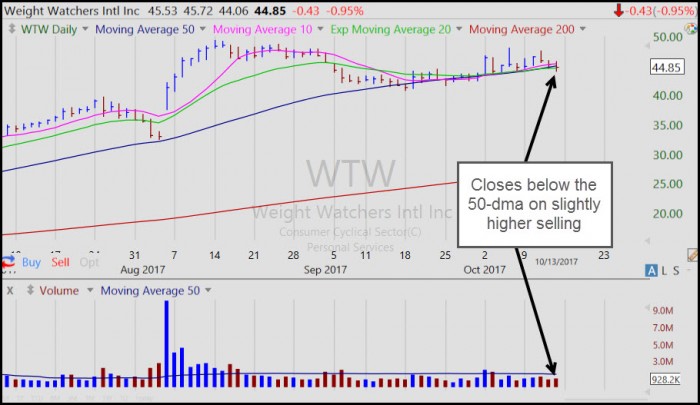