The S&P 500 Index has now rallied through its 50-day moving average as intraday volatility reaches a pitch fever. Earlier in the week tech was taking a lot of heat after Alphabet (GOOG), Microsoft (MSFT), and Meta Platforms (META) reported weak earnings as money rotated into other areas of the market. By the end of the week money was piling back into tech after weak Amazon.com (AMZN) earnings but a benign Apple (AAPL) report that saw record revenues for the company. The rally that began on October 13th continues. 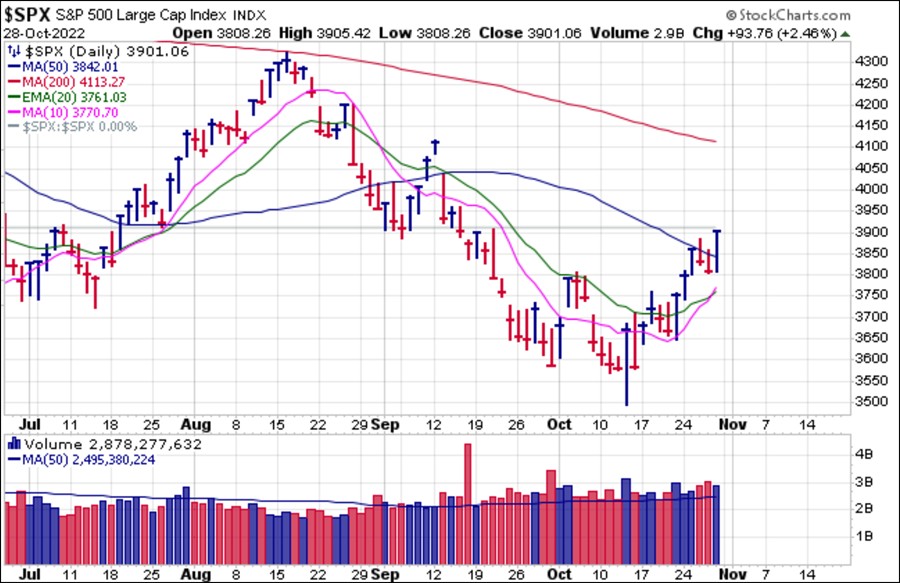 While big-cap techs have taken a lot of heat lately, big-cap Dow names have led the market since the October 13th lows. The Dow Jones Industrials Index blew through its 50-day moving average the prior week and on Friday pushed through the higher 200-day moving average. The chart below aggregates the volume for all 30 Dow names rather than showing NYSE volume, so gives a good idea of how powerful Friday's move was for Dow stocks. 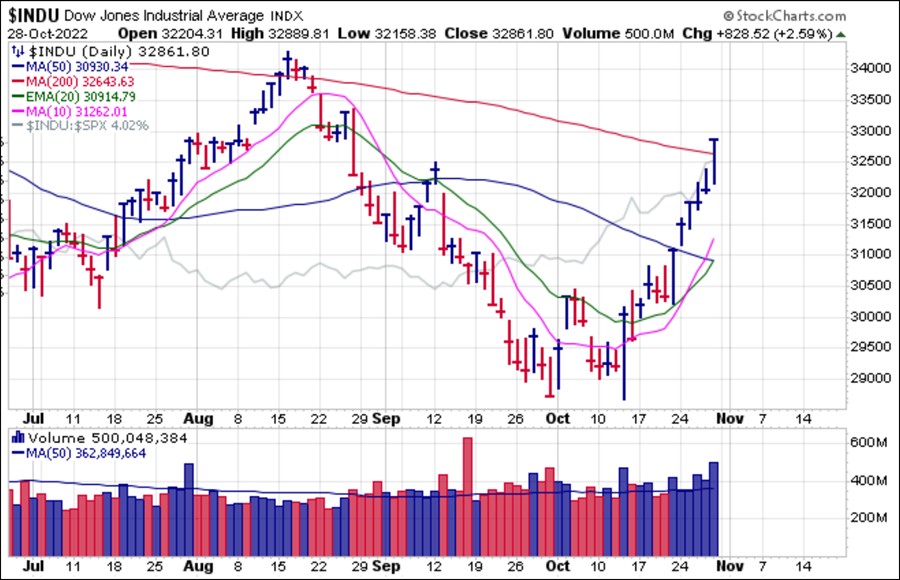 Apple (AAPL) and Intel (INTC), both of which are now Dow Index components, posted the strongest percentage gains among Dow stocks on Friday. Both companies reported earnings after-hours on Thursday and both stocks posted pocket pivot moves through their 50-day moving averages from positions where they were already edging up off the mid-October lows. AAPL also ran up into 200-day moving average resistance, so while Friday's move was strong, it must eventually clear the 200-dma if the current move is to have legs. If INTC's moves is valid, then we would expect it to attempt to hold support along or at the 50-dma.

Meanwhile, big-cap techs Amazon.com (AMZN), Alphabet (GOOG), Meta Platforms (META), and Microsoft (MSFT) all gapped down after reporting earnings this past week. While they all rallied off their lows in sympathy with AAPL and INTC amid the strong Friday rally, they remain near 52-week lows and in extended downtrends. 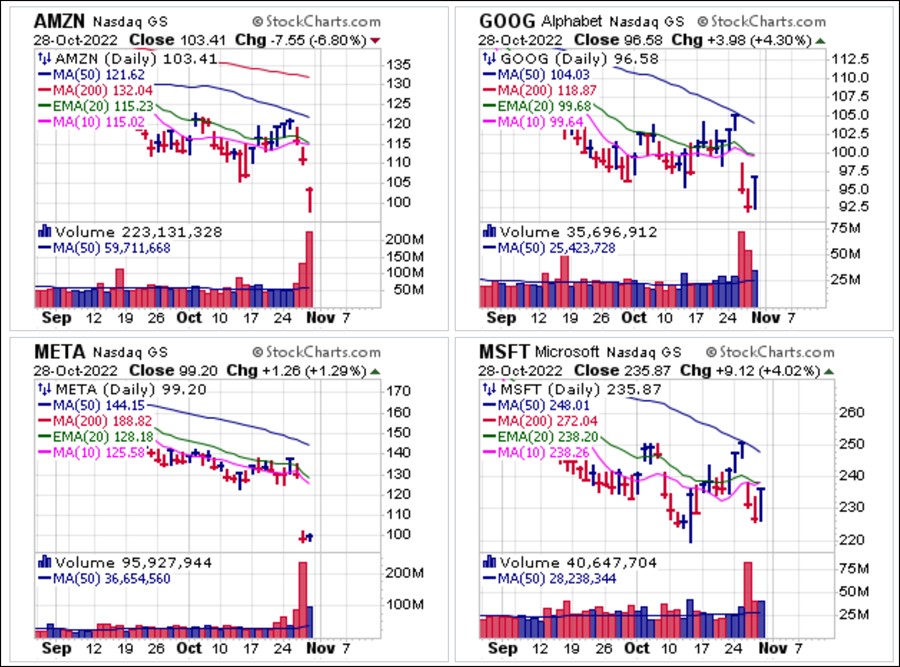 Silver miner First Majestic (AG) is expected to report earnings this Thursday. The stock pulled in on Friday after an extended move off the lows of the prior week and found support at the confluence of its 10-dma and 20-dema. Silver, as represented by the Sprott Physical Silver Trust (PSLV) also pulled back after rallying seven out of eight days in a row off the lows of two weeks ago and on Friday found support along its 50-dma.

On a market rally as strong as we saw on Friday, we would have expected to see interest rates and the dollar falling sharply while commodity prices rose. That did not occur as the 10-Year Treasury Yield closed the week at 4.01%, the dollar held steady, and commodity prices fell, including aluminum prices. This caused the pocket pivot we saw last week in Alcoa (AA) to fail on Friday as the stock broke below its 10-dma and 20-dema which served as tight selling guides. Note, however, that price support in the $38 price area held on Friday, so it is possible that if the current market rally continues to blossom and develop, we could eventually see interest rates and the dollar fall sharply, driving commodities and commodity-related stocks higher, so we believe this is something to monitor. 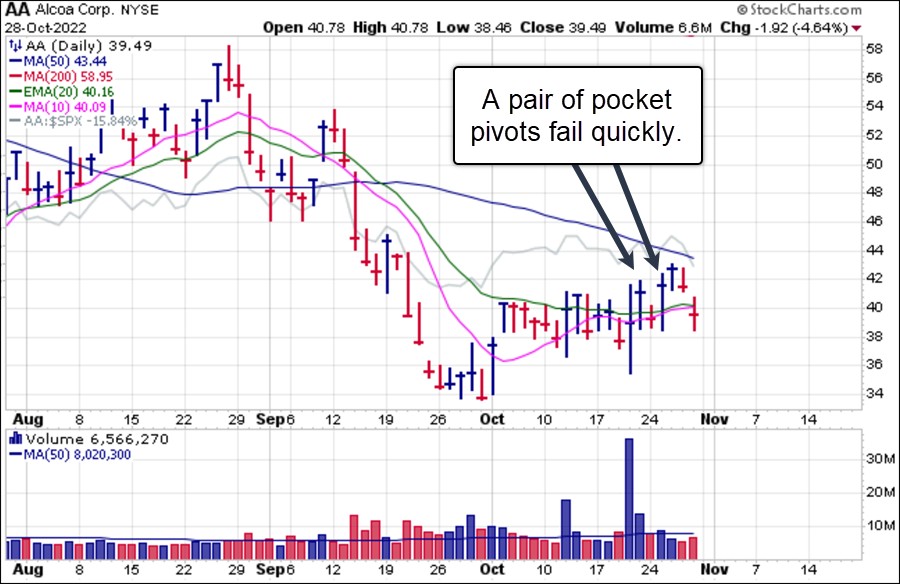 We reported on uranium producer Cameco (CCJ) on Thursday after the company reported earnings. This was a fluid situation since the stock gapped up from an extended position and then reversed, playing out as a shortable gap-up. At the time the report was sent out CCJ was attempting to hold support along the 200-dma but eventually failed, triggering two more short-sale entries along the 200-dma and 20-dema before finding support along the 10-day line on Friday. This is logical given how extended the stock was coming into Thursday's earnings report, so the pullback over the past two trading days may help to correct the wedging rally CCJ exhibited as it rallied ahead of its earnings report. As we believe nuclear power is and will continue to gain prominence, CCJ is a name to watch. If it can correct the prior wedging rally with a pullback here that holds along the 10-dma, for example, it may set up again, and we will issue reports as appropriate. 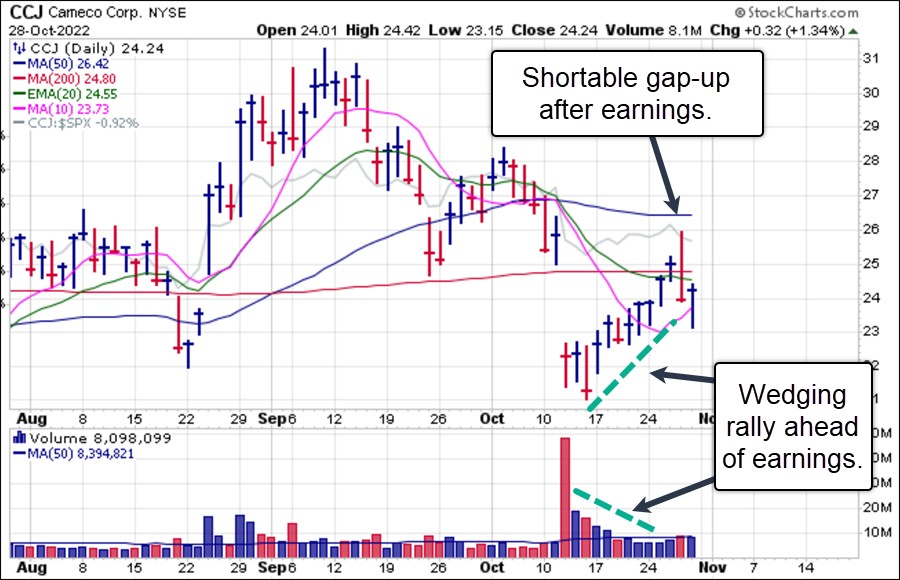 Other names that we initially reported on as short-sale targets in late September and early October, and which worked reasonably well have been rallying off the mid-October lows right along with the market. Lithium producer Albemarle (ALB) is expected to report earnings this week with energy drink maker Celsius Holdings (CELH) set to report the following week, therefore we see nothing actionable ahead of earnings. First Solar (FSLR) reported earnings on Thursday afternoon and posted a stalling pocket pivot on Friday as volume ballooned. This may be actionable on the long side if the stock can hold 50-dma support. Otherwise, any break back below the line would trigger a short-sale entry using the 50-day line as a covering guide. 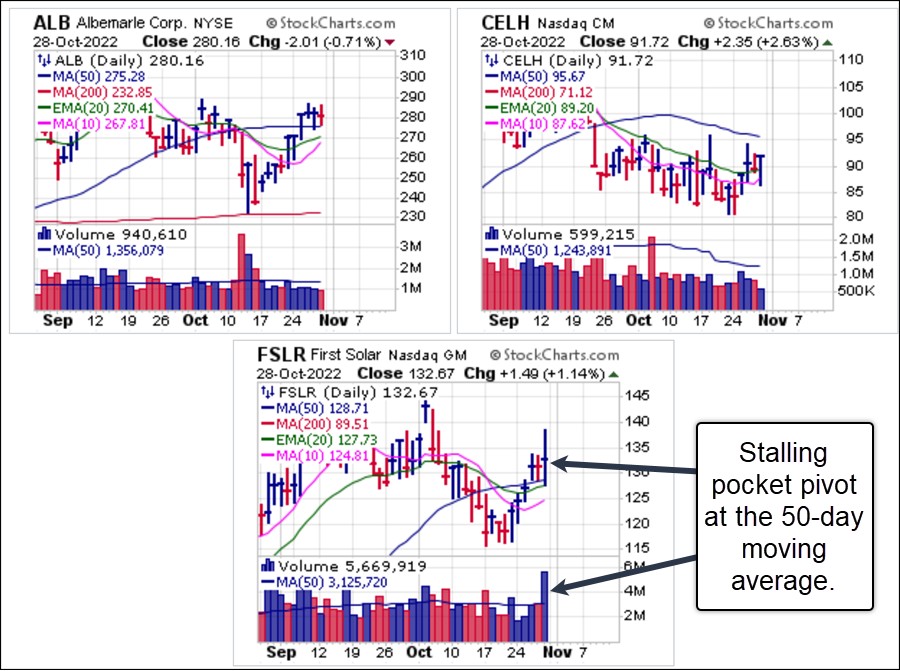 The major market-moving event of the week will, of course, be this Wednesday's Fed policy announcement. While it is expected that the Fed will raise interest rates another 75-basis points, their forward-looking commentary will be closely watched. If it indicates a slowing of interest rate increases, the market could interpret this as a sign that a Fed pivot towards a more neutral or even accommodative stance is likely to occur sooner or later, keeping the current rally alive.
That said, dead bat bounces are standard during bear markets. We have seen significant bounces that eventually rolled back over during major bear markets such as in 2008, 2000-02, and 1930-32. The current bounce rests on the hope that the Fed will "only" have to hike by 50 bps instead of 75 bps in December. Other central banks such as the European Central Bank indicated a more dovish tone going forward as they plan to slow the pace of rate hikes. The Bank of England is expected to make a similar announcement when they meet Nov 3. Nevertheless, the hikes across all central banks have been and will continue to be historically huge at least out to December. Then once the Fed halts or reduces rates, that is still no guarantee a bottom will have been reached if 1930-32 and 2000-2002 are any guides. The massive COVID-induced bubble still needs to be unwound.

The Market Direction Model (MDM) remains on a SELL signal.