The VoSI Focus List is a compilation and reference list of stocks for which Pocket Pivot or Buyable Gap-Up Reports have been issued and which have been deemed suitable for inclusion on the Focus List. Not all stocks for which a Pocket Pivot or Buyable Gap-Up report has been issued will necessarily be added to the list. It is not intended as a "buy list" or a list of immediately actionable recommendations. Stocks on the list may or may not be in proper buy positions, and investors should exercise discretion and proper judgement in determining when and where stocks on the Focus List can be purchased. The following notes are intended to assist in this process. Please note that members can enlarge the Focus List image by clicking on the body of the email and then holding the Control Key while pressing the "+" key until it is large enough to read.
General Observations:
Last weekend we reiterated our view that "we are somewhat cautious given that many new "set-ups" are occurring at later stages in the patterns, and would like to see more fresher first-stage set-ups appear." This caution has been validated by the market action over this past week. Stocks for which we have previously issued Pocket Pivot or Buyable Gap-Up reports over the past few weeks were struggling to make significant upside progress, which we have noted in previous Focus List Reviews.

This past week, many of these names have come undone, with names like GOOS, LGND, NFLX, NVDA, PLNT, TTD, TWLO, VEEV and others breaking down on heavy selling volume. This is no surprise, since these names were all in later-stage positions in their chart patterns, a primary reason why we have remained skeptical of more recent pocket pivots and buyable gap-ups in this market.

The action of individual stocks across the board shows up in the indexes as a sharp two-day price break on Thursday and Friday that took the NASDAQ Composite Index below its 50-dma. The index then proceeded lower on Friday on lighter, but above-average volume, before undercutting a prior August low and rallying slightly off its intraday lows. 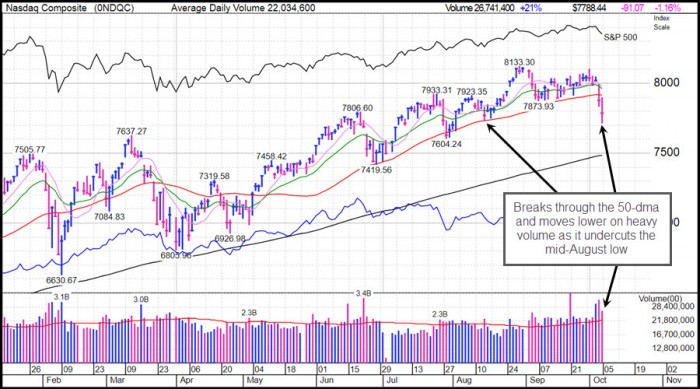 The S&P 500 Index has also broken hard to the downside over the past two trading days, with volume picking up on Friday as it held support at its 50-dma. 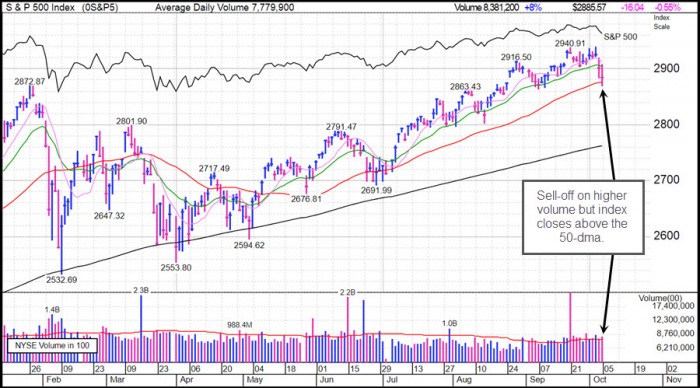 The small-cap Russell 2000 Index has continued to make lower lows in a divergent five-week downtrend. On Friday the index sold off on heavy volume but held support at its 200-dma while simultaneously undercutting and then rallying back above its late June low at 1630.06. The overall market action more than hints at the start of a possible sustained correction, and in most cases investors have likely been forced out of stocks and further into cash, based on any violations of established selling guides that occurred over this past week (see our notes further below). 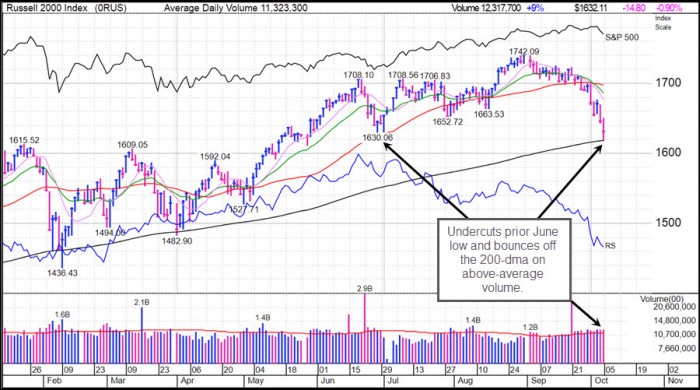 The Market Direction Model (MDM) switched to a sell signal on Thursday morning, five minutes after the opening bell.

Notable Action:
Amazon.com (AMZN) violated its 50-dma on Friday. The stock has seen a number of selling volume spikes over the past for the past five weeks, and two more were added on Thursday and Friday. This would serve as a selling guide for the stock based on the Seven-Week Rule. 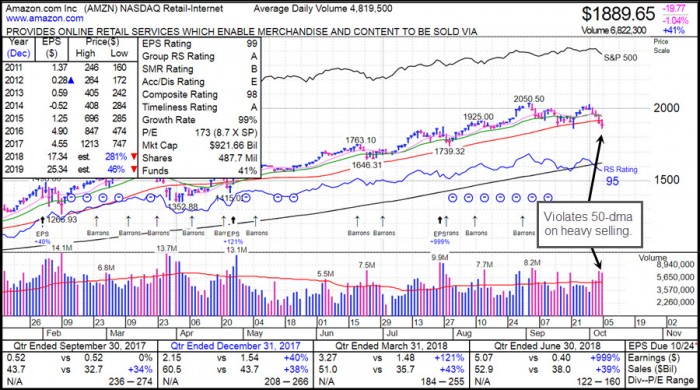 Fortinet (FTNT) had held above its 10-dma for more than seven weeks until Thursday when it breached the 10-dma and then broke below the 20-dema. This confirmed a 10-dma violation on heavy selling volume. According to the Seven-Week Rule a violation of the 10-dma would be a sell signal for the stock. 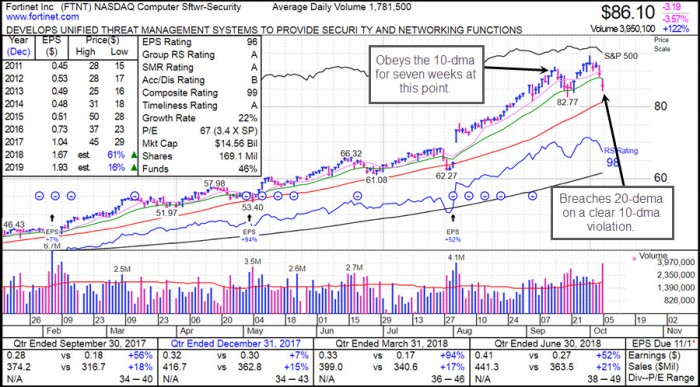 Square (SQ) has continued to run into resistance along the $100 Century Mark. It has since pulled back to the 20-dema with volume declining on Friday. We would watch for a breach of the 20-dema as a potential selling guide. Based on the Seven-Week Rule, the 50-dma would serve as a maximum selling guide since it has not obeyed the 10-dma for more than seven weeks. 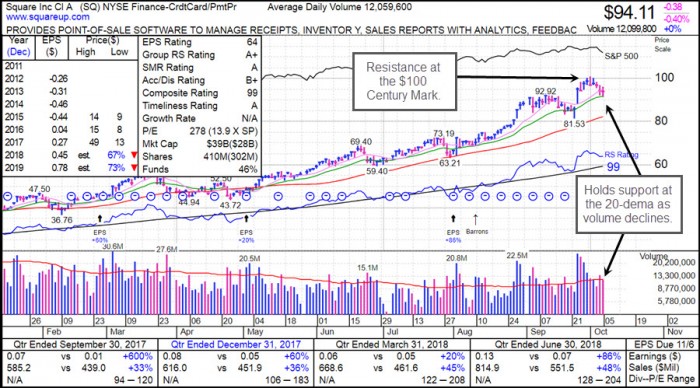