Major market indexes ended the week on a negative note as a higher-than-expected Producer Price Index revived inflation fears. After an initial gap-up open, allegedly on "news" of a phone conversation between U.S. President Biden and Chinese President Xi, the market reversed and extended its morning decline into the close with the NASDAQ Composite, Dow, and S&P 500 Indexes all closing near their intraday lows. The Dow has now violated its 50-day moving average while the S&P breaks below its 20-day exponential moving average and the NASDAQ is testing its own 20-dema. Furthermore, based on the underlying action of individual stocks, the market has taken on a more cautionary tone and we would remain alert to any potential, deeper correction. 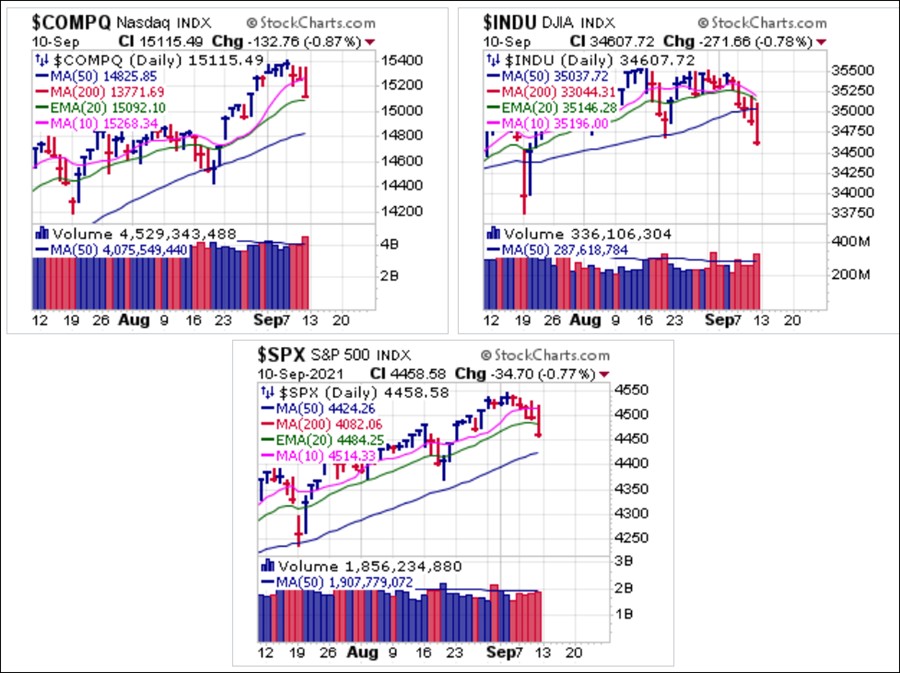 Earlier this past week and out of the blue, crypto-currencies of all stripes broke down sharply off recent highs in a "flash crash" as sellers swarmed out of the crypto space. Bitcoin is now trading back below its 200-day moving average but holding support at the 50-day line as of Saturday. This would be critical support for $BTCUSD and correspondingly to the Grayscale Bitcoin Trust (GBTC). 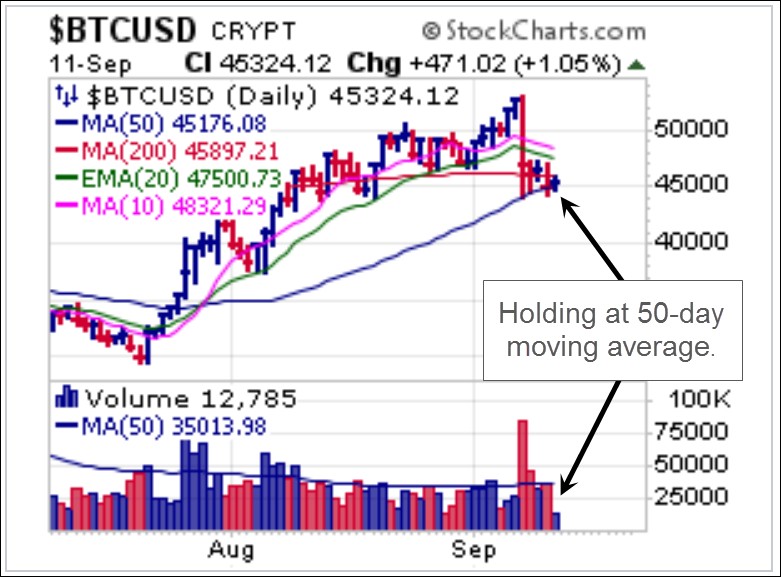 Ethereum is holding up relatively better in that it was already moving sharply higher after breaking out from a short base in late August and has now dropped back into the prior base and area of price congestion as $ETHUSD holds slightly above the 50-day line. 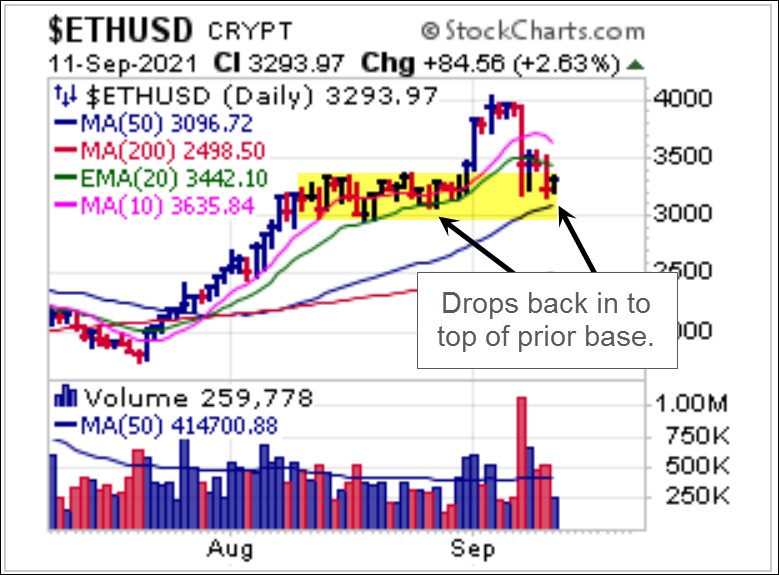 Cardano ($ADAUSD), which we have also discussed at length in our live webinars, is doing even better as it quickly regains its 20-day exponential moving average in a moving average undercut & rally (MAU&R) type of move on Saturday. Perhaps this is portending similar moves of $BTCUSD and $ETHUSD. The situation with crypto-currencies remains highly fluid, but at the time of this writing the entire space was holding up even after Russia announced it would not make $BTCUSD a legal tender currency. 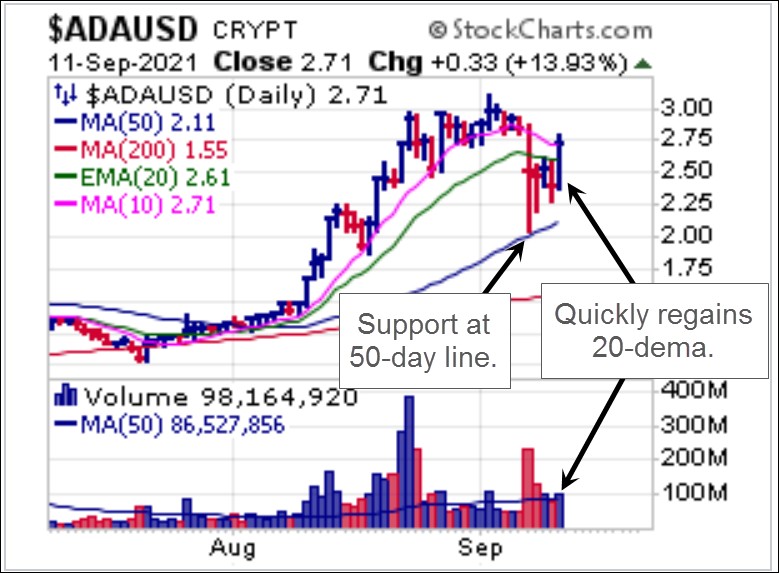 Apple (AAPL) was hit hard after a judge ruled that the company must stop prohibiting software developers from informing users of alternative payment methods outside their apps. While AAPL hailed the ruling as a victory, investors saw it differently, hammering the stock back below its 20-day exponential moving average on heavy selling volume in a clear breakout failure. The court ruled that Apple can’t keep blocking external payment options, so it may soon become much easier to spend cryptocurrency on iPhone and iPad devices. Epic Games had challenged Apple’s locked-down ecosystem in August 2020. It had enabled the ability to purchase in-game currency (V-Bucks) directly from Epic which violated Apple’s developer terms, thus was removed from the App Store. This is a major blow to Apple and its “walled garden” ecosystem strategy. 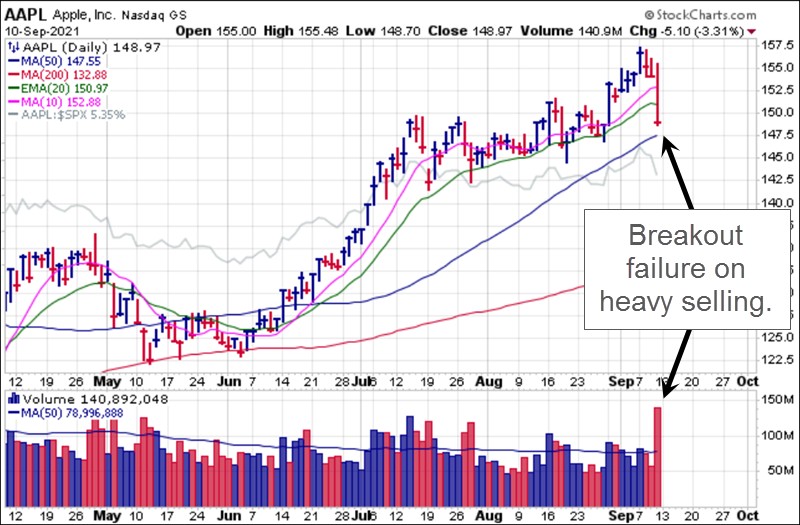 Alphabet (GOOG) and Microsoft (MSFT) sold off in sympathy. Both stocks closed below their 20-demas, which, along with AAPL, sets them up as potential short-sale targets if they cannot quickly regain their 20-day lines.

Currently we see no reason to be entertaining any further deployment into the long side of this market. If long anything, know where your selling guides are as the market action takes on a bearish tone, at least near-term.
This information is provided by MoKa Investors, LLC DBA Virtue of Selfish Investing (VoSI) is issued solely for informational purposes and does not constitute an offer to sell or a solicitation of an offer to buy securities. Information contained herein is based on sources which we believe to be reliable but is not guaranteed by us as being accurate and does not purport to be a complete statement or summary of available data. VoSI reports are intended to alert VoSI members to technical developments in certain securities that may or may not be actionable, only, and are not intended as recommendations. Past performance is not a guarantee, nor is it necessarily indicative, of future results. Opinions expressed herein are statements of our judgment as of the publication date and are subject to change without notice. Entities including but not limited to VoSI, its members, officers, directors, employees, customers, agents, and affiliates may have a position, long or short, in the securities referred to herein, and/or other related securities, and may increase or decrease such position or take a contra position. Additional information is available upon written request. This publication is for clients of Virtue of Selfish Investing. Reproduction without written permission is strictly prohibited and will be prosecuted to the full extent of the law. ©2023 MoKa Investors, LLC DBA Virtue of Selfish Investing. All rights reserved.
FOR OUR FREE MARKET LAB REPORT :