Major market indexes remain near all-time highs. Friday's Bureau of Labor Statistics monthly jobs report came in at 235,000 new jobs, far below estimates of 720,000-750,000. While this is certainly viewed as tapering back the Fed's thoughts about thinking about tapering, it also brings up an interesting alternative scenario - stagflation. A weakening economy combined with more than transitory inflation puts the Fed firmly between the proverbial rock and hard place.
It is not clear if they have a magical two-way tool in their handy-dandy toolbox, as Fed Chair Powell likes to refer to it, that can simultaneously address persistent, heightened inflation and a rapidly slowing economy. With interest rates already at zero, they are out of bullets with which to fight further economic malaise while the specter of negative interest rates bears the risk of further fueling inflationary forces. Tapering and/or raising interest rates to address persistent inflation would likely have negative economic consequences in a stagflationary environment. If history is any guide, the Fed is likely to choose the path of delayed tapering since the former has led to taper tantrums. When debt gets this excessive, central banks have always chosen the path of further fiat debasement. This can continue for longer than expected until the Era of QE collapses.
I have suggested this ushers in the Era of Crypto and the Era of The Metaverse which are interlinked. Past and present governments , ie, nation-states, presiding over their respective countries have sovereignty over a geographic area. The new eras  transform existing governments by bringing meta layers above physical borders as the age of nation-states is coming to an end. “Meat-space” is becoming less dominant.
In any event, the possibility of stagflation was likely what led to the muted market response on Friday, as such a weak jobs number might have carried with it expectations of a big upside market move. That did not occur. Nevertheless, the major market indexes remain in uptrends with the NASDAQ Composite Index posting an all-time closing high on Friday on a mild 0.21% upside price move.

This past Monday we reported on Ethereum ($ETHUSD) via the Grayscale Ethereum Trust (ETHE) as it posted a pocket pivot breakout off the 10-day moving average. 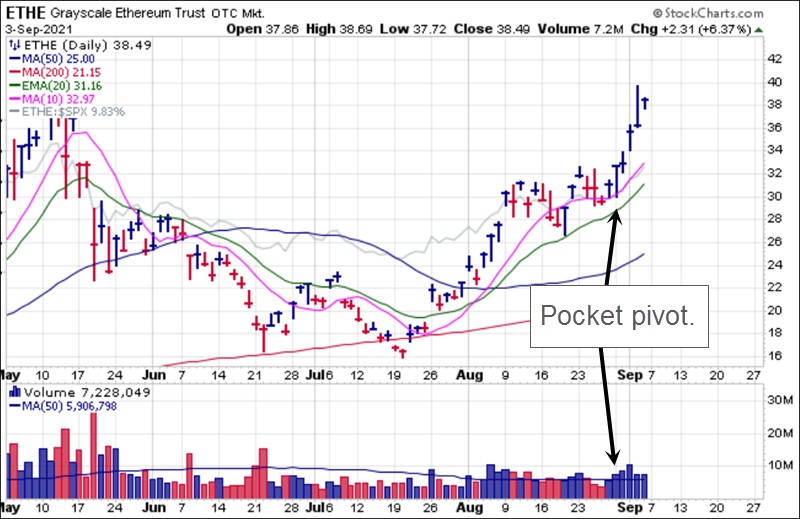 ETHE moved higher throughout the week and has now been joined in breakout territory by Bitcoin ($BTCUSD). Back on August 7th we reported on various pocket pivots and a buyable gap-up move in the Grayscale Bitcoin Trust (GBTC) as it cleared the 200-day moving average. It has held support along the 200-dma and on Friday posted its highest closing high since the lows of mid-July. 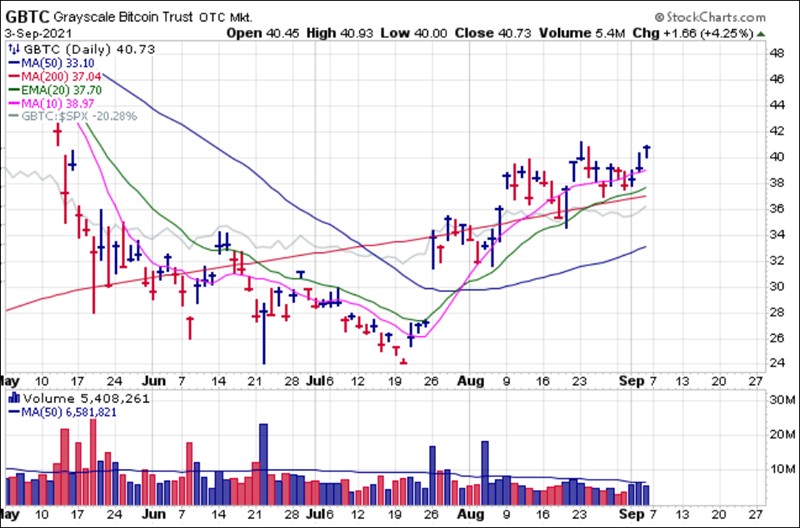 Alternative-currencies in general benefitted from the weak jobs number on Friday, with silver outperforming gold by a reasonable margin. This shows up as a bottom-fishing buyable gap-up (BFBGU) in the Sprott Physical Silver Trust (PSLV) where the intraday low of 8.52 can serve as a typical BGU selling guide. 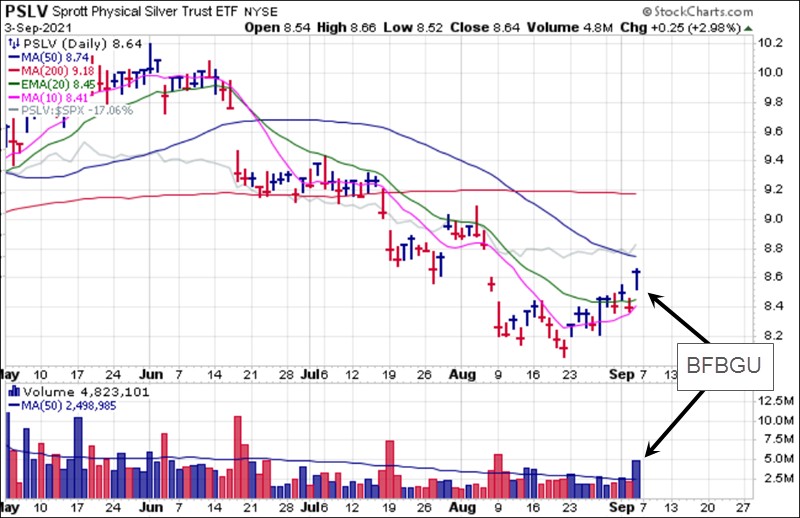 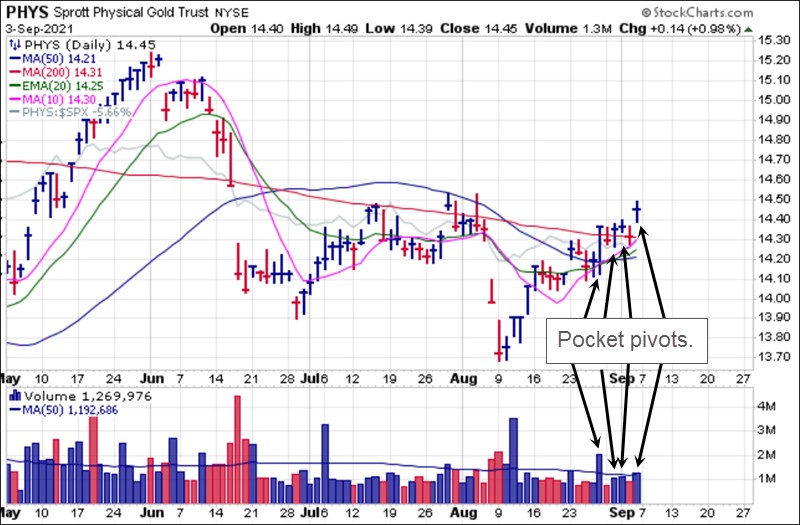 Two Fridays ago we reported on a possible pocket pivot in Facebook (FB) which did not hold up by the end of the day as volume levels receded into the close. The following Monday, however, FB posted a pocket pivot breakout which we considered to be a bit extended at the time to warrant a report. The ensuing pullback to the 10-day moving average this past Friday may offer a lower-risk long entry as a voodoo set-up with volume drying up to -44.4% below average. The 10-day line is then used as a minimum selling guide, and the 20-day exponential moving average (green line) serving as a maximum selling guide. The week before FB CEO Mark Zuckerberg was quoted in an interview as saying that FB intends to transition from a social-networking company to a metaverse company. While that makes for a good word salad, we look to the technical action as the final arbiter of just how meaningful this is, and so far the stock is holding up on the recent pocket pivot breakout move. If FB wants to stay in pole position, they as well as the other leading tech juggernauts such as GOOG and AAPL will have to also engage in becoming such “metaversal” companies by hiring top minds. 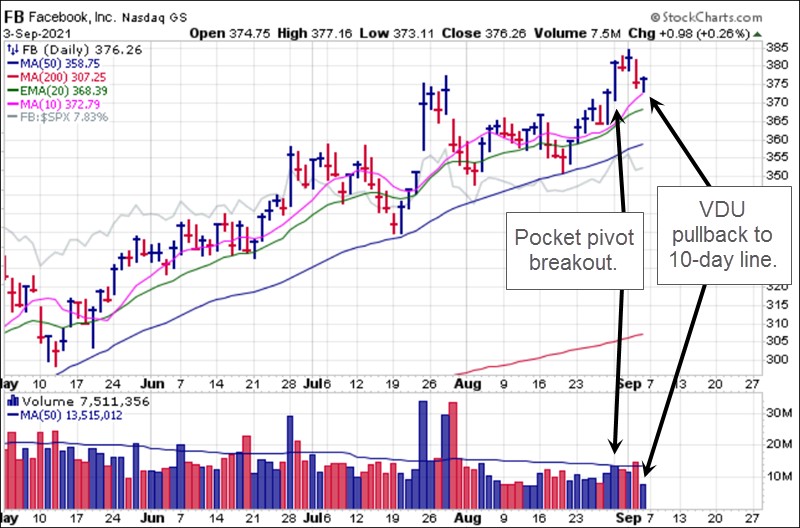