The VoSI Report Watch List is a compilation and reference list of stocks for which Pocket Pivot or Buyable Gap-Up Reports have been issued. Stocks on the List may or may not be in proper buy positions, and investors should exercise discretion and proper judgement in determining when and where stocks on the List can be purchased. The following notes are intended to assist in this process. Please note that members can enlarge the List image by clicking on the body of the email and then holding the Control Key while pressing the "+" key until it is large enough to read.
General Observations:
The announcement of a Phase One trade deal between the U.S. and China sent the major market indexes to all-time highs by the end of the week. Friday's action had the look of churning on above-average volume as investors sold into the news. Under the surface, and despite the limited trade deal, individual socks remain quite mixed and mostly trendless. 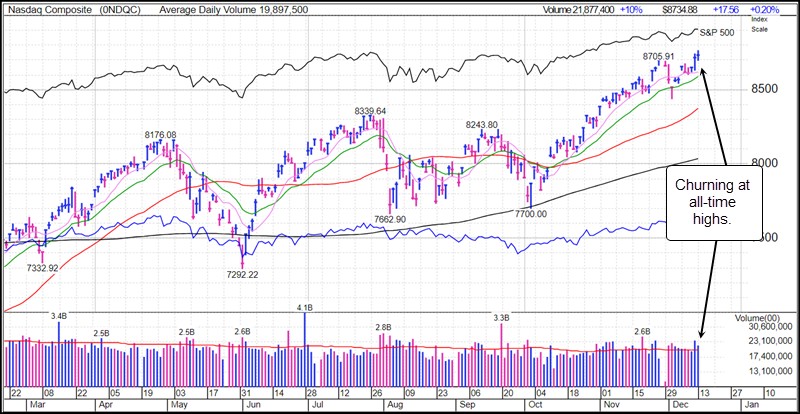 The Market Direction Model (MDM) remains on a buy signal. Trend following in this choppy QE-driven market has worked as long as the bandwidth is broadened to accept deeper corrections. The fact is interest rates are headed lower and debt is headed higher. Both are at or near all-time record levels. The global economy is teetering on the brink thus 1) the need for global central banks to continue to print, 2) the capital gets used to buy stocks thus the elevated P/Es despite the lack of growth, 3) central banks are often the majority shareholders in major companies, 4) exponential technologies could soften the next recession as their growth is material, and 5) trend following wizards as a whole continue to underperform and even the best performers have had to adjust their methods.

Several names on the Report Watch List posted higher highs, including Apple (AAPL), which posted a continuation pocket pivot at its 10-dma on Thursday. Activision Blizzard (ATVI), Microsoft (MSFT), and Shopify (SHOP) also all made higher highs this past week. All are extended currently and not in buyable positions.

We reported on a few new additions to our Report Watch List this past week. Enphase (ENPH) posted a pocket pivot at the 10-dma, putting it in a buyable position here using the 10-dma as a selling guide. 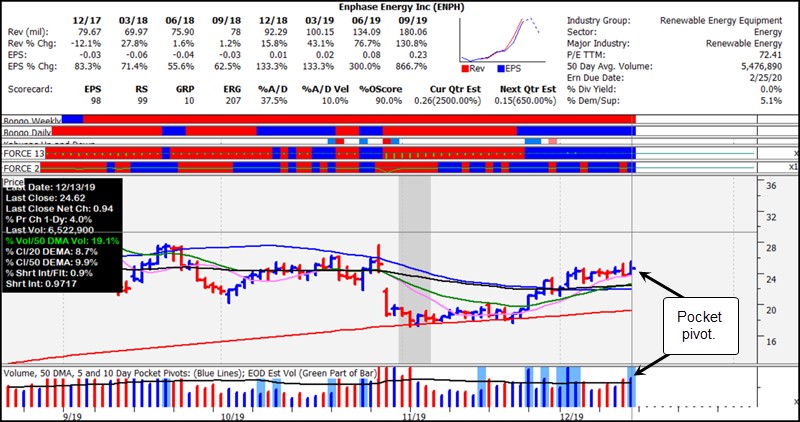 Tesla (TSLA) posted a pocket pivot as it gapped up from the 10-dma on Wednesday. The stock is extended here and should be watched for pullbacks to the 10-dma or 20-dema as the two shorter moving averages try to catch up to the price. 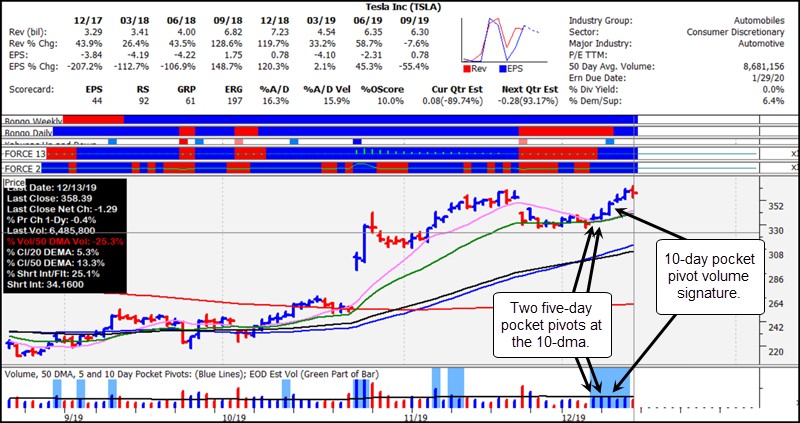 UltraClean Holdings (UCTT) posted a pocket pivot on Tuesday along its 10-dma and 20-dema and attempted to breakout on Thursday. As is often the case in this market, that breakout did not hold. The stock is now pulling back towards the 10-dma which would offer a lower-risk entry close to the line while using it as a tight selling guide. 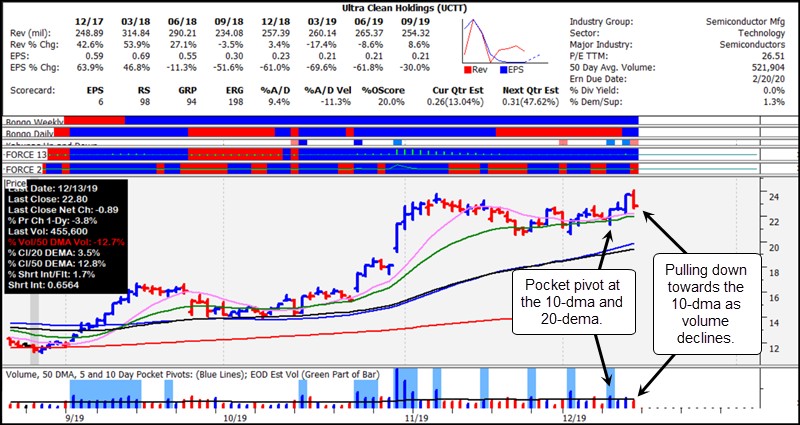 Crocs (CROX) is holiding tight along its 10-dma and 20-dema as volume dries up in the extreme. This puts the stock in a lower-risk entry position using the 20-dema as a tight selling guide or the 50-dma as a wider selling guide depending on one's risk-preferences. 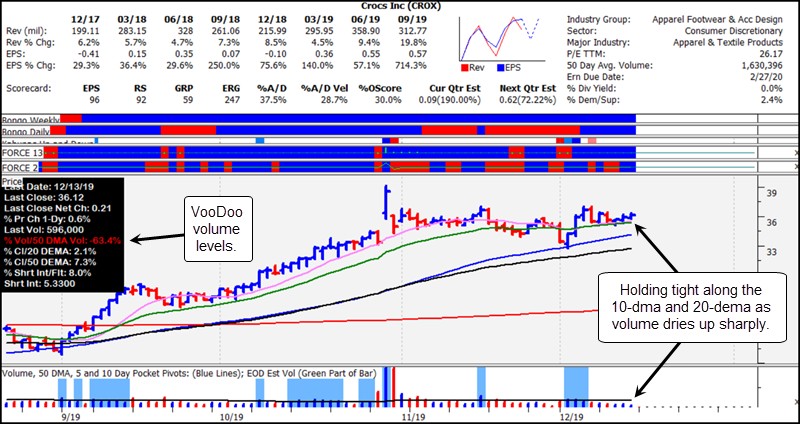 The other retailer on the list, Lululemon Athletica (LULU), sold off hard after reporting earnings this past week. On Thursday the stock broke below its 20-dema but closed back above the line on very heavy volume. Volume declined on Friday as the stock again broke below the 20-dema but again managed to recover and close back above the line. This can be treated as a moving-average undercut & rally type of long set-up where the stock can be bought here using the 20-dema as a tight selling guide, or the Thursday and Friday intraday lows in the 318-319 price area as a wider selling guide (about 2%). 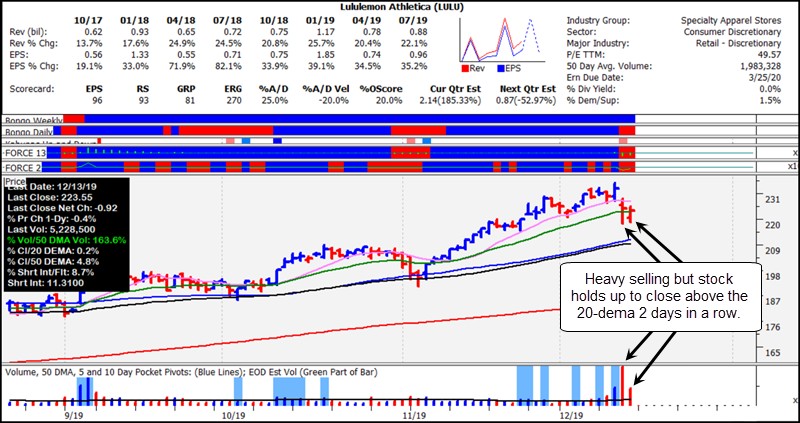 Facebook (FB) was hit hard on Thursday after the Federal Trade Commission announced it was considering an injunction against the company. It continued lower on Friday but is now approaching the 50-dma. There are three prior lows in the pattern, and FB has already undercut the nearest one at 195.08, so  one can watch for a possible undercut & rally (U&R) long  set-up to materialize on any rally back  up through  that low. The other two lows in November would only come into play if FB continues lower and eventually drops below those price lows. This is a fluid situation but the pattern has several dynamics with respect to potential U&Rs and moving-average support that make it interesting from an Ugly Duckling/OWL perspective. 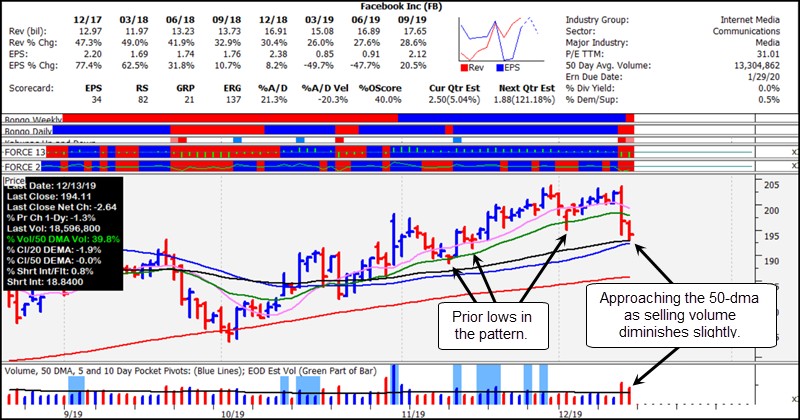 Penumbra (PEN) is on the verge of violating its 50-dma. The stock had a nice swing-trade type of run from the October pocket pivot, but ran into trouble once it started to breakout in late November, typical for most breakouts in this market. The stop-out point would have been on the breach of and failure at the 20-dema on Monday. 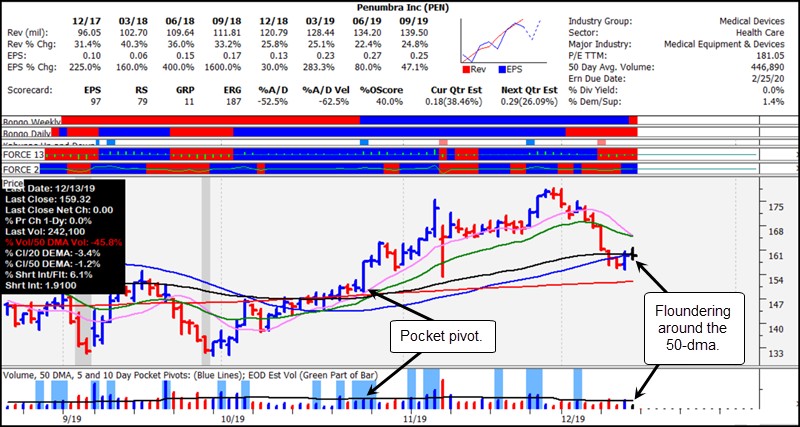 While the trade news is seen as a near-term panacea for the market and the U.S. economy, it was interesting to see a sell-the-news mood hit the market on Friday. Most pundits were predicting big index moves, some as large as 5 or 10%, on the heels of a Phase One trade deal. Interestingly, both gold and silver closed up on Friday and are both in active U&R long entry positions using their 137.80 and 15.55 price levels as selling guides. We also note that Agnico-Eagle Mines (AEM), which is on the Report Watch List, posted a pocket pivot at the 10-dma on Friday. 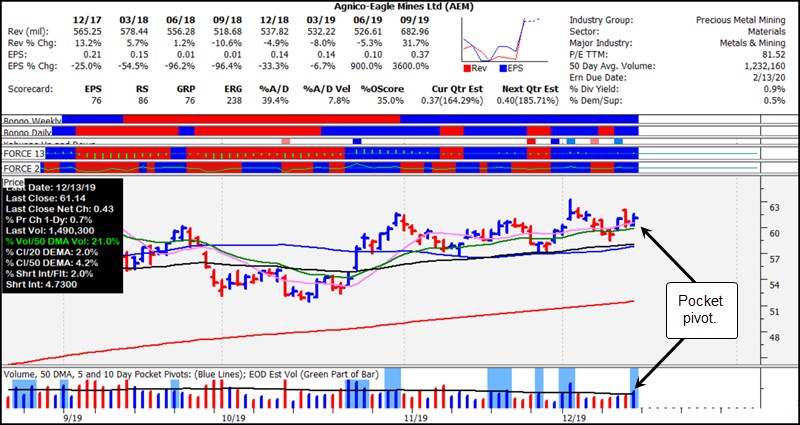 Franco-Nevada (FNV), meanwhile, continues to hold tight a long its 10-dma and 20-dema, and may be setting up for a breakout if precious metals can maintain their current U&R long entries. 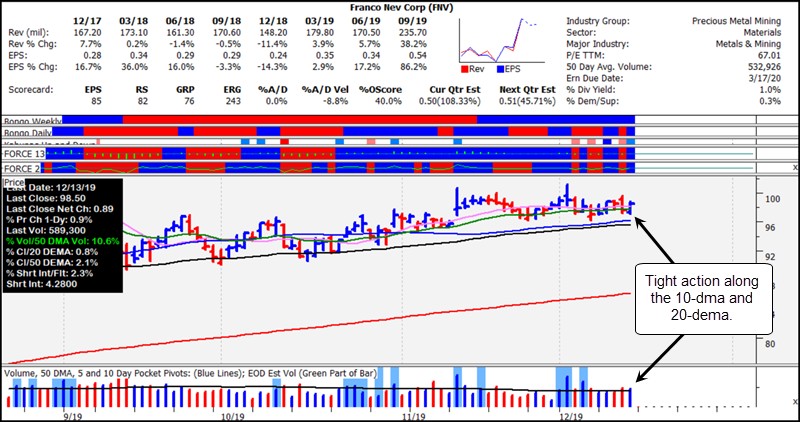 In our view a "Santa Claus Rally" into year-end is not a given. The situation remains fluid, and the fact that the market did not rally sharply on Friday following the trade news indicates something of a sell-the-news mood. We'll see if there is a delayed, strong upside reaction this week, but with the indexes quite extended on the upside we would also not be surprised to see a pullback.