The VoSI Report Watch List is a compilation and reference list of stocks for which Pocket Pivot or Buyable Gap-Up Reports have been issued. It is not intended as a "buy list" or a list of immediately actionable recommendations. Stocks on the List may or may not be in proper buy positions, and investors should exercise discretion and proper judgement in determining when and where stocks on the List can be purchased. The following notes are intended to assist in this process. Please note that members can enlarge the List image by clicking on the body of the email and then holding the Control Key while pressing the "+" key until it is large enough to read.
General Observations:
The character of the market rally since early October is now showing a sharp change of character as distribution and heavy-volume selling amid a great deal of daily and intraday volatility begins to take hold. Whether this leads to a normal correction or something worse is unknown. But with the global economy experiencing a massive debt bubble thanks to the mind-numbing amounts of QE that have been injected into the system by global central banks, an exogenous event like the current corona-virus crisis could slow things down enough to prick the extremely thin skin of the current massive debt bubble. That could lead to a deeper correction than many expect, and so we believe right now your best defense is a strong and active defense. Heed your stops! 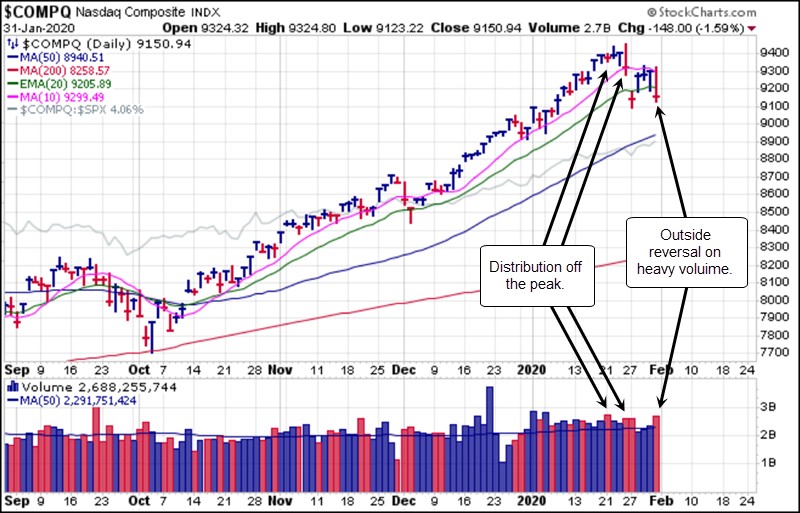 Notable Action:
Big-stock NASDAQ names that were previously rallying with no let-up in sight have finally cracked off their peaks. Apple (AAPL) has failed on Wednesday's buyable  gap-up (BGU) after earnings, while Microsoft (MSFT) has started to fail on its own post-earnings BGU from Thursday. Alphabet (GOOG) posted a sharp reversal at the 10-dma and closed just below its 20-dema on Friday on heavy selling. Facebook (FB) was slammed on Thursday following its earnings report and then failed to hold support at the 50-dma on Friday when it sharply broke through the line on heavy selling volume. Thus we are seeing a change of character in these names, which may be problematic for the market as a whole. 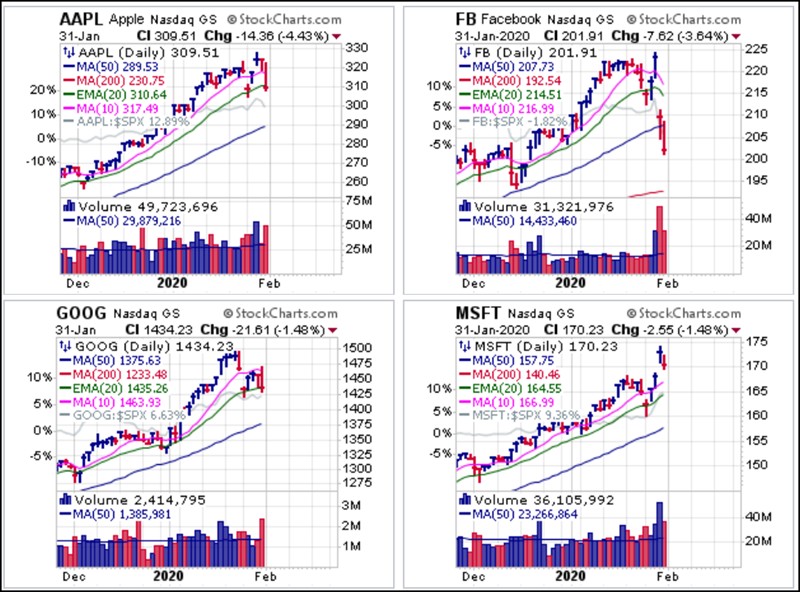 We would note that just five stocks make up 18% of the S&P 500 Index's weighting, the highest in history, and four of those five are shown on the group chart above. The fifth is Amazon.com (AMZN). As we have discussed many times previously, these names have led the market on seemingly unstoppable rallies because they represent the alternative-currency situation where massive amounts of QE liquidity must find a home, and the money tends to gravitate towards long-term established and reliable companies. All five of these names fit that bill. In our view, such an historically high concentration where the stocks of five of the biggest long-term established, industry-leading and reliable companies make up nearly 1/5th of the S&P 500 Index confirms the Alt-Currency Theory.

Other names on the Report Watch List are either failing on recent breakouts or starting to falter at or near their 50-dmas. This also strikes a cautionary note for the general market. But as we've written in recent Market & Report Watch List Review reports, we saw no reason to keep piling into the long side of this market as early as two weeks ago. The upside extension in most leading names and the major market indexes provoked that assessment, at least from the perspective of not chasing the market on the upside. 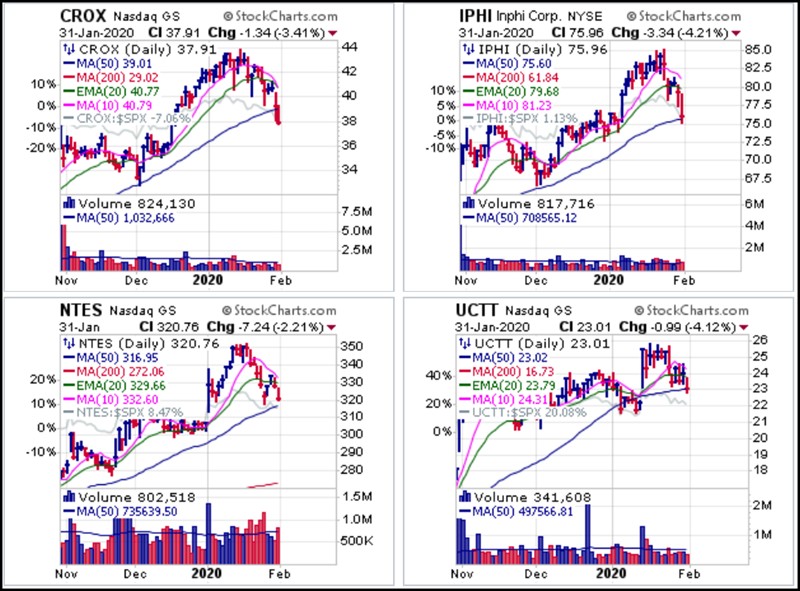 Amid all the chaos and selling, Tesla (TSLA) continues to forge all-time highs as it pushes well above the $600 Century Mark on a gap-up move  following earnings. The stock is extended, in our view, primarily because the overall upside move has become so extended that it is highly vulnerable  to a sharp pullback. For now, the 10-dma would serve as your primary selling guide based on the Seven-Week Rule. 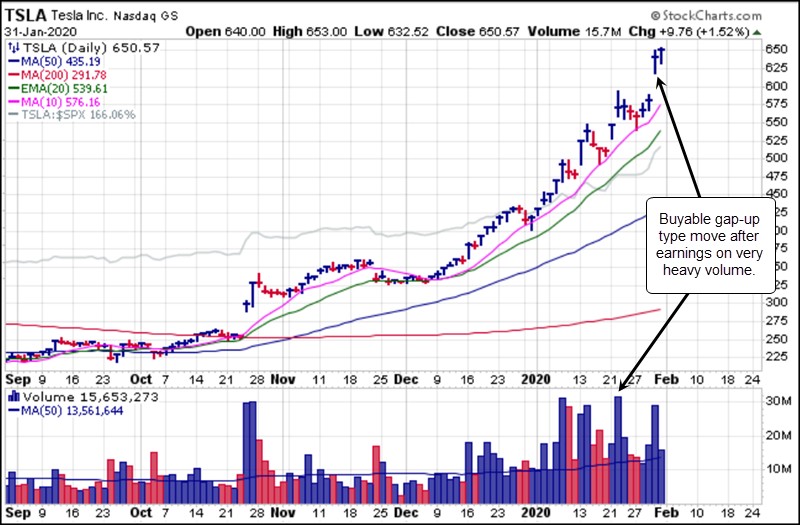 Meanwhile, gold and silver continue to rally, and Bitcoin via the Grayscale Bitcoin Trust (GBTC) continue to act well. The SPDR Gold Shares (GLD) hit a higher high on Friday while the iShares Silver Trust recovered and bounced smartly off of primary support at its 50-dma on Wednesday into the end of the week. 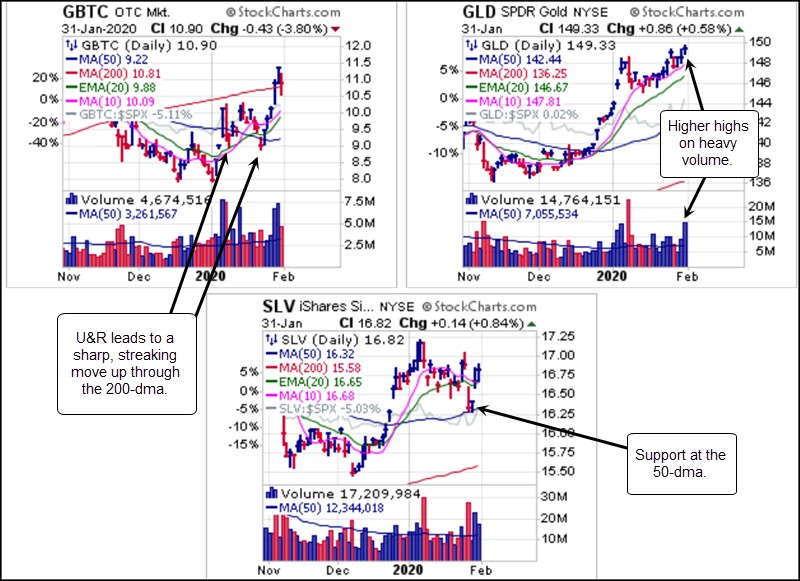 Members should review their absolute and trailing stops and be prepared to exercise those stops if the market situation continues to deteriorate and they have not been stopped out on certain positions already. Caution should prevail as uncertainty rises exponentially. Corrections in this QE environment, while often contained to several percent or less,  tend to be short and sharp as major averages and stocks can nosedive in a hurry. And while major averages have not corrected beyond roughly -11% since Dec-2018, corrections of roughly -20% have happened over the past several years so can certainly happen again.

Despotic regimes come in a broad spectrum of flavours. Modern-day China’s authoritarian rule is masked by high rates of growth, technocentric cities of immense progress such as Shenzhen, and pole position in AI. Some of the smarter guys who have ample experience with China such as Jim Rogers and Ray Dalio seem to forget that China’s regime sits on quicksand. An exogenous event such as the quarantining of flight paths due to corona can cripple trade which further hampers China's slowing economy and perhaps may be the catalyst that brings down this house of cards.

Of course, this remains to be seen and could still be a distance away, but the fear trades of precious metals and bitcoin can be a useful way to counter any such future bear markets where majors correct well beyond -20%, regardless of companies and technologies undergoing exponential growth.
This information is provided by MoKa Investors, LLC DBA Virtue of Selfish Investing (VoSI) is issued solely for informational purposes and does not constitute an offer to sell or a solicitation of an offer to buy securities. Information contained herein is based on sources which we believe to be reliable but is not guaranteed by us as being accurate and does not purport to be a complete statement or summary of available data. VoSI reports are intended to alert VoSI members to technical developments in certain securities that may or may not be actionable, only, and are not intended as recommendations. Past performance is not a guarantee, nor is it necessarily indicative, of future results. Opinions expressed herein are statements of our judgment as of the publication date and are subject to change without notice. Entities including but not limited to VoSI, its members, officers, directors, employees, customers, agents, and affiliates may have a position, long or short, in the securities referred to herein, and/or other related securities, and may increase or decrease such position or take a contra position. Additional information is available upon written request. This publication is for clients of Virtue of Selfish Investing. Reproduction without written permission is strictly prohibited and will be prosecuted to the full extent of the law. ©2022 MoKa Investors, LLC DBA Virtue of Selfish Investing. All rights reserved.
FOR OUR FREE MARKET LAB REPORT :