The Report Watch List is a compilation and reference list of stocks for which Pocket Pivot or Buyable Gap-Up Reports have been issued. It is not intended as a "buy list" or a list of immediately actionable recommendations. Stocks on the List may or may not be in proper buy positions, and investors should exercise discretion and proper judgement in determining when and where stocks on the List can be purchased. The following notes are intended to assist in this process. Please note that members can enlarge the List image by clicking on the body of the email and then holding the Control Key while pressing the "+" key until it is large enough to read.
General Observations:
A much better than expected jobs number on Friday sent the indexes to the downside on Friday morning, with the S&P 500 Index dropping nearly 1%. The number was initially seen as quashing prospects for a 50-basis point rate cut from the Fed at their July meeting. After further consideration, the market decided it was satisfied with the probability of a 25-basis point rate cut and found its intraday feet to rally back up to the highs of its daily price range, as we see on the chart of the NASDAQ Composite Index, below. The uptrend remains intact, although the action on an individual stock basis lacks the thrust you might expect given that the major market indexes are all new highs. 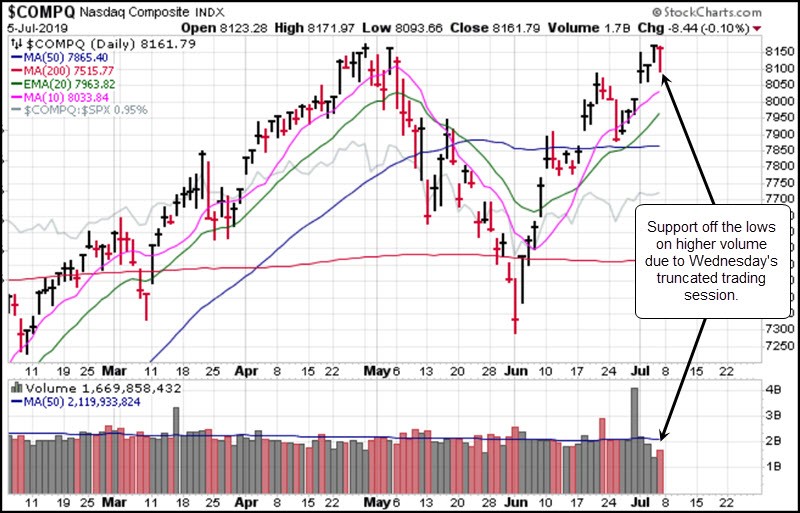 The Market Direction Model (MDM) remains on a buy signal. While the CME Fed Fund Futures now predicts just 2 rate cuts over the next 4 meetings instead of 3, the trend for more QE and reduced rates at home and abroad remains intact. Further, one decent jobs report does not a strong economy make.

The Report Watch List is sorted by expected earnings date, so that the earliest report dates are at the top. We can see that Chipotle Mexican Grill (CMG) will be the first expected to report on July 23rd. The stock is sitting right on top of a recent base breakout point, hence remains actionable on this basis. However, we would not advise taking a fresh position ahead of earnings unless the stock were to build a profit cushion between now and the report date. CMG was first reported back in February, some 150 points below where it is now.

Funko (FNKO) had a big spin-out on Tuesday as it broke 20% to the downside suddenly and then closed about mid-range on very heavy selling volume. We have yet to find any news responsible for the move. Nevertheless, it has shaken up buyers to the point where they are stepping aside and the stock is now back at its 50-dma and has failed on its prior breakout attempt over two weeks ago. Brave souls might try and buy the stock here while using the 50-dma as a tight selling guide, which at least keeps risk to a minimum, barring any further sudden 20% spin-outs to the downside. 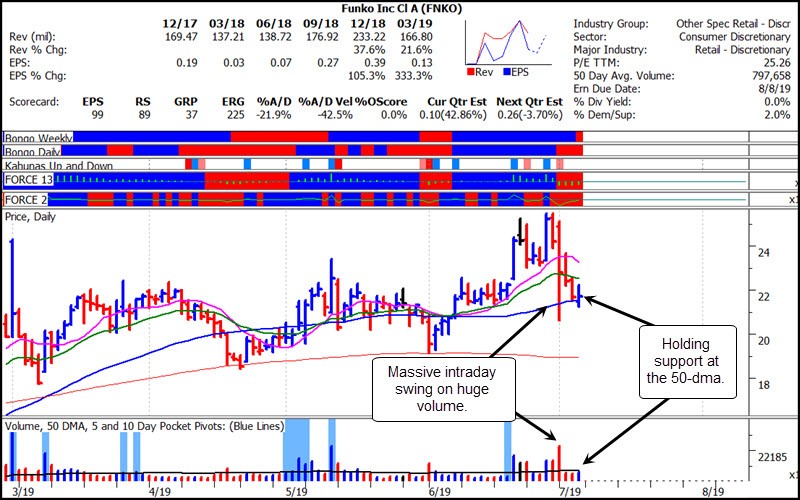 IAC/Interactive (IAC) demonstrates the paradox of this market whereby big-volume down moves, once seen as bearish signs of further, inevitable downside, have become buy signals. In this case, IAC broke below a prior May low in the pattern two weeks ago and then posted an undercut & rally (U&R) move back up through that low. Since then it has regained its 50-dma although volume has been light over the past week. 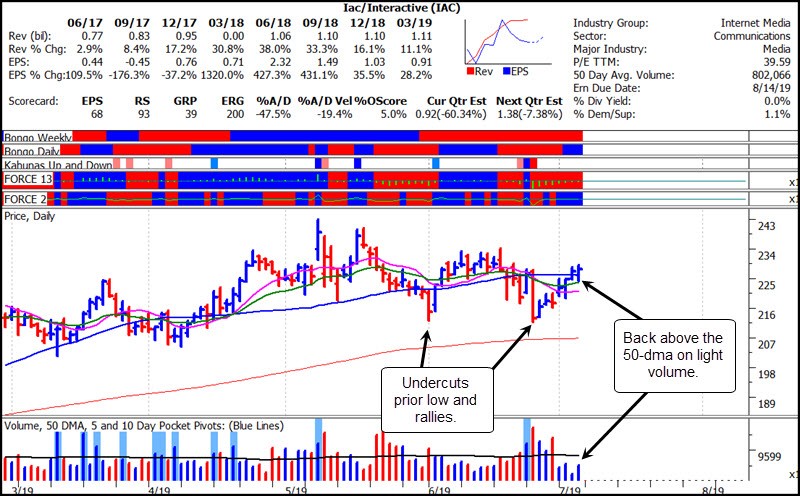 Note how Lululemon Athletica (LULU) posted a big-volume down day back in May, but like so many other down-big-on-volume moves in this market, it turned into a buy signal as the stock undercut and rallied back above a prior low the pattern. From there, LULU broke out after earnings, but two breakout attempts have failed, pointing out the futility of chasing breakouts in this market. It remains in a buyable position, using the 20-dema as a selling guide ahead of its late-August earnings report date. 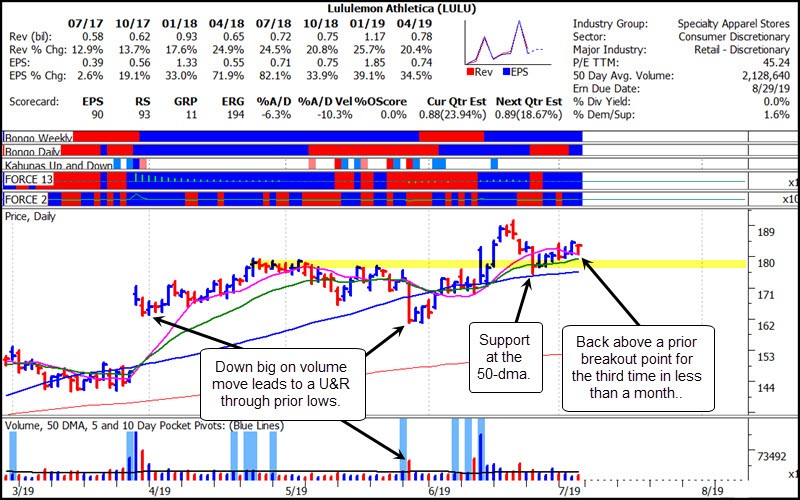 Shockwave Medical (SWAV) looks weak as it dips below its 50-dma. But note how the past two days have produced U&R moves back up through the prior week's low. In this position, we would look for a quick move back above the 50-dma as a moving-average U&R as confirmation of the current price U&R. In any case, the stock is technically buyable here based on the price U&R, using the prior low at 53 as a tight selling guide. 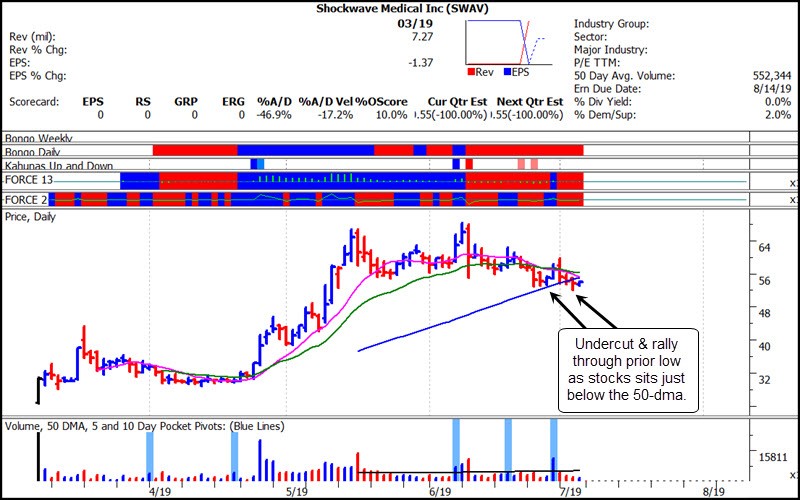 Rare-earth metals play Tronox (TROX) is one of the better Ugly Duckling plays in this market. Note the big-volume breakdown back in late May that, like other down-big-on-volume moves in this market, turned out to be a buy signal. Note the large number of blue-highlighted volume bars along the 10-dma, 20-dema, and 200-dma indicating five- and ten-day pocket  pivots that occured in the latter part of June. Those led to a strong pocket pivot coming up through the 50-dma, and TROX has done a very nice job of tightly consolidating its strong move through the 50-dma. From here, pullbacks to the rapidly-rising 10-dma can be watched for potentially lower-risk entry opportunities. 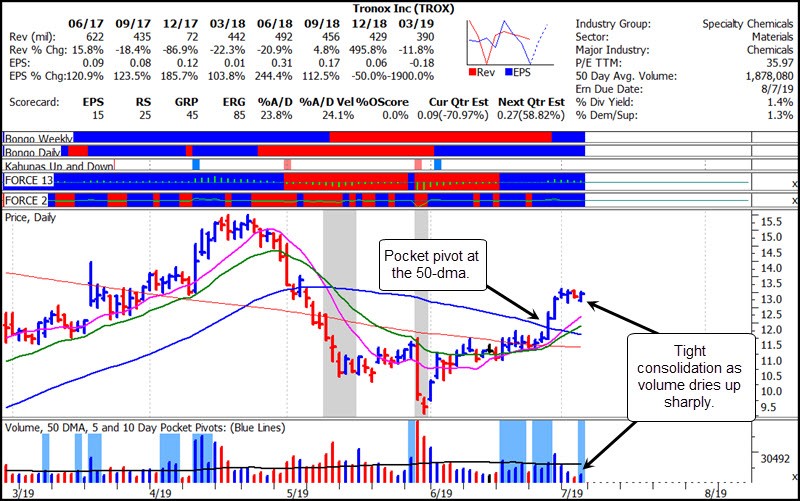 Zoom Video Communications was clocked two weeks ago after a downgrade from Goldman Sachs, but the 50-dma showed up in just in time this past week to provide near-term support and a convenient trampoline from which the stock has bounced. We originally reported on the stock as a buyable gap-up following earnings over a month ago, but that BGU has long since failed. We have kept it on our watch list as we like the story and have been looking for another entry on the pullback. This past week's pullback to the 50-dma provided a nice reference for a lower-risk entry opportunity, and ZM is back above its 20-dema. We would watch for any retest of the 50-dma as another potential, lower-risk entry from here. 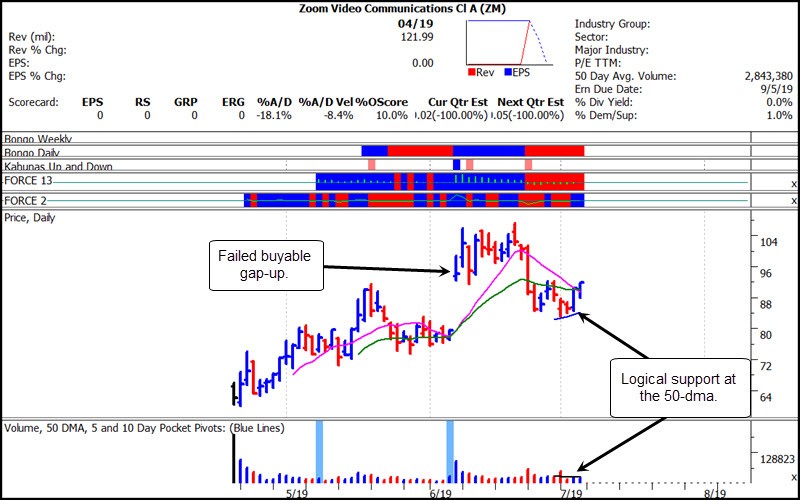 ZScaler (ZS) broke out on Friday, but the move came on only slightly above-average volume. We note that the "proper" buy point occurred on a U&R move the prior week. Some will try and tell you that ZS is in an "unusual ascending base," but the ascending base concept  is based on the idea of a shallow, ascending uptrend channel forming in a stock during a market decline, not a market uptrend. Therefore, this cannot be an ascending base. However, we would note that the predictive value of an ascending base with respect to the magnitude of any potential move from such a base is mythical, at best. There is no statistical evidence, outside of a handful of cherry-picked examples taken from extremely strong market environments (which in our view is a woefully inadequate sample size), such as late 1999, to indicate that a so-called ascending base automatically leads to huge price gains. In late 1999, virtually any base breakout led to huge price moves. In other markets, the sample size is a bit small though the concept of a stock that can buck a downtrend in the general market is contextually sound thus is one indication of strength. We tend to see ZS's current base as more of a base-on-base formation. Whether it can break out of this formation and post a decisive, strong upside run from here will likely depend on the general market situation. 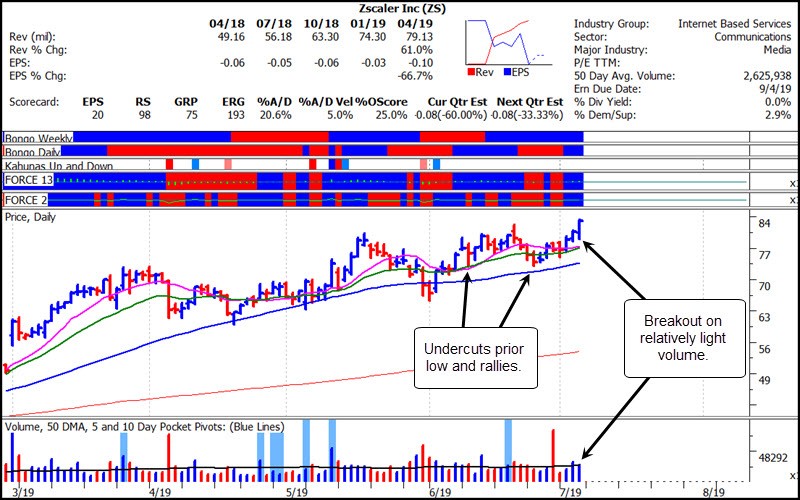 Most of the names on our Report Watch List have acted well, and those with earnings reports coming up in July may likely bide their time until their respective reports are out. We would tend to favor any long entry opportunities that arise in names that report in August or later as this allows enough time for a potential upside move and reasonable profit cushion to develop ahead of an earnings report.
This information is provided by MoKa Investors, LLC DBA Virtue of Selfish Investing (VoSI) is issued solely for informational purposes and does not constitute an offer to sell or a solicitation of an offer to buy securities. Information contained herein is based on sources which we believe to be reliable but is not guaranteed by us as being accurate and does not purport to be a complete statement or summary of available data. VoSI reports are intended to alert VoSI members to technical developments in certain securities that may or may not be actionable, only, and are not intended as recommendations. Past performance is not a guarantee, nor is it necessarily indicative, of future results. Opinions expressed herein are statements of our judgment as of the publication date and are subject to change without notice. Entities including but not limited to VoSI, its members, officers, directors, employees, customers, agents, and affiliates may have a position, long or short, in the securities referred to herein, and/or other related securities, and may increase or decrease such position or take a contra position. Additional information is available upon written request. This publication is for clients of Virtue of Selfish Investing. Reproduction without written permission is strictly prohibited and will be prosecuted to the full extent of the law. ©2022 MoKa Investors, LLC DBA Virtue of Selfish Investing. All rights reserved.
FOR OUR FREE MARKET LAB REPORT :