The VoSI Report Watch List is a compilation and reference list of stocks for which Pocket Pivot or Buyable Gap-Up Reports have been issued. It is not intended as a "buy list" or a list of immediately actionable recommendations. Stocks on the lLst may or may not be in proper buy positions, and investors should exercise discretion and proper judgement in determining when and where stocks on the List can be purchased. The following notes are intended to assist in this process. Please note that members can enlarge the List image by clicking on the body of the email and then holding the Control Key while pressing the "+" key until it is large enough to read.
General Observations:
The S&P 500 Index posted an all-time high on Thursday, exceeding its prior peak by .05 S&P points. A small margin, to be sure, but enough to satisfy the media trumpets. The NASDAQ Composite and Dow Indexes remain below their all-time highs. 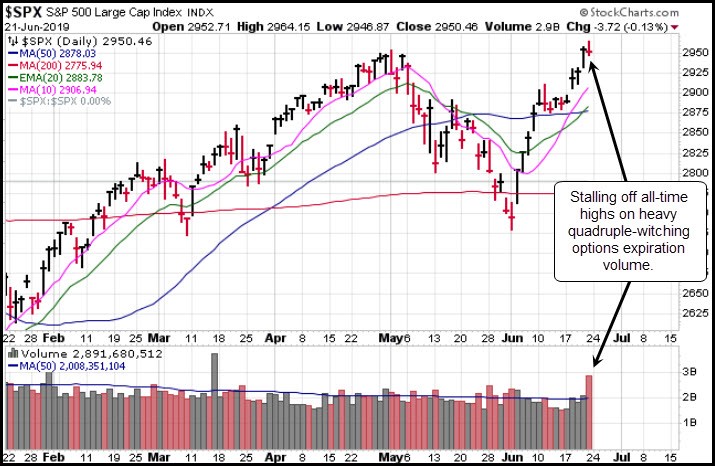 Small-caps, which are seen as barometers of a "risk-on" bullish tilt to the market, are lagging as the Russell 2000 Index remains well off its highs. It pulled back sharply on Friday while its Relative Strength vs. the S&P 500 made lower lows. This indicates a market that is perhaps not as robust as one might expect after the Fed all but ensured a rate cut at its July meeting and a subsequent sense of a "green light" for the market to go higher. Nevertheless, the market uptrend remains intact. CME Fed Futures is currently pricing in 3 rate hikes over the next 4 meetings.

The realization that global central banks now have their printing presses running at full tilt or, like the Fed, are ready to flip the switch again by lowering rates, has driven alternative currencies higher. The move to hedge against currency devaluation has sent Bitcoin higher in parabolic fashion, as shown by the daily chart of the Grayscale Bitcoin Trust (GBTC). This was first discussed as a long idea around $4.60 in a March 18th VooDoo Report and again in a Crypto-Report sent out a few days later. 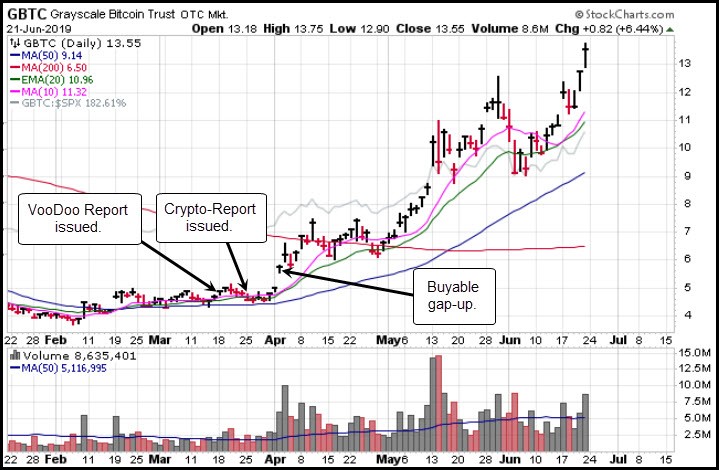 The potential for currency devaluations as global QE sits on the precipice of a new wave, has started to drive gold higher as well. This week the yellow metal broke out to a five-year high and looks poised to move higher, as shown on the weekly chart of the SPDR Gold Shares (GLD). Meanwhile, individual stocks remain a very mixed bag, with very little upside thrust seen in leading stocks following Wednesday's Fed announcement. Most stocks helping to drive the indexes higher are beaten-down industrials, metals, and oils. This may be cautionary, or it may simply indicate that the market has already come up quite sharply from its early June lows and now needs some time to digest those gains now that the Fed news is out. 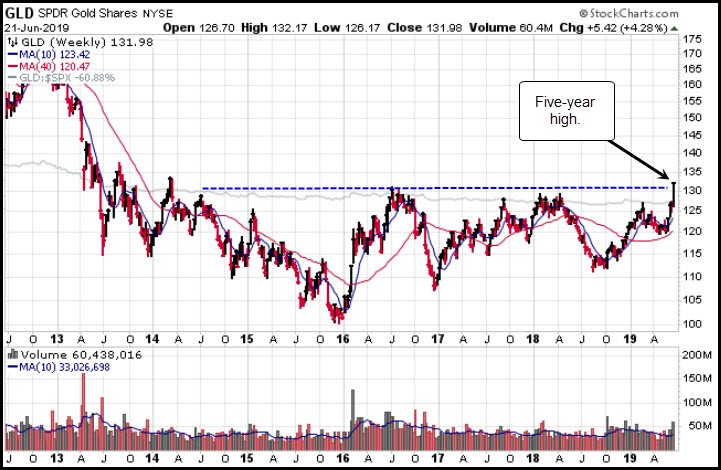 The Market Direction Model (MDM) remains on a buy signal that was issued on June 13th.

Notable Action:
Advanced Micro Devices (AMD) is again failing to hold its prior breakout as well as the pocket pivot it posted at the 20-dema on Tuesday. This is surprising action for the leading semiconductor name in the market, as the Fed's "green light" might be expected to provide the stock with the impetus to build on its recent base breakout. Instead, the breakout is faltering and in jeopardy again. 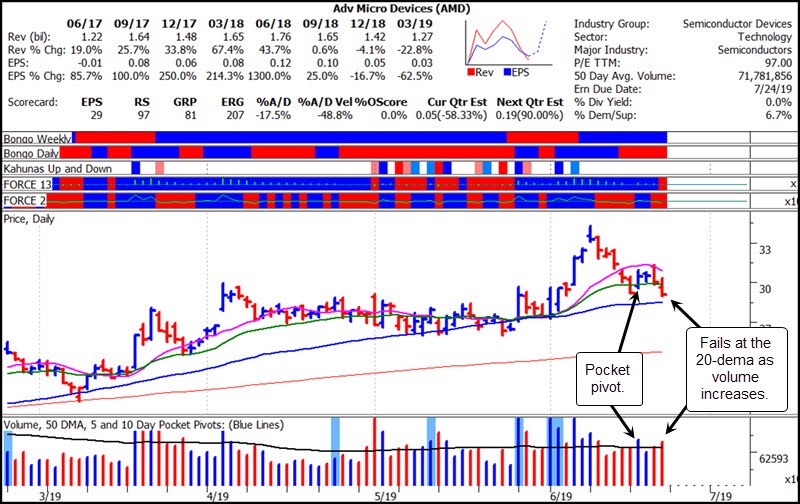 Uber (UBER) was reported on back on June 3rd as a possible pocket pivot early in the day but volume tapered off as the day progressed so a true pocket pivot was never posted. Since then, however, UBER has attempted to break out of a short IPO flag base, but that move came straight up from the lows of the pattern, making it vulnerable to failure. The stock then pulled in to test support at its 20-dema and again moved back up to the highs on Wednesday. It is now pulling into the 10-dma on the lightest daily volume seen in its short trading history. Technically, this would put the stock in a lower-risk entry position using the 10-dma or 20-dema as selling guides. 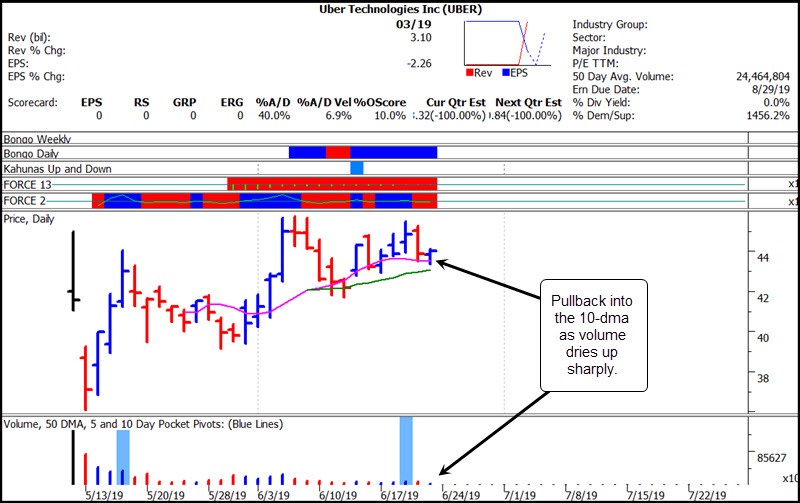 We never removed Facebook (FB) from our report watch list even after its massive-volume price break back in early June. That move looked quite ugly, but because a) the stock had stopped at the 200-dma and b) in this market, big price breaks on big volume tend to be buy signals, not sell signals, we did not remove it from the list. That proved fortuitous as the stock has rallied in a v-shaped recovery that cleared the 50-dma this past week on a buyable gap-up type of move after the company released details regarding its new Libra crypto-currency. After a brief move towards the 50-dma FB held its ground and has since rallied to a higher closing high. Technically, this is acting well, and one might consider looking for pullbacks to the 50-dma or the rapidly rising 10-dma, which is just starting to cross above the 50-dma, as potentially lower-risk entries. 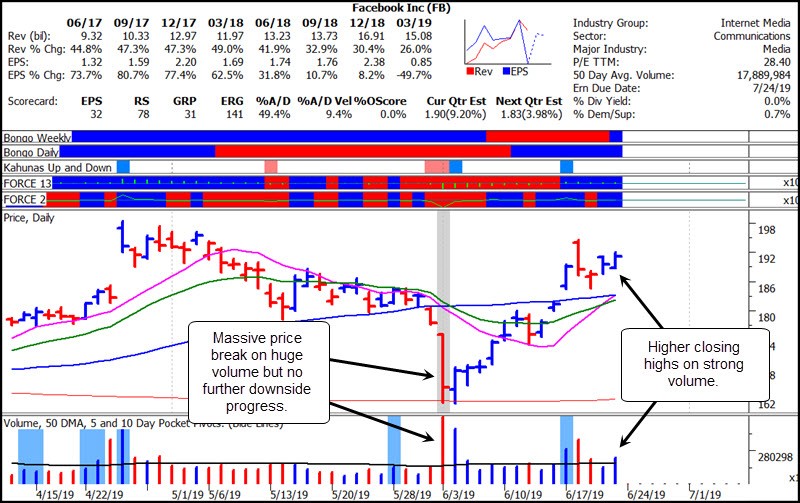 The phenomenon of big downside price breaks on heavy selling volume becoming buy signals rather than sell signals in this QE-infused market is in fact widespread. Here we see it at work again in Funko (FNKO). Like FB, FNKO was hit with big selling volume that took the stock right down to its 200-dma, but no further downside progress was seen. From there, FNKO simply turned back to the upside, regained its 50-dma, and set up tight sideways before breaking out on Thursday in a big-volume move. This is now extended, but can be watched for pullbacks to the breakout point as lower-risk entry opportunities. 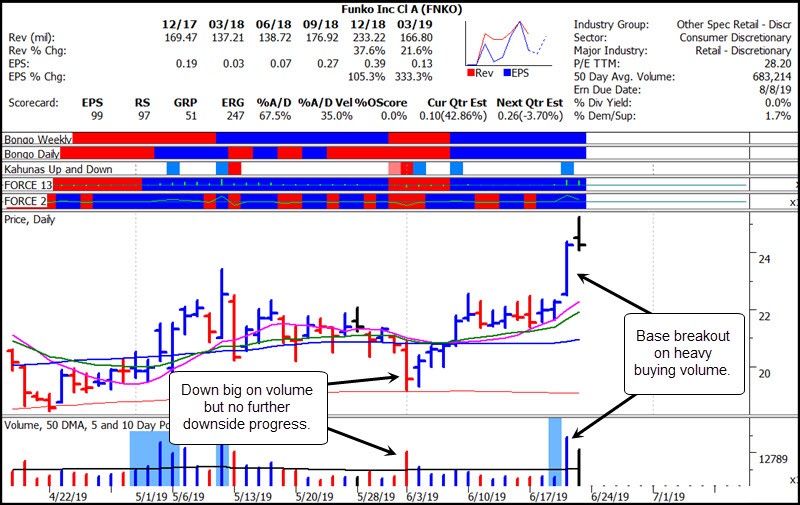 Tronox (TROX) has recovered from its sell-off of late May when it was hit with heavy volume. Once again, however, the down-big-on-volume phenomenon becomes a buy signal, and the stock simply turns back to the upside and regains its 10-dma. Since then, TROX has tracked tight sideways, and over the past four days has posted four pocket pivots, two five-day pocket pivots inside two ten-day pocket pivots along the 10-dma and 20-dema. At the same time, it is starting to poke its head above the 200-dma. This is an interesting rare-earth metals play, and the company is expected to post earnings of 68 cents in 2019 followed by a large 174% annual increase to  $1.86 a share in 2020. 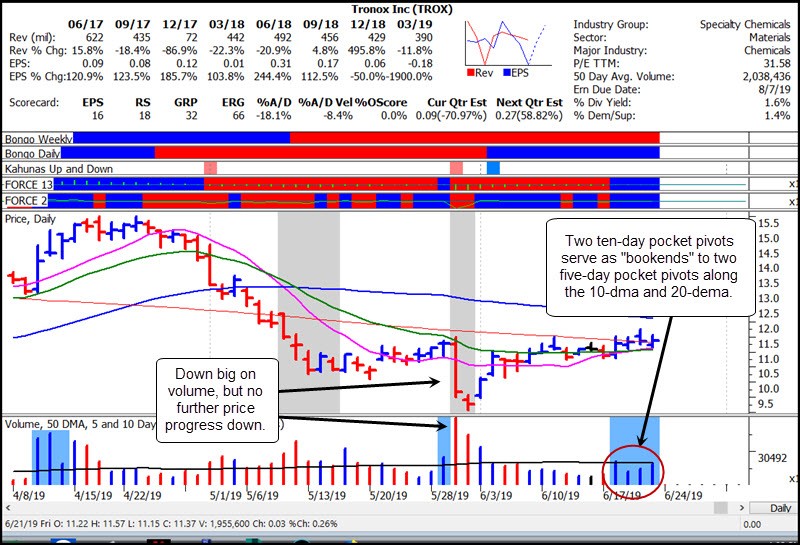 Among other names on the list, CyberArk Software (CYBR) and IAC/Interactive corp. (IAC) have closed below their 50-dmas, so should be watched for possible violations. Chipotle Mexican Grill (CMG) and Lululemon Athletica (LULU) are pulling into buying range of recent base breakouts. Heico (HEI), Atlassian TEAM), and Zoom Communications (ZM) are pulling into their 10-dmas, while Trade Desk (TTD) and Zscaler (ZS) should be watched as they pull in to test their 20-dmas. Pullsbacks to the 10-dma and 20-dma in leading stocks can often provide lower-risk entry opportunities, so should be watched for among all the names currently on our Report Watch List
This information is provided by MoKa Investors, LLC DBA Virtue of Selfish Investing (VoSI) is issued solely for informational purposes and does not constitute an offer to sell or a solicitation of an offer to buy securities. Information contained herein is based on sources which we believe to be reliable but is not guaranteed by us as being accurate and does not purport to be a complete statement or summary of available data. VoSI reports are intended to alert VoSI members to technical developments in certain securities that may or may not be actionable, only, and are not intended as recommendations. Past performance is not a guarantee, nor is it necessarily indicative, of future results. Opinions expressed herein are statements of our judgment as of the publication date and are subject to change without notice. Entities including but not limited to VoSI, its members, officers, directors, employees, customers, agents, and affiliates may have a position, long or short, in the securities referred to herein, and/or other related securities, and may increase or decrease such position or take a contra position. Additional information is available upon written request. This publication is for clients of Virtue of Selfish Investing. Reproduction without written permission is strictly prohibited and will be prosecuted to the full extent of the law. ©2022 MoKa Investors, LLC DBA Virtue of Selfish Investing. All rights reserved.
FOR OUR FREE MARKET LAB REPORT :