The VoSI Report Watch List is a compilation and reference list of stocks for which Pocket Pivot or Buyable Gap-Up Reports have been issued. It is not intended as a "buy list" or a list of immediately actionable recommendations. Stocks on the List may or may not be in proper buy positions, and investors should exercise discretion and proper judgement in determining when and where stocks on the List can be purchased. The following notes are intended to assist in this process. Please note that members can enlarge the List image by clicking on the body of the email and then holding the Control Key while pressing the "+" key until it is large enough to read.
General Observations:
New highs were seen this week in Advanced Micro (AMD), Heico (HEI), and Wingstop (WING). HEI and WING were especially pugnacious as they completely ignored the market sell-off at the start of the week and simply kept moving higher all week. AMD was significantly more volatile as it reversed from a breakout attempt on Monday, but ultimately it held support at the 50-dma and turned back to the upside with the general market. It then broke out on Friday, but quickly became extended. We would watch for support at the 10-dma on any pullback from currently extended levels.

After an ugly sell-off on Monday, the major market indexes found their feet and began rallying to the upside over the next four days. On the fourth day, Friday, the NASDAQ Composite Index posted a follow-through on volume that was barely higher at 0.17% above the prior day's levels. Volume was much lighter on the NYSE, so neither the S&P 500 nor Dow Jones Industrials Indexes posted follow-throughs of their own. The move was driven by sharp rallies in big-stock tech names on news that the U.S. would delay tariffs on certain Chinese products. A weak BLS jobs number on Friday also helped to add weight to the idea that the Fed will soon lower interest rates. While the follow-through day occurred on less-than-robust volume that was well below-average, it is the action of individual stocks that tells the more important side of the story. 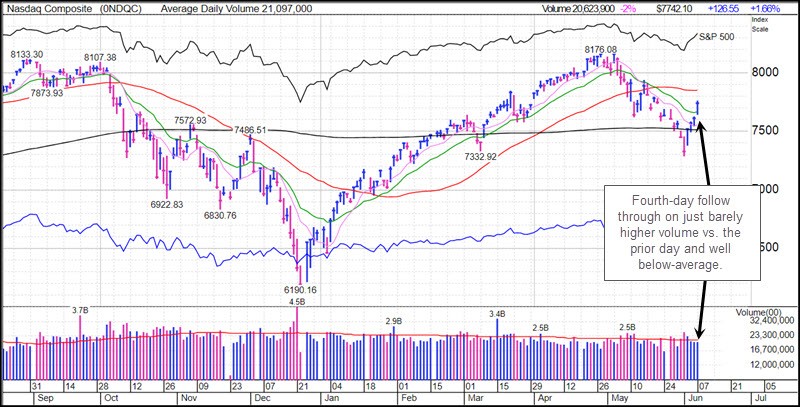 Stocks Expected to Report Earnings this Week: None.

Notable Action:
We reported on The Trade Desk (TTD) on Tuesday as it cleared its 50-dma on very strong buying volume. The move qualified as a powerful pocket pivot and the stock has since cleared to all-time highs. It is now extended but demonstrates some of the latent strength among leading stocks in this market. 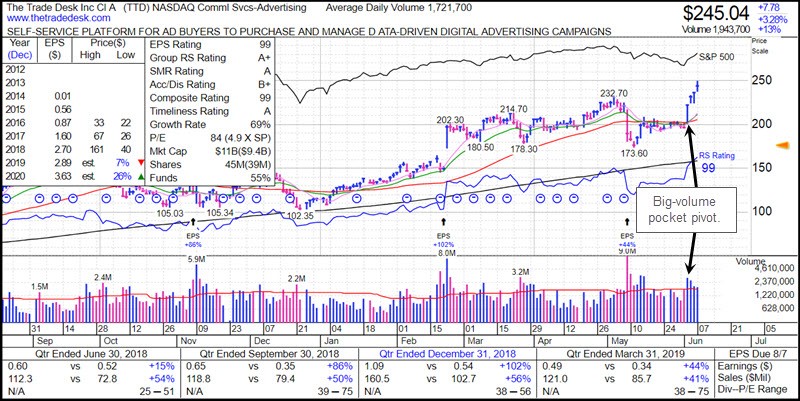 Lululemon Athletica (LULU) illustrates a common pattern among leading stocks. It was hit with big volume on a nasty sell-off Monday, like many other leading names in this market. There was no further downside action after Monday, and LULU turned right back to the upside as it rallied back through the prior 166.22 low, triggering a U&R long entry at that point. It has since retaken its 50-dma and held tight along the line over the past two days. LULU is expected to report earnings next week. 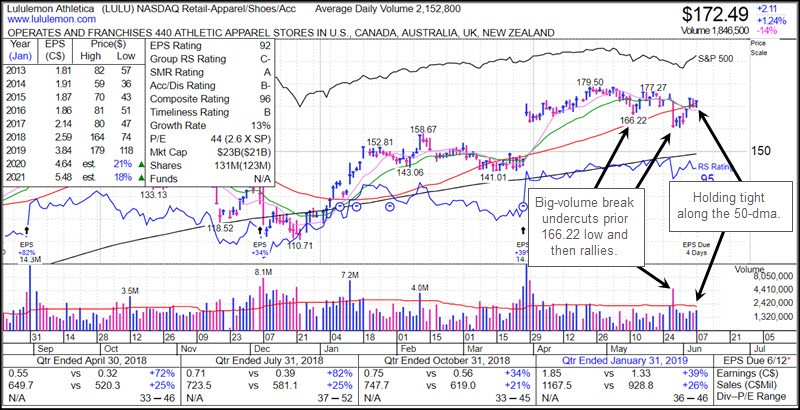 Tandem Diabetes Care (TNDM) has posted two pcket pivots over the past six days, most recently on Tuesday. It then tested the 10-dma on Thursday and is now back up near the highs of its current base. Further pullbacks to the 10-dma would offer lower-risk entries from here. 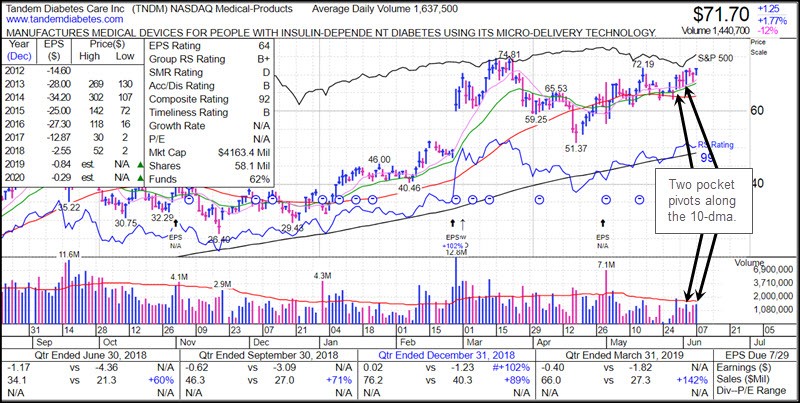 Tronox Holdings (TROX) illustrates the at times curious movement in stocks as they get slammed one day, only to turn right back around to the upside. The stock has posted a pocket pivot two weeks ago, on which we had reported, but the very next day broke support at the 10-dma and was hit with a -14.2% decline. An ugly move, to be sure, but it found its feet the next day and immediately turned back up through the prior 10.11 low in the pattern, triggering a U&R type of long entry at that point if one was alert to it. TROX is a rare-earth metals play with very strong forward estimates for 2019 and 2020. The big break the prior week occurred when the company provided earnings guidance on May 30th. Since then, TROX has announced a $100 million share buyback and the stock is now back above its 10-dma with volume drying up to -37% below-average on Friday. It again looks buyable here at the 10-dma as volume dries up in voodoo fashion, using the 10-dma as a tight selling guide. 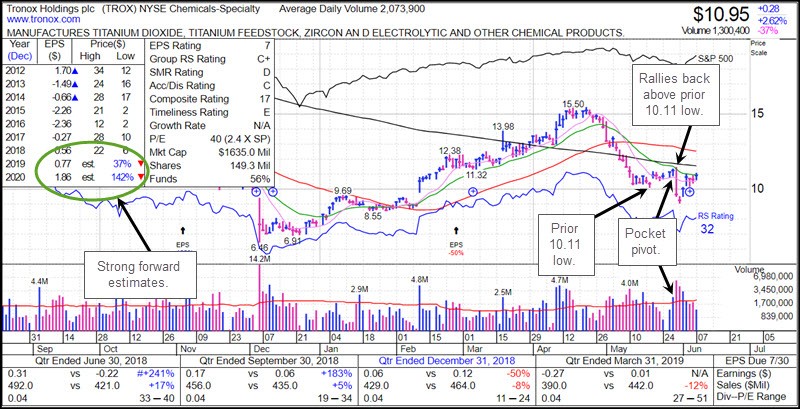 Zscaler (ZS) illustrates another quirky set-up seen with some regularity in this market, the "re-breakout." It's initial breakout failed two weeks ago, and the stock broke below its 50-dma. But it found its feet and on Friday broke out again, hence the re-breakout, on strong volume. This is buyable on the basis of the re-breakout using the 72.94 peak of the base or the confluence of the 10-dma and 20-dema as a tight selling guide. 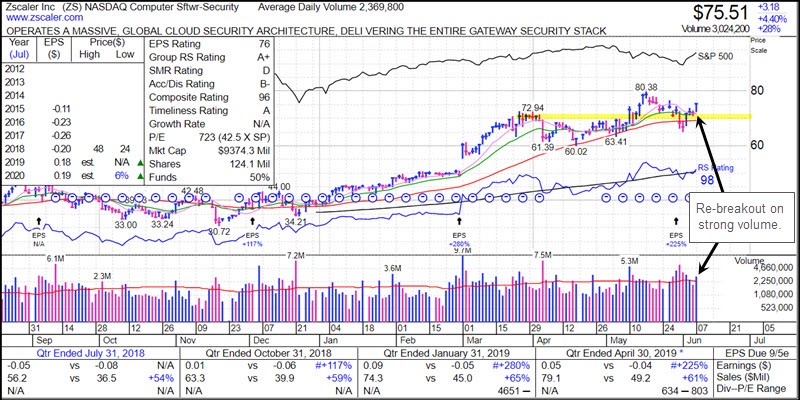