The VoSI Report Watch List is a compilation and reference list of stocks for which Pocket Pivot or Buyable Gap-Up Reports have been issued. It is not intended as a "buy list" or a list of immediately actionable recommendations. Stocks on the list may or may not be in proper buy positions, and investors should exercise discretion and proper judgement in determining when and where stocks on the List can be purchased. The following notes are intended to assist in this process. Please note that members can enlarge the List image by clicking on the body of the email and then holding the Control Key while pressing the "+" key until it is large enough to read.
General Observations:
A breakdown in trade talks between the U.S. and China combined with the U.S. raising tariff rates to 25% on Friday on $200 billion worth of Chinese goods that were already being taxed at a 10% tariff rate. This set off a volatile week-long sell off, the sharpest for the market in 2019.

The NASDAQ Composite and S&P 500 Indexes finally found support around their 50-dmas on Friday while the Dow found support at its 200-dma. That morning, at midnight, increased tariffs on Chinese goods went into effect, sending the market down at the open. But the indexes held deep support and rallied to close positive on the day. The move was logical given that a) the uncertainty of the tariff increase was now resolved, b) the indexes had already been declining for seven-days off the peaks of the prior week, c) many leading stocks had reached near-term oversold points after declining for several days, and d) QE remains near record levels with the Federal Reserve and other central banks in sync about accelerating the rate of printing should conditions worsen.

While the action made sense from standpoint of logical technical support at the moving averages, volume was lighter. Thus, it is unclear how far the bounce will carry, and whether we are moving into a deeper corrective phase. Certainly, many leading stocks have been running into trouble lately, as evidenced by our removal of several names from our Report Watch List. The action over the next few days should provide some clues in this regard, so for now that is what we are watching for.

Focus List Stocks Expected to Report Earnings this Week: Mimecast (MIME) on Monday after the close and CyberArk Software (CYBR) on Tuesday before the open. The list above is sorted by earliest earnings report date first for easy reference.

Notable Action:
Not all the action has been ugly, however. ZScaler (ZS) broke out on Friday on heavy volume. It had previously posted a pocket pivot on Monday along the 10-dma, 20-dema and 50-dma. The breakout is still within buying range, but earnings are expected in the first week of June.

We initially reported on Funko (FNKO) as a buyable gap-up last Friday after it reported earnings last Thursday. As we noted in last week's Market & Report Watch List Review report, while the BGU failed, the move still qualified as a pocket pivot along the 50-dma. It then posted another pocket pivot on Monday and moved to the top of its current price range before pulling back on Thursday as volume declined. On Friday, FNKO posted a low-range base breakout on heavy buying volume and remains within range of the breakout.

The following names are showing constructive action along their 20-day exponential moving averages: Chipotle Mexican Grill (CMG), Facebook (FB), Heico (HEI), Lululemon Athletica (LULU),Tandem Diabetes Care (TNDM), Viavi Solutions (VIAV). In each case, buying along the 20-dema offers a lower-risk entry since risk can be kept to a minimum by using the 20-dema as a selling guide.

Netflix (NFLX) has not technically violated its 50-dma yet, but it is acting weakly as it remains below the line. This comes after two failed breakout attempts. News that NFLX was looking to buy another company may have weight on it on Friday. We would want to see the stock regain the 50-dma soon to remain viable.

Yeti Holdings (YETI), which has roughly doubled since we first reported on the stock in early January, finally broke below its 20-dema last week. One could have used that as a trailing stop sell signal since the stock had obeyed the 20-dema all the way up since February. It is now undercutting and rallying back above three prior lows in the pattern but remains below the 50-dma. The company priced a secondary stock offering at $28.50 on Thursday, and so far the additional supply has been absorbed reasonably well. We would like to see the stock regain the 50-dma in short order as confirmation of the undercut & rally (U&R) move back above the three prior lows. 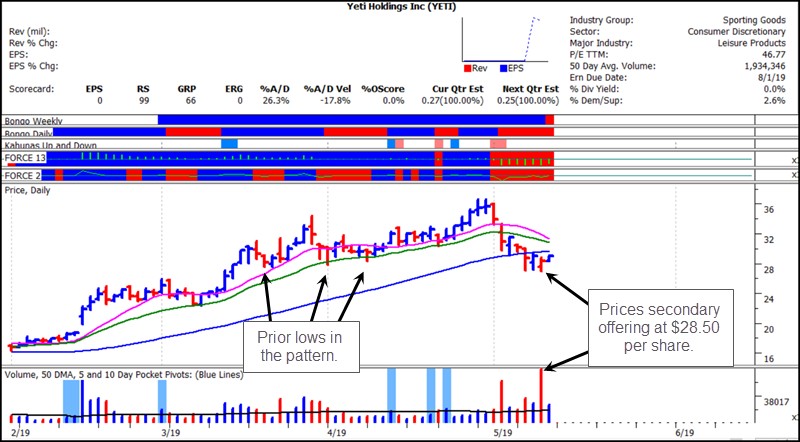 World Wrestling Entertainment (WWE) has been holding support along its 200-dma after gapping down from all-time highs over two weeks ago after it reported earnings. We first reported on the stock back in late March/early April when it posted several pocket pivots along its 50-dma. It is now sitting just below that price level, and has retested the 200-dma with volume drying up sharply. This could result in a bounce off the 200-dma, which could be tested by going long here and using the 200-dma as a tight selling guide.

Overall, we find the environment to be rather sloppy. Some stocks are working well, while others are having difficulties. If seeking to test the long side of this market with the idea that Friday's bounce off logical support will hold and the market will finds it feet again, risk should be kept to a bare minimum by using nearby support references at the appropriate moving average as a tight selling guide.
This information is provided by MoKa Investors, LLC DBA Virtue of Selfish Investing (VoSI) is issued solely for informational purposes and does not constitute an offer to sell or a solicitation of an offer to buy securities. Information contained herein is based on sources which we believe to be reliable but is not guaranteed by us as being accurate and does not purport to be a complete statement or summary of available data. VoSI reports are intended to alert VoSI members to technical developments in certain securities that may or may not be actionable, only, and are not intended as recommendations. Past performance is not a guarantee, nor is it necessarily indicative, of future results. Opinions expressed herein are statements of our judgment as of the publication date and are subject to change without notice. Entities including but not limited to VoSI, its members, officers, directors, employees, customers, agents, and affiliates may have a position, long or short, in the securities referred to herein, and/or other related securities, and may increase or decrease such position or take a contra position. Additional information is available upon written request. This publication is for clients of Virtue of Selfish Investing. Reproduction without written permission is strictly prohibited and will be prosecuted to the full extent of the law. ©2022 MoKa Investors, LLC DBA Virtue of Selfish Investing. All rights reserved.
FOR OUR FREE MARKET LAB REPORT :