I've always been a big fan of what I call "new merchandise." These are the relatively new, recent IPOs (some very recent, some not so recent) that represent the more up-and-coming areas of the market. Late last year we saw an entire fleet of hot IPOs go nuts on the upside, including Acacia Communications (ACIA), Twilio (TWLO), Impinj (PI), Airgain (AIRG), Trade Desk (TTD), and others. Some had their big upside moves and have since blown apart, such as ACIA, while others like PI and TTD remain viable. I'm not going to cover those in this VooDoo Report, but you might want to check out the charts of PI and TTD on your own.

In this report I'm more interested in some of the freshest of the fresh, new merchandise plays, and it is always new merchandise in the form of dynamic new companies that is the lifeblood of any market rally. Let's start with two of the oil names I've mentioned in recent real-time VooDoo Reports, Keane Group (FRAC) and Jagged Peak Energy (JAG), back when both were trading along their 50-dmas. Since setting a near-term low on June 21st, crude oil prices have moved higher giving some impetus to oil names. I would also note that the chart of the crude oil ETF, the U.S. Oil Fund (USO), is now running right into its 50-dma (you can check the chart out for yourself).

Consequently, both FRAC and JAG have moved higher since I first reported on them. FRAC, shown below, has been posting pocket pivots along its 10-dma and 50-dma over the past four days, and looks like it might be set for a breakout through the top of this current six-week range extending back to late May.  JAG, not shown, broke out of its own five-week price range on Wednesday, and is holding above the breakout point at 13.96. FRAC was best bought along the 50-dma when I first discussed it, but could be buyable here at the 10-dma based on the two pocket pivots seen this past week. Most likely, a move higher by either of these names will be accompanied by the USO moving up and breaking out through its 50-dma, so you want to monitor that as a confirming indicator for FRAC and JAG. 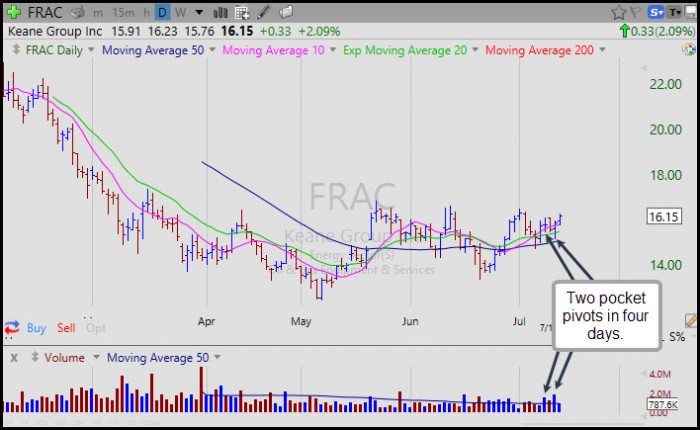 Canadian Goose Holdings (GOOS) has been busy absorbing the 12.5 million share secondary offering it priced at 20.50 back on June 27th. That secondary basically quadrupled the small float, and the stock has dipped all the way back below its 50-day moving average. In this market, however, that can often just set up a moving average undercut & rally (MAU&R) type of long set-up. So this is a simple trade - buy any move back up through the 50-dma and then use that as a tight selling guide. Note that GOOS did try to breakout back above the 50-dma on Friday, but stalled out and closed below the line. Sometimes MAU&R set-ups can take 2-3 attempts before they work, so one might have to be persistent. I think the basic issue here is that the 12.5 million secondary absorbed a lot of short-term demand for the stock, and it will take some time for that to get worked. One to keep on your IPO buy watch list as I see it. 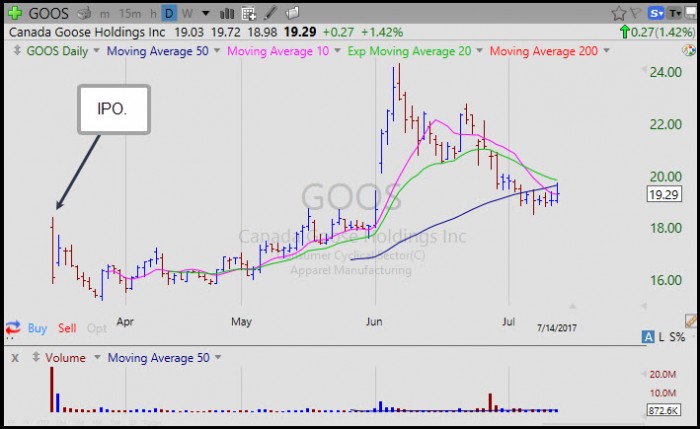 Cloudera (CLDR), which was beaten to a pulp after earnings, gapped down hard off the peak of a shallow post-IPO uptrend in the middle of June and has since been tracking sideways as it attempts to find its footing. Two weeks ago, just a little before I first mentioned it in a real-time VooDoo Report alert, the stock had just executed an undercut & rally U&R move after undercutting the prior mid-June low. It has since poked its head back above the 10-dma and then on Friday poked its little head back above the 20-dema. So far these have not occurred on any pocket pivot volume signatures, so right now the stock is still running on the U&R move of nine trading days ago on the chart. I'm watching for any confirmation in the way of a pocket pivot either off the 20-dema or off the 10-dma, perhaps in combination with a low-volume pullback to either moving average first. 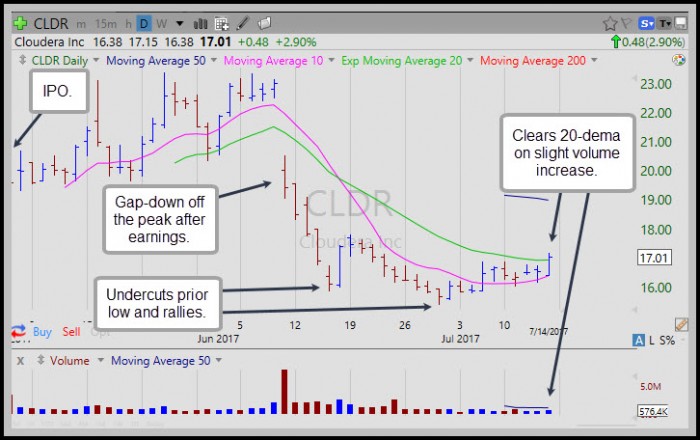 I mentioned ShiftPixy (PIXY) as a very interesting thematic play and a very fresh IPO in a prior real-time VooDoo Report alert,  The company is akin to an "Uber for Employers and Gig-Workers," and posted an IPO pocket pivot six trading days ago on the chart. At the time of my initial alert on the stock, it was pulling into the 9 price level, which is also the IPO pocket pivot point, as volume dried up sharply. The big reversal off the highs on Monday looked normal to me given tha the stock IPO's at $6 a share two weeks ago. By the time it was clearing the 11 price level on Monday morning, it was almost a double in six days for those who were able to get shares on the IPO. So it ran into some logical profit-taking, and the sharp volume dry-up on the ensuing pullback provided a nice entry. On Thursday PIXY pushed to a new closing high, and then nicely consolidated that on Friday as volume declined. I see this as buyable using the 9 price level as a selling guide. Hopefully some of you acted on this after my initial report on the stock on July 11th, which was Tuesday. 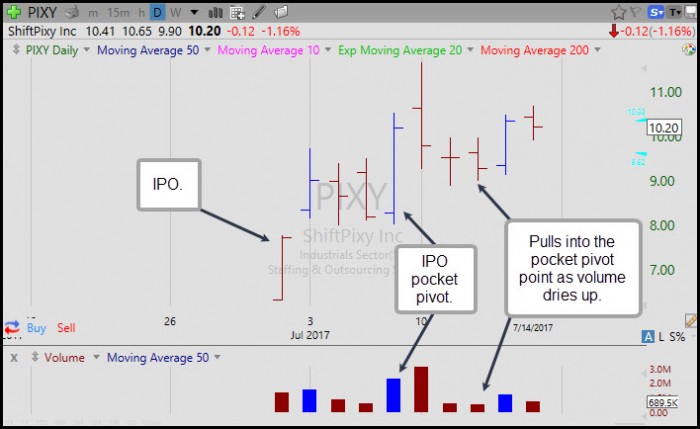 Myomo (MYO) is another interesting new IPO as a "commercial stage medical robotics" play. The stock had a big move after its IPO back in early June, more than doubling in just a few days. Since then it has run into some logical profit taking and is now building what may be the lows of its first IPO base. Arguing in favor of some roundabout type of action here are two roundabout pocket pivots this past week, one coming up through the 10-dma and the other coming up through the 20-dema. On Friday MYO pulled into the 10-dma/20-dema zone as volume dried up in the extreme, which in my view puts it in a buyable position here using the 10-dma as your tight selling guide. 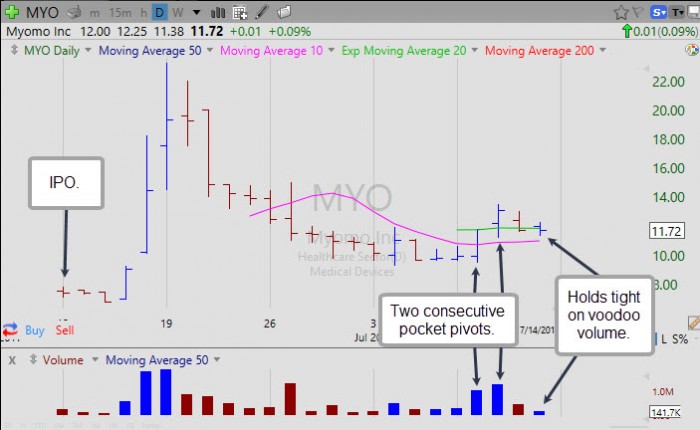 Okta (OKTA) is a recent IPO that is now about three months old. It is a player in the  cloud-based identity-security space, and started out well enough, even breaking out of a cup-with-handle pattern back in early June. But that breakout failed, and the stock recently undercut the lows of its prior cup-with-handle formation. That set up an undercut & rally move back up through that low seven trading days ago on the daily chart, and the stock is now engaged in a "Wyckoffian Retest" as it pulls into the 10-dma with volume drying up to -65% below average on Friday. I think this can be tested here using the 10-dma as a tight selling guide. 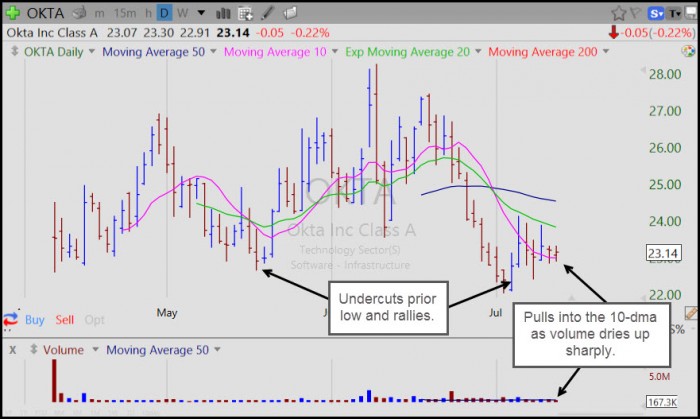 Our old friend Quantenna Communications (QTNA) has been quite indecisive as it shows strength on moves above the  three moving averages on its daily chart, the 10-dma, 20-dema, and 50-dma. This reminds me of other names that spend a considerable amount of time flitting back and forth along these three key moving averages, sort of like JD back in March and VEEV backin late March/early April. Now how volume is drying up sharply over the past few days on a "Wyckoffian Retest" of last week's lows. This may be getting set to move back up through the 50-dma, and I think its worth a shot here using the 10-dma as a selling guide. 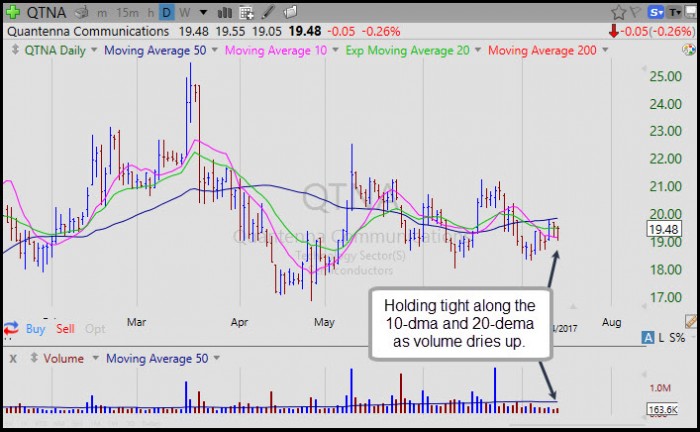 It has been something of a trademark for this market for IPOs to run up and then run down, looking as if they are on the verge of a serious demise. In many cases, however, these will recover and head strongly back to the upside after building an initial IPO base (there are exceptions of course, such as ACIA). Among these I would say PI, TTD, and APPN would qualify as examples. Some of these discussed in this VooDoo Report may have the same potential, and I believe that as long as one can keep risk to a minimum by using nearby moving averages in conjunction with roundabout and bottom-fishing pocket pivots, U&R long set-ups, and MAU&R long set-ups, one can take shots when the set-ups are there. If I can combined a compelling fundamental theme, even if the company is still showing losses, then so much the better.
This information is provided by MoKa Investors, LLC DBA Virtue of Selfish Investing (VoSI) is issued solely for informational purposes and does not constitute an offer to sell or a solicitation of an offer to buy securities. Information contained herein is based on sources which we believe to be reliable but is not guaranteed by us as being accurate and does not purport to be a complete statement or summary of available data. VoSI reports are intended to alert VoSI members to technical developments in certain securities that may or may not be actionable, only, and are not intended as recommendations. Past performance is not a guarantee, nor is it necessarily indicative, of future results. Opinions expressed herein are statements of our judgment as of the publication date and are subject to change without notice. Entities including but not limited to VoSI, its members, officers, directors, employees, customers, agents, and affiliates may have a position, long or short, in the securities referred to herein, and/or other related securities, and may increase or decrease such position or take a contra position. Additional information is available upon written request. This publication is for clients of Virtue of Selfish Investing. Reproduction without written permission is strictly prohibited and will be prosecuted to the full extent of the law. ©2022 MoKa Investors, LLC DBA Virtue of Selfish Investing. All rights reserved.
FOR OUR FREE MARKET LAB REPORT :