Since I first discussed buying Bitcoin via the Grayscale Bitcoin Trust (GBTC) on March 18th, the brand name crypto-currency has had a massive upside move that has been quite surprising in its persistence. Technically, we can see that the GBTC has never posted a technical violation of its 20-day exponential moving average all the way up, despite some serious volatility. Two closes below the 20-dema back in early June never resulted in a decisive move below the low of the first day that GBTC closed below the 20-dema, thus never qualified as a clear technical violation. That led to another fractal-parabolic move over the next three weeks that took the GBTC up to a peak of 17.40 before a correction of 31.09% set in over the past few days.

As Dr. K has noted in previous Crypto-Reports and in our live webinars, Bitcoin is subject to very rapid 20-30% corrections, and the latest one fits right in with this expectation. It is this kind of volatility that adds risk to the trade and certainly makes it difficult to hold on for the full ride. This latest correction briefly slid below the 20-dema on Tuesday before the GBTC turned back to the upside, closing positive and roughly 10% above the 20-dema. 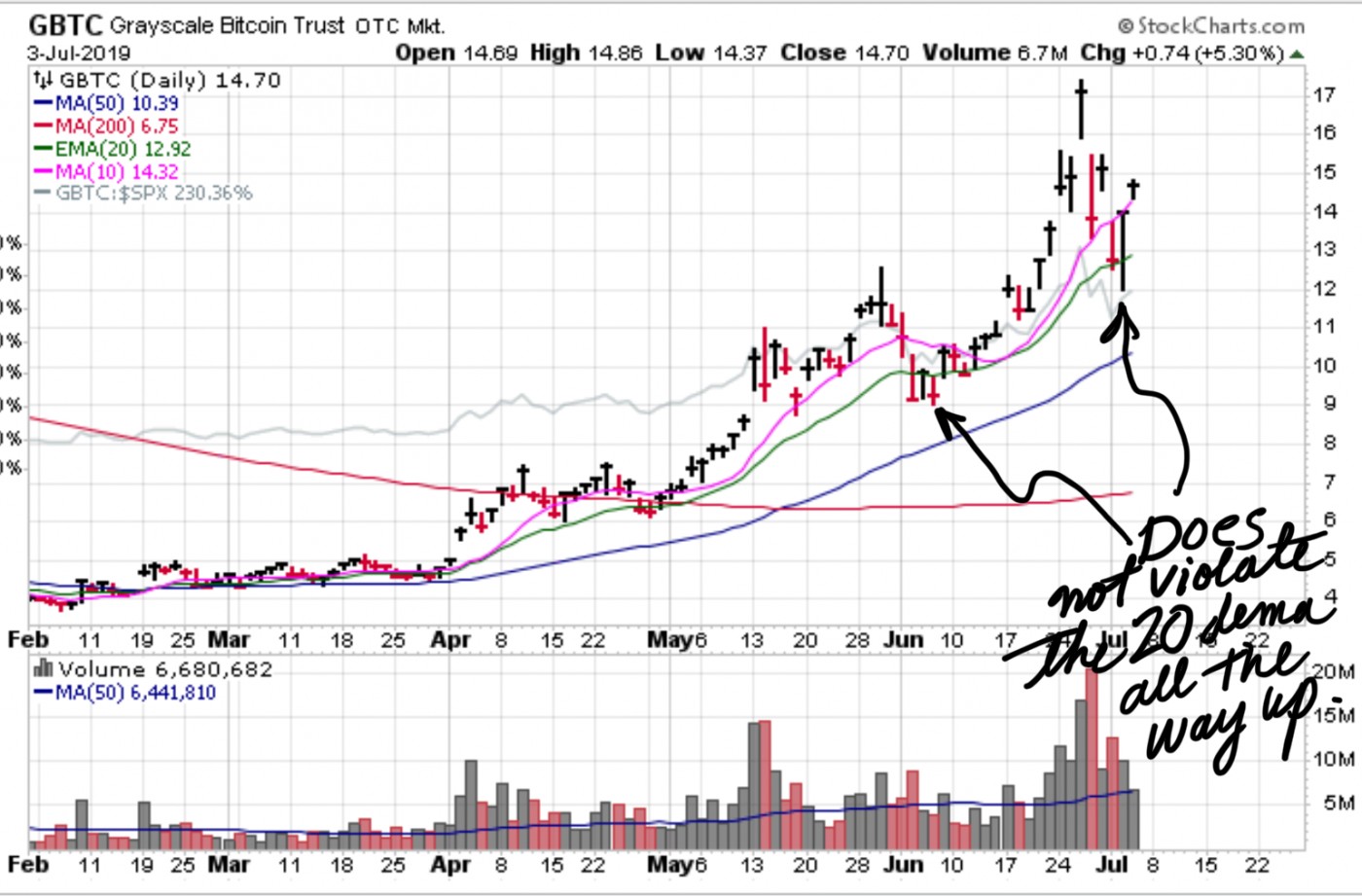 The $60 million question is certainly how far can this go? In my view, the move in Bitcoin is related to the move in gold and is driven by a “cash is trash” motivation whereby investors are seeking to move out of fiat currencies and into alternatives, either as a hedge or a direct investment. The fact that central banks around the globe are ready to initiate new waves of QE provides the impetus for such a movement out of fiat currencies and into alternatives like crypto-currencies and gold. The fact that Bitcoin has outperformed all the other crypto-currencies out there, including any variety of “shitcoins” that are traded at fractions of a penny, indicates that investors are seeking a “name brand” crypto-alternative to fiat currencies, as I see it. So, it could go a lot higher riding a new QE wave.
Note how gold has closely correlated to Bitcoin and the GBTC over the past three weeks, including the sharp pullback on Monday that came after an initial perception that U.S.-China trade tensions were easing, giving rise to knee-jerk profit-taking. But the moves in Bitcoin and gold are more than fear trades or save-haven moves. They are less related to the trade situation between the U.S. and China and likely more related to the current stance of global central banks. That is why, in my view, the sharp sell-offs on Monday, which were likely technical necessities given the extent and sharpness of the rises in both gold and Bitcoin as of late, quickly found support. In fact, gold closed on Wednesday at its highest closing high since the start of the move in late May. While Bitcoin started its move first, both it and gold are starting to correlate, and this adds weight to the argument that the moves are driven more by a general distaste for fiat currencies. 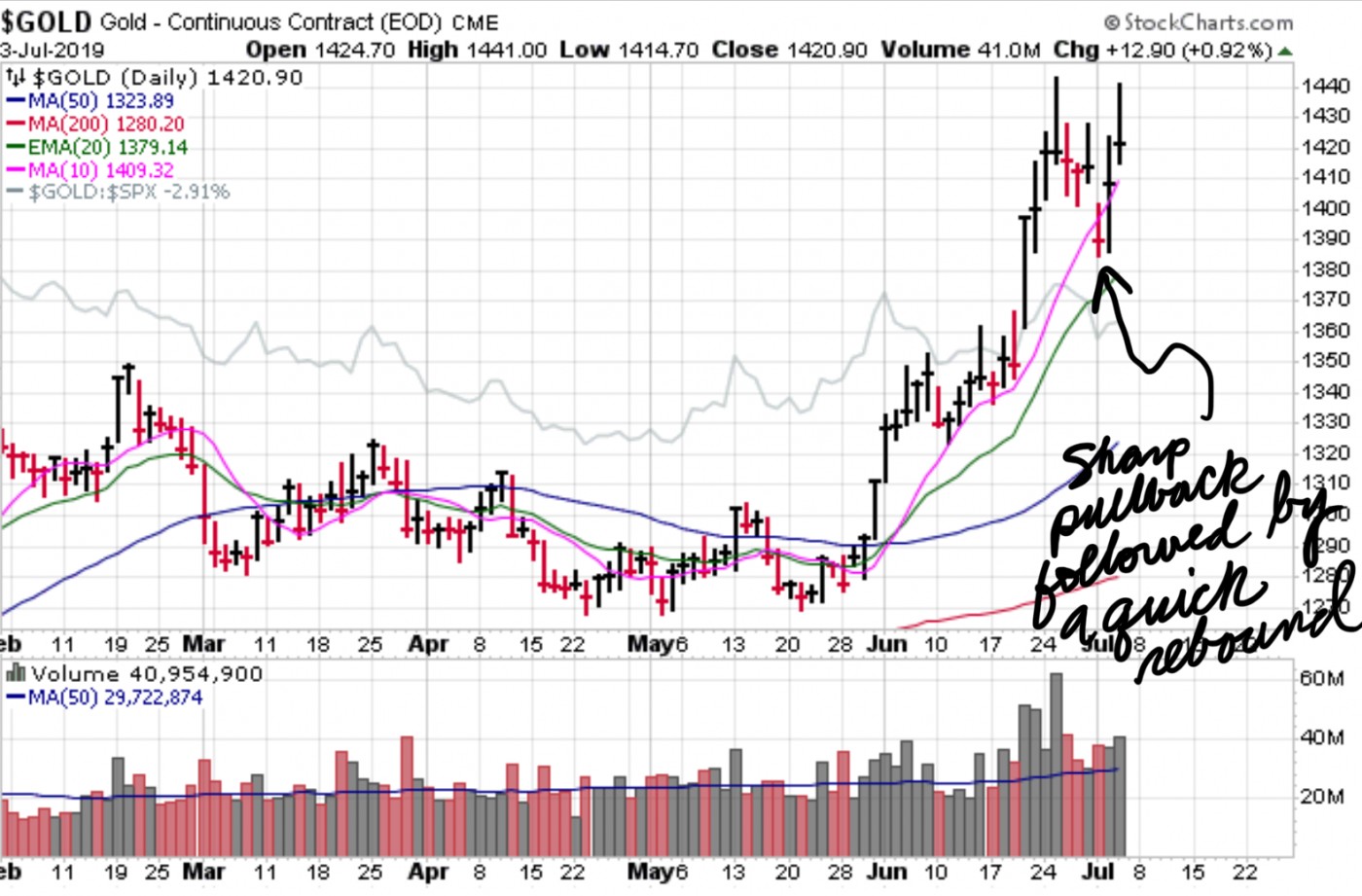 As long as this correlation holds up, then the alt-currency theory behind the gold and Bitcoin trades holds, in my view. Over the next few weeks and months, we’ll see exactly what actions central banks around the globe take. The Fed meeting this month has generated near certain expectations of at least a 1/4 point rate cut. Meanwhile, the ECB is flirting with moving deeper into negative interest rate territory. The Bank of Japan has held steady as of late, but they have been in a long-term state of QE and for all practical purposes remain there. And the bald-faced reality is that there is perhaps no better real-world example of the impotence of extreme monetary easing as a way of creating economic growth than Japan.
Meanwhile, the Chinese are also injecting additional liquidity into their financial system and doing so in newly creative ways. The People's Bank of China has created a new tool called the central bank bills swap (CBS) to beef up liquidity of the perpetual bonds issued by Chinese state banks. Analysts say this amounts to a form of quantitative easing, or, as we all know and love it, QE.
All this of course gets me wondering whether the “poor man’s gold,” silver will ever get moving here. The daily chart of the iShares Silver Trust (SLV) shows the white metal still in a dormant state. However, it may soon awaken from its slumber after posting two pocket pivots at the 50-dma over the past five trading days. What has worked against silver is its status as an industrial metal with many applications in electronics and elsewhere so that its price is tied to economic factors. This gives it a dual role as a a potential alt-currency and an industrial metal. 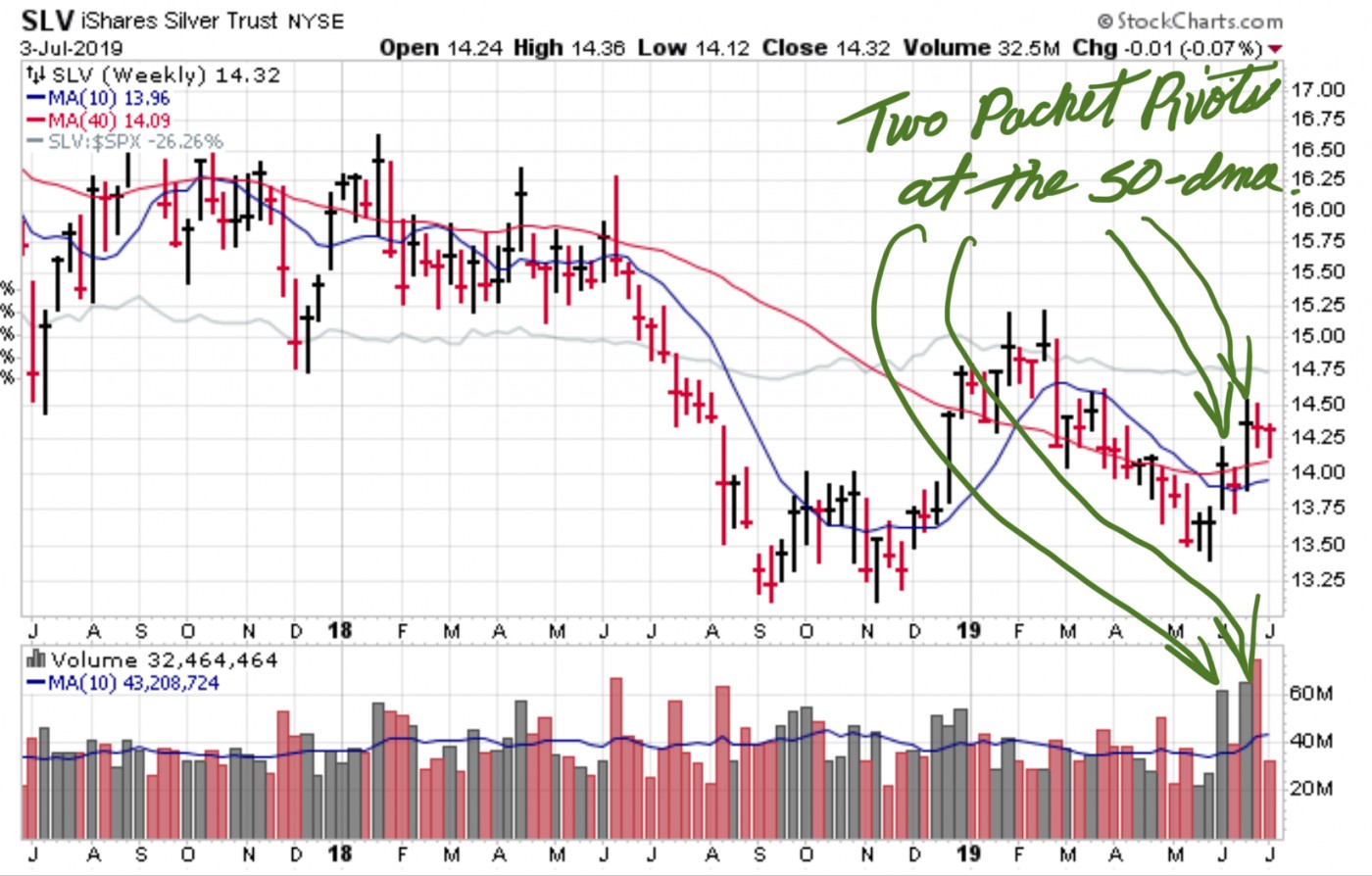 The question is whether silver’s status as an alt-currency will supersede its status as an economically-sensitive industrial metal. That is what happened back in late 2008 into early 2011 when the SLV ran from a low of 8.45 to a peak of 48.35. Can we see it again if central banks begin a new phase of QE? Food (and fireworks) for thought on your July 4th holiday.
This information is provided by MoKa Investors, LLC DBA Virtue of Selfish Investing (VoSI) is issued solely for informational purposes and does not constitute an offer to sell or a solicitation of an offer to buy securities. Information contained herein is based on sources which we believe to be reliable but is not guaranteed by us as being accurate and does not purport to be a complete statement or summary of available data. VoSI reports are intended to alert VoSI members to technical developments in certain securities that may or may not be actionable, only, and are not intended as recommendations. Past performance is not a guarantee, nor is it necessarily indicative, of future results. Opinions expressed herein are statements of our judgment as of the publication date and are subject to change without notice. Entities including but not limited to VoSI, its members, officers, directors, employees, customers, agents, and affiliates may have a position, long or short, in the securities referred to herein, and/or other related securities, and may increase or decrease such position or take a contra position. Additional information is available upon written request. This publication is for clients of Virtue of Selfish Investing. Reproduction without written permission is strictly prohibited and will be prosecuted to the full extent of the law. ©2023 MoKa Investors, LLC DBA Virtue of Selfish Investing. All rights reserved.
FOR OUR FREE MARKET LAB REPORT :