No Love for Bitcoin and the Demise of Crypto-Mania

There haven't been any VooDoo Reports in a while because, frankly, there hasn't been anything all that "offbeat." The market topped in early October last year and went straight down, finally bottoming at year-end. Just about every current leading stock turned off the Christmas Eve lows, many posting U&R long entry signals, and then rocketed higher from there. These days, the undercut & rally move, known by its acronym, U&R, is no longer an "offbeat" strategy. In fact, in this market, where breakouts hardly move and the sharpest upside moves occur off the lows and up the right sides of potential new bases long before the breakouts, a U&R is now a mainstream long set-up, at least from our perspective. Thus, it is regularly included in the conversations found in our other mainstream reports, like Pocket Pivot, Buyable Gap-Up, and the weekend Report Watch List & Market Review reports.

But, as I see it. There is no reason to spew out blather when you have nothing to say. Only one or two good ideas from the VooDoo Report make it worthwhile, in my view. Last year, names like Funko (FNKO) when it as first breaking out of a cup-with-handle at about 8.50 back in April, and Roku (ROKU) as it rounded off the lows at the 50-dma down around 35 back in May, were good enough.

Now, however, something that was ever-so-hot-to-trot over a year ago, is catching my offbeat attention. [Dr. K's comment: History often rhymes and bitcoin's price bubbles have been frequent, occurring in 2010, 2011, mid-2012, early 2013, late 2013, then again in late 2017. Each time the bubble has burst, bitcoin has been declared dead in the water. The media was rife with such stories in 2014 after the late 2013 bubble blew apart, sending bitcoin down -87% along with all other coins (Dash, Ripple, etc) which fell even further.]

For what it's worth, that would be Bitcoin. Bubble, bubble, toil and trouble, this thing has been on a deep-diving expedition back when the whole Bitcoin mania bubble popped, taking it and the stocks of Crypto-Mining, Crypto-Commerce, and Crypto-Everything Else shell companies down with it. At the time, I was thinking of changing my own name to Block Chain, or "B.C." for short. That would have made my net worth at least 20-30 times greater than it was at the time, no doubt, by sheer virtue of the name alone. [Dr. K's comment: This is no different from companies adding dot-com to their names in the late 90s. This would often cause the company to double in price overnight.]

In any case, something new and perhaps offbeat has come across my radar, and that is Bitcoin. I'm using the Greystone Bitcoin Trust (GBTC) to analyze this "Big-Crypto" phenomenon, since that is the purest expression of mainstream retail sentiment with respect to Bitcoin and other crypto-currencies. I understand that Bitcoin trades on its own, including futures, but an ETN like GBTC, is probably the most accessible vehicle for retail investors seeking to play moves in Bitcoin. That was certainly the case back in late October of 2017 when it posted a pocket pivot and then launched on a nearly five-fold run from there.

[Dr. K's comment: GBTC tends to over- and undershoot the actual price of bitcoin. This can be used to a trader's advantage. For example, from late Oct 2017 to its peak in mid-Dec 2017, it shot higher by 620%. Bitcoin, on the other hand, was higher by 244%. This obvious climax top in GBTC could have been sold into on the first sign of weakness which occurred on Dec 19, 2017. GBTC then promptly lost -67.2% of its value in 4 days from peak-to-trough:] 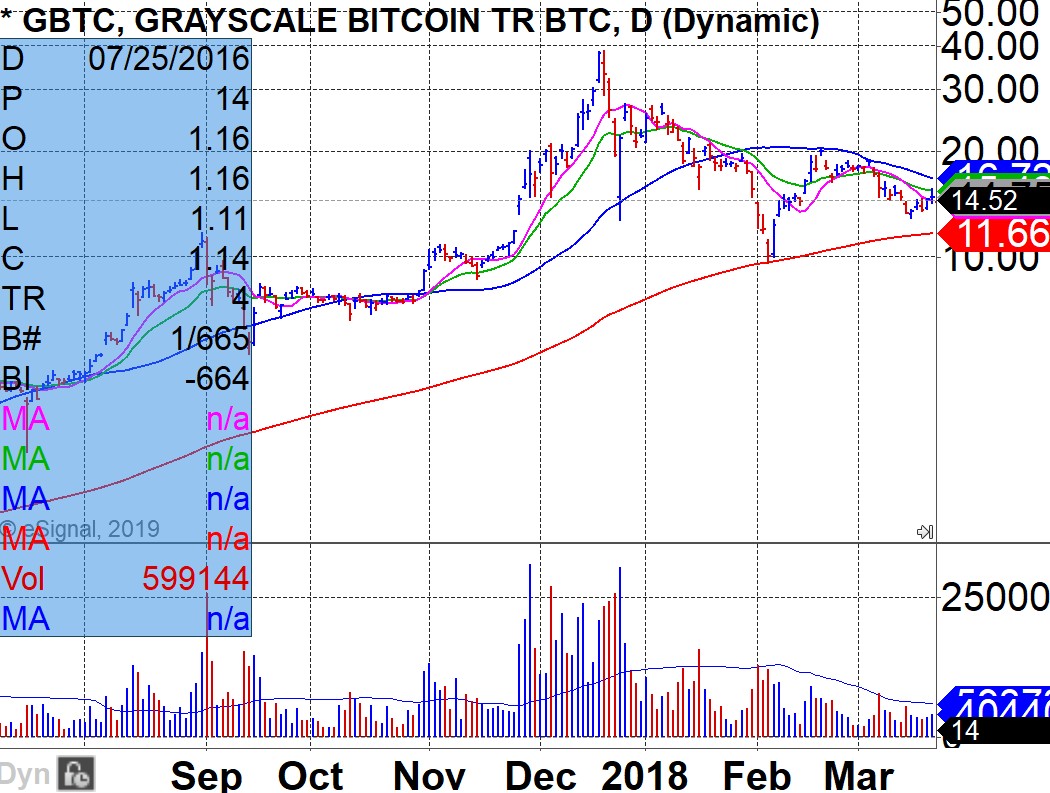 These days, nobody seems to care about Bitcoin and crypto-currencies as the flame of easy money has been snuffed out. A lot of late-comers who suddenly decided that "Bitcoin is real" in early 2018 got burned badly. But the signs of at least a short- to intermediate-term top were there, and there is no need at this point to review all of them. I've been watching Bitcoin and the GBTC move lower for the past year or so.

The question is whether we're nearing some sort of coherent bottom. The weekly chart of GBTC shows that it is now approaching the lows of the first base in a base-on-base formation it formed before going on its wild, speculative run to the upside. Notice also that it has been moving tight sideways for the past thee months, which it hasn't done all the way down. This may be a clue that we're reaching at least a tradeable low. 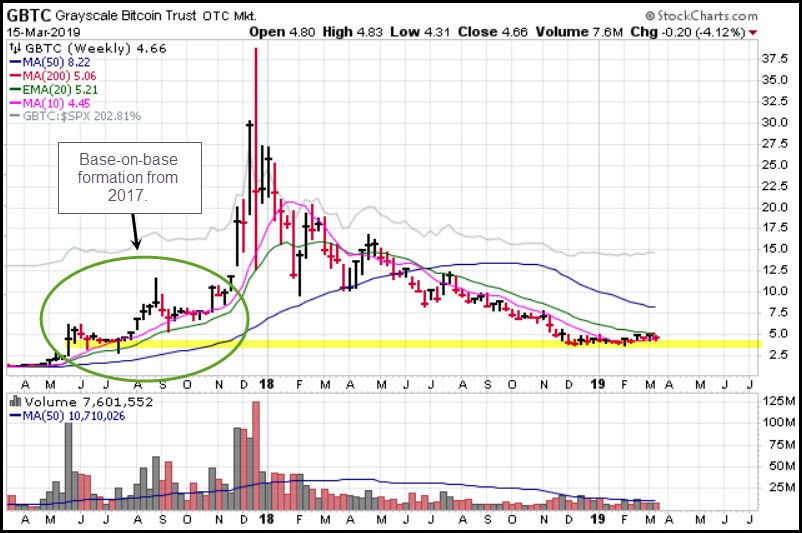 So, let's looks for some concrete evidence on the daily chart. Here we see a few things going on here. The first is the undercut & rally posted on February 7th when GBTC traded below the prior 3.76 low of December 14, 2018 and then rallied to close back above that low. Since then, it has posted three bottom-fishing pocket pivots (BFBGUs) and has held pullbacks to the 50-dma. My conclusion: If you're patient, this might be something to buy here with the idea of using the 50-dma as a selling guide. 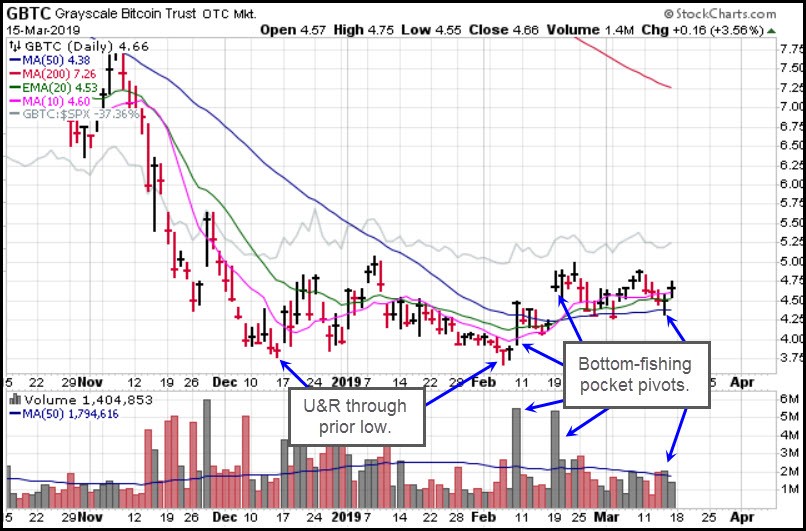 The actual price of bitcoin is showing more neutral chart action in that the number of higher volume up days is nearly matched to the number of higher volume down days. It is trying to stage a bounce since it fell to new lows in this cycle on December 15, 2018. That said, the GBTC chart above shows a possible 'short term' short or intermediate term trade as accumulation is evident using the 50-dma as suggested by Gil.

The question is whether this current bounce is another of the dead cat variety or whether the deep drop bitcoin suffered the last quarter of 2018 is the major bottom for this cryptowinter. The chart below shows numerous bounces this year in bitcoin: 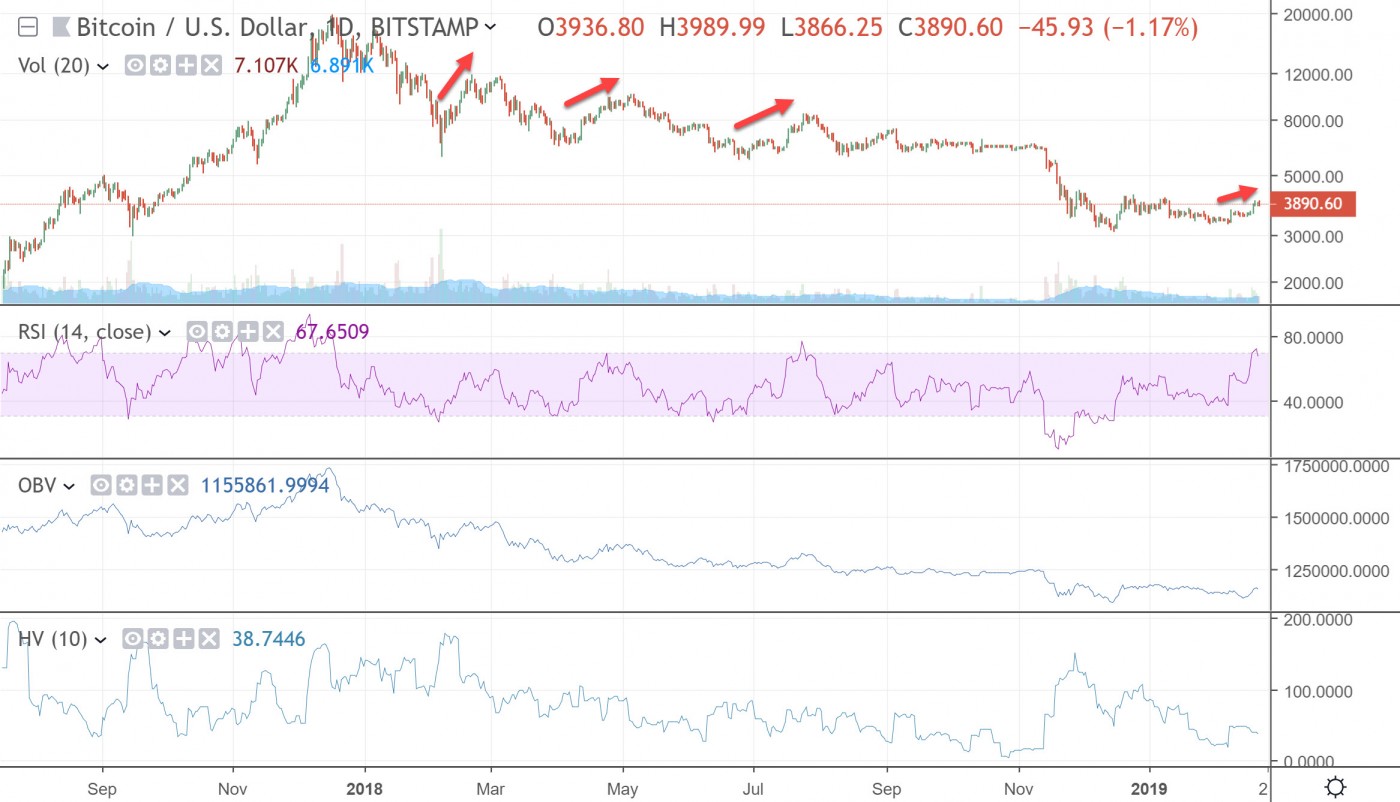 Since 2011, prior major bottoms in bitcoin coincided with major price/volume capitulation such as in January 2015. My algos have so far been able to call major tops and bottoms in bitcoin because traders largely consist of retail with little institutional trading to add noise to the charts. That of course does not guarantee they will continue to work since markets change and institutions are starting to add volume to the total trading volume, especially as regulations become more clear over the next year. 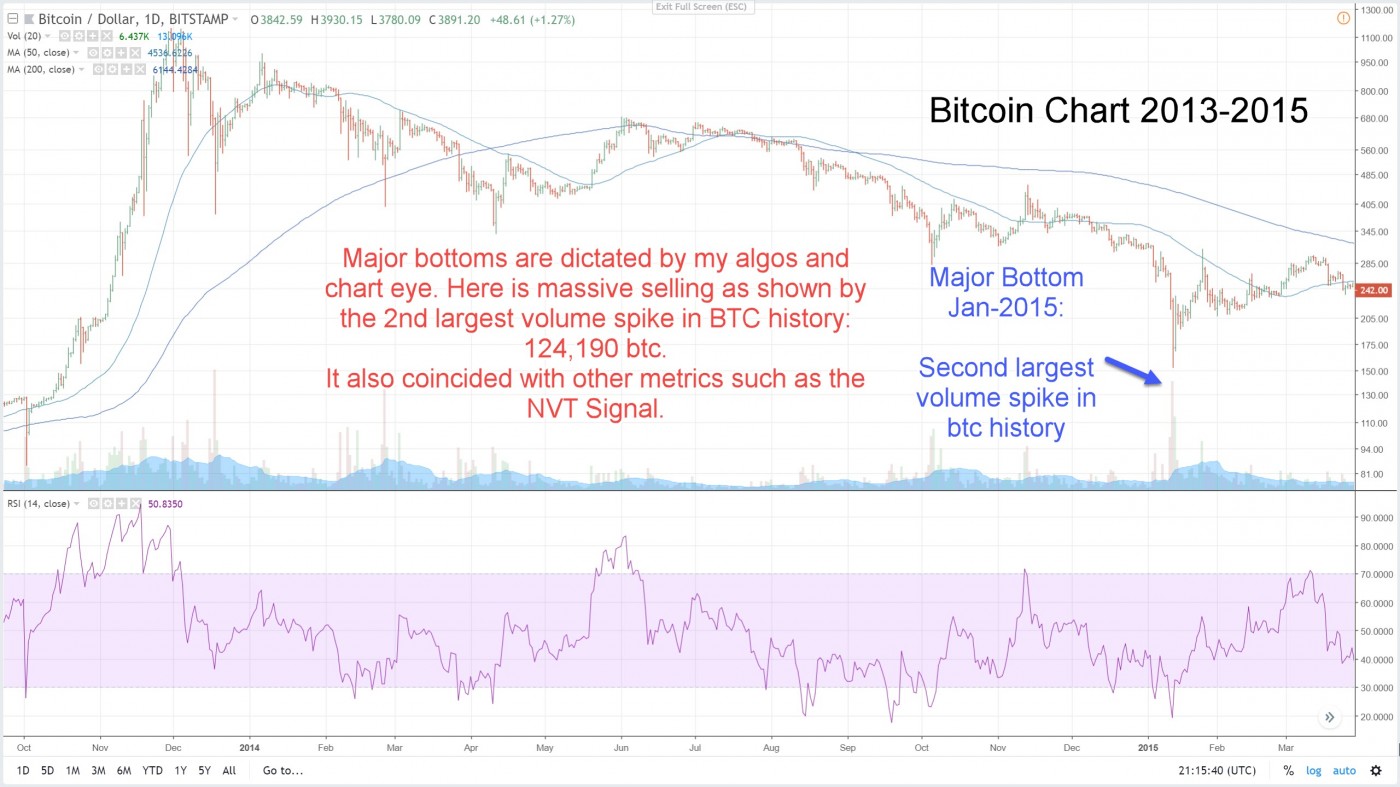 I (Dr K) will be posting a comprehensive set of charts in the comings days/weeks (as the bitcoin market dictates) that represent some of the metrics I use to see when bitcoin reaches a major bottom. Of course, a major catalyst such as the approval of a bitcoin ETF could signal the start of a major bull market which occurs before a major low in bitcoin is reached. That said, it is doubtful any such ETF approval will occur until much later in the year, at the earliest. This gives bitcoin time to find a major low with metrics such as the NVT Signal issuing a strong buy. At present, it still shows bitcoin is largely overvalued, thus may still need to undercut $3000:

But it is more likely bitcoin will meander higher as it has done after major bottoms such as in Jan-2015 for an intermediate to long term trade in GBTC. End of Dr. K comment.]
This information is provided by MoKa Investors, LLC DBA Virtue of Selfish Investing (VoSI) is issued solely for informational purposes and does not constitute an offer to sell or a solicitation of an offer to buy securities. Information contained herein is based on sources which we believe to be reliable but is not guaranteed by us as being accurate and does not purport to be a complete statement or summary of available data. VoSI reports are intended to alert VoSI members to technical developments in certain securities that may or may not be actionable, only, and are not intended as recommendations. Past performance is not a guarantee, nor is it necessarily indicative, of future results. Opinions expressed herein are statements of our judgment as of the publication date and are subject to change without notice. Entities including but not limited to VoSI, its members, officers, directors, employees, customers, agents, and affiliates may have a position, long or short, in the securities referred to herein, and/or other related securities, and may increase or decrease such position or take a contra position. Additional information is available upon written request. This publication is for clients of Virtue of Selfish Investing. Reproduction without written permission is strictly prohibited and will be prosecuted to the full extent of the law. ©2022 MoKa Investors, LLC DBA Virtue of Selfish Investing. All rights reserved.
FOR OUR FREE MARKET LAB REPORT :