Dr. K's Crypto-Corner
by Dr. Chris Kacher
Cryptotechnologies... Kryptonite for Governments™
If you remember the financial meltdown of 2008, there was a liquidity crisis that emerged. 2008 is considered by many economists to have been the most serious financial crisis since the Great Depression of the 1930s.

It began in 2007 with a crisis in the subprime mortgage market in the United States, and developed into a full-blown international banking crisis with the collapse of the investment bank Lehman Brothers in September 2008.

The U.S. is no stranger to such situations as a number of financial panics have struck over the last century. The panic of 1893, 1907, and of course the 1930s brought such extremities where even the great JP Morgan himself had to come in and save the banks.

Liquidity risk scales non-linearly with the amount of leverage in the financial system. Global debt is at an all-time high of roughly $250 trillion and debt-to-GDP is over 300% based on this Bloomberg aritcle: https://www.bloomberg.com/graphics/2018-lehman-debt/ 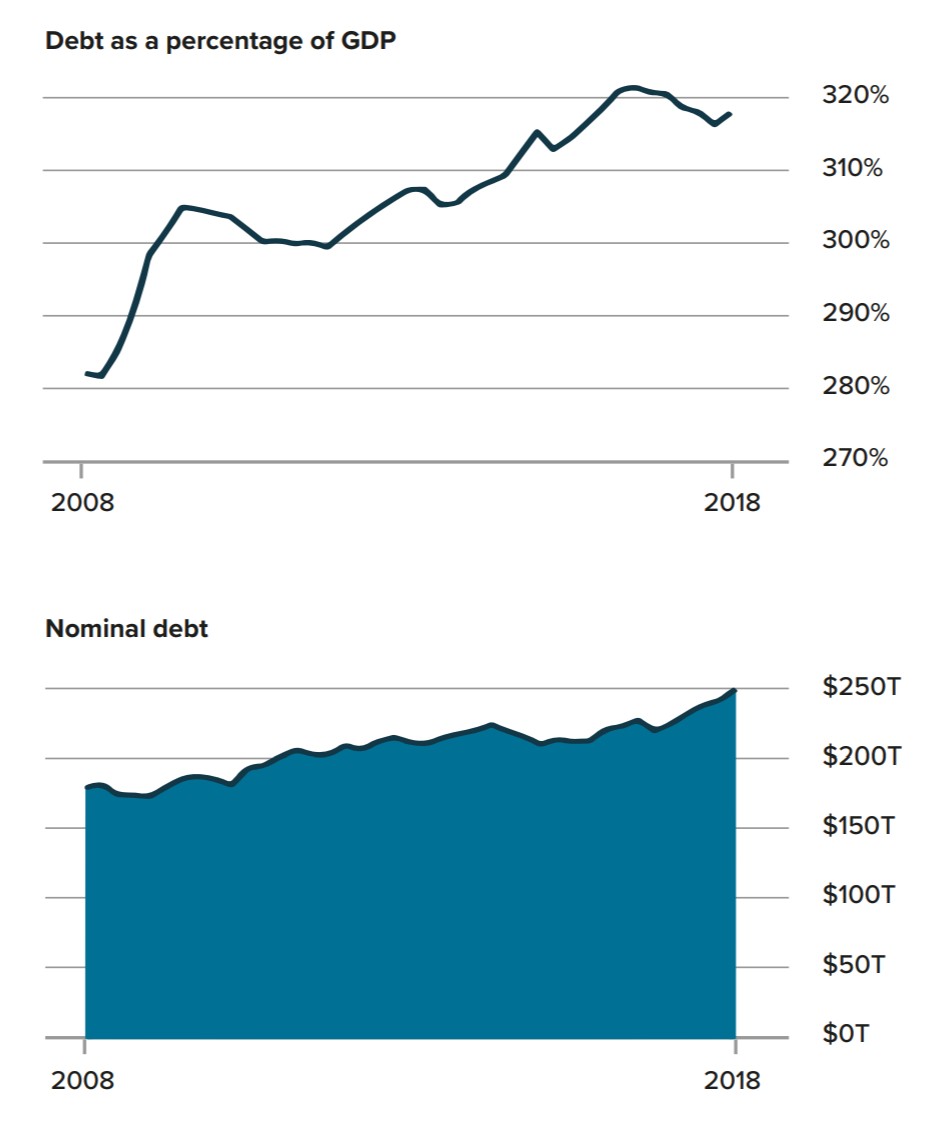 Meanwhile, the Fed's balance sheet while in a downtrend is most likely to start rising once again as the global economy remains more tenuous than ever given the trade wars and the nearly inverting yield curve. When, not if, the next crisis or recession materializes, QE will resume, by the end of which the Fed balance sheet will likely have DOUBLED to at least $8 trillion. The stock market being the ingenious discounting mechanism it has always been is already taking this into account. The QE-driven bull market paused in late 2018 when Fed Chair Powell continued to pursue his hawkish stance, but then quickly reversed his position by late December 2018 causing the market to put in a major low and rally sharply. Any unwinding of the Fed's balance sheet came to an end, and the next move will be the start of a fresh uptrend.

Indeed, investors haven't been this bearish on stocks since early-2009 when the world was in the throes of the financial crisis triggered by the Lehman Brothers collapse, Bank of America Merrill Lynch's June fund manager survey showed. Results of the monthly survey showed funds' allocation to global equities dropped by 32% from May to a net 21% underweight, the lowest allocation to stocks since March 2009 and the second-biggest one-month drop on record.

Bond allocations meanwhile jumped by 12 percentage points to the highest since September 2011, as dovish signals from all central banks triggered a U-turn in the market's interest rate outlook. The renowned portfolio manager Stan Druckenmiller moved most of his capital into bonds as he believes the U.S. Fed will have no choice but to lower rates to zero.

Over in Germany, its monthly survey showed economic sentiment among investors plunged to -21.1 from -2.1 in May, well below estimates of -5.9. The steep drop was linked to greater uncertainty about the global economy regarding the trade wars, military conflict in the Middle East, and a no-deal Brexit as well as a downturn in data on the German economy at the start of the second quarter.

As one example of a major central bank doing a U-turn on rates since December 2018, markets have already priced in 15-20 basis points of cuts in the ECB's -0.40% deposit rate - a big change compared to the start of the year, when rate hikes were firmly on the table.

Bitcoin (BTC) as a consequence has become the new fear trade, potentially in time supplanting gold which has generally been the standard go-to fear trade when things went awry. If we go back over the last few years, the price of bitcoin sharply rose whenever global issues emerged:

As an aside, the Chinese official who recently said not to sell the yuan because the government would maintain its strength and short sellers would be hung out to dry echoes what Chinese officials said in 2015 before they had no choice but to devalue their currency. Legendary investor Jim Rogers is probably short the yuan as I type.


$30 trillion in wealth is being passed down to the millenials from the baby-boomer generation. With under 40s mostly favoring bitcoin over gold, we have yet another major tailwind at hand in addition to the ones I've written about HERE.

QEInfinity provides a strong tailwind for stocks and bonds as well as bitcoin so recent market action of major averages heading higher comes as little surprise but leadership remains somewhat questionable.
Like what you read?
Let us help you make sense of these markets by signing up for our free Market Lab Reports:
This information is provided by MoKa Investors, LLC DBA Virtue of Selfish Investing (VoSI) is issued solely for informational purposes and does not constitute an offer to sell or a solicitation of an offer to buy securities. Information contained herein is based on sources which we believe to be reliable but is not guaranteed by us as being accurate and does not purport to be a complete statement or summary of available data. VoSI reports are intended to alert VoSI members to technical developments in certain securities that may or may not be actionable, only, and are not intended as recommendations. Past performance is not a guarantee, nor is it necessarily indicative, of future results. Opinions expressed herein are statements of our judgment as of the publication date and are subject to change without notice. Entities including but not limited to VoSI, its members, officers, directors, employees, customers, agents, and affiliates may have a position, long or short, in the securities referred to herein, and/or other related securities, and may increase or decrease such position or take a contra position. Additional information is available upon written request. This publication is for clients of Virtue of Selfish Investing. Reproduction without written permission is strictly prohibited and will be prosecuted to the full extent of the law. ©2022 MoKa Investors, LLC DBA Virtue of Selfish Investing. All rights reserved.
FOR OUR FREE MARKET LAB REPORT :