While we strive to help members profit in stocks, ETFs, ETNs, and other vehicles, I have had a number of questions put to me on other platforms about what to do about money sitting in savings accounts or other vehicles such as certificates of deposit that is not invested in stocks. Given that yields are at or near all-time lows and presumably heading lower, we are undergoing a paradigm shift as detailed in some of my prior reports. Ray Dalio of Bridgewater has also discussed this in detail in his recent publications.

History is no stranger to banking and financial sector crises. Tens of millions of people around the globe lost their jobs or their homes as a result of the 2008 financial crisis. Blockchain technology enables less reliance on centralized institutions, thus can help build a more resilient financial sector. Centralized intermediaries, ie the “middle men”, concentrate risks while collecting significant economic rents. Current methods for clearing and settling transactions remain costly with many reconciliation and counterparty risks.

One study showed for the top ten banks alone, blockchain infrastructure could reduce costs by 30%, translating into savings of between $8 and $12 billion. Of course, such infrastructure could be applied to all institutions within the financial system. This savings, however, does not account for additional savings from opportunity cost. Capital gets locked up from typically two days to a week, depending on the asset class, until the trades are settled.

The reliability of blockchain technology enables fractional ownership via a highly efficient distribution of value while greatly enhancing liquidity in what has traditionally been a fairly illiquid market. In the case of real estate, multiple investors can own a piece of real estate, some land, an apartment, or an entire apartment complex. Of course, this analogy can be extended to hard assets of all types.

Blockchain provides a solid foundation where a far more efficient capital employs real banks, real attorneys, and real accountants all working together on a far more efficient platform. Indeed, a recently published paper from MIT, “The Impact of Blockchain Technology on Finance: A Catalyst for Change” recently stated, “Many financial services-related blockchain or DLT [distributed ledger technology] projects are justified on the basis of cost savings and efficiency gains.”

In a recent article, Ray Dalio of Bridgewater, the world’s largest hedge fund, asked what options there are for investors in this Era of QE. Companies that tokenize assets bring a key alternative to the market by allowing retail money to invest in formerly illiquid areas in the form of liquid, tradeable, tokenized assets such as real estate while reducing or eliminating many front and back end costs as well as increasing efficiencies. Such tokenized assets are in formation as I type but regulations must catch up to the technology of tokenization.

Even renowned Wall Streeters such as Dalio may not have a deep understanding of how hard assets can be tokenized by way of vehicles such as STOs, an acronym for security tokens but are actually tokenized securities, and why they will be in such demand in this era of currency debasement. Dalio makes no mention of such a possibility in what he has published.

The value of an STO will be determined by its underlying hard asset whether it is real estate, gold, a stock, a collectible, and so on. The ex-CEO of NASDAQ said all stocks will be tokenized in 5 years. Given that stocks are valued at around $70 trillion, this is a material transformation. We also have $228 trillion in real estate, some of which will be tokenized. Furthermore, the number of far more efficient and cost-effective decentralized blockchain-based technologies that are coming online will displace the conventional ones because of the economic advantage. So the blockchain space which currently has a total valuation of around $200 billion is looking at an exponential rise in value in the coming years. This bodes well for vehicles such as bitcoin and ethereum. Both trade as ETNs under the symbols GBTC and ETHE. Utilizing logical buy and sell principles detailed in our books and articles on Selfish Investing have so far worked well as we were one of the first if not the first to issue a buy signal on GBTC on March 1, 2019 when sentiment was still bearish then a more comprehensive report was sent to members on March 24, 2019.

Regulations must hurry up so exchanges can list tokens which will open doors to retailers whose savings are no longer safe especially in countries with near zero or negative yielding accounts as accelerating levels of QE lowers the value of all fiat currencies against hard assets.

In a recent piece, I wrote about four possible scenarios, at least one of which is likely to materialize. Only one of the four scenarios do exponential technologies soften the next recession and enable central banks to start shrinking their bloated balance sheets. In the other three scenarios, gold, silver, real estate, and bitcoin remain in an overall bull market as the global money printing machine rages on. In this world of fiat debasement, traditional and tokenized hard assets are the beneficiaries. That said, tokenized hard assets whose underlying value is tied to the hard asset such as real estate would represent solid reward with minimal volatility. The underlying asset can reap capital gains and yields as the asset price increases spurred on by the debasement of fiat.

Once these vehicles become available, conservative investors and savers will find solace in the availability of such tokenized securities as a superior alternative to near zero to negative yielding bonds and savings accounts. But in the meantime, profitable opportunities remain in precious metals, bitcoin, stocks and real estate. The current bull market is the longest on record at 10.7 years. The second longest bull market lasted exactly 8.0 years in the 1920s preceding the great cash of 1929.

A paradigm shift is occurring. The renowned angel investor Naval Ravikant would agree and Dalio has written about it. Ravikant said 2 years ago that 90% of jobs on Wall Street in their current form will be gone in 7 years. Transform or die. Survive and thrive.

I have had some questions on whether the current correction in bitcoin is different than prior corrections. Indeed, bitcoin typically corrects between -28% and -42% during bull markets. Such a correction looks minuscule in the context of bitcoin's overall price chart. The current correction of -53% is no different. Such came about due to a confluence of events, namely the recent Chinese crackdown on crypto exchanges, U.S. investors selling bitcoin in order to record negative performance for their end-of-year tax obligations, and the raid on Binance offices in Hong Kong which proved false but still contributed to the negative sentiment.  There are also companies putting out digital gold backed by gold which could take some market share from bitcoin. But gold can still be controlled by governments just as the U.S. once did in 1935 when they made it illegal to hold physical gold. Bitcoin, on the other hand, can be masked, much as the transactions of private coins such as Monero and Zcash can be hidden.

On the bullish front, $6500 level represents the assumed cut-off point for miner profitability which miners would defend. So far, this level has held up as the low in bitcoin hit $6515 on Nov 25 then bounced on appreciable volume. 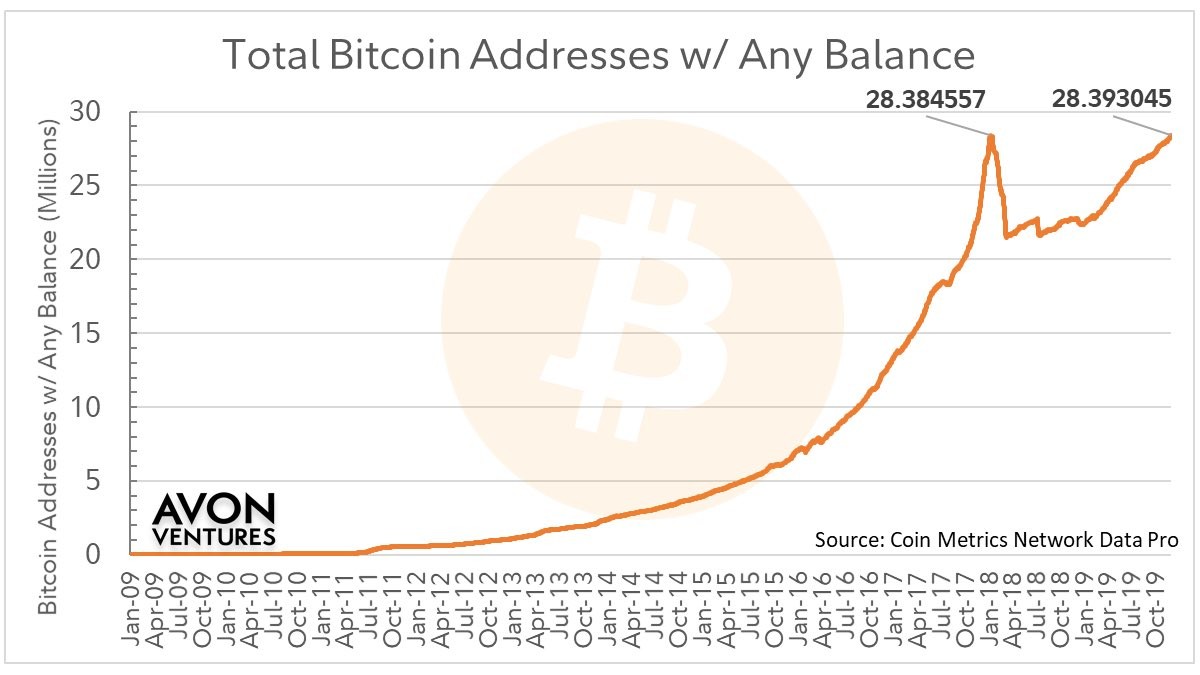 Also, the number of bitcoin addresses holding more than 1000 bitcoin is in a sharp uptrend not seen since 2013. Of course, the value of bitcoin is two to three orders of magnitude higher than it was in 2013 which suggests it's not the cypherpunks buying it as they were back in those early years but it is primarily the institutions and high net worth individuals that are buying bitcoin. Barry Silbert mentioned how more than 70% of its bitcoin buyers are now institutional. While much of this institutional money is from small crypto hedge funds, it is nevertheless institutional, akin to small and micro cap mutual and hedge funds that invest in stocks. The tidal wave of institutional capital that will enter the blockchain space will help push its overall value into the trillions in the coming years. 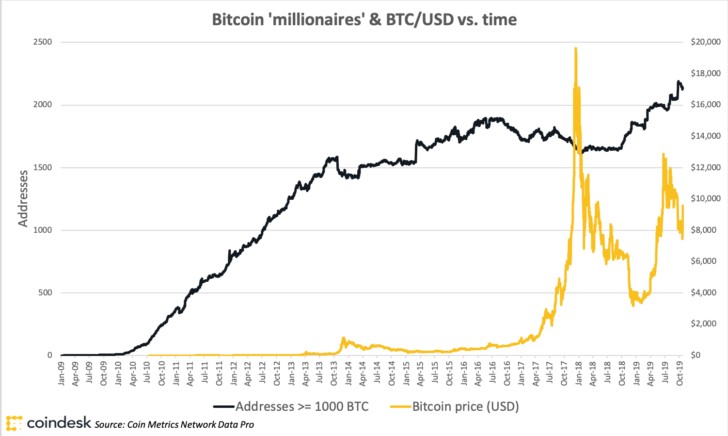 Finally, we have the bitcoin VWAP ratio which underscores how the recent pullback to $6515 should be the low for this current downtrend in the context of the bitcoin bull market. VWAP stands for volume weighted average price the market paid for their coins. During bull markets, when bitcoin has undercut this line, it tends to bounce back above it. Keep in mind the data set is limited to draw any firm conclusions. But if bitcoin drops appreciably below its low of $6515, it would suggest the bitcoin VWAP ratio is behaving differently compared to prior bull markets. It would also mean the miners were unable to defend the $6500 price. Thus at current price levels, bitcoin sits at a tipping point. Stay tuned. 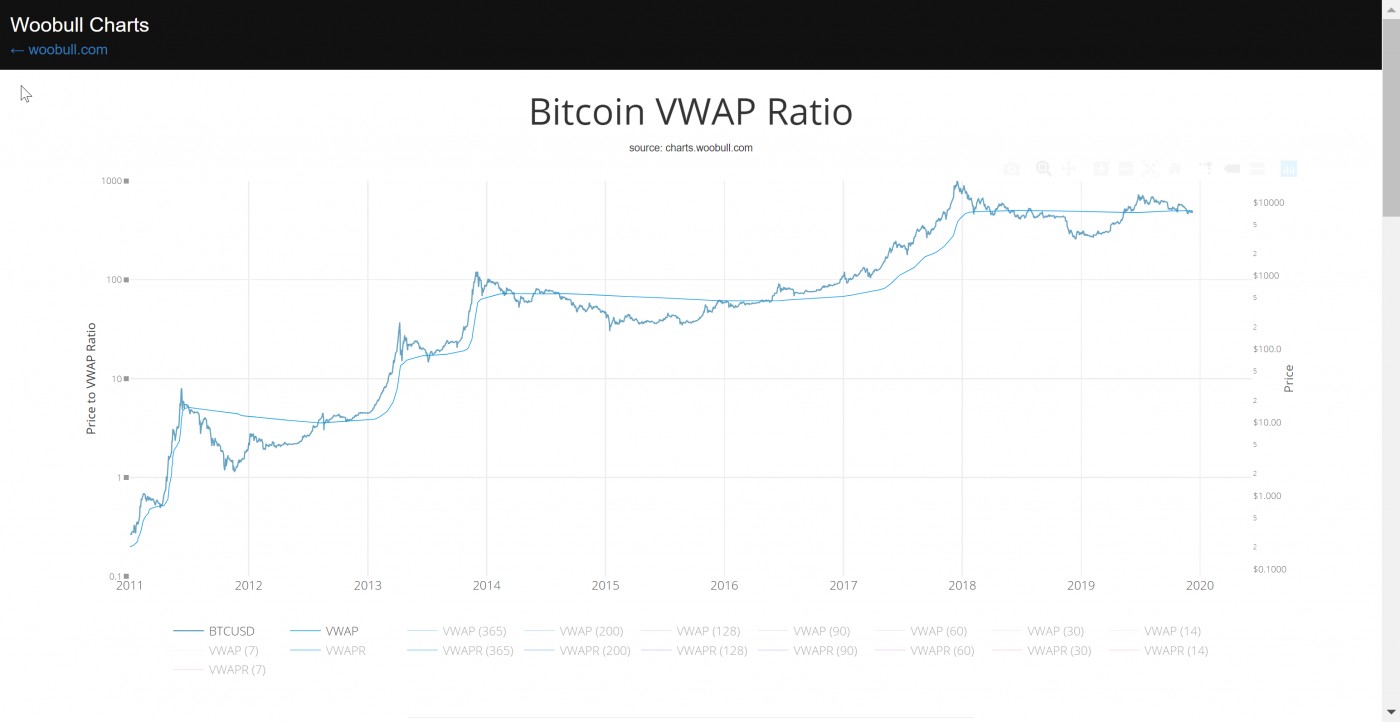