The Metaversal Evolution Will Not Be Centralized™
Universal Basic Income?

I get a number of questions such as this one about whether blockchain can structure a government to minimize hardship for the many. Some are more born of leftist thought than others.

Q: I certainly see that crypto and decentralization is a viable alternative to standard markets, and especially if you have something marketable. It feels like a good way for people to get better ROI for their talents.

But what about government structure? I'm worried that we are creating an "America" of markets where people get full control over their chances, but there will be a lot of people falling through the cracks (casinos, lottery, etc) being a very salient example where people bet or spend more than they can.

I suppose what I am proposing is that we need to build a safety net, perhaps universal income, but also be very clear which services and principles need collaborative governance. I strongly doubt that crypto can solve the climate crisis or pollution.

A: History shows that the pure form of capitalism is the ability to make money, save it, and put it into capital. It is an effective motivator of people and allocator of resources that raises people’s living standards. That said, capitalism gets distorted by centralized power structures which include governments, corporations, and HNWIs (the "150" as discussed by billionaire Chamath Palihapitiya) which are the drivers. In this distorted form, it leads to opportunity gaps that are unfair, can be counterproductive, drives populism, and thus can be economically and socially destabilizing.

Crypto via AI/blockchain technologies stands the best chance at engineering a capitalist economic system that raises productivity and living standards while diminishing inequities and instabilities. Some of the smartest minds are fast at work developing such systems. Crypto/blockchain/AI growth is beyond exponential, government regulations and interventions notwithstanding, so people tend to underestimate the speed at which it evolves.

Governmental intervention has often been poison if history viewed at 50,000 ft is any guide. Give them an inch, they can take a generation, either via catastrophic collapse, war, or genocide. The planet is moving swiftly towards an authoritarian state. Terrorism, 9/11, and most recently C19 have been the accelerants. The existential threats are dictatorships. This is why crypto is more important than ever. Satoshi's motivation behind blockchain details this in the Bitcoin white paper, and is arguably the most important invention of humankind.

On the climate crisis et al, crises have always been addressed by human invention. As things get worse, not from the biased mainstream media's perspective #badscience but from the proper interpretation of data, human beings rise to the cause. They are incredibly inventive. That said, we need to galactically decentralize. Having all our human eggs in one basket #earth is the greatest centralized threat to our species. #nuclearwar

Crises have never stopped the media from getting the facts horribly wrong. The internet in the 1990s then bitcoin this past decade are two of many such examples. Drugs, sex, religion, and ideologies have been weaponized via mainstream media to stoke fear over rationality. The "one death is too many" chanted by leftists regarding C19 all fail to see the devastating multiple order effects which have caused far more deaths and destruction. Crypto due to its towering efficiencies will contribute positively to many platforms including climate issues.

Michael Saylor of Microstrategy has had much to say on this matter. Here are two articles, the first of which includes his brilliant contributions: https://www.virtueofselfishinvesting.com/reports/view/market-lab-report-bitcoins-energy-usage-qed

MSTR should do well as a stock which is becoming more of a bitcoin stock as its holdings continue to increase. With the crypto bull market still well alive, bitcoin should reach a price well into 6-figures so the price of MSTR should also correlate. Here is an informative interview on Michael Saylor's strategy on bitcoin.

As for UBI, it is essential but not in the conventional way that often leads to the welfare state. I discuss it here (last section): https://www.virtueofselfishinvesting.com/reports/view/market-lab-report-qe-6-trillion-in-spending-fuels-qendless-bitcoin-stocks-bonds-real-estate

This will increase GDP as well as economic stability as the wealth gap is narrowed by virtue of more people across the spectrum contributing to growth. But nothing will change unless the systemic issues are met head on, so this piece will hopefully serve to spur others into action who are connected to government at local, state, and federal levels to create the necessary changes that will facilitate this form of “UBI”.

Over in the land of QEvermore, the money supply is up 40% since April-2020, the S&P 500 is up roughly the same 40%, and the increase in household wealth is also up about 40%. While some say you cant make this stuff up, no surprise here. QE creates strong correlations. But QE weakens fiat so while wealth has increased, buying power has dropped. Money printing causes inflation and causes everything to go up. But if you plot the S&P 500 (green below) against the S&P 500 divided by M3 (red below) which is all the money supply in the U.S., we are way off the all-time highs of 1999. So while the bare numbers suggest the major stock market averages are at all-time highs, they are actually far from highs due to tidal waves of money printing which have accelerated. On a comparative purchasing power basis, the stock market is worth much less than it was in 1999. The real rate of inflation is at least 15% so if your stocks aren't making at least that much, you're losing. Debasement is a bitch. 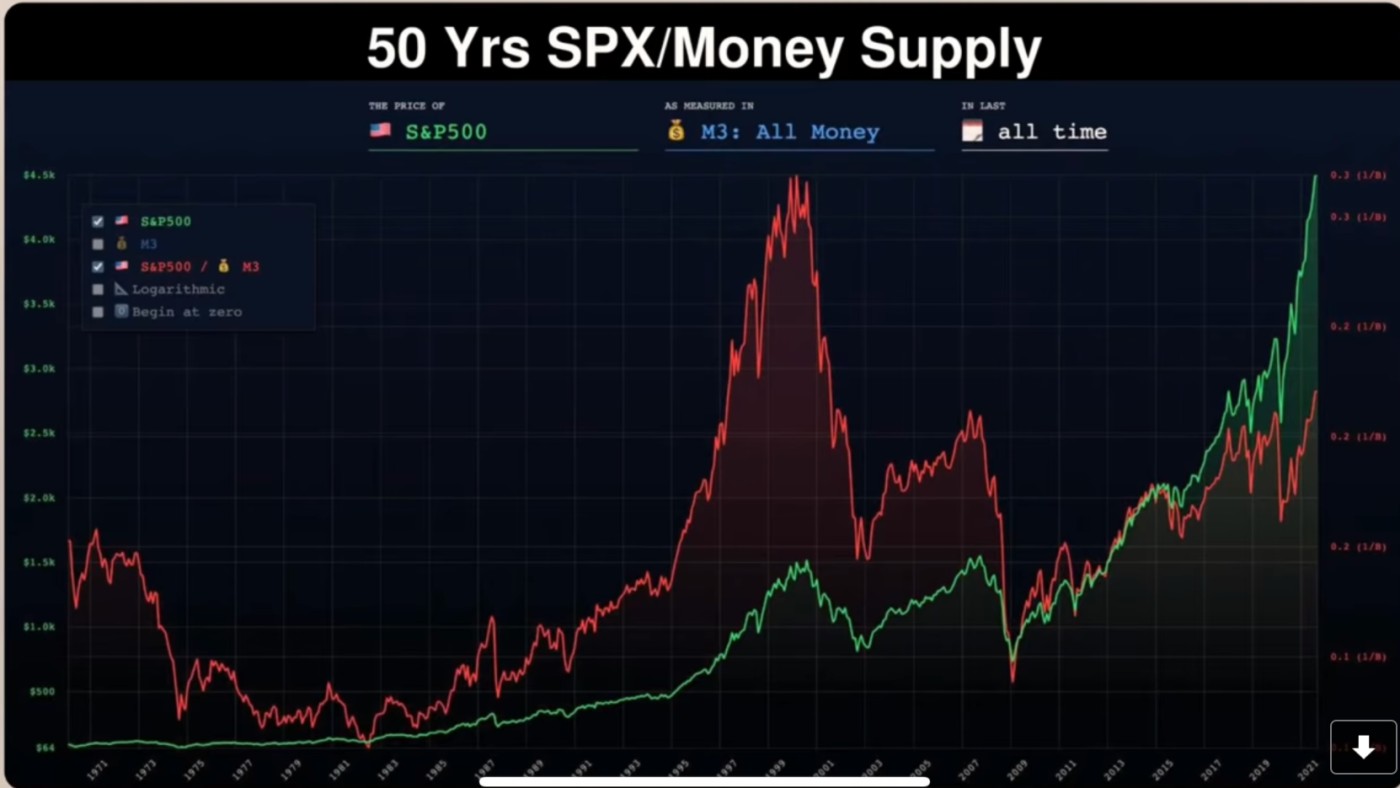 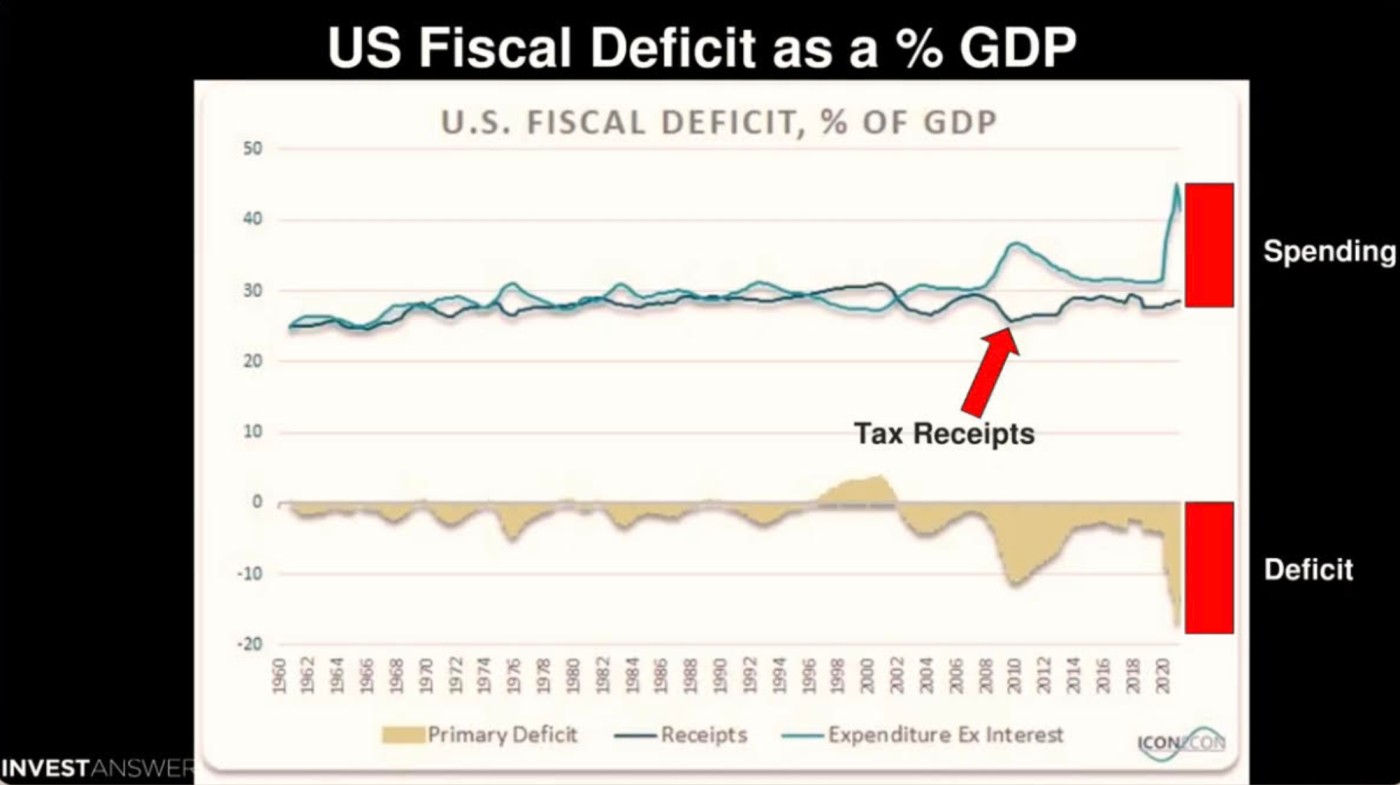