Market Lab Report - How this time is and is not different

This time is NOT different re: earnings
Earnings have never gone higher during a recession. We know a deep recession is a given. Yet analysts in Wall St are paid to show rosy pictures on companies. The image shows the massively bullish estimates of these analysts out to 2024 and reminds me of 2000-2002 when Wall Street analysts from Goldman Sachs, Morgan Stanley, and others all kept trying to justify why a major low had been reached in various dot-com companies. Meanwhile, the tech-heavy NASDAQ Composite lost -78% from peak-to-trough, its worst correction in its history. 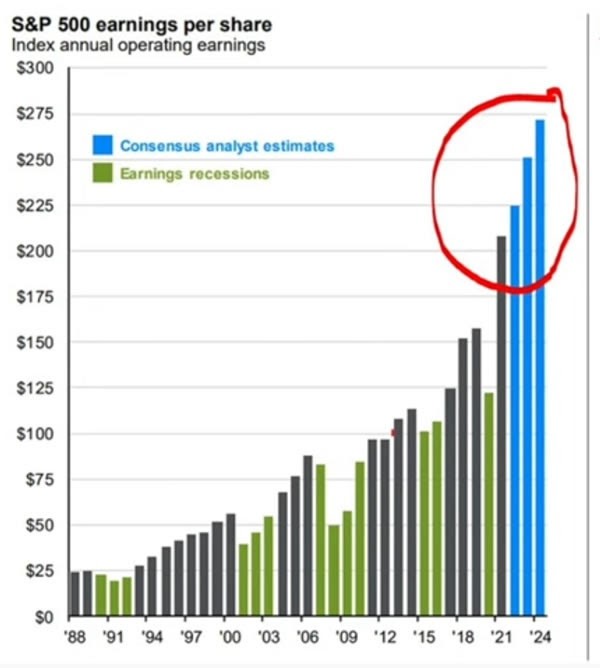 This time is different re: long end of the yield curve

The Fed also never manipulated the long end of the yield curve by buying bonds until COVID in 2000 when they bought $6 trillion in mortgage bonds. This is a Ponzi scheme induced real estate bubble whose ramifications are now being felt. The Fed is likely to continue to execute their yield curve control later this year by buying bonds on the long end, thus suppressing yields on the 10-year and longer as a strong dollar makes repayment of debt owned to the U.S. far more difficult. Higher yields also greatly hamper U.S. GDP.

Further, whenever the Fed has tried to shrink their balance sheet, they can only do so for a limited time before the market forces more QE. Given record levels of debt due to C19 and its higher order effects, they will only be able to hike interest rates maybe two more times. CME Fed Futures is pricing in two 75 bps rate hikes at their next 2 meetings. This would bring the FFR to 300-325 bps.

We have a number of important reports on the way. Watch for clues on the earnings front. AAPL just said they will stop hiring until economic uncertainties clear. AAPL is a company that is always looking to expand their empire so this announcement carries massive weight across the tech space.

Given how many potential landmines lie ahead of us, this bounce in both stocks and cryptocurrencies is likely of the dead bat variety. 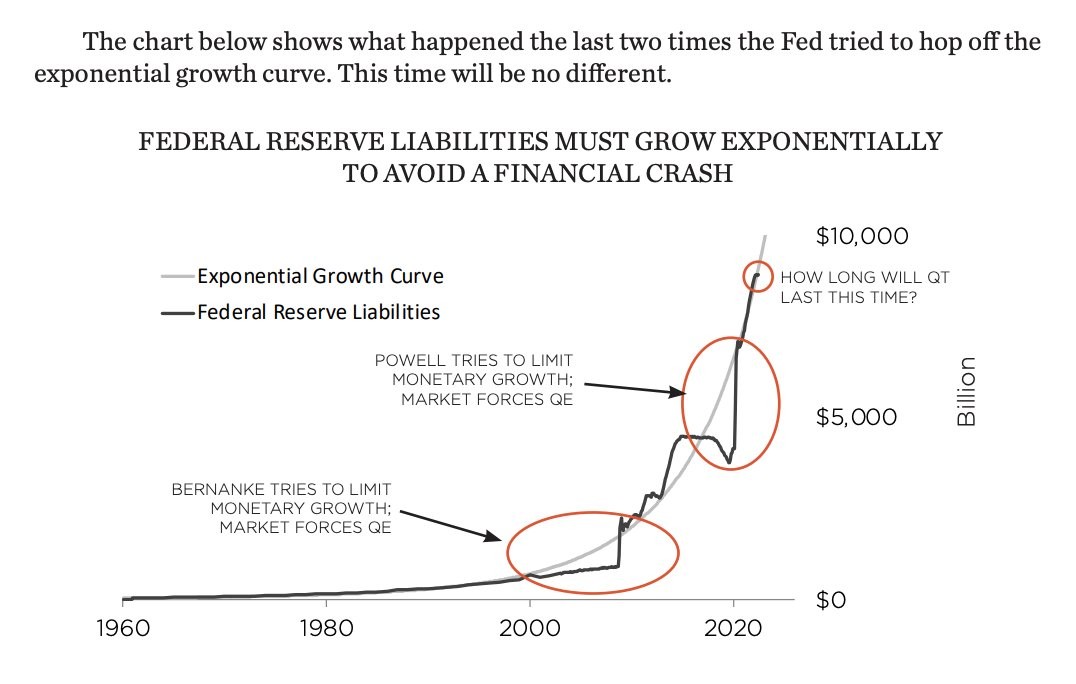 You can also see how the YoY valuations of Bitcoin are highly dependent on global M2. Bitcoin's market cap on a YoY basis topped in Feb-21 when central banks around the world started to tighten. On this basis alone, Bitcoin's $69k high on Nov 10, 2021 was highly suspect as central bank tightening intensified. 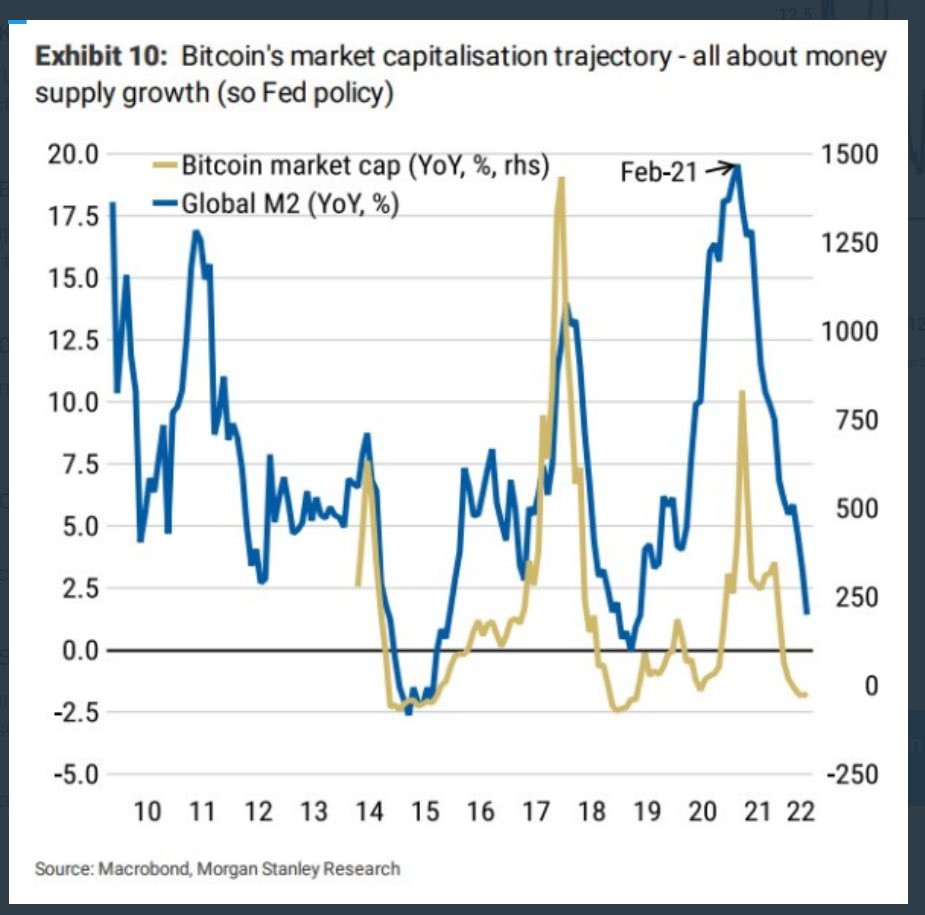 The first signs Powell was moving from dovish to hawkish came in Nov-2021 when he removed the word "transitory" on inflation. This prompted VSI reports HERE and HERE among other reports from VSI which helped our following move safely to the sidelines or profit from the earliest stages of the bear market via the Market Direction Model or by way of shorting stocks.

Dead bat bounces can be fierce such as in 2018 when Ethereum had a couple bounces exceeding 50% despite still correcting -95% in 2018. The recent parade of horribles including the 9.1% CPI and elevated core CPI ahead of expectations caused a pile of shorts to load up. While a hot CPI in June caused the markets to flush and Ethereum to plummet nearly -50% over the next 9 days after the CPI on June 10 was reported, July's CPI report likely resulted in a short squeeze due to seller's exhaustion along with shorts piling in. Part of the bounce is also based on the hope that inflation has peaked which would give the Fed room to "only" hike by 75 bps when they conclude on July 27. That said, expect at least one more major downleg before the bear market finds a major low. One clue is retail (green) is buying but not the whales (red). During prior major lows since 2021, whale buying preceded large rallies in Bitcoin.

Given the macro backdrop, the S&P 500 could correct -50% from peak or worse. This would imply a Bitcoin correction of at least it's typical -84% to -87% which would put it around $10k. The chain reactive effects of miner and long term whale holder capitulation could create a wick-down situation where Bitcoin goes well under $10k, much as it hit $150 in Jan-2015 before bouncing back above $200 the same day.
Like what you read?
Let us help you make sense of these markets by signing up for our free Market Lab Reports:
This information is provided by MoKa Investors, LLC DBA Virtue of Selfish Investing (VoSI) is issued solely for informational purposes and does not constitute an offer to sell or a solicitation of an offer to buy securities. Information contained herein is based on sources which we believe to be reliable but is not guaranteed by us as being accurate and does not purport to be a complete statement or summary of available data. VoSI reports are intended to alert VoSI members to technical developments in certain securities that may or may not be actionable, only, and are not intended as recommendations. Past performance is not a guarantee, nor is it necessarily indicative, of future results. Opinions expressed herein are statements of our judgment as of the publication date and are subject to change without notice. Entities including but not limited to VoSI, its members, officers, directors, employees, customers, agents, and affiliates may have a position, long or short, in the securities referred to herein, and/or other related securities, and may increase or decrease such position or take a contra position. Additional information is available upon written request. This publication is for clients of Virtue of Selfish Investing. Reproduction without written permission is strictly prohibited and will be prosecuted to the full extent of the law. ©2022 MoKa Investors, LLC DBA Virtue of Selfish Investing. All rights reserved.
FOR OUR FREE MARKET LAB REPORT :