Market Lab Report - Is Hyperinflation Around the Corner? 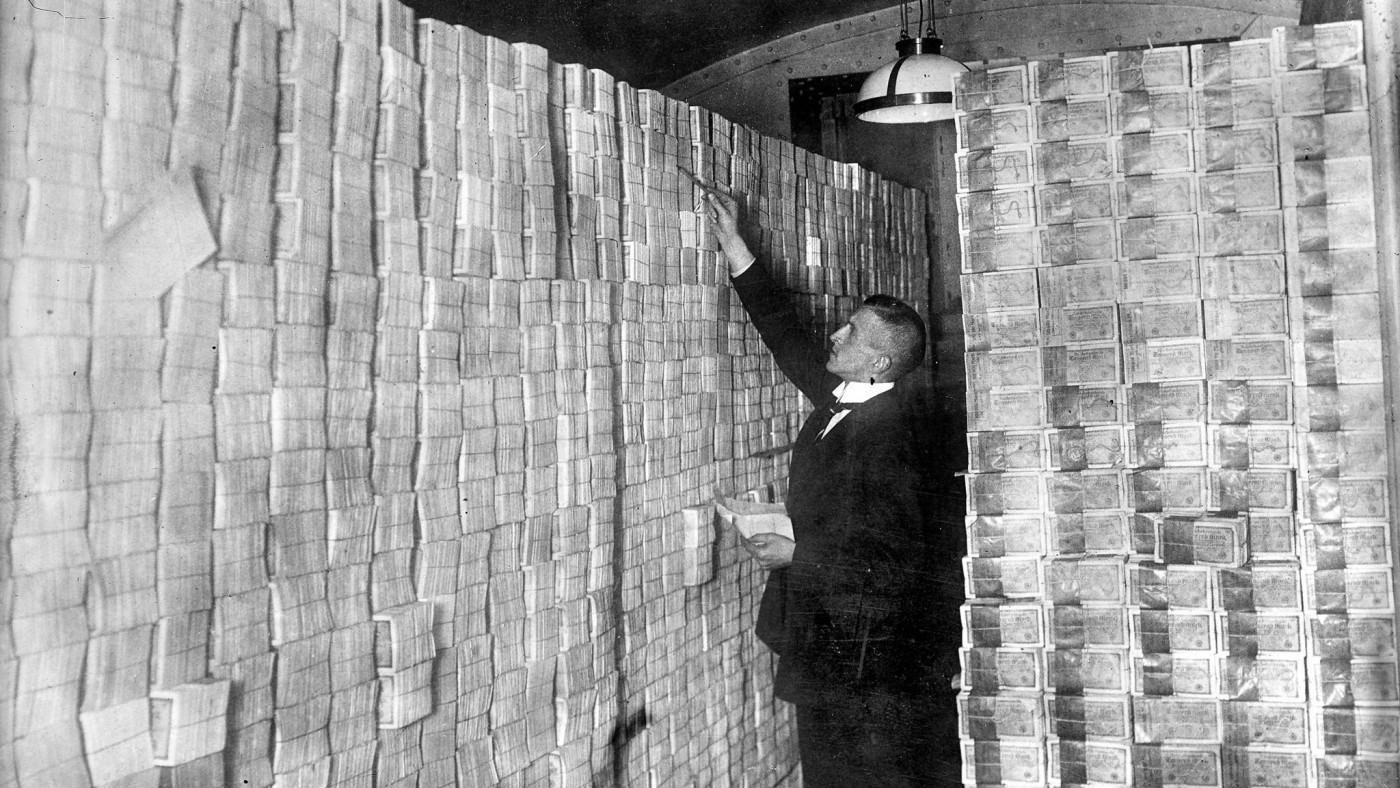 Within the metaverse, crypto is laying the foundations for a self-sovereign financial system, also known as decentralized finance, or DeFi. Such a system is quantum leaps ahead of traditional, centralized systems. Legacy banking has become a joke, a dinosaur that fails to cope with the fast paced, ever-changing technological climate. Since economics rules the day as people vote with their pocketbooks, the technologies that create utility with speed, scalability, and security will win the day.

At present, we have old school ways of handling monetary policy called central banks. A small group of people in suits guide the way, often divorced from technological trends. Meanwhile, fiat continues to debase, slowly robbing people of their savings, though faster in some countries such as Venezuela, South Africa, and Argentina. This has begged the question whether the world’s reserve currency could be vulnerable to systemic shocks brought about by the tipping point on which the planet sits given historically high levels of debt while interest rates plumb 5000-year lows.

QE∞ : Is Hyperinflation Around the Corner?

Governments have printed $25 trillion since COVID. How could one not find bitcoin attractive? And with two new massive stimulus packages on the way in the U.S. in additional to stimulus packages around the planet, concerns have risen that the U.S. and other countries will repeat the hyperinflation of Germany's Weimar in the 1920s. Inflation is coming but interest rates should head lower and even more negative in some cases over the next 18 months to a few years. Once COVID recedes due to mass vaccinations enabling human beings to reach herd immunity, many more businesses will reopen to the public and people will start spending again.

Certainly, too much money chasing too few goods will induce accelerating inflation. This could cause a spike in inflation as demand surges which will force the Fed and other central banks to try to raise interest rates but this will cause their respective stock and bond markets to correct. As a key example, each time the Fed has tried to do this, the stock market has gone into a correction of typically 10-20%. The last time was in 2018 when the Fed was trying to tighten its balance sheet. This resulted in the first xmas crash ever on Dec 24, 2018. Powell had no choice but to once again loosen its balance sheet, which caused the stock market to soar. COVID also forced tons of stimulus which caused another soaring market that started last March. 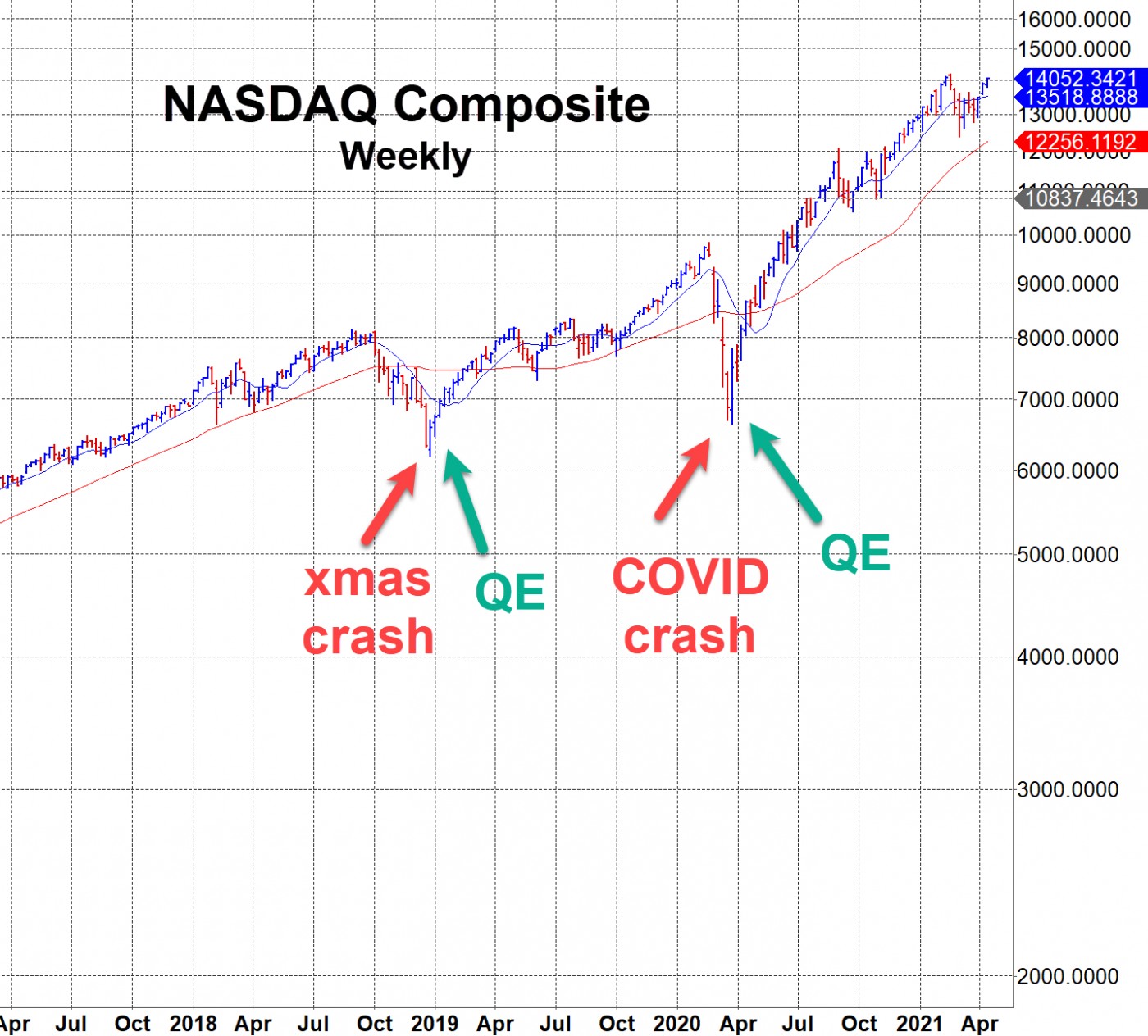 Now with Biden in power and Dems loving stimulus, and with two massive stimulus packages on the way, interest rates should likely continue to fall (overall), and stocks/bonds/bitcoin/cryptocurrencies should continue to rise.

If history rhymes, today's situation could shadow what happened in Germany in the early 1920s. There is no guarantee of this of course as exponential technologies create massive utility thus could partially offset the degree and severity of accelerating inflation. Either way, it is interesting to see that stocks did very well during Germany's bout with hyperinflation whether measured in German marks or U.S. dollars. In 1923, stocks soared over 1700% priced in USD but this paled in comparison to German stocks which soared more than 50 million-fold priced in marks. 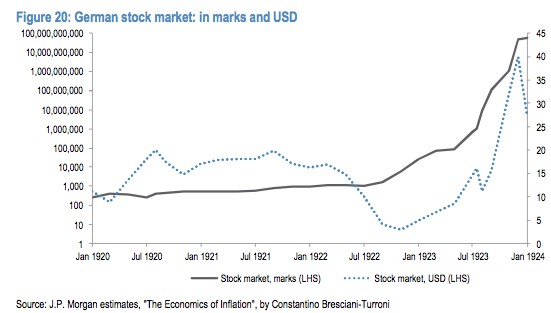 Hard assets and stocks don't vanish even if a currency goes to zero. So in this incarnation of massive debt with historically low rates, hard assets, stocks, precious metals, real estate and bitcoin are safe havens against falling fiat.

One individual Hugo Stinnes – dubbed “The Inflation King” – thrived. He borrowed heavily before hyperinflation hit then used the capital to buy hard assets. His coal, steel, and shipping vessels retained their value. He also bought companies abroad that earned in local currency, not worthless reichsmarks. He kept some profits offshore in the form of gold held in Swiss vaults to avoid both hyperinflation and German taxation.

Interestingly, the cause of hyperinflation was primarily due to the higher and higher prices of reparations demanded by the Allies after World War I ended. This forced the German government to accelerate their printing of banknotes to meet their debts. Hyperinflation was the result of these demands. Had the demands been moderated, massive sums of money would not have needed to be printed. Then when the German economy stabilized and consumers started spending, all the excessive currency in circulation spark hyperinflaiton.

Something similar could happen in today's world given the massive sums of fiat that have been brought into circulation over the last decade, with COVID having been a striking accelerant of this trend.

One infamous outcome of the Weimar hyperinflation years was the “Zero Stroke” that plagued Germans who had to write endless amounts of zeroes in transactions. An article from Time Magazine in 1923:

With the price of bread running into billions a loaf the German people have had to get used to counting in thousands of billions. This, according to some German physicians, brought on a new nervous disease known as “zero stroke,” or “cipher stroke,” which may, however, be classed with neuritis as cipheritis.

The persons afflicted with the malady are perfectly normal, except “for a desire to write endless rows of ciphers and engage in computations more involved than the most difficult problems in logarithms.”

The lesson in today's world is to make sure your capital is concentrated away from falling fiat. As we have been advising members at VSI for the last decade since we realized QE is here to stay, the places to put one’s investment capital include bitcoin/crypto, stocks especially big tech, real estate, precious metals, and for the more conservative, bonds. Cash is no longer the safe play it once was. As Ray Dalio, the founder of the world’s largest hedge fund Bridgewater has said, “Cash is trash.”
Like what you read?
Let us help you make sense of these markets by signing up for our free Market Lab Reports:
This information is provided by MoKa Investors, LLC DBA Virtue of Selfish Investing (VoSI) is issued solely for informational purposes and does not constitute an offer to sell or a solicitation of an offer to buy securities. Information contained herein is based on sources which we believe to be reliable but is not guaranteed by us as being accurate and does not purport to be a complete statement or summary of available data. VoSI reports are intended to alert VoSI members to technical developments in certain securities that may or may not be actionable, only, and are not intended as recommendations. Past performance is not a guarantee, nor is it necessarily indicative, of future results. Opinions expressed herein are statements of our judgment as of the publication date and are subject to change without notice. Entities including but not limited to VoSI, its members, officers, directors, employees, customers, agents, and affiliates may have a position, long or short, in the securities referred to herein, and/or other related securities, and may increase or decrease such position or take a contra position. Additional information is available upon written request. This publication is for clients of Virtue of Selfish Investing. Reproduction without written permission is strictly prohibited and will be prosecuted to the full extent of the law. ©2023 MoKa Investors, LLC DBA Virtue of Selfish Investing. All rights reserved.
FOR OUR FREE MARKET LAB REPORT :