These metaversal/macro crypto pieces I have been writing have generated quite a following not just on Virtue of Selfish Investing but also on other websites. In fact, the following piece ended up on the front page of CityAM, the UK's fastest growing publication, clocking in close to 4 million readers.

I know some like to use metrics as a rough guide so find my updates in this area of use in terms of how much exposure they want to have in crypto as while some of their holdings are core holdings which they have held for a number of years, the other part of their holdings is speculative thus can move in and out of their exposure to crypto depending on where we are in the bull or bear market cycle.

In this piece, I wanted to take a moment to include some technical analysis which I will start doing when timely though the crypto reports which are more timely will also continue.

Prior Major Entry Points During Corrections

In October 2020, we had a small stock market induced correction in bitcoin and ethereum where both corrected 15.1% and 36.5%, respectively. Alt coins lost much more as the delay in the stimulus package wore on. They are far more sensitive to QE stimulus than BTC or ETH. Alts crashed typically between 67-90% peak-to-trough from early September to early November. But BTC being the leader showed an entry point where the daily chart of BTC first showed a pocket pivot on Oct 12 then a base breakout on Oct 21. 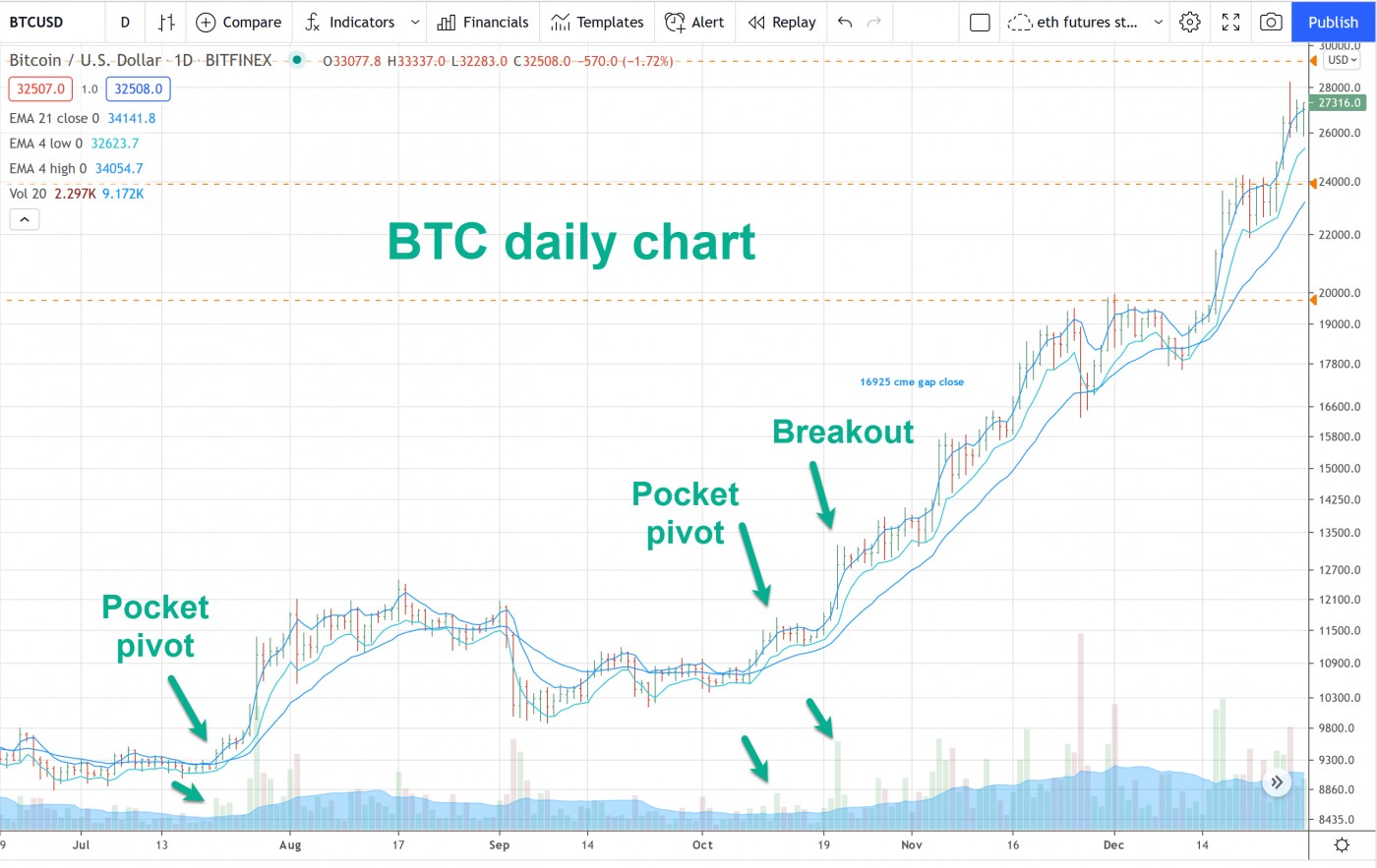 ETH issued its first entry point after the correction in September on Oct 7, 21 then Nov 4.

The top performing alt coins such as AAVE and Synthetix (SNX): 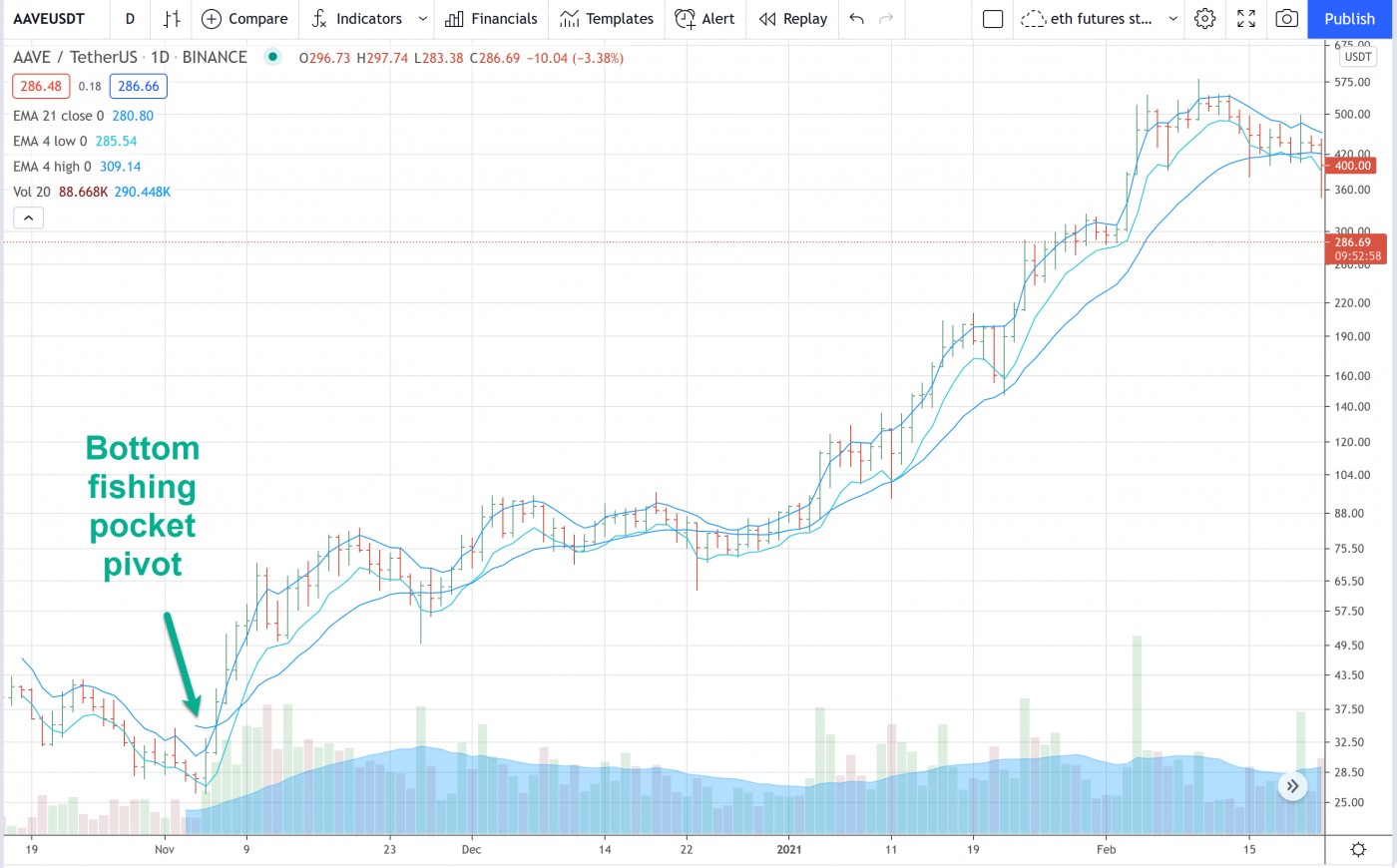 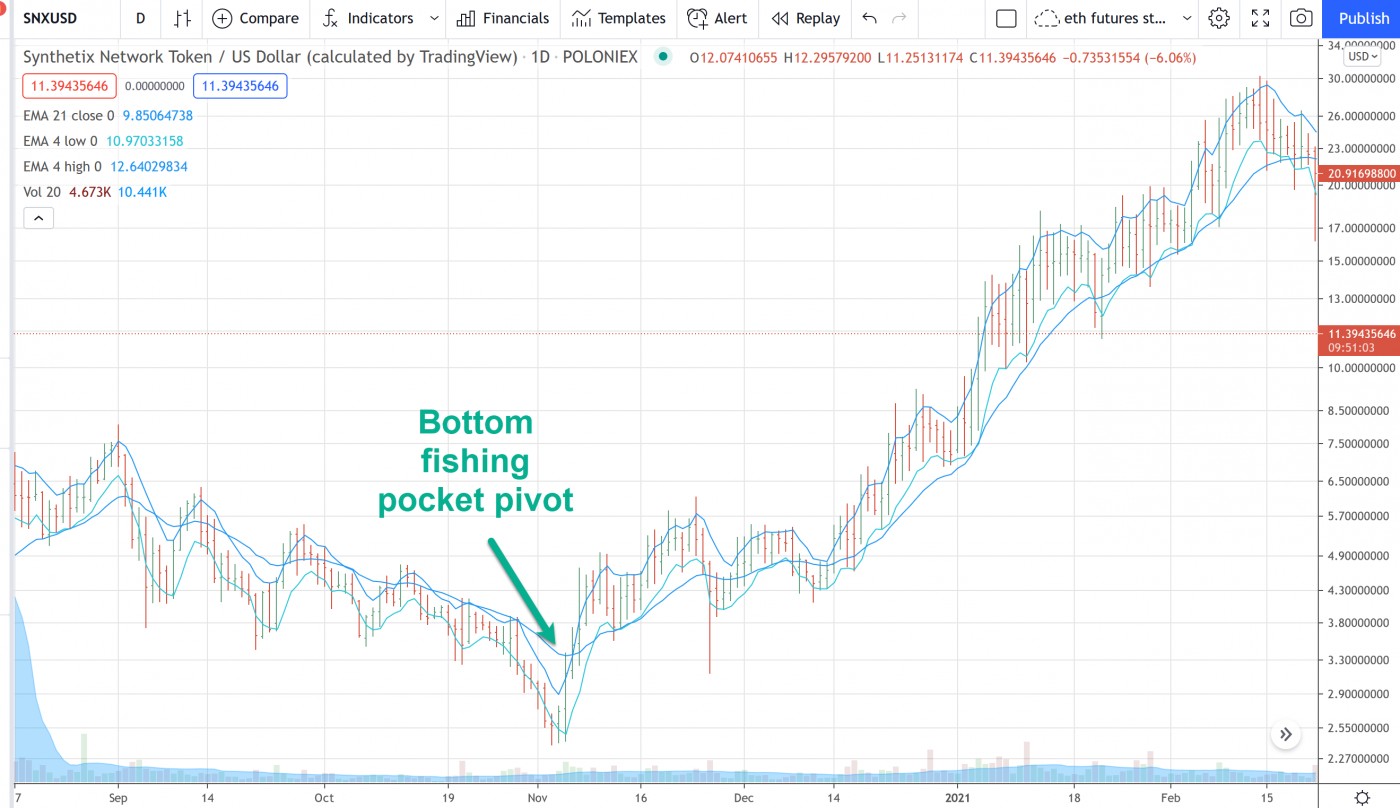 So while many day and swing traders which comprise the majority of crypto traders prefer the 1- and 4-hour bar charts, the biggest money is made using the dailies because you can see the forest for the trees.

Is The Bull Alive? Schrödinger’s Coin?

A number of members and non-members on other platforms have asked for my outlook on BTC given the strong drop-off in hash rate, transaction volume, new addresses, along with the major Grayscale BTC unlocking this month.

The steep drop in hash rate, transaction volume, new addresses, etc are all due to China's move to kick out their miners. Miners have expenses so need to sell their bitcoin to pay for relocation expenses, etc. This is one of the reasons bitcoin gets sold when it reaches the 35-36k level of resistance. That said, China's miners have mostly made successful moves to other countries as shown by recent miner activity.

The Grayscale unlocking in July should not create a big selloff in bitcoin because they would be selling at a discount. Most are likely to hold onto their bitcoin, but then once its price moves higher, this could create some headwinds of selling by those who want to breakeven. Alex Mashinsky thinks we will see one more wave of selling in late July due to unlocking, but Willy Woo correctly states, "That’s not how GBTC inventory works. It’s Hotel California for BTC, it can enter but never leave, apart from the 2% annualised fee which is deducted regularly. Keep an eye on the GBTC Premium for underlying demand as demand is climbing."

But perhaps whale buying absorbs the selling since long term holders are quietly accumulating bitcoin while the shorter term retail investors are selling. Maybe GBTC holders sell less BTC due to the current Grayscale discount, and maybe Altcoins and ETH outperform BTC as they have in prior bull markets once the bull market resumes.

Meanwhile, I've discussed other metrics in prior reports such as NUPL, miners ribbon compression, the GBTC discount heading back to neutral which shows BTC is being bought, ETF investors buying bitcoin, network growth at ATH, and BTC moving from weak to strong hands. All are at significant turning points based on prior corrections since 2012. Further, a concentration of whales hovers around mid-28k which explain why btc found a floor around this level on June 22. All of the above suggests 28-30k as a major floor in the price of bitcoin.

In addition, the trillions in stimulus combined with a serious supply shortage of both BTC and ETH are a powerful combination.


All that said, countering this are new potential recent black swans:

=Janet Yellen's rushed stance on regulating stablecoins. This could impact USDT, USDC, et al.
=Inflation on the rise which may create tough Fed talk about tapering QE.
=New strains of C19 are highly infectious. Some areas of the planet are having serious setbacks prompting a renewed wave of lockdowns which could postpone the recovery, though this could further boost QE.


Stay tuned. Buy signals will emerge if the last decade of price history is any guide, but high volatility has been and should remain standard, so watch your stops.
Like what you read?
Let us help you make sense of these markets by signing up for our free Market Lab Reports:
This information is provided by MoKa Investors, LLC DBA Virtue of Selfish Investing (VoSI) is issued solely for informational purposes and does not constitute an offer to sell or a solicitation of an offer to buy securities. Information contained herein is based on sources which we believe to be reliable but is not guaranteed by us as being accurate and does not purport to be a complete statement or summary of available data. VoSI reports are intended to alert VoSI members to technical developments in certain securities that may or may not be actionable, only, and are not intended as recommendations. Past performance is not a guarantee, nor is it necessarily indicative, of future results. Opinions expressed herein are statements of our judgment as of the publication date and are subject to change without notice. Entities including but not limited to VoSI, its members, officers, directors, employees, customers, agents, and affiliates may have a position, long or short, in the securities referred to herein, and/or other related securities, and may increase or decrease such position or take a contra position. Additional information is available upon written request. This publication is for clients of Virtue of Selfish Investing. Reproduction without written permission is strictly prohibited and will be prosecuted to the full extent of the law. ©2022 MoKa Investors, LLC DBA Virtue of Selfish Investing. All rights reserved.
FOR OUR FREE MARKET LAB REPORT :