The Metaversal Evolution Will Not Be Centralized™
The parade of horribles

Fed chair Powell testified before Congress at 10 am ET Wednesday. He stressed flexibility despite sticking to his plan to hike rates in March. This could be interpreted as being dovish but rates are still going higher. CME Fed Futures are now pricing in a 2% chance of a 50 bps hike, down from near certainty, and 5 rate hikes for this year, down from 9. While this has caused crypto and stock markets to bounce, the bounce may be short-lived if prior times the Fed was reducing QE/normalizing its balance sheet is any guide such as in 2014 and 2018 which sent cryptocurrencies into ruinous corrections. Indeed, the current bounce in crypto has also been due to short covering spikes where billions of dollars have been liquidated and some Russian oligarchs may be converting their rubles into bitcoin.

One must remember that Powell is influenced by deep state career politicians, ie, those whose terms are indefinite such as those in the CIA, NSA, and FBI. Most have exposure to stocks and various hard assets, thus would strongly advise Powell to avoid a deep correction in the stock market. This pressure on Powell to postpone rate hikes is likely as when the U.S. market had a deep 20% correction in early 2016 after the first rate hike in many years occurred in Dec-2015. Powell then said he would postpone hikes until Dec-2016 which helped major averages regain sharp losses then trend higher.

Balance sheet normalization, ie, tightening, then continued with a 25 bps hike in Dec-2016 then several more hikes until Dec-2018 when the stock market had its first Xmas crash on record. This prompted Powell, once again, to sooth markets in Dec-2018 by saying tightening may end, then actually ending tightening in Jan-2019. This was a green light that was then discussed Mar 18, 2019 in a report we sent out to members where we concluded, "But it is more likely bitcoin will meander higher as it has done after major bottoms such as in Jan-2015 for an intermediate to long term trade in GBTC. End of Dr. K comment." 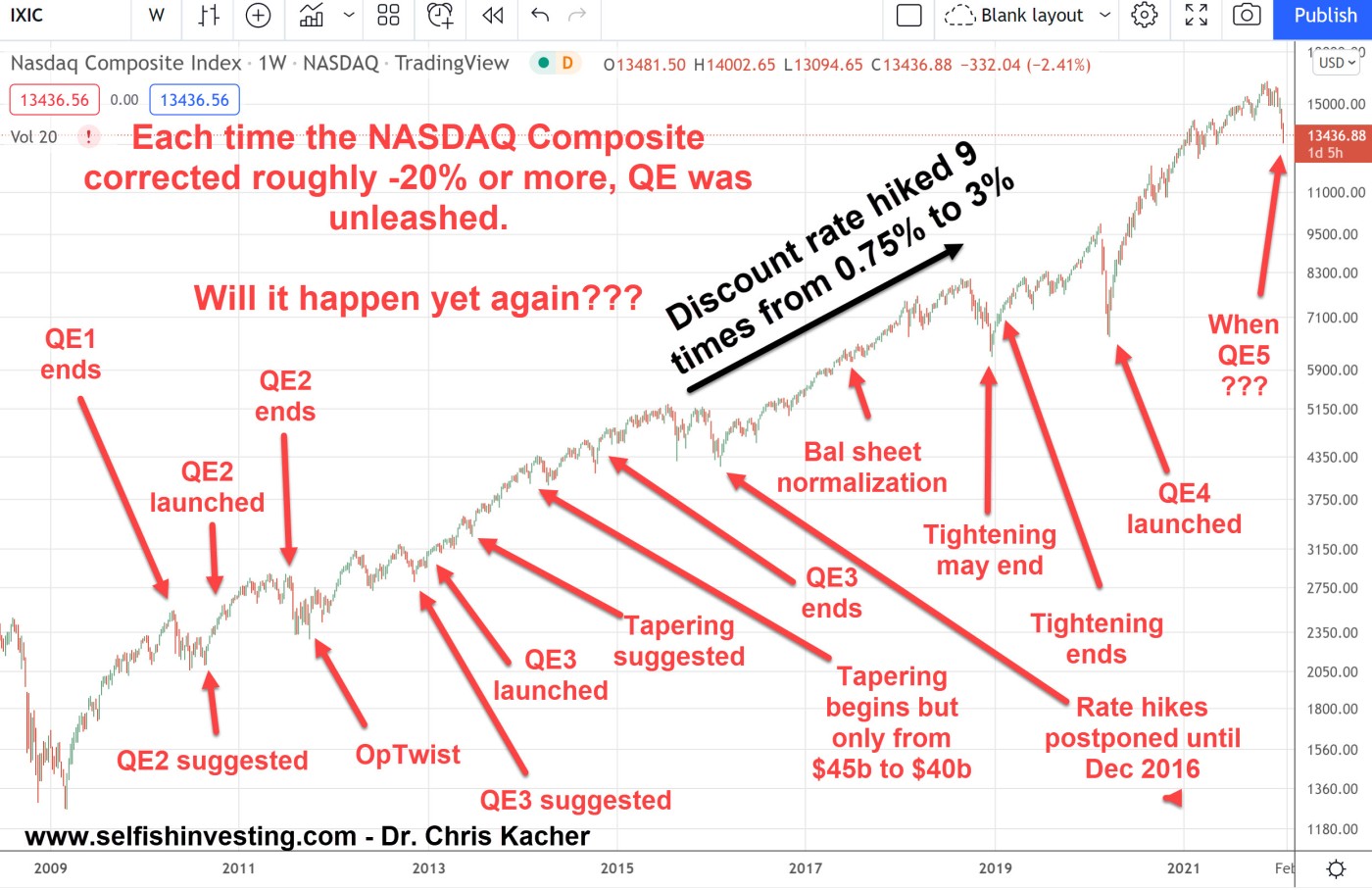 Powell's testimony did not indicate the postponement of any sort of tightening, so the recent low in stocks and crypto is less likely to be a major low thus increasing the probability of a dead cat bounce.

In today's market, we have a parade of horribles. Debt is at record levels due to C19, interest rates are at 0%, and inflation is soaring. While this has caused a few major central banks to hike rates by token amounts, no central bank including the U.S. central bank has the headroom to hike by any meaningful amount. Meanwhile, Russia's invasion of Ukraine along with the sanctions are sending crude oil and commodities prices soaring.

Some major institutions have put out reports citing how in prior war crises situations, the initial drop in the stock market was a big buy signal. During historical invasion events, risk assets (stocks) bottomed just before “invasion” five out of five times. History shows the S&P 500 six months prior (two months prior are shaded in gray) and 18 months after invasion events.

Today's situation is different due to record levels of debt, 0% interest rates, and soaring inflation. All suggest that until Powell cries uncle and reverses his stance on tightening, any bounces in stocks and crypto are suspect.

The U.S. wants to keep the dollar as the world's reserve currency. Other central banks dance to its steps, so the Fed could very well reverse its hawkish decision in the coming months despite soaring inflation by using the situation with Russia-Ukraine as the excuse to postpone hikes along with supply chains being hit hard. Governments never let a good crisis go to waste. Meanwhile, fiat remains a sinking titanic; it took the Titanic many hours to sink but sunk nevertheless. Recent developments in Canada wherein its government can freeze someone's funds without legal process, then the CEO of major crypto exchange Kraken advising its users to store their crypto in a private wallet off the exchange where the user controls their own keys, underscores how Bitcoin in the years ahead stands to become the world's reserve currency.

The February employment report on Friday Mar 4 and Feb consumer price index on Mar 10 will be two reports the Fed weighs heavily in terms of how much space they have to hike rates. Because inflation tends to have a long tail that persists for a couple of years, the Fed will have to battle against this, caught in between soaring inflation and debt while interest rates are at 0%.
Like what you read?
Let us help you make sense of these markets by signing up for our free Market Lab Reports:
This information is provided by MoKa Investors, LLC DBA Virtue of Selfish Investing (VoSI) is issued solely for informational purposes and does not constitute an offer to sell or a solicitation of an offer to buy securities. Information contained herein is based on sources which we believe to be reliable but is not guaranteed by us as being accurate and does not purport to be a complete statement or summary of available data. VoSI reports are intended to alert VoSI members to technical developments in certain securities that may or may not be actionable, only, and are not intended as recommendations. Past performance is not a guarantee, nor is it necessarily indicative, of future results. Opinions expressed herein are statements of our judgment as of the publication date and are subject to change without notice. Entities including but not limited to VoSI, its members, officers, directors, employees, customers, agents, and affiliates may have a position, long or short, in the securities referred to herein, and/or other related securities, and may increase or decrease such position or take a contra position. Additional information is available upon written request. This publication is for clients of Virtue of Selfish Investing. Reproduction without written permission is strictly prohibited and will be prosecuted to the full extent of the law. ©2023 MoKa Investors, LLC DBA Virtue of Selfish Investing. All rights reserved.
FOR OUR FREE MARKET LAB REPORT :