Market Lab Report - Where Do Stocks Go From Here?

Bringing Billions to Blockchain via Quantum Poodles™
Where Do Stocks Go From Here?

The burning question is where do stocks go from here? With the election around the corner, it's a contest of wills between the Democrats and Republicans. As concerns stocks, there are a few safety nets that await. Various central bankers including Fed Chair Powell have said more stimulus is needed for the economy to recover. Without the needed stimulus, capital will continue to flow out of stocks and into the dollar which has enjoyed a spike over the last few weeks though has been on a longer term downtrend overall since March.

Should stocks continue lower, along with the more highly correlated bitcoin and gold as of late, Powell will most likely step in with accelerated levels of quantitative easing as he always has since the financial crash of 2008. But even if he does not, Trump can ultimately unlock $300 billion of unused stimulus without congressional approval if need be as he did in early August. During a news conference on September 4, Trump said another $300 billion in unused stimulus aid could be provided if Congress doesn't vote to redirect those funds.

It seems like a no-brainer. Such stimulus will push stocks higher and since voters vote with their pocketbooks, it pushes odds in his favor he will be reelected. So I believe it is only a short while before stimulus of some sort is unleashed. Powell has been on a speaking circuit this week and both him and Mnuchin have both favored additional stimulus to help struggling Americans in regard to the larger budget agreement. Not surprisingly, about a century ago, a similar situation arose during the Spanish Flu pandemic with each side playing the other for political yardage.

If history is any guide, watch for the stock market, gold, and bitcoin to find their floors sooner than later. Look for undercut & rally situations in instruments such as GBTC (Grayscale Bitcoin ETN) [members were sent such an actionable event on Thursday], gold and silver ETFs, and leading stocks (AMZN, AAPL, FB, etc).

In a related matter that concerns the debasement of fiat, there are currently some 35,000 major publicly traded companies worldwide with cash war chests that are being debased due to QE. If even 1% of that capital finds its way into bitcoin should they follow Microstrategy's lead, this alone would push the price of bitcoin into the trillions. It was significant that Microstrategy bought $425 million worth of bitcoin not for speculation but as a hedge against falling fiat. Jack Dorsey's companies Twitter and Square both hold cash reserves of $10 billion. Dorsey has a hashtag in his Twitter profile: #bitcoin.

As Peter Diamandis has pointed out, dematerialization is one of the 6 D's where analog (physical) goes digital. Apple turned telephone lines into mobile networks, Google digitized information at large through ad and search, YouTube digitized video, Twitter digitized speech, Amazon digitized retail shopping, bitcoin digitizes store of value (SoV). This SoV is so substantial, Microstrategy's research shows eventual real bitcoin dominance is 92% with the next network (ethereum) at 2%, and the one after that at 1.5%. In other words, SoV is the killer app of killer apps. But this 92% will likely take a decade or longer to achieve. 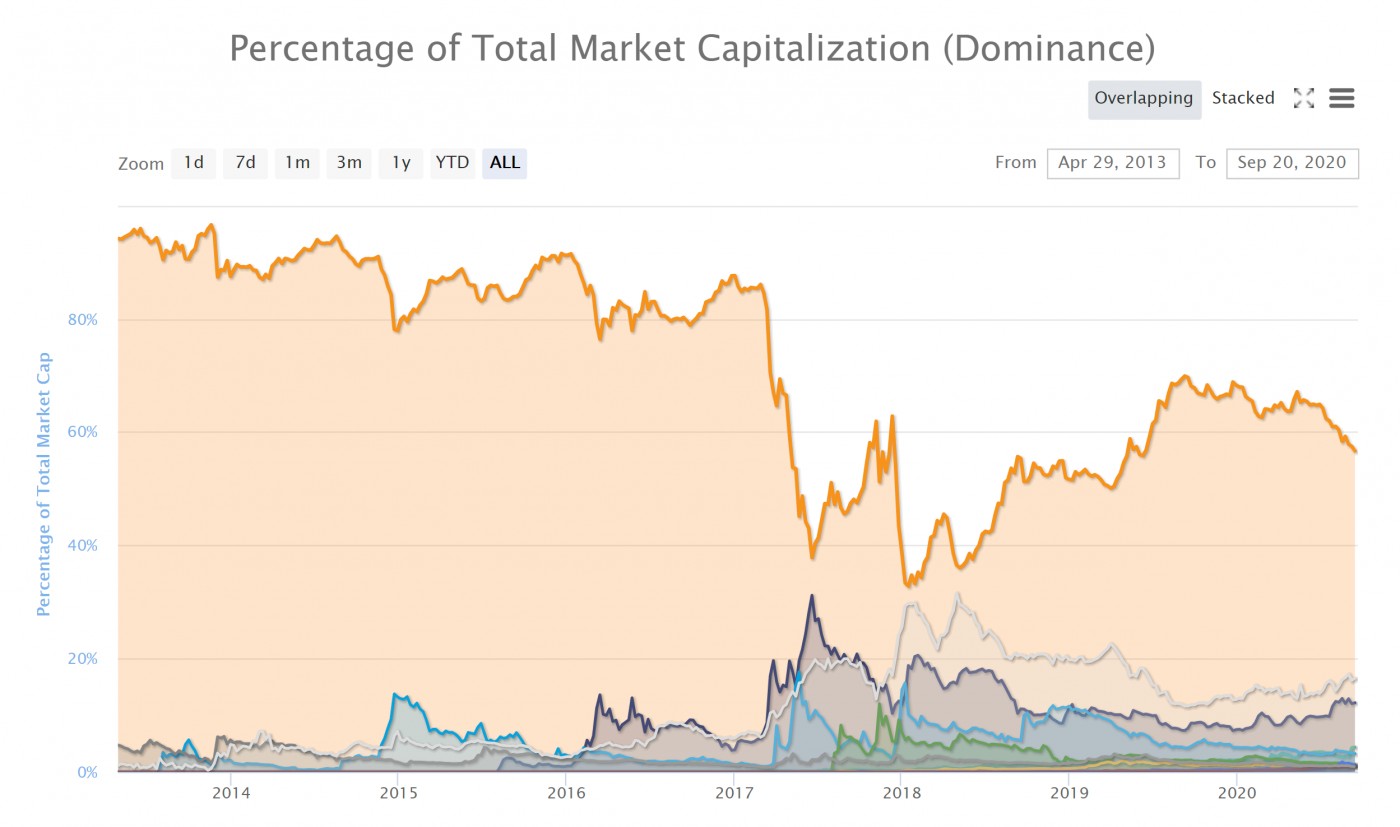 Of course, should a big paradigm shift occur regarding fiat currencies sooner than later, this changing of the guard from centralized fiat to decentralized bitcoin may come sooner. For now, both will continue to co-exist, though the gap between bitcoin and M1 money supply continues to narrow.

In the meantime, the estimated other 8% (which stands currently at roughly 43%) is real utility created by faster transaction times at lower cost with a trustless model that removes numerous middle men across many industries. Note, should the current 43% shrink to 8%, this in no way way suggests the space will shrink, but rather, it will continue to grow exponentially. It is just that the valuation of bitcoin itself will grow even faster, thus Michael Saylor's research team suggests bitcoin will eventually find equilibrium at 92% of the whole blockchain market.

People worry that AI will take our jobs, but so will blockchain since it makes those in the middle redundant. Much retraining will come since new job creation will occur as has always been the case. But in next evolution, the average work week will drop further, much as it dropped from the turn of last century. By and large, mental tasks overtook physical labor over the last century. Over the next generation, mental tasks may be applied more towards the creative side rather than the rote side due to AI and of course, the powerful combination of AI and blockchain.

The disruption of existing paradigms is pronounced. Companies such as Starbucks are now deploying blockchain tech across its major supply chains. Banks are starting to integrate blockchain into their systems. Decentralized finance by way of peer-to-peer (p2p) lending including mortgages, uncollateralized loans, and p2p decentralized exchanges (DEXs) will co-exist with centralized systems.

The CEO of the largest decentralized financial company Aave (ticker: LEND) wrote to Elon Musk to tokenize TSLA stock which would allow people to use their cars as collateral to borrow $USDC for other purchases. Special purpose vehicles (SPVs) will exist in this manner and LEND aims to be at the forefront. In the future, you wont have to go to a bank for a mortgage loan. You will be able to finance your home through tokenized mortgages. You could go to a decentralized financial platform such as Metamask, and take out a mortgage/real estate loan that is tokenized then locked in as collateral. Thus retail investors will be able to buy mortgages for small money, so the retail market will have access to the global market for mortgages. LEND has most recently partnered with RealT. It's no mistake that LEND is up over +1,000% since I added it to the crypto list on May 9, 2020.

Bitcoin, blockchain, and its subset of decentralized finance among other sectors, are anti-fragile. Bitcoin hacks used to be normal several years ago. But the longer something survives, the longer it will survive. When risks diminish, there is less upside because the price has already moved much higher. At present, there is still big upside in blockchain because it is still relatively new thus brings much skepticism and thus the level of perceived risk is high.

Those who are blinded by bitcoin's success who are known as bitcoin maximalists often say ethereum and alt coins are scams. In another interesting turn of events besides institutions starting to embrace bitcoin such as Fidelity and JP Morgan, bitcoin maximalists are now doing an ICO using the ethereum ecosystem. They are not using bitcoin's lightning platform because they realize ethereum is far better and ready for prime time. Fate, it seems, is not without its sense of irony.