The Fed stated that it's going to cut rates while the Dow traded at new all time highs.  Expect more of the same for 2020 as the Fed seeks to reduce the risks of recession during election year by pumping money into stocks and bonds via QE.
The market tanked after Powell said that this might not be the beginning of an easing cycle, but renewed heat between the U.S. and China will force Powell's hand to lower rates further. Powell of course must walk the tightrope between too much and too little monetary easing. Had Powell signaled the Fed was preparing deeper cuts, this could have sparked fears the economy is economically much weaker than indicated by current data. According to the president of world markets at TIAA Bank, Powell’s description of the rate cut as a mid-cycle adjustment and not necessarily the start of a lengthy series of rate cuts combined to send “a bit of a shock wave into the markets and is in direct contradiction to the market expectations of continued cuts over the remainder of the year."
Nevertheless, this song and dance Powell plays with the markets has been a broken record since 2009 when QE began. The Fed must assume an austere hand in terms of how much morphine they are willing to inject into the markets, yet in the end, with the global economy still half of the way to comatose, the Fed ends up giving the market what it wants in the form of reduced rates. Thus in near perfect rhythm, the more hawkish the Fed becomes, the deeper the correction, while the more dovish, the longer the uptrend lasts.

The Fed is likely to remain more or less dovish as the election year approaches, thus securing Trump's reelection since people have always voted in an incumbent when the economy appears healthy, notwithstanding the fact that appearances are often misleading especially in this Age of QE. CME Fed Futures adjusted over the weekend from one to now two rate cuts by the end of the year as shown below due to escalating trade tensions between the U.S. and China. 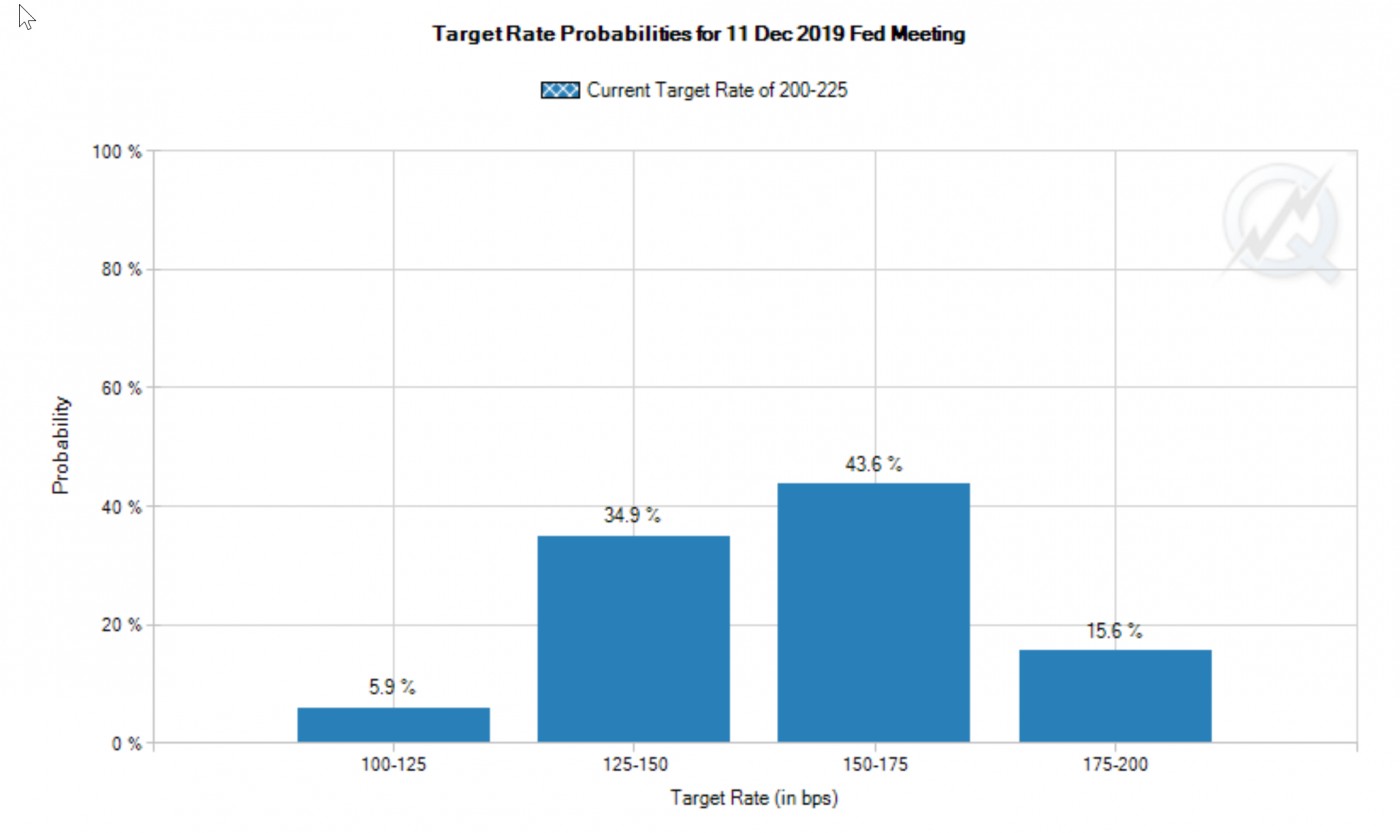 Gold and silver in premarket trading as well as bitcoin since Friday are all shooting higher as a consequence.
China's Yuan Hits 11-Year Lows

China's yuan tumbled more than 1% on Monday to 11-year lows on mounting fears over a sharp escalation in the U.S.-China trade war. The People's Bank of China set the yuan exchange rate above 6.9 to the dollar with the yuan clearing 7 for the first time since 2008 with the offshore yuan rate hitting a record low. This is China's response to the new Trump tariffs aimed at neutralizing the effect of U.S. tariffs on Chinese corporate profitability. Beijing also instructed state buyers to stop buying U.S. agricultural produce for good measure. With these latest moves, it raises the odds that the 10% tariff hike on U.S. imports of some $300 billion worth of Chinese goods will come into force in September, as threatened last week by Trump.

China’s step raises the risk of competitive devaluations elsewhere in a “race to the bottom” or as we have said in numerous interviews over the years, a "race to zero" across major fiat currencies around the world. Trump has scolded the Federal Reserve on the dollar’s overvaluation and the Federal Reserve’s unwillingness to end it by loosening monetary policy. Of course, the latest situation forces the Fed's hand to reduce rates further in the coming months, thus the sharp readjustment in the CME Fed Futures from one to two rate cuts by December 2019.

Given QEndless, it is not terribly surprising how the price of gold as shown below by its ETF GLD is finally awakening after several years of back-and-forth go-nowhere price action. 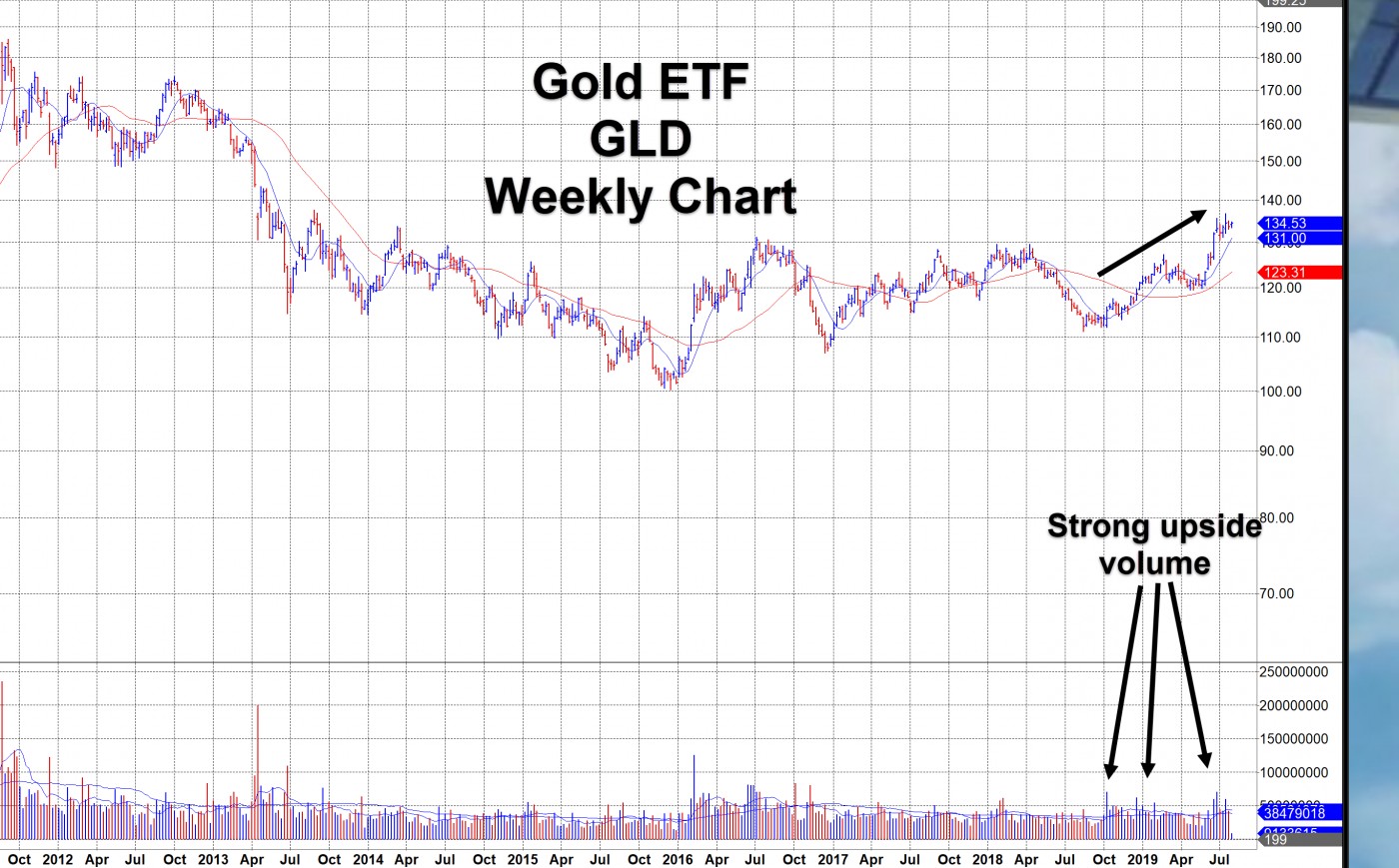 Meanwhile, the price of bitcoin continues to move higher over the long run as it represents a store of value that cannot be printed, cannot be inflated away, cannot be controlled, is fully decentralized, offers unlimited, borderless transactions of value, and cannot exceed its maximum 21 million units based on its mathematics. 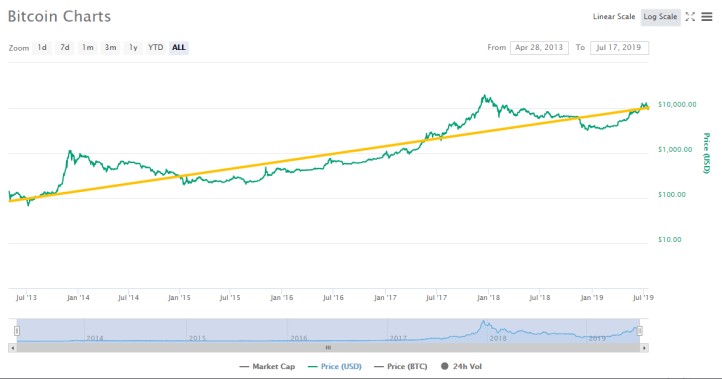 Bitcoin tends to thrive for many reasons including politically heated global issues as I wrote in a report here. There is a direct correlation between a rising price in bitcoin and various tensions around the planet.
Bitcoin and Gold vs. Dollar

Bitcoin's 'killer app' is its store-of-value (SoV). While some have said bitcoin has no underlying value, this SoV is a key intrinsic value. For the first time, people can transfer value across borders away from the control of governments. The technology is decentralized thus uncensorable, private, and secure. The SEC recently ruled that bitcoin is not a security thus cannot be regulated because it is decentralized.

Meanwhile, bitcoin's hash rate continues to hit new highs as shown in the charts below as the number of users, wallets, and transactions continues onwards and upwards, underscoring how the rate of adoption doubles every year.

Major businesses not limited to Facebook, Microsoft, and IBM are developing products and services that use blockchain technology. Indeed, $1 quadrillion worth of "things" can be recorded on the blockchain and exchanged using various alt coins, tokens, and fiat currencies using bitcoin as the base currency. Singularly, bitcoin may become the global store of value, and as bitcoin’s network grows, it will continue to capture more and more of this wealth as its valuation reaches into the trillions.

Ray Dalio who founded one of the most successful hedge funds in history, Bridgewater, said he expects a major devaluation of fiat currencies to come within the next few years due to the unprecedented levels of debt created by quantitative easing that started in late 2008 by the U.S. Federal Reserve then spread across the planet to other central banks who had no choice but to print.

Should it be possible to grow out of the debt via technologies that are growing exponentially such as blockchain, AI, and VR, this would enable central banks to move from QE to QT (quantitative tightening). But the potentially endless growth of onerous levels of debt seem to be outpacing even the breakneck speeds of exponential tech development. Stubbornly sluggish global economic growth continues to defy QE while the inflation mega-trend rages on.

The Gold-Silver ratio is trading at an historic extreme of 90.31 as shown below. The historic average is 50 which on the current gold price of $1430 would have silver trading at $28.60. Instead, silver is currently trading at $16.51. Expect silver to catch up to gold to reduce the ratio back down towards 50.

Silver did issue a pocket pivot on July 16 on which we reported HERE. Due to QE, gold and thus silver should continue to move higher. The same goes for hard assets including real estate as well as for of course bitcoin. Mega cap stocks such as AMZN, AAPL, FB, and GOOGL also benefit as freshly printed capital finds a home in U.S. stocks and bonds. Perhaps this is one reason why such stocks have shrugged off the Justice Department's announcement of being investigated for monopolistic practices.

Bitcoin = Zero Underlying Value vs. Intrinsic Value
One brief revisit on bitcoin having no underlying value. Bitcoin may not have any hard assets underlying its value but neither do peer-to-peer (p2p) file sharing platforms that have been plaguing the justice system since the 1990s. Both are built with code, are fully decentralized, and used by tens of millions of people. Governments such as the U.S., China, and Russia have been unable to stop the torrid growth in either technology despite outright bans at times. The keys that supercharge both technologies is borderless data exchange via p2p platforms such as Pirate's Bay, and borderless exchange of value via bitcoin, thus the intrinsic value in the form of utility in both is massive.
(͡:B ͜ʖ ͡:B)
Like what you read?
Let us help you make sense of these markets by signing up for our free Market Lab Reports:
This information is provided by MoKa Investors, LLC DBA Virtue of Selfish Investing (VoSI) is issued solely for informational purposes and does not constitute an offer to sell or a solicitation of an offer to buy securities. Information contained herein is based on sources which we believe to be reliable but is not guaranteed by us as being accurate and does not purport to be a complete statement or summary of available data. VoSI reports are intended to alert VoSI members to technical developments in certain securities that may or may not be actionable, only, and are not intended as recommendations. Past performance is not a guarantee, nor is it necessarily indicative, of future results. Opinions expressed herein are statements of our judgment as of the publication date and are subject to change without notice. Entities including but not limited to VoSI, its members, officers, directors, employees, customers, agents, and affiliates may have a position, long or short, in the securities referred to herein, and/or other related securities, and may increase or decrease such position or take a contra position. Additional information is available upon written request. This publication is for clients of Virtue of Selfish Investing. Reproduction without written permission is strictly prohibited and will be prosecuted to the full extent of the law. ©2020 MoKa Investors, LLC DBA Virtue of Selfish Investing. All rights reserved.
FOR OUR FREE MARKET LAB REPORT :