The VoSI Focus List is a compilation and reference list of stocks for which Pocket Pivot or Buyable Gap-Up Reports have been issued and which have been deemed suitable for inclusion on the Focus List. Not all stocks for which a Pocket Pivot or Buyable Gap-Up report has been issued will necessarily be added to the list. It is not intended as a "buy list" or a list of immediately actionable recommendations. Stocks on the list may or may not be in proper buy positions, and investors should exercise discretion and proper judgment in determining when and where stocks on the Focus List can be purchased. The following notes are intended to assist in this process. Please note that members can enlarge the Focus List image by clicking on the body of the email and then holding the Control Key while pressing the "+" key until it is large enough to read.
General Observations:
The NASDAQ Composite Index moved to all-time highs on Friday on the heels of the Dow's new high through the 30,000 level earlier in the week. Volume was light on Friday due to the short post-Thanksgiving trading session 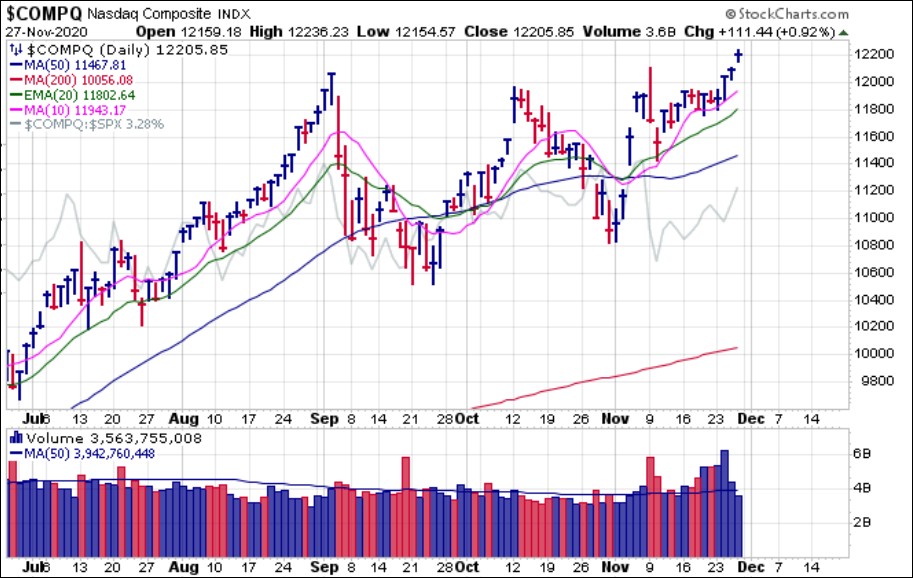 Notable Action:
We reported on five names in our Pocket Pivot Reports this past week. We alerted members to a possible pocket pivot in Lithium Americas (LAC) early on Friday and and the stock ended the day trading more than enough volume for a normal ten-day pocket pivot despite the half-day trading session. It stalled somewhat but still held above the 50-dma, keeping it in position while using the 50-dma as a tight selling guide. Piedmont Lithium (PLL) posed a pocket pivot on Monday at the confluence of its 10-dma, 20-dema and 50-dma. PLL stalled on Friday and we would look for a pullback to the 20-dema/50-dma confluence as the lower-risk option for a buyable pullback.

We also issued reports on Daqo New Energy (DQ) on Tuesday, and Shopify (SHOP) and Twitter (TWTR) on Wednesday. All three stocks have pushed higher and are now extended. Watch for pullbacks into nearby moving averages for possible lower-risk entries from current levels. 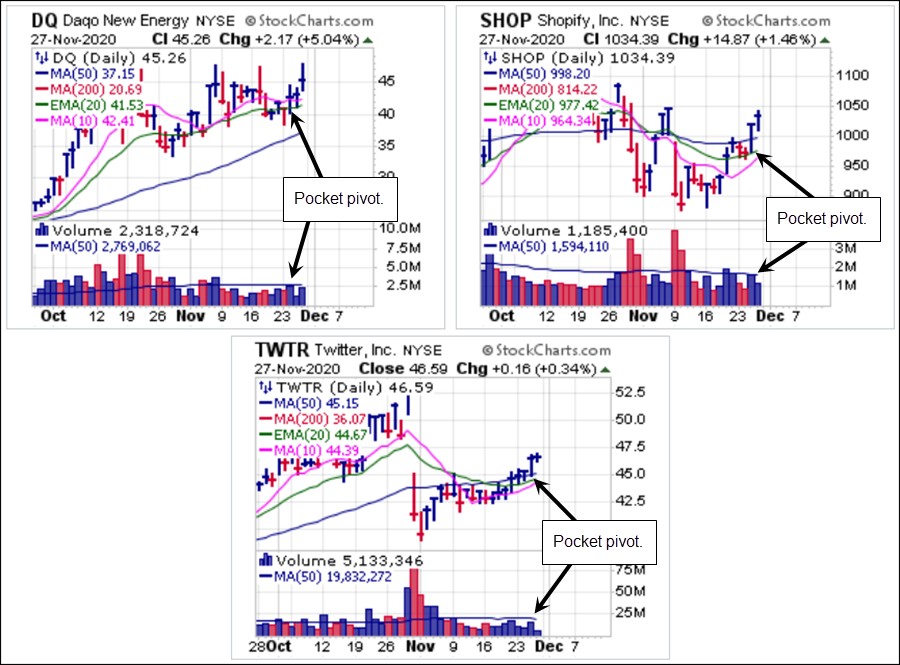 The pullback we were anticipating in the Grayscale Bitcoin Trust (GBTC) occurred on Wednesday and Friday after it went parabolic on a climactic move where it was up 8 out of 10 days in a row by Tuesday and posted the widest daily price spread/point move since the move off the 200-day moving average began. We discussed the potential for just such a pullback in the following report issued on November 18th: https://www.virtueofselfishinvesting.com/reports/view/short-sale-set-up-gbtc-short-add-strategy-11-18-20. The GBTC found support at the 20-dema on Friday on extremely high volume, but for now what you have is a massive-volume gap-down where we might expect some consolidation to occur. 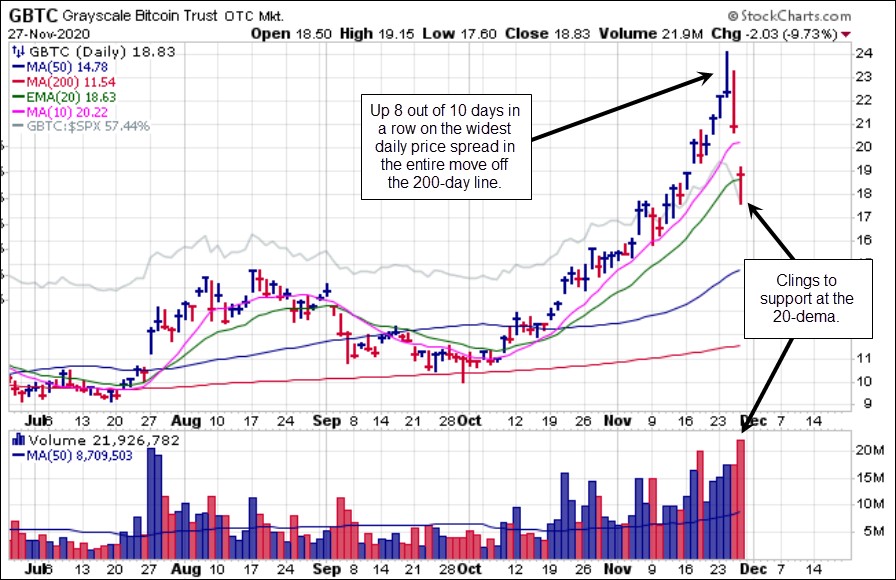 The Sprott Physical Gold Trust (PHYS) is testing critical support along the $14 price level as it breaks below its 40-week moving average. We are continuing to monitor this as the metals tend to be volatile, and the time to watch for buying opportunities tends to occur when people hate the metals. Bitcoin also displays this sort of love/hate relationship with investors whereby it tends to peak when everybody loves it, and bottom when everybody hates it. We will see whether this turns out to be the case again as the yellow metal heads south. 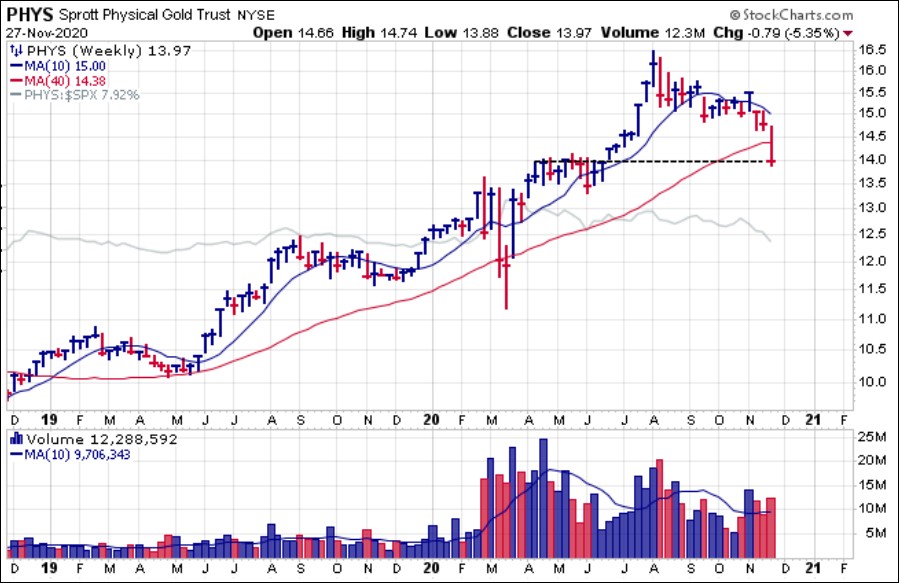 The Sprott Physical Silver Trust (PSLV) has been declining alongside gold, but remains above its 40-week moving average. As it comes down, we would watch how it acts along the September low at 7.75 which it closed above on Friday, and the October low at 7.92 which it closed below. This could create U&R types of moves from here and for now we can sit back and see how and whether such long entry signals materialize. 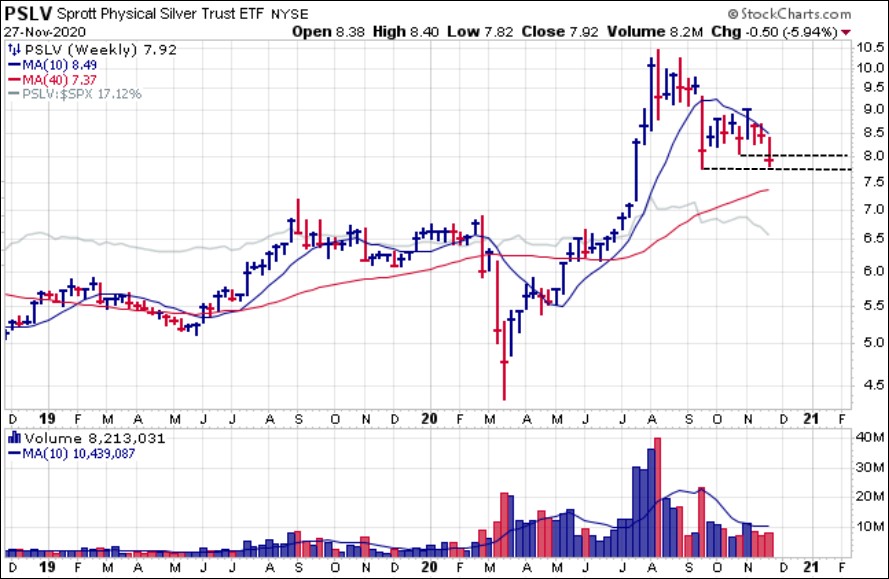 Tesla (TSLA) streaked through the $500 Century Mark this past week, corresponding to the $2500 level pre-split. This triggered a Century Mark buy signal per Jesse Livermore's Century Mark Rule on the long side. The stock came within an eyelash of the $600 Century Mark on Friday but reversed off its intraday highs to close in the lower half of its daily price range. The $600 level now looks like near-term resistance as the stock gets extended from its recent breakout. We discussed TSLA as a long entry two weeks ago as it was sitting along the $400 price level and its 65-day exponential moving average where it was showing consistent support while building its prior three-month base. 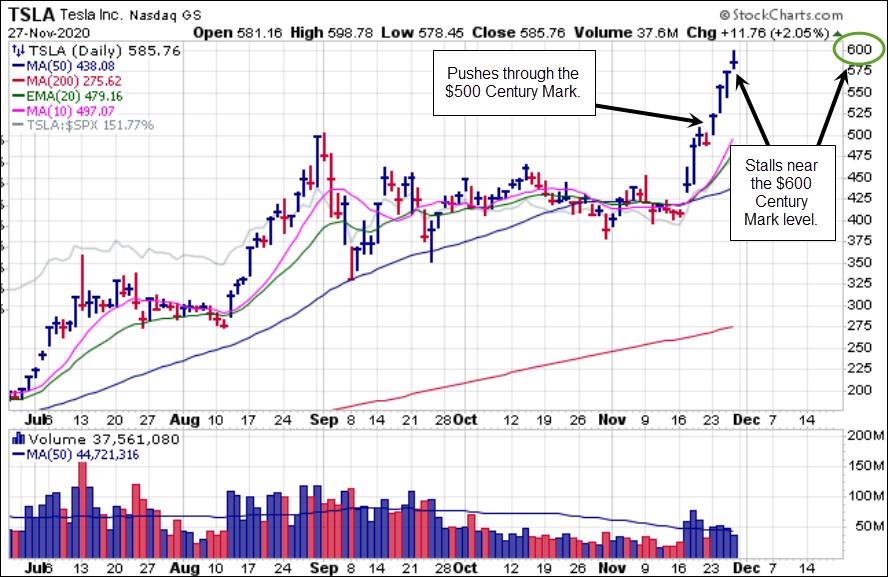 Microstrategy (MSTR), which is a Bitcoin cousin-play, held up well despite the sharp sell-off in Bitcoin over the past two trading days. The past two days' action looks a bit like a "tweezers top" type of formation with side price spreads and identical closes. This is not a case of "railroad tracks" since that pattern refers to weekly charts, not daily charts. The stock also looks climactic here after rising 9 out of 10 days in a row and showing its widest daily price spread on Friday. 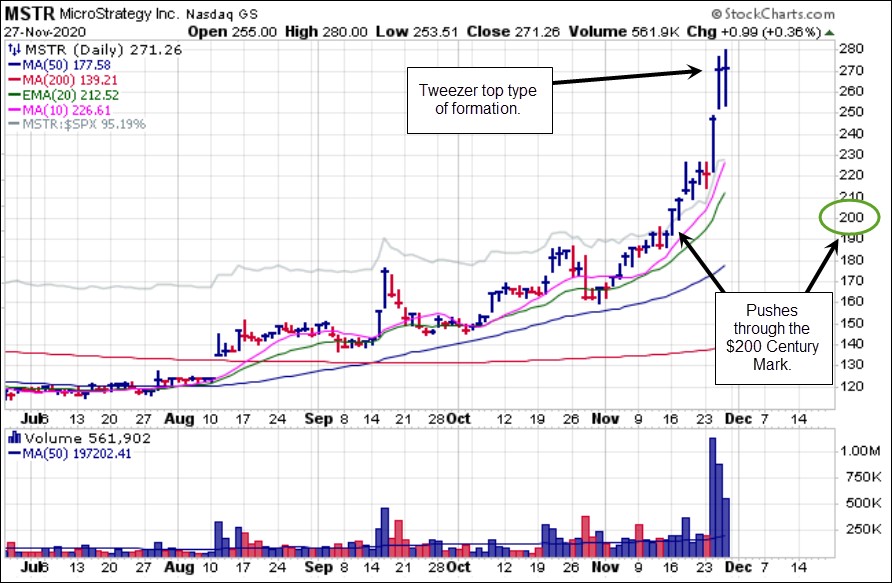 Nio (NIO) has obeyed its 10-day moving average all the way up for nine weeks now and therefore the 10-day line can be used as a selling guide based on the Seven-Week Rule. Chinese EV names that we reported on nearly two months ago, including names like Li Auto (LI) and Xpeng (XPEV), not shown, have performed similarly, with XPEV looking a bit climactic at current levels. With NIO, however, it is simply a matter of using the 10-dma as an objective selling guide. 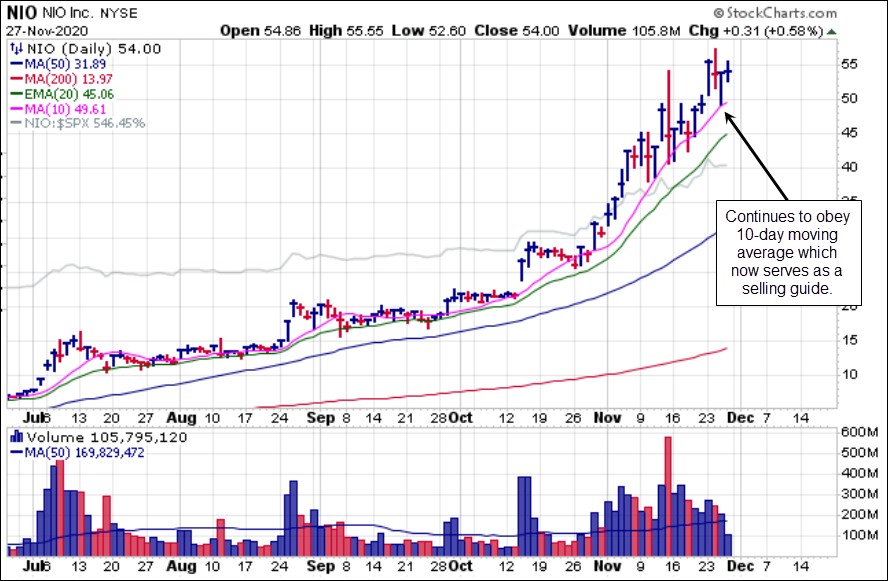 Climactic action in a number of hot areas of the market is perhaps cautionary as a broad array of sentiment indicators show extreme bullishness. However, as we learned in late 1999, when many cited the extreme froth in the market at that time and the market simply continued higher into March 2000, one should not try and predict market tops based on sentiment alone. However, there is some technical evidence to support the idea of at least near-term climactic types of tops in certain big leading names in this market, so having a strong grasp of your selling guides and being prepared to play a strong defense if and as necessary is advised.
This information is provided by MoKa Investors, LLC DBA Virtue of Selfish Investing (VoSI) is issued solely for informational purposes and does not constitute an offer to sell or a solicitation of an offer to buy securities. Information contained herein is based on sources which we believe to be reliable but is not guaranteed by us as being accurate and does not purport to be a complete statement or summary of available data. VoSI reports are intended to alert VoSI members to technical developments in certain securities that may or may not be actionable, only, and are not intended as recommendations. Past performance is not a guarantee, nor is it necessarily indicative, of future results. Opinions expressed herein are statements of our judgment as of the publication date and are subject to change without notice. Entities including but not limited to VoSI, its members, officers, directors, employees, customers, agents, and affiliates may have a position, long or short, in the securities referred to herein, and/or other related securities, and may increase or decrease such position or take a contra position. Additional information is available upon written request. This publication is for clients of Virtue of Selfish Investing. Reproduction without written permission is strictly prohibited and will be prosecuted to the full extent of the law. ©2022 MoKa Investors, LLC DBA Virtue of Selfish Investing. All rights reserved.
FOR OUR FREE MARKET LAB REPORT :