VoSI VooDoo(TM) Report - Follow-Up to Bitcoin and the GBTC

I wrote in my last VooDoo Report, dated March 18th, that there hasn't been much that is offbeat in this market until I began to see a potential low in Bitcoin that would be playable via the Grayscale Bitcoin Trust (GBTC). Back then, GBTC was trading well below $5.00, and within two weeks launched to the upside on a buyable gap-up move on April 2nd. That buyable gap-up move had an intraday low of 5.52, and GBTC has not looked back since. [Dr. K comment: I had sent a report on March 24 that bitcoin had reached a major low on Dec 15, 2018 after much thought as detailed in the piece. I came to this conclusion on the basis of my metrics which have, so far, called every major top and bottom in bitcoin since 2011. In addition, I started to send out reports on Mar 1, 2019 on individual cryptocurrencies which looked actionable.]

Note that after clearing the 200-dma on the daily chart it has become very volatile, which is not unusual since it tracks Bitcoin, its underlying crypto-currency, which is itself quite volatile. The question becomes how to handle GBTC if one bought near our original suggested price between 4.60 and 4.80 and was in it when it posted the buyable gap-up on April 2nd. Obviously, the volatility over the past several weeks has been quite sharp, with GBTC trading within a 25% price range. 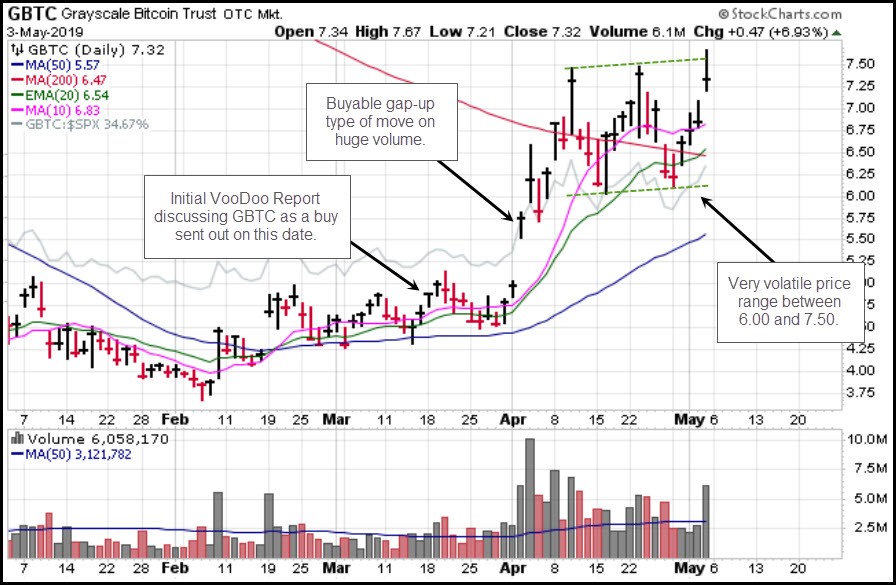 One simple way to handle this is to simply sit tight as long as it holds above the 5.52 intraday low of the April 2 BGU day. Otherwise, we can see on the daily chart, above, that it doesn't seem to find much in the way of support along its 10-dma, 20-dema, or even its 200-dma. However the weekly chart below reveals that GBTC has obeyed quite well its 40-week moving average. So, another way to handle this is to simply eliminate much of the day-to-day volatility and instead focus on the action seen on the weekly chart. In this case, as long as GBTC holds above the 40-week line then it remains a hold. 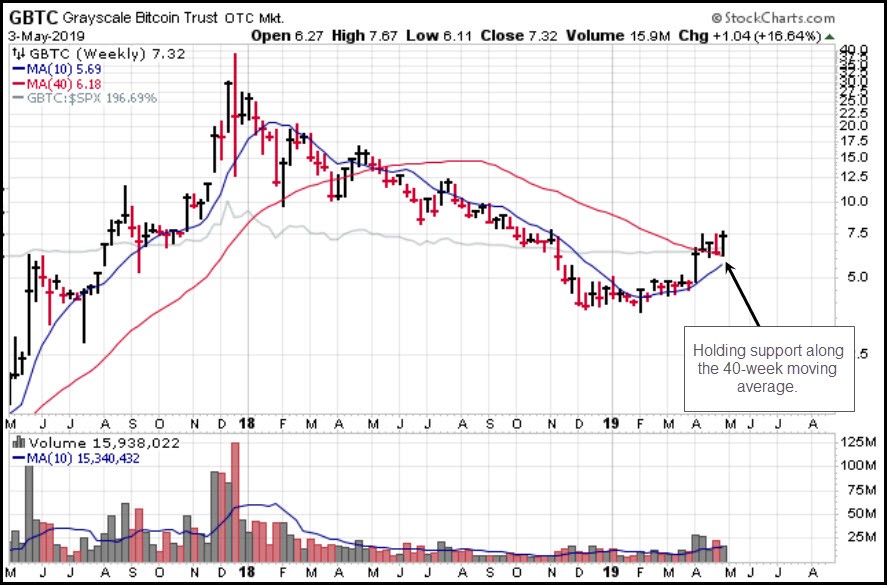 Since the breakout through $5 by the GBTC on April 2nd, it has rallied to a peak of 7.67, representing a gain of 53.4%. At the same time, BTC/USD has gone from $4200 to a peak of $6200 for a gain of 47.6%. So GBTC has been outperforming Bitcoin itself by a small margin, although BTC/USD looks as if its uptrend has been more persistent lately as the GBTC premium to Bitcoin has contracted. We can see Bitcoin consolidating in here at any point, but for now the trend remains to the upside after some heady gain since I first wrote my March 18th VooDoo Report detailing GBTC as a buy at that time. [Dr. K comment: GBTC tends to outperform BTC during uptrends and underperform BTC during selloffs.] 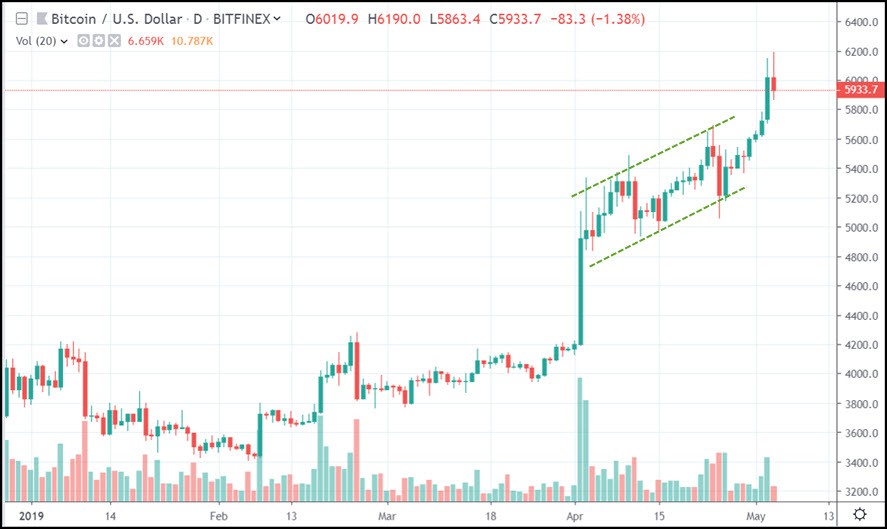