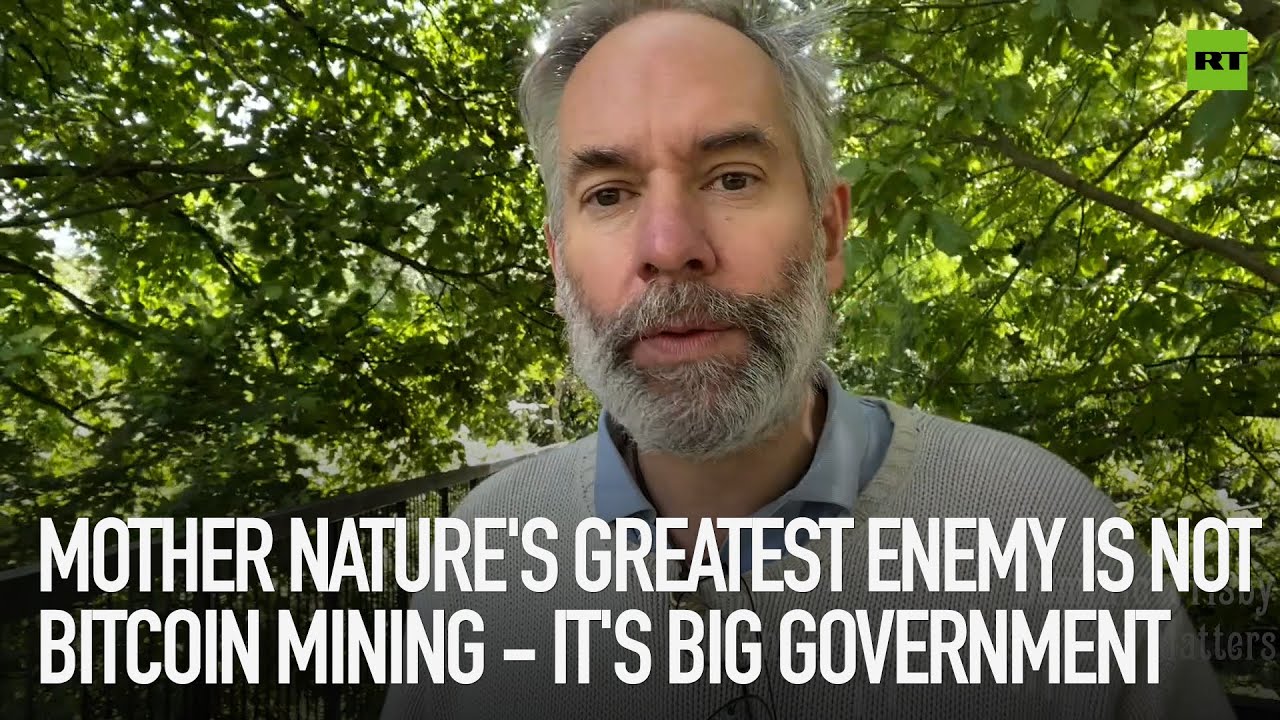 The Metaverse turns human beings into digital avatars on its landscape. Issues such as global warming become non-issues as people spend more time on their laptops, mobile phones, and AR/VR devices from the comforts of home. General travel and commute time to and from work is greatly diminishing as virtual meetings become the standard whether this be between business colleagues, friends, or relatives. Cryptotechnologies including DeFi and NFTs which improve existing efficiencies by orders of magnitude greatly reduce the costs of transactions, value transfer, and legacy banking, while pushing the countless unnecessary middlemen into areas with greater utility. If you look back a century, new technologies replaced old jobs. Those made redundant retrained thus a more productive use of their time was the end result.

Bitcoin has been grossly mischaracterized in terms of its energy usage as I have discussed in prior reports. Nevertheless, misinformation often guides regulatory policy so we must prepare accordingly. Bitcoin is actually more environmentally friendly than companies such as Tesla. Tesla takes power off the grid while more than half the grid is not renewable energy. So even though your car is green, the energy in various components of your car such as the battery of your car is produced by non-renewables such as coal and natural gas.

Bitcoin is about 76% renewable globally, and multi-billion dollar crypto companies such as Celcius have invested in companies that are fully renewable using hydro, solar, or wind power, or they buy carbon credits for the portion that is not renewable. Nevertheless, much FUD surrounds bitcoin which is akin to times past when bitcoin was incorrectly labeled as a primary tool for money laundering or arms trafficking or terrorist activities.

In connection with this, the dollar is being weaponized. China is spending over $1 trillion on its Belt and Road Initiative which will keep out bitcoin and the dollar while requiring the use of its own centralized digital yuan. Other countries such as Iran no longer accept U.S. dollar while Russia says it has completely removed the US dollar from its $185 billion dollar wealth fund, replacing it with assets denominated in euros and gold. The aim is to be more independent under the specter of sanctions.

Meanwhile, countries such as Argentina and El Salvador use the dollar as well as bitcoin. Millions of unbanked become banked with bitcoin. Bitcoin narrows the great divide between third and first world countries.

We will see a tug-o-war between countries when it comes to using the dollar, native fiat, bitcoin, and/or centralized digital currencies. Those that integrate cryptocurrencies into their ecosystems will benefit over those that don't due to the massive efficiencies and cost reductions that bitcoin and crypto bring to legacy banking, supply chains, and a host of other platforms. As one example, China's move to ban bitcoin mining is what Michael Saylor calls a trillion dollar mistake, and has resulted in Chinese miners moving offshore, making bitcoin mining even more decentralized, an overall benefit to bitcoin.

China believes it can slowly quash bitcoin and control the method in which its citizens transact value by way of authoritarian measures. Of course, it hasn't stopped wealthy Chinese from moving millions of dollar equivalents outside of China, well beyond the government's $50,000 maximum.

Centralized digital currencies bring the benefit of more efficient transactions and transparency. China's plan is force integration of its digital yuan as a replacement to other forms of value through its Belt and Road Initiative. But this digital form is no better than its traditional yuan in terms of future value as both can be easily debased by the Chinese government. They can also affect one's rate of interest if their credit or social score changes. Imagine seeing a negative rate of interest on your savings whereby the balance in your account drops each day. Bitcoin on the other hand is decentralized, out of the reach of government manipulation.

Due to all of the above, the future may very well bring two types of bitcoins. Institutions would market their bitcoin as the pure kind that passed KYC, not having traveled through problematic countries such as North Korea, so they have a clear history. Plus this clean type of bitcoin would have been mined using renewable energy sources. Depending on how far they get, this type of bitcoin could trade at a premium or a discount to normal bitcoin. Bitcoin HODLers may desire this type of bitcoin as its value may be better insulated against regulatory laws and other political outcomes. On the other hand, normal bitcoin is fluid so global demand may continue to push it ahead of clean bitcoin resulting in a higher price over clean bitcoin. Time will tell how this all plays out. The price/volume charts, of course, are always the final judge and have always been an excellent way to stay on the right side of the markets.

Will the Real Inflation Please Stand Up?

Inflation has been soaring if history is any guide. In this Era of QE, bitcoin, stocks, and hard assets have been the prime beneficiaries. As we all know, the CPI is government manipulated. It is one of the worst measures of real inflation. Things that rise in price too quickly are removed from the CPI's basket of goods. Free market forces show that technology such as laptops, software, and mobile phones typically obey Moore's law, so while the technology improves by orders of magnitude over time, prices stay relatively constant. With a depreciating dollar, this simply means that the cost of technology substantially drops over time. A high end Apple Computer in 1983 cost $2000. An equivalent computer in today's world costs about the same. In terms of affordability, with fiat being debased over time by central banks, buying power markedly weakens over time. So with prices staying relatively constant in terms of the costs of various technologies, this has a massively suppressive effect on the CPI. Meanwhile, skyrocketing rises in the price of essentials such as hospital and medical services, college tuition, food, and housing push overall inflation to +54.6%. Yet monetary policy is determined by overall CPI which is claimed to be only a couple percent, artificially held down by the material cost reductions in technology. 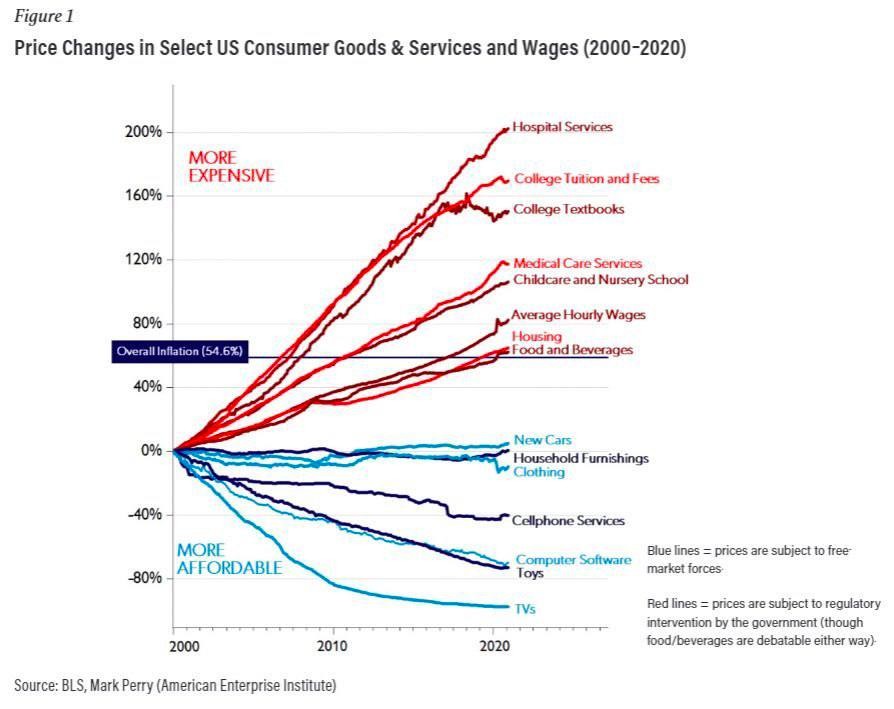 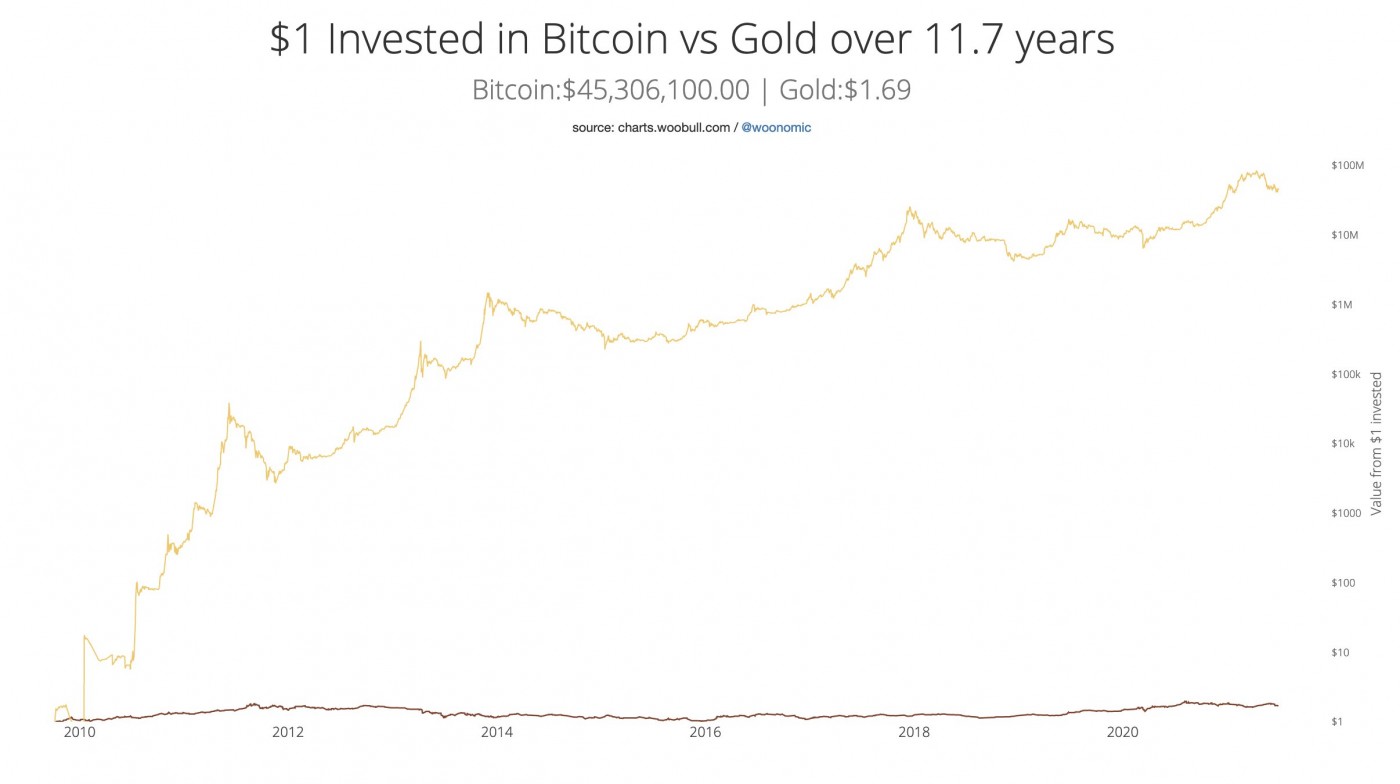